“I never liked the circus,” Tim Burton admits, “but I like the idea of it.”

That is why Burton, a self-described “weirdo,” wanted to direct and produce the live-action reimagining of Disney’s animated classic Dumbo (in theaters March 29). Producer Ehren Kruger, who wrote the screenplay, had been a fan of the peculiar pachyderm since childhood, and like Burton, he was eager to extend Dumbo’s story beyond the original movie’s 63 minutes. “For me, it’s a very personal experience of wish fulfillment,” he says. “Dumbo’s not just a Disney character; he’s a mythological character. I wish he were real and I wish I could have been in the audience in the golden age of the circus to observe his story.” So, Kruger let his imagination soar, wondering what it’s like to be Dumbo and whether the 1941 film had a “truly satisfying” finale. Such questions, he says, “led to expanding the story past where the animated film ends.”

Dumbo is a mascot for anyone who feels different, which is why the cast and crew love him so. “Everyone sees themselves in the story of a character who has self-doubt, who has flaws, who is defined as one thing but is something else, and has this ‘mouse’ inside them saying, ‘Maybe you’re more than that. Maybe that negative is a positive,’” Kruger explains. “We worked very hard to create a menagerie of human characters, a circus family, around Dumbo, who all in some way are wrestling with uncertainty about themselves and their place in the world… so that Dumbo could be, for each one of them, an inspiration—like he is to audiences worldwide.” 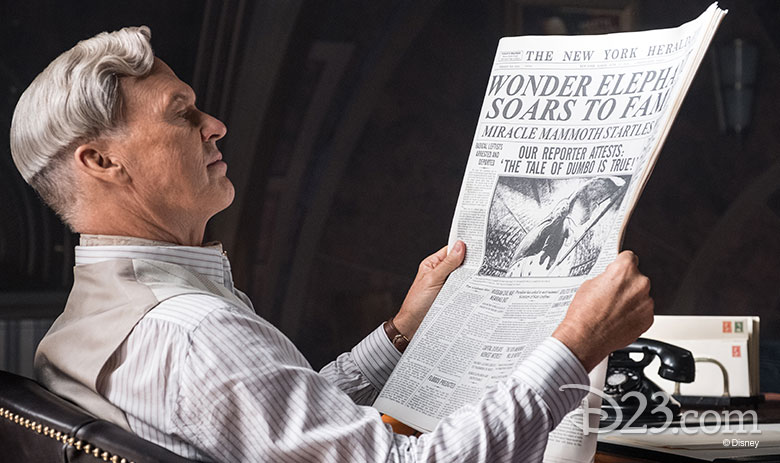 “I think he’s brilliant. I think he’s just a genius,” DeVito, who plays a circus ringmaster, says of Burton. “His artistry is astounding. You get a person like Tim and a subject like Dumbo… and what does he do? He sends it off into the stratosphere! He’s one of a kind. He’s just amazing!”

Burton, who directed Disney’s Alice in Wonderland and Frankenweenie, and produced  The Nightmare Before Christmas for the studio, identified with Dumbo from the get-go. “The old Disney movies had all these elements… everything,” he says, noting their themes of joy, humor, and tragedy. “So, for his version of Dumbo, “We tried to present these things without overdoing it—in a fable-like way.”

It also helped that technology “had reached a point where you could successfully render an elephant in a live-action environment,” Frey explains. Because more than anything, “Dumbo is one of the original outsiders, in a way, and Tim’s films are populated with outsider characters.” 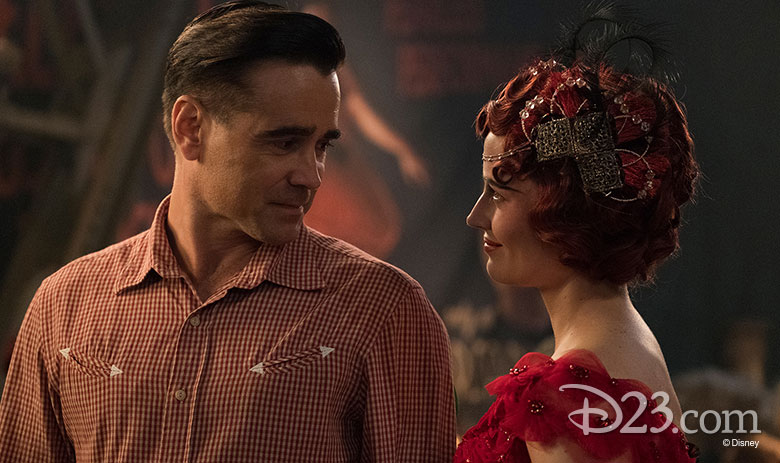 “The biggest challenge, I guess, was you have all these people, [all these] amazing sets… and the only thing that’s missing is the main character,” the director admits. “That’s a very, very unnerving thing to be going into something and you know what you want, you know what you’re going for, you can see rough animation—but until it materializes, you just don’t know.”

The end result is a testament to the post-production team, who rendered Dumbo’s image onscreen, as well as actor Edd Osmond, who was occasionally called on to stand in for the title character on set. “He looked like a green insect, because he had this green suit on an extended leg,” Burton says of Osmond. “It was amazing, because he’d actually studied the elephants and their movements.”

Every character in Dumbo “is trying to find their place in the world,” according to Burton. Farrell says Holt, for example, “feels disenfranchised from a life he left behind” before the war. Now maimed and widowed, everything is “completely different” when he returns to the circus and his children. “My character’s journey is one in just accepting his position as a father and how that means all he really has to do is get out of his children’s way and let them be who they are.” 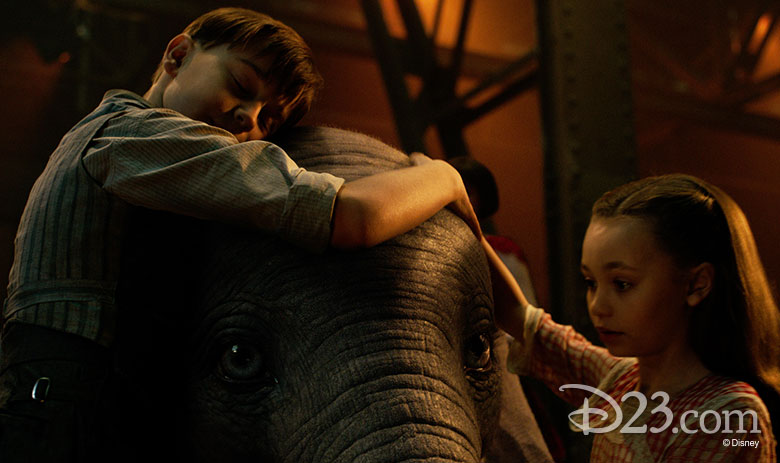 Parker and Hobbins both make their film debuts in Dumbo—but according to their onscreen father, the duo acted like veterans. “No shepherding needed,” Farrell insists. “Nico would be like, ‘Colin, you’re two feet off your mark!’” Giggling, Parker confirms, “That was true. He was!”

Green, meanwhile, spent two months training to be an aerialist. “I was petrified of heights—like a real phobia,” she admits. “But thanks to Mr. Tim Burton, I’ve overcome my fear.” Under the direction of her stunt double, the “very patient, very kind” circus performer Katharine Arnold, Green became stronger, mentally and physically, to become the dazzling performer audiences see onscreen. “Little by little, I went higher and higher,” Green recalls. “And that was amazing!” 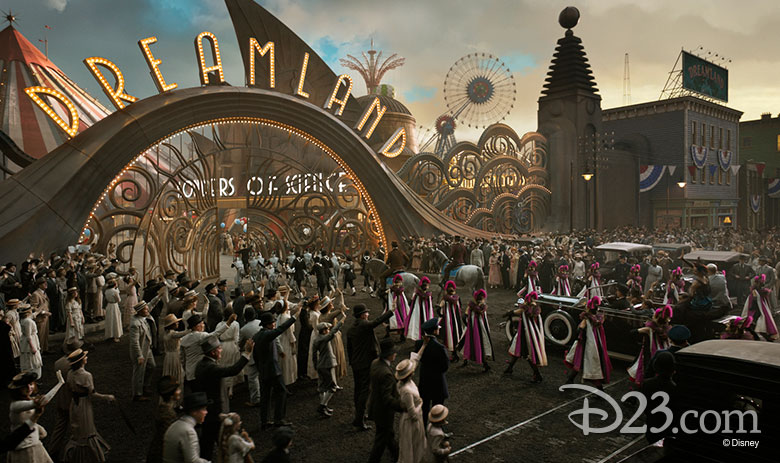 Burton relied heavily on his crew to give Dumbo a heightened sense of reality. Atwood, for example, estimates she managed costumes for 500 people a day for months. “The one thing that is really amazing about this movie is that so much of it is real,” Atwood, a four-time Oscar® winner, says. “When you’re in the room with all that going on, you realize you’re in a really magical, very rare place that you might not ever be [again] in your life.” Heinrichs, who has known Burton for more than 20 years, built practical sets on London soundstages whenever possible. “Every movie I’ve worked with Tim on has been an adventure unto itself,” says Heinrichs, who’s also an Oscar winner. “There is a shared visual shorthand… It’s always a blank canvas you start with. It feels dangerous and exciting and challenging, and Dumbo was certainly no different.”

In every regard, Heinrichs recalls, “We wanted that special something that hallmarks a Tim Burton film of stylization and caricature and satire and pushing the envelope… Tim’s a big believer in getting as much on camera as possible, and we definitely tried to do that for him.” 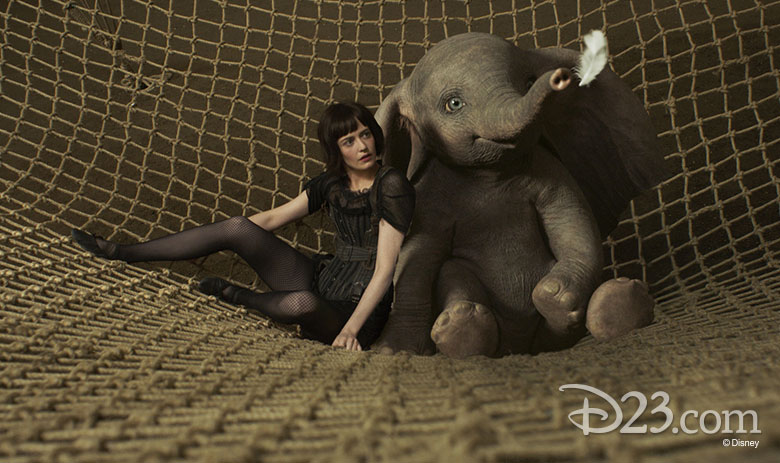 Dumbo marks the 17th film collaboration between Burton and Elfman—but unlike Heinrichs, the composer says he still hasn’t figured out what makes his friend tick. “People think, ‘Oh, you must have a shorthand.’ Or, ‘It’ must be really simple.’ And I go, ‘No, actually, working with Tim is a lot less simple than a lot of other directors.’ His mind is strange and interesting, and I learned many years ago never to take for granted what I think he’s going to want,” Elfman says. After a quick spotting session, in which they watch a rough cut of the film and break down its musical moments, Elfman gets to work. “Usually it’s something we find in process,” he says. “I think it’s a good way to work, actually, because if directors say what kind of music they really, really want, it usually ends up being not at all what I’m imagining. It’s better just to talk about, ‘How do you feel about the movie?’ It’s like, ‘Start there and see where we go.’ It’s all mystery.”

Expect musical and visual nods to the original Dumbo, from Casey Jr. Circus Train to “Pink Elephants on Parade” and “Baby Mine.” In deciding what to include, Kruger says, “I really tried to get to the place of, ‘What are the simple things that I associate with this story? Those have to be there.’” 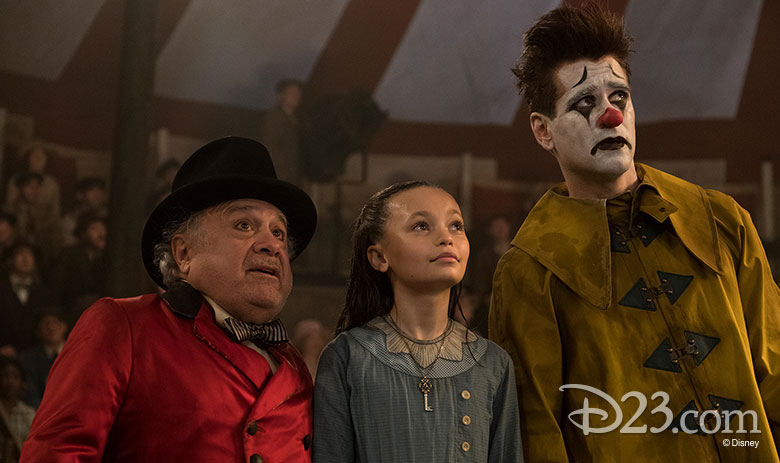 As is true of the animated film, Dumbo doesn’t speak in Burton’s adaptation, either. In fact, none of the animals do. “We wanted to transport an audience to Dumbo’s circus world, and that meant that it needed to feel real,” Kruger says. “So, early on we made a decision to not feature talking animals. The most important character in the animated film, Dumbo, doesn’t speak; Mrs. Jumbo, I think, has one or two lines, and that’s it. So, that felt organic to this story, to let Dumbo be a classic Charlie Chaplin, Buster Keaton-esque expressive silent-film performer and make the circus around him feel real. There were moments when we thought, ‘Wouldn’t it be nice to have Timothy Mouse talk? He’s so cute.’ We just didn’t want to break the spell.”

However, Springer adds, “I feel like these movies run on parallel tracks, so you can imagine Dumbo’s conversations with Timothy Q. Mouse are happening onscreen—in between scenes.”