It’s been 50 years since Walt Disney World first opened to the public on October 1, 1971. In the months leading up this milestone anniversary, many employees from across The Walt Disney Company have asked the Walt Disney Archives to search our collection for vintage merchandise, graphic designs, and ephemera to serve as inspiration for the cast members, executives, designers, and communicators who are excitedly working to promote “The World’s Most Magical Celebration.” Luckily for those employees, the Archives’ collection of Walt Disney World materials was set up for success decades ago thanks to the foresight of Disney Legend and Archives founder Dave Smith.

In June 1970, a full year before the opening of Walt Disney World, the Walt Disney Archives was established to collect, preserve, and make available the history of The Walt Disney Company along with the life and legacy of Walt Disney. By that point, the company was almost 50 years old, which presented Smith with the challenge of trying to track down many years’ worth of content such as vintage Disney merchandise, posters, correspondence, publicity materials, artwork, and memories from people that had worked alongside Walt Disney. Fortunately for Smith, setting up a collection of materials from Walt Disney World would be an easier endeavor considering the resort was still under construction and there was ample access to a plethora of people working on the project. Thanks to Smith’s diligence—and the Company’s commitment to support the Archives whenever possible— an unparalleled amount of early Walt Disney World history began pouring into the collection. Today, we are excited to share some examples of these early pieces of history that originate from October 1971.

The Grand Opening Spectacular and Dedication of Walt Disney World took place from October 23 to 25, 1971—a full three weeks after the resort opened on October 1, 1971. For three days, invited guests were able to partake in multiple galas, dedications, and receptions in honor of the newly opened “Vacation Kingdom of the World.” As a result, ephemera and other specially created mementos were produced by The Walt Disney Company and given to that weekend’s attendees. Unsurprisingly, many of those keepsakes distributed some 50 years ago were either discarded, lost, or damaged over time. Ephemeral objects are often among the hardest items for the Archives to track down given their inherent disposable nature. While it’s common to see photographs, film footage, or newspaper clippings captured during that weekend’s events, it’s certainly a rare treat to see near-pristine examples of the tactile artifacts that were given to the invite-only crowd and participants. 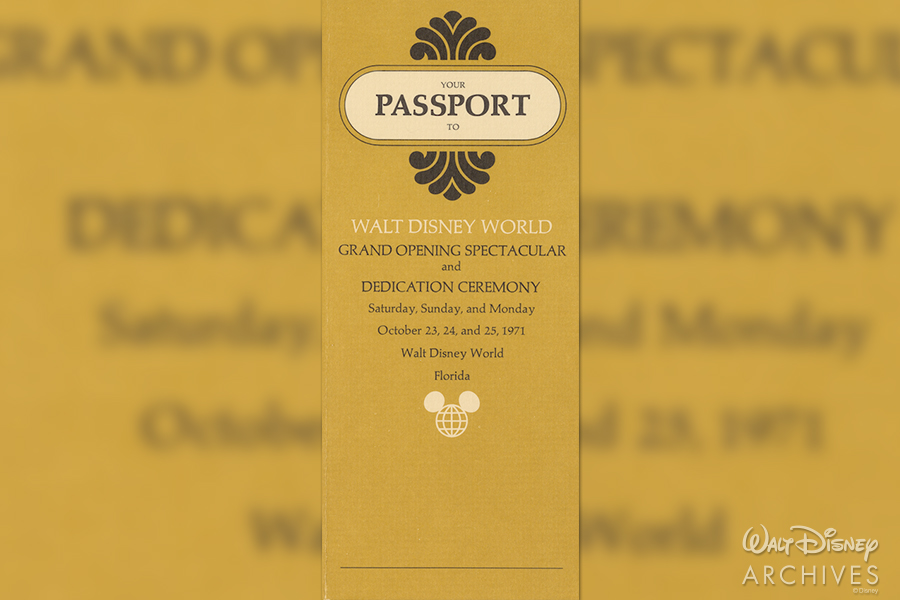 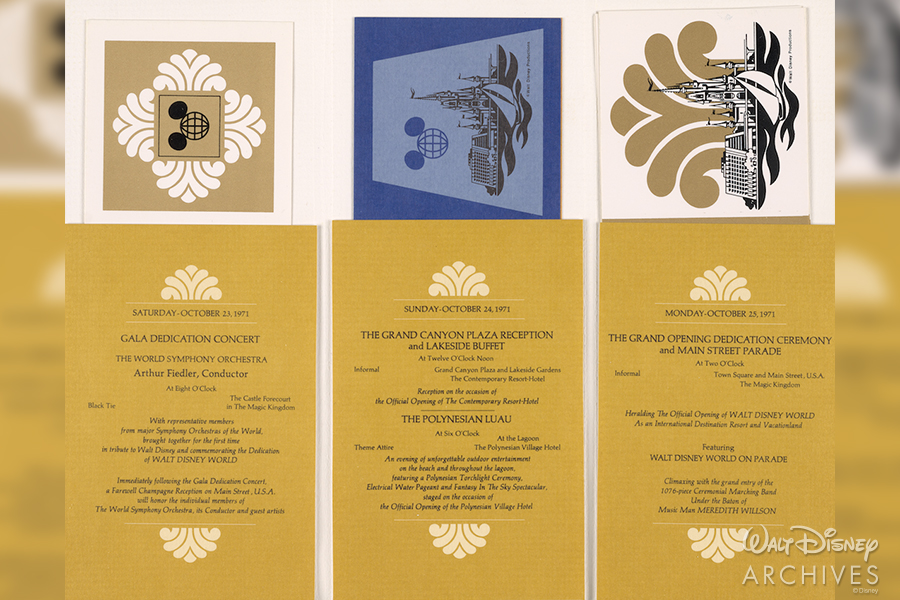 Participants who RSVP’d for the three-day Grand Opening of Walt Disney World were given a “Passport” folder containing specially designed tickets granting access to each event. The second day’s festivities had two separate tickets, with the blue colored ticket in this photo covering the other ticket placed behind it.

Day I—October 23: The World Symphony Orchestra, under the direction of renowned conductor Arthur Fiedler, performed a nighttime concert in front of Cinderella Castle. According to the program given to participants, The World Symphony Orchestra was “…brought together under the auspices of the Federation of People-to-People Programs to affirm the universal meaning and worldwide heritage of symphonic music.” The orchestra was made up of over 140 musicians from 63 nations, 30 states, and the District of Columbia. In the span of only four days, the group performed at Lincoln Center in New York City, Walt Disney World, and the John F. Kennedy Center for the Performing Arts in Washington, D.C. 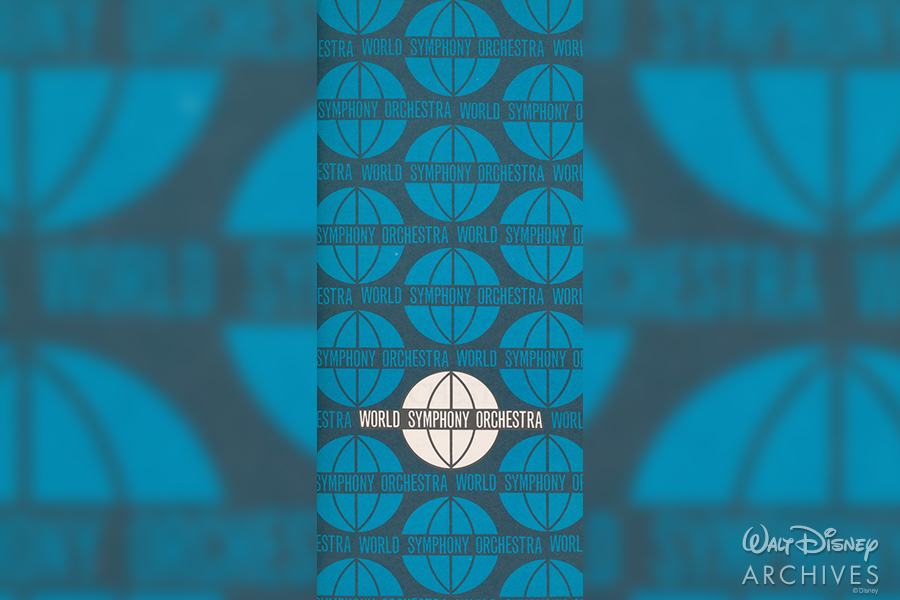 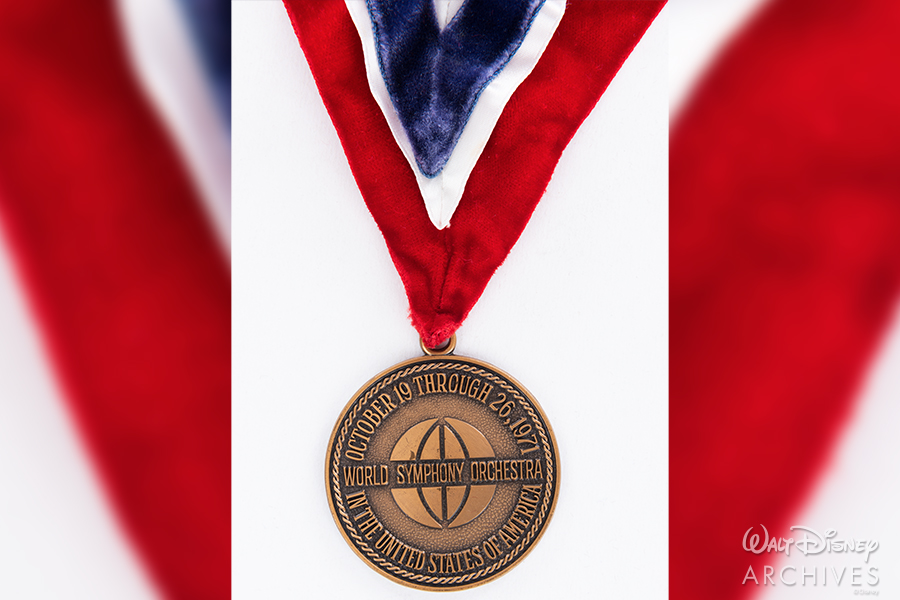 Day II—October 24: The official opening of the A-frame shaped Contemporary Resort Hotel, featured master of ceremonies Bob Hope. After fanfare of the event subsided, the gathering later dispersed for a luncheon buffet on the lagoon side of the hotel, hosted inside a striped tent along the shores of Bay Lake. “American Food Festival” was the theme, with dishes from New England, New Orleans, and the West, along with desserts from Florida.

Later that evening saw the official opening of the other original site for Walt Disney World accommodations, the Polynesian Village Hotel. More than 1,000 invited guests took to the sandy beaches along Seven Seas Lagoon for a dazzling evening that included a Polynesian luau, torch lighting ceremony, Tahitian dancers, the debut of the Electrical Water Pageant, and a thrilling conclusion capped off by the Fantasy in the Sky Spectacular fireworks. Former Florida Governor Claude Kirk commented on the night’s affairs by saying, “Just another typical Florida night that could never be duplicated in California.”

Day III—October 25: The Grand Opening Dedication Ceremony was the finale for this whirlwind weekend. A 1971 informational flyer issued to cast members described the day’s programming: “Prior to the ceremony at 2:00 p.m., will be a 1,100 voice chorus from the high schools and colleges of Central Florida and 100 piece University of Florida Band directed by Richard W. Bowles. The dedication ceremony at 2:30 p.m. will be highlighted by the reading of a plaque by Roy O. Disney in tribute to the philosophy and life of Walt Disney. The Walt Disney World On Parade will be climaxed by the grand entry of the 1,076 piece Ceremonial Marching Band under the baton of ‘Music Man’ Meredith Wilson [sic]…” 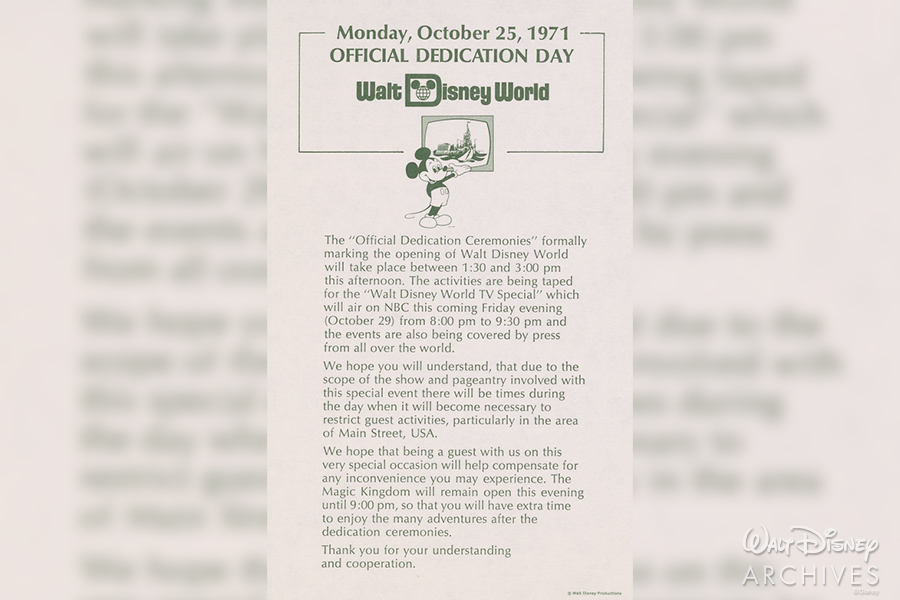 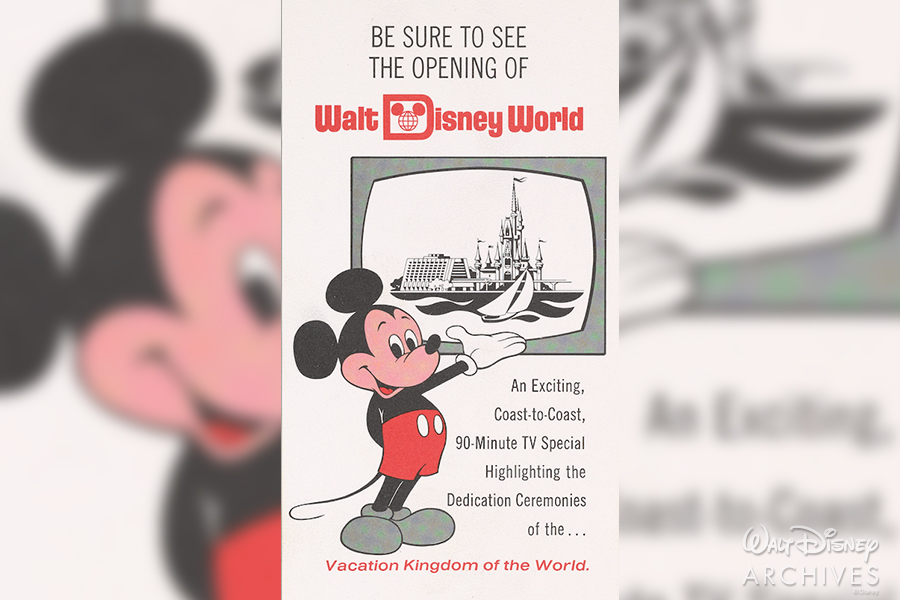 NBC cameras were on hand capturing footage from the various Grand Opening festivities for inclusion in the 90-minute television special The Grand Opening of Walt Disney World. The program, which aired later on October 29, 1971, was hosted by future Disney Legend Julie Andrews and featured a cadre of celebrity performers dancing, prancing, and yucking it up around the resort. 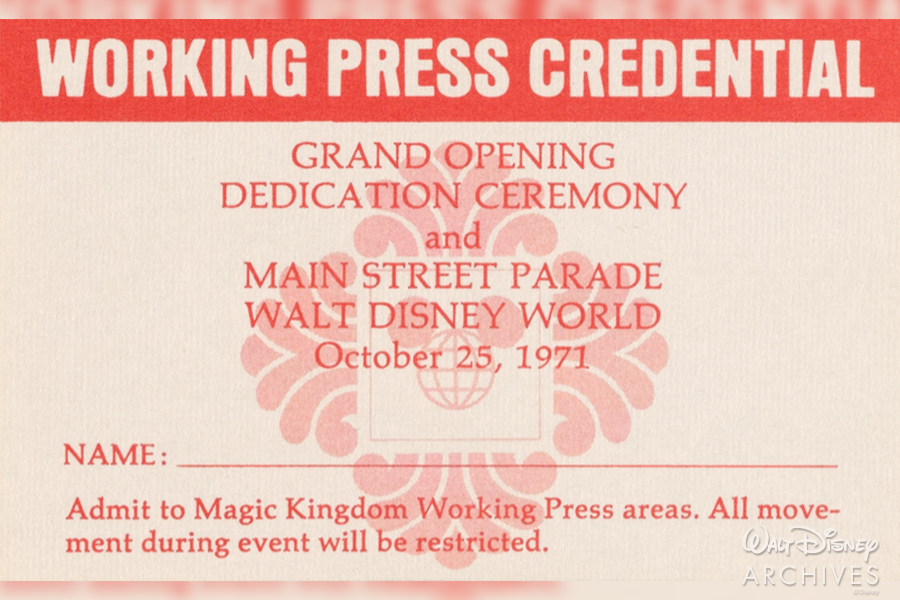 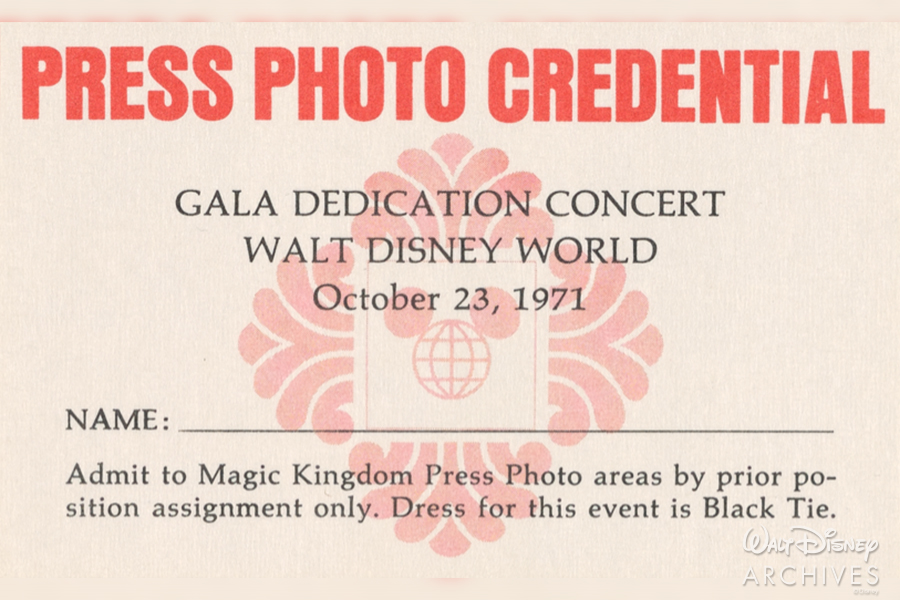 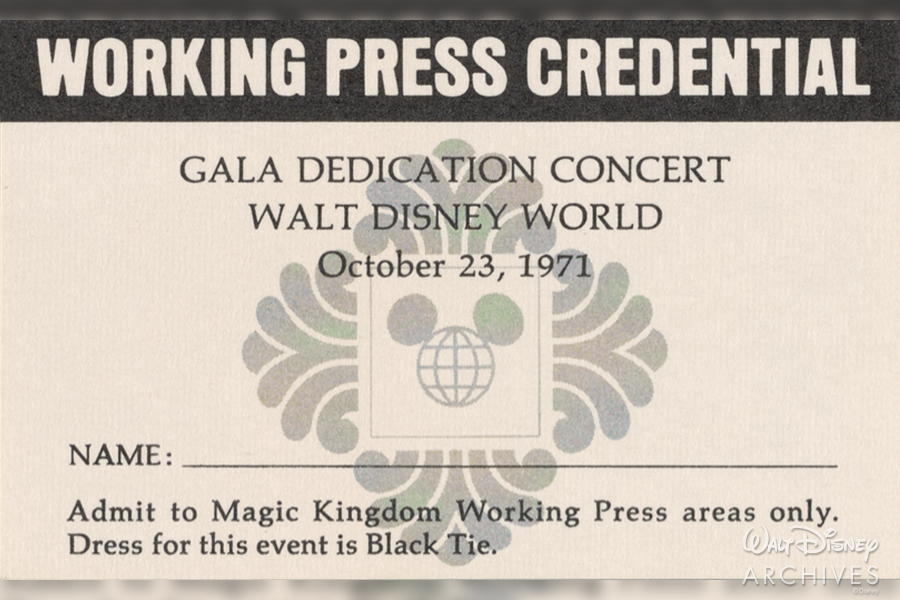 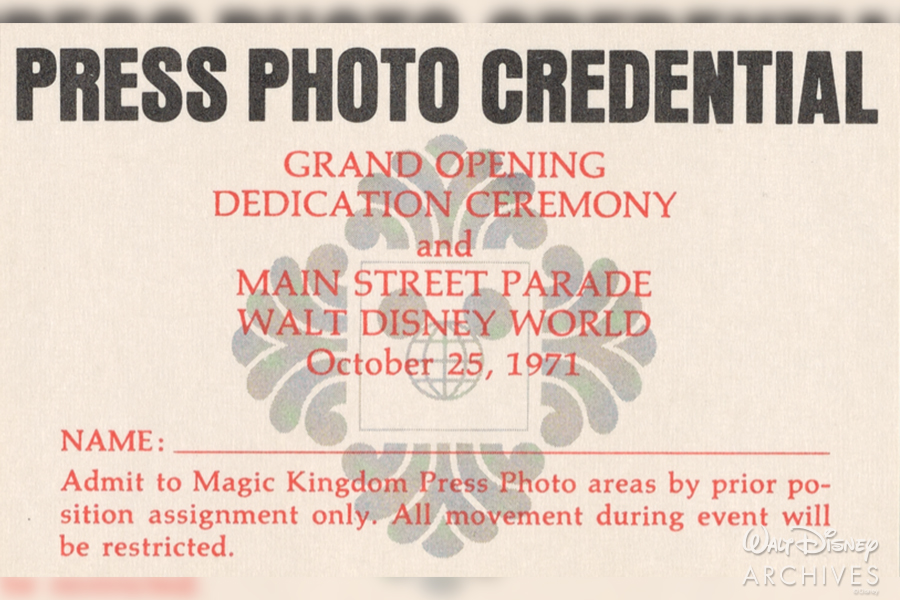 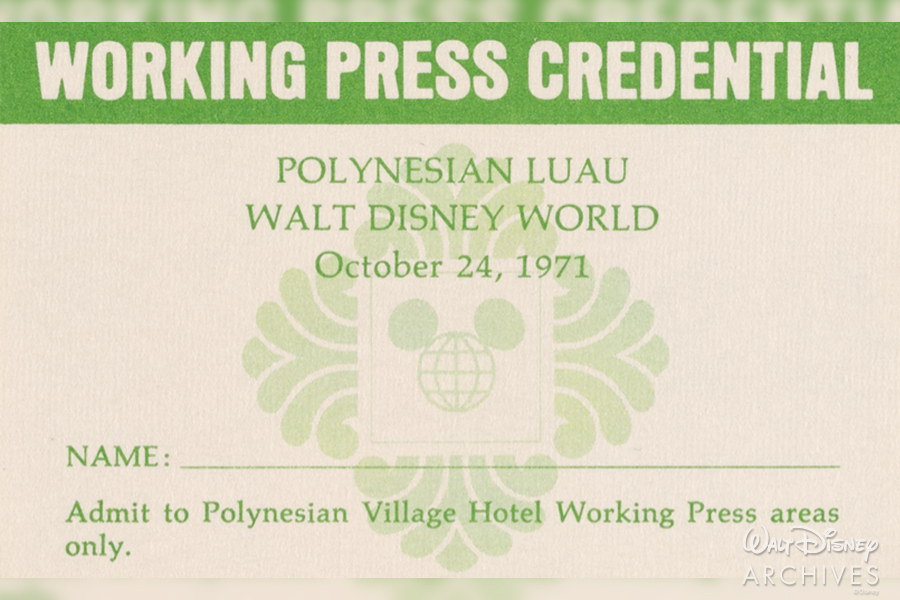 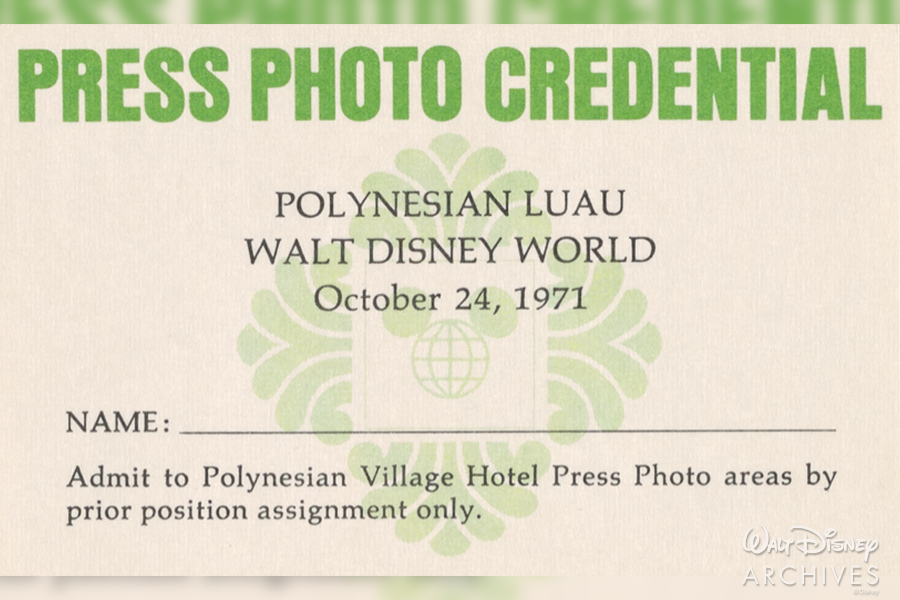 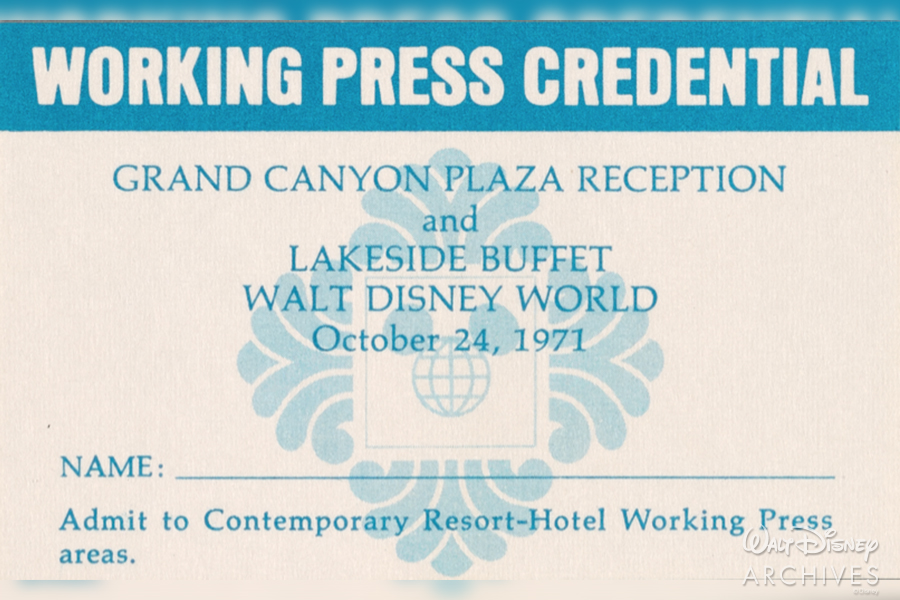 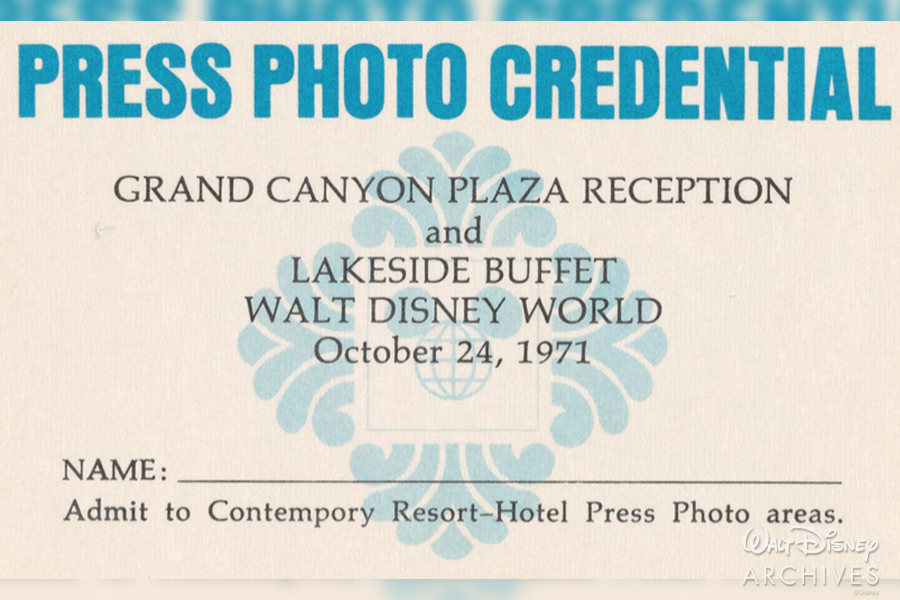 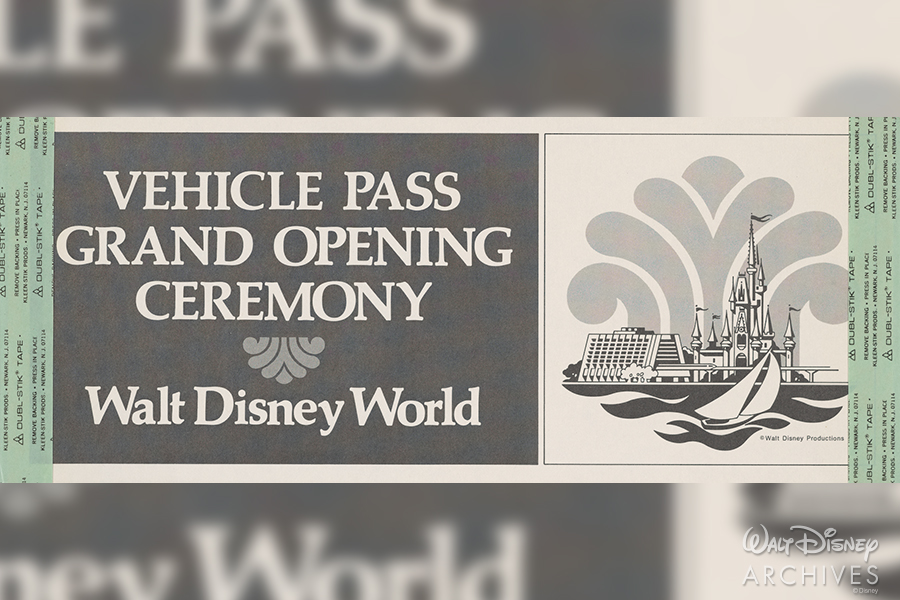 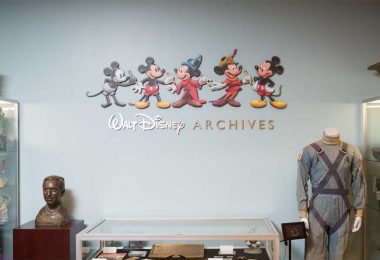 JUST ANNOUNCED: Adventure Thru the Walt Disney Archives Heads to Disney+ This November 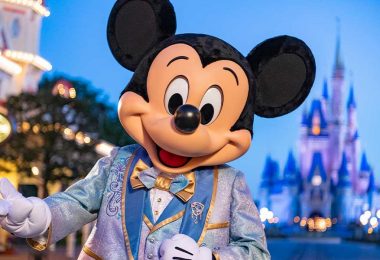