What if Wonderland was in peril and Alice was very, very late?

That’s the premise of Unbirthday, the next chapter in the popular A Twisted Tale novel series from Disney-Hyperion. Written by one of our favorite authors, Liz Braswell, the young adult novel will be available on September 1, 2020. As we wait for that very important date, D23 is proud to exclusively reveal the cover of Unbirthday: A Twisted Tale.

Alice is different than other 18-year-old ladies in Kexford, which suits her just fine. She’d rather spend golden afternoons with her trusty camera or in her aunt Vivian’s lively salon, ignoring her sister’s wishes that she stop all that “nonsense” and become a “respectable” member of society. Alice is happy to meander to Miss Yao’s teashop or to visit the children playing in the Square. She’s also interested in learning more about the young lawyer she met there—but just because she’s curious, of course, and not because he was sweet and charming. But when Alice develops photographs she has recently taken about town, familiar faces of old suddenly appear in the place of her actual subjects—like the Queen of Hearts, the Mad Hatter, and the Caterpillar. There’s something eerily off about them, even for Wonderland creatures. And as Alice develops a self-portrait, she finds the most disturbing image of all, a badly injured dark-haired girl asking for Alice’s help: Mary Ann. Returning to Wonderland, Alice finds herself on a mission to stop the Queen of Hearts’ tyrannical rule and find her place in both worlds. But can she do it before the end of time?

Before we dive into Unbirthday: A Twisted Tale this fall, enjoy this Q&A with Braswell:

D23: This is about if Alice was very, VERY late. How late are we talking?
Liz Braswell (LB): Over a decade, 11 years, to be exact! On Alice’s Unbirthday anniversary of her first trip to Wonderland, her old friends beg her to return and save them all from the of the Queen of Hearts, who has rampaged destructively across Wonderland with her card army since Alice left.

D23: This series is now a New York Times Bestseller! Why do you think these Twisted Tales resonate so deeply with people?
LB: All of these Twisted Tales reimagine and reframe not only the Disney movies which people love, but also the stories the movies were based on. They resonate because however you watch, see, listen to, or read fairy tales, they are a culture’s tradition and imagined history… and sneakily didactic, teaching lessons through fiction that might not sink in otherwise.

D23: What was your favorite part about getting to write this twisted take on Alice in Wonderland?
LB: Everything! This was a super fun ride and I was honored to contribute to the world of Alice stories. There’s a quote somewhere I need to find about a certain kind of girl always imagining herself as Alice… that was me as a child. In college I visited my friend Katherine at Oxford and spent all of my time visiting every Alice hot spot: Christ Church College, Alice’s Shop, the park with the adorable deer…

D23: Were you able to incorporate elements from the original novels, animated film, or the live-action films?
LB: I stuck mostly to the animated movie when writing this, especially visually, but there are definitely homages to the original books—both books! And some sneaky references to the real world of Charles Dodgson, which clever readers may catch.

D23: Who is your favorite Alice in Wonderland character?
LB: Don’t make me choooooose! Probably the Hatter? Cheshire has his charms. And I kind of always did like loves.

Q&A with the Author of So This Is Love, A Cinderella Twisted 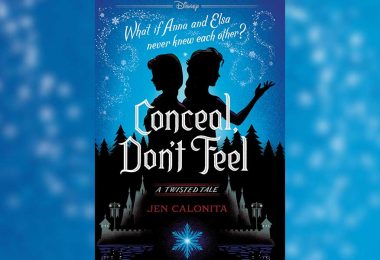