Home / News / Headlines / EXCLUSIVE: Gonzo Wants to Dress as a Princess in Muppet ...

Being yourself is always in fashion.

Gonzo (voice of Ben Diskin) learns that lesson in a brand-new episode of Disney Junior’s Emmy® Award-nominated series Muppet Babies, airing tonight at 5 p.m. ET/PT. In the Muppet Babies’ imagination sequence, Gonzo wants to dress as a princess for the Royal Ball, just like Piggy (voice of Melanie Harrison) and Summer Penguin (voice of Jessica DiCicco)—all while the other boys, including Kermit (voice of Matt Danner), Fozzie Bear (voice of Eric Bauza), and Animal (voice of Dee Bradley Baker), plan to dress up as knights.

According to the princess handbook, only girls can wear princess dresses, while boys must dress like knights. Luckily, Rizzo the Fairy RatFather grants Gonzo’s wish and gives him a magical gown so no one will suspect it’s him! At the Royal Ball, Gonzo helps Piggy and Summer see that doing things a little different can be fun, inspiring him to tell his friends the truth. Before tonight’s episode debuts on Disney Junior, watch an exclusive clip below:

So, what inspired the episode, titled “Gonzo-rella”?

“Very early on, we wanted to do an episode where Gonzo just showed up to the Playroom wearing a skirt. And it was no big deal. No one cared or questioned it because Gonzo is always 200% Gonzo 347% of the time,” says Muppet Babies executive producer Tom Warburton. “But then story editor/co-producer Robyn Brown and her team wanted to take it a step further and do a Cinderella story based on the idea. And it was just SO wonderfully Gonzo. We hope he inspires kids watching to be 347% of themselves in their own way, too.”

Want more Muppet Babies adventures? The first three seasons are now streaming on Disney+, and episodes from the second and third seasons are available in the DisneyNOW app. 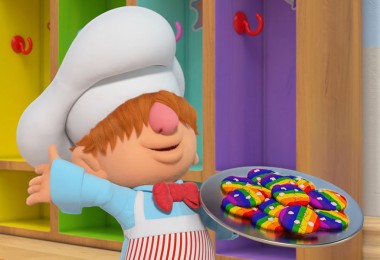