Home / News / Headlines / Don Cheadle Takes on the Most Challenging Role of his ...

There’s breaking news out of Duckburg, or rather, San Diego Comic-Con, where it has just been revealed that Oscar®-nominated actor Don Cheadle (Marvel Studios’ Avengers: Infinity War, House of Lies) is taking on another challenging role: Donald Duck. Cheadle will guest star in the DuckTales season finale, playing the intelligible voice of Donald Duck (the result of an inventive voicebox).

Cheadle said, “It’s an awesome opportunity because there are only so many roles that you look forward to playing as an actor. You’ve got to do your homework and bring your A-game when you’re trying to voice Donald Duck.” He may not be quacking his way through the episode, but the acclaimed actor went to great lengths to get into character and prepare to play the iconic duck, as you’ll see in the video below:

The epic, one-hour episode—titled “The Shadow War!”—will also feature Lin-Manuel Miranda (Broadway’s Hamilton, Disney’s Moana) reprising the role of Fenton Crackshell-Cabrera (aka Gizmoduck), Kimiko Glenn (Orange Is the New Black) as Lena, and Catherine Tate (Doctor Who) as Magicka De Spell—who is close to exacting revenge on Scrooge. Our favorite family of ducks must race against time to plan a dangerous rescue mission to save Scrooge and the city.

We’ll have to wait until Saturday, August 18 (9:30–10:30 a.m. EDT) for “The Shadow War!” but the DuckTales team has other tales of derring-do for us to enjoy ahead of that. Earlier this week, news broke that the beloved TaleSpin character Don Karnage will appear in an episode airing on Saturday, July 28 (9:30–10:10 a.m. EDT). Actor Jaime Camil (Jane the Virgin) will play the fan favorite in “Sky Pirates…in the Sky,” which finds middle child Dewey feeling ignored and inspired to look for a new family—a band of singing and dancing pirates who are looking to rob Scrooge blind. Camil, who appeared on Broadway in Chicago, will also perform “Sky Pirates,” an original song written and produced by Andy Bean (Muppet Babies).

A second season of DuckTales is slated to debut later this year, but you can watch the series daily on Disney Channel. DuckTales stars David Tennant as Scrooge McDuck; Danny Pudi, Ben Schwartz and Bobby Moynihan as Huey, Dewey, and Louie, respectively; Kate Micucci as Webby Vanderquack; Beck Bennett as Launchpad McQuack; and Toks Olagundoye as Mrs. Beakley. 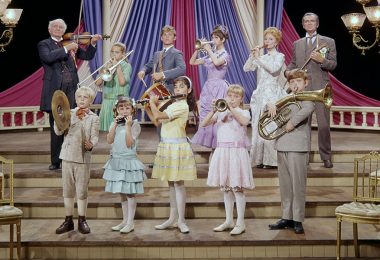 Did You Know? 9 Striking Notes About The One and Only, Genuine, Original Family Band