When it comes to Super Heroes, Spidey has a devoted fan base among preschoolers, but those young fans have never had a full-length TV series centered on their friendly neighborhood Spider-Man—until now, that is. On Friday, August 6, Marvel’s Spidey and his Amazing Friends premieres with a simulcast on Disney Channel and Disney Junior (9:00 a.m. EDT/PDT). The team behind the new animated series has embraced the philosophy of Peter Parker’s Uncle Ben, that “with great power comes great responsibility,” and they’ve carefully and lovingly created a show for young viewers that’s aspirational, filled with web-slinging action, and—most of all—fun.

Executive producer Harrison Wilcox and the creative team went back to the very beginning to study the Super Hero’s comic book origins. “We were able take a lot of inspiration from that. There’s a lot of joy, a lot of light-hearted storytelling from those early books, and that was sort of our foundation for how we built the series,” he shares. As in the comic books, the new animated series is set in New York City, and Marvel’s Spidey and his Amazing Friends follows Peter Parker, Gwen Stacy, and Miles Morales on adventures as the trio teams up with Hulk, Ms. Marvel, and Black Panther to defeat foes such as Rhino, Doc Ock and Green Goblin.

Like all of our favorite Super Hero stories, Marvel’s Spidey and his Amazing Friends reflects the world we live in. It’s inclusive, and the stories are based in a reality that young viewers will recognize. Lori Mozilo, vice president of Original Programming for Disney Junior, emphasizes, “You see them grounded in a very relatable world to kids and having very relatable problems.” Young fans will be able to envision themselves in the situations the beloved Super Heroes find themselves navigating in their “secret identities,” such as when Peter, Gwen, and Miles are having a sleepover and they balk when Aunt May insists they must go to sleep. And then, Mozilo says, the Super Hero element comes into play when a Spidey alert necessitates that the trio must fly off to save the day. “But it’s grounded in something that’s completely familiar to our audience,” she stresses. Bringing together the worlds of Marvel and Disney Junior was never an issue, Mozilo says, noting, “They’re both aspirational places, so that’s a very natural fit.”

Since its launch more than 10 years ago, the team at Disney Junior has learned a tremendous amount about what works developmentally and what kind of storytelling resonates with its preschool audience, and Mozilo believes the Super Hero world lends itself perfectly to the platform. There’s also an aspirational feeling for kids that comes with solving problems, figuring things out, and mastering new skills and ideas. 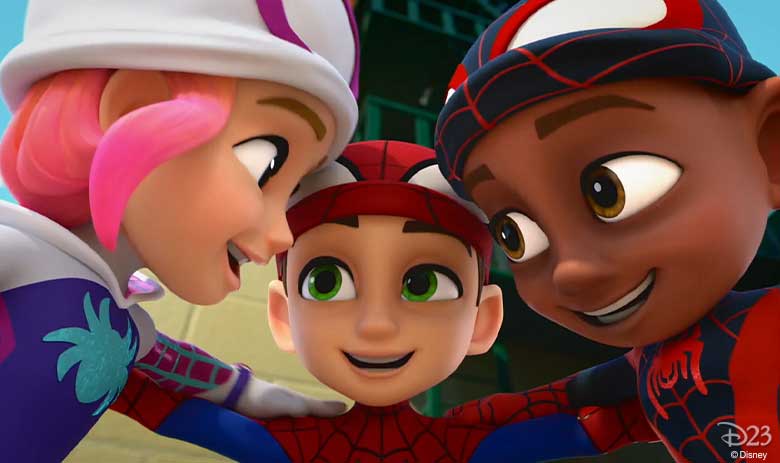 The emphasis in Marvel’s Spidey and his Amazing Friends is on the “friendly neighborhood” aspect of being a Super Hero, as Peter, Gwen, and Miles lend helping hands to those in their immediate vicinity. “We have plenty of adventures where the kids stop Doc Ock, Rhino, or Green Goblin from the dastardly villain plan of the week, but there are also adventures where they’re just helping people around the city, stopping problems, things like that,” Wilcox explains.

The three kids who comprise “Team Spidey”—Miles, Gwen, and Peter—are all unique and very different from one another. “Peter’s very much a scientist, Gwen’s a musician, and Miles is an artist. That lends itself to a lot of territory for us to explore with what sort of stories we could tell that would be relatable to 2–7-year-olds,” Wilcox explains, noting, “We always try to draw from a place of character and try to start and end the story with something going on with them personally—not necessarily as heroes, but as kids.” 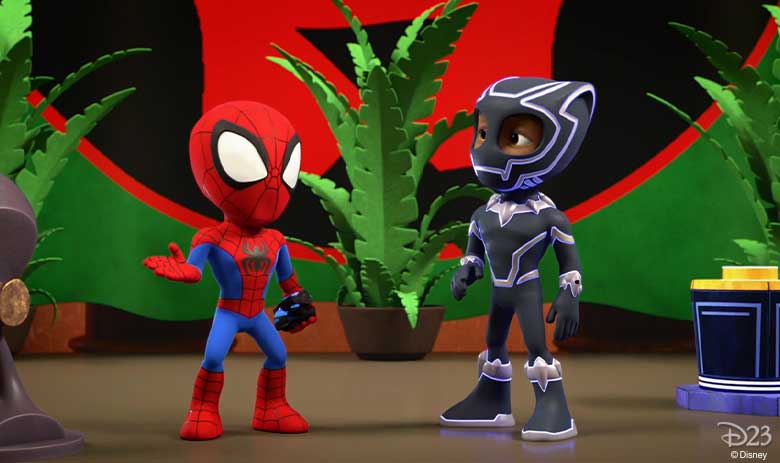 Where there are Super Heroes, there are usually super foes and Disney Junior considered very carefully what would work in the preschool world. When it comes to portraying villains in Marvel’s Spidey and his Amazing Friends, the emphasis is on behavior that’s “naughty” rather than diabolical. “[The villains] do things that I think preschoolers could identify as bad behavior,” Wilcox says, “And at the end of the day their villain plan is thwarted and they’re sometimes wrapped up in webbing, but their intent is more trickster-y than evil or malicious.”

The mischief makers in this first season of Marvel’s Spidey and his Amazing Friends are Doc Ock, Green Goblin, and Rhino. Mozilo shares that once the villains were chosen, the team considered, “OK, what are their wants? What are wants that would make sense in a preschool world?” Green Goblin, she explains, is determined to ruin a good time. “He goes to the park when everyone’s having a picnic and ruins the picnic. It’s a sunny day and he brings out a way to get everything wet.” Rhino lives to smash, and he’s also greedy… which leads to a bit of thievery. And Doc Ock is all about power and control. “Those drivers were simple enough to start driving stories,” Mozilo explains, from the jumping-off point of “Here’s the thing they want. Our Super Heroes are going to thwart them, and how do they do that?”

Team Spidey’s heroic efforts will be accompanied by a truly super soundtrack, thanks to Grammy® Award-nominated musician Patrick Stump, lead singer of the multiplatinum-selling rock band Fall Out Boy, who performs the theme song for Marvel’s Spidey and his Amazing Friends and also serves as songwriter and composer for the series. “That theme song, he knocked out of the park on the first try,” Wilcox reveals. “He’s also a lifetime Marvel Comics fan, so when we get down to scoring the show, he or I can throw a reference out to something from the comics or movies and easily the other one knows what we’re talking about—and suddenly all the musical pieces are fitting together and it’s ready to go.”

The global pandemic meant that many elements of Marvel’s Spidey and his Amazing Friends have come together with the team working remotely. “As I’ve joked for the last 400 or 500 days, I have a 4-year-old and I have a 6-year-old so I’ve been making a preschool show while running a preschool at home,” Wilcox says with a laugh. But the unexpected benefit of creating a preschool show from home has been having a real-time test audience. “Because of the lockdown, there have been a lot of Zoom calls with a lot of little kids weighing in and sitting on their parents’ laps and responding to the stuff we were talking about in real time with a high level of excitement. That has been fun,” Mozilo says. She also shares, “On a very personal note, my son, who is now 27, but at the time when he was a Disney Junior-aged kid, he was Spider-Man. I lived with Spider-Man for two solid years.” Mozilo’s son, who as a preschooler could often be found fully decked out in a Spidey costume, was living with his mother for some of the quarantine and was able to enjoy a sneak peek at what the team was creating for Marvel’s Spidey and his Amazing Friends. Mozilo recalls her son telling her, “I would have gone insane if this was happening when I was that age.”

Wilcox and Mozilo are both confident that the new series will inspire today’s preschoolers to find their own power—whatever that may be. Wilcox shares, “What I would love is for kids to watch the show and then want to go outside and reenact it with their friends, to be so excited and have so much fun by what they saw that they want to go and try to replicate that for themselves.” Mozilo hopes that the “great responsibility” that comes with kids’ emerging powers helps inspire them to support their own communities. She also thinks it’s important that kids realize that even though Peter, Gwen, and Miles use their physical prowess, more often than not they’re relying on their cleverness and intuition—superpowers all preschoolers possess. She emphasizes, “It’s not just might makes right and I think that that is what I’m hoping kids get out of this, that we’re better together and that we help each other.” 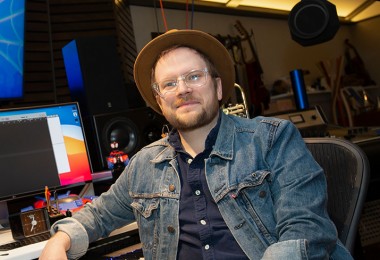