Deck the halls, jingle those bells, and let it snow (even if it’s 85 degrees out)—because as of today, we’re officially Halfway to the Holidays! As our friends at Disney Parks Blog just revealed this morning, the merriest season of them all kicks off November 12, and there’s heaps of holly-jolly fun in store! So what can you expect? We’ve made a list and checked it twice… so be good and read on: 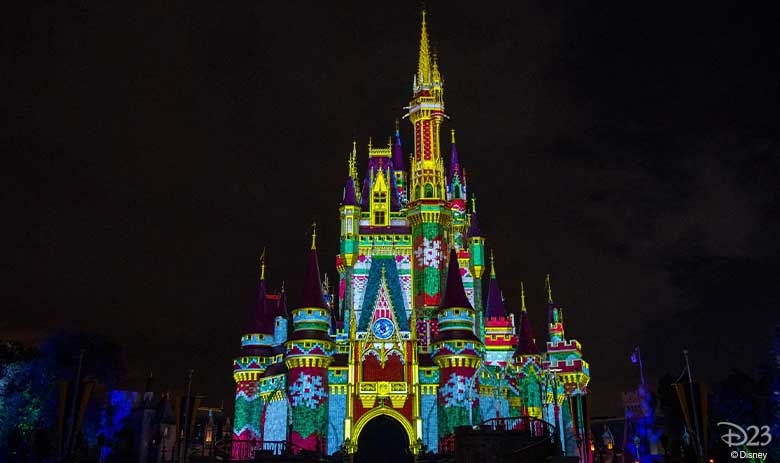 Walt Disney World Resort
Wrapped up festively within “The World’s Most Magical Celebration,” commemorating the resort’s 50th anniversary, the holidays at Walt Disney World begin on November 12 and are sure to delight both young and young-at-heart. At Magic Kingdom Park, glittering decorations will return to Main Street, U.S.A.—and special holiday projections will appear most nights (alternating with Beacon of Magic, part of “The World’s Most Magical Celebration”), once the sun sets, on Cinderella Castle. But that’s not all: Starting November 8 (consider it an early gift from Santa!), the all-new “Disney Very Merriest After Hours”—a special-ticketed event through December 21—will feature four hours of seasonal delights including “Minnie’s Wonderful Christmastime Fireworks”; Disney characters throughout the park; holiday music and décor; yummy treats included; and much more! As with other Disney After Hours events, a limited number of tickets will be sold for this event and go on sale next month, with an early purchase window available to guests of select Walt Disney World Resort hotels. 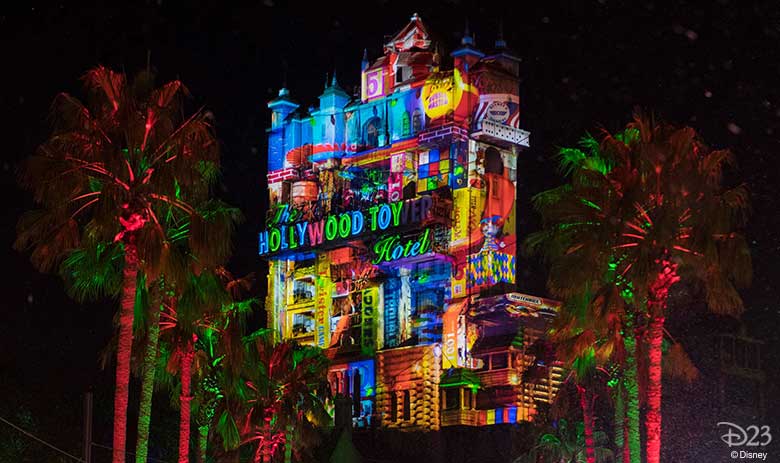 Over at Disney’s Hollywood Studios, Sunset Season’s Greetings will return—as the Hollywood Holiday Tower Hotel on Sunset Boulevard comes to life (also alternating with Beacon of Magic) with projection effects that magically transform it into a snowy corner of Arendelle, a Muppets gingerbread masterpiece, and more. There’ll be vintage-themed holiday décor throughout the park; Santa Claus will bring some North Pole cheer to a motorcade down Hollywood Boulevard; and Olaf will radiate with sunny holiday cheer over at “For the First Time in Forever: A Frozen Sing-Along Celebration.” 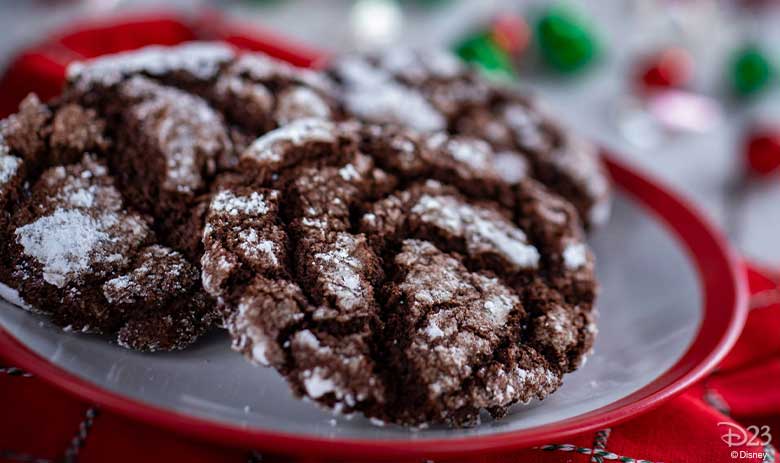 Meanwhile, The EPCOT International Festival of the Holidays will return this year, from November 26 through December 30, and feature Holiday Kitchens all across the park; performances by the iconic Voices of Liberty; the always popular Cookie Stroll; and lots of fun and frolic. 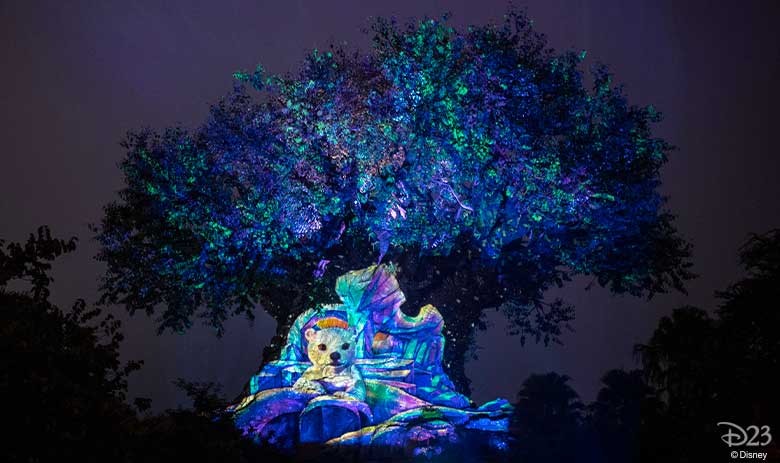 And at Disney’s Animal Kingdom, look for the return of seasonal décor and festive Disney character flotillas sailing down Discovery River to the sounds of joyful songs of the season… and the park’s Tree of Life will offer up both holiday-inspired and Beacon of Light-themed magic. 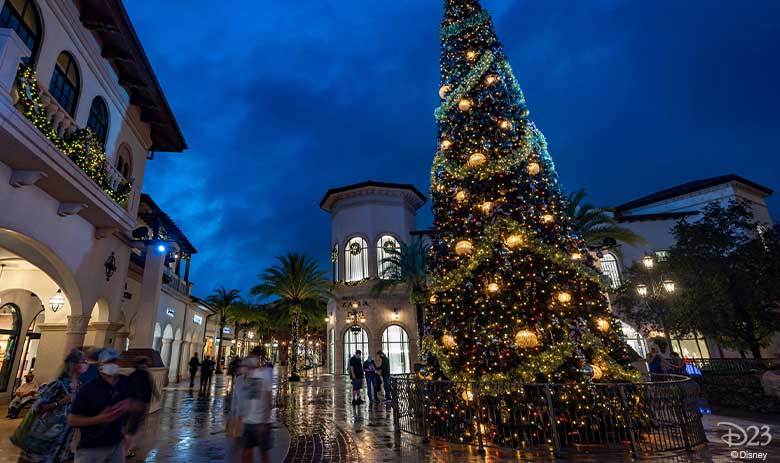 Of course, Disney Springs—the shopping, dining, and entertainment destination—will transform into a winter wonderland, full of enchanting lights and décor and lots of surprises. Great news: The Disney Springs Christmas Tree Stroll returns this year, with its host of elaborately decorated, Disney-themed trees—some new and some inspired by “The World’s Most Magical Celebration.” Plus, a magical snowfall will add whimsy and wonder to Town Center. 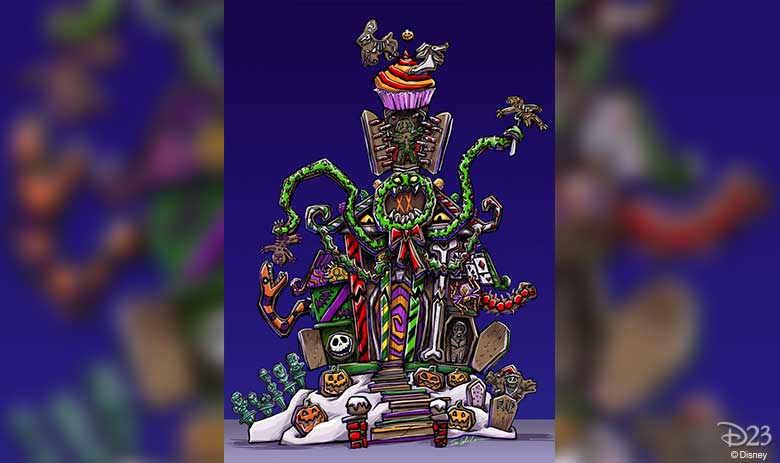 Disneyland Resort
We can hardly believe it, but Haunted Mansion Holiday—the makeover of the classic attraction with all things Tim Burton’s The Nightmare Before Christmas, which we here at D23 look forward to every single year—celebrates its 20th anniversary in 2021! So make sure to mark those calendars: It officially returns to Disneyland Park beginning September 3. (Just a few tantalizing months away!) Disney Parks Blog revealed a first look at this year’s amazing Haunted Mansion Holiday gingerbread house, as well as a sneak peek at some chilling and thrilling new themed merchandise. 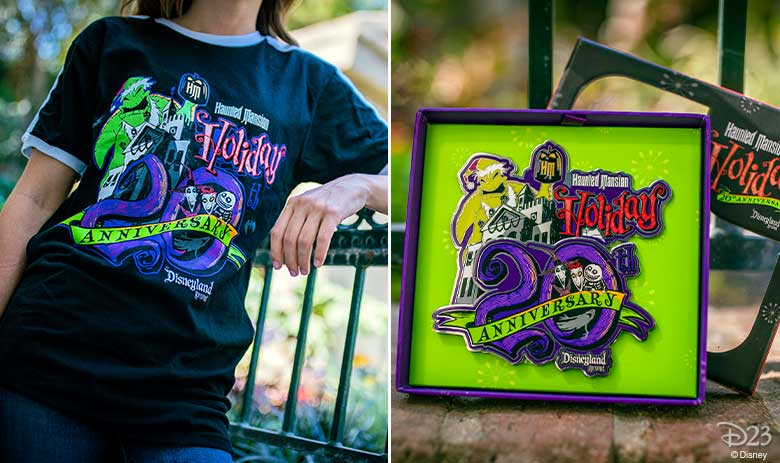 Keep your eyes peeled for more info on what to expect later this year at Disneyland Resort, as we ride our one-horse open sleigh ever closer to the holiday season…. 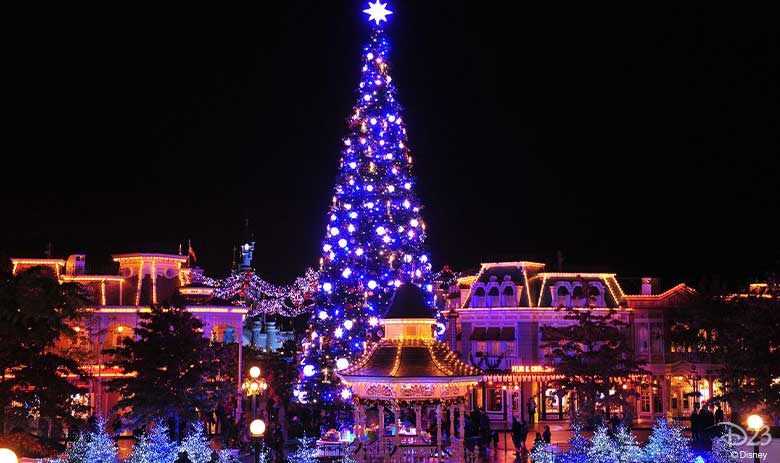 Disneyland Paris
Beginning November 13, the good folks at Disneyland Paris will invite guests to celebrate the manner of holiday magic with “Disney’s Enchanted Christmas!” at Disneyland Park—featuring favorite Disney characters dressed in their holiday best, snowflakes falling from the sky on Main Street, U.S.A., and more merriment than you can shake a minty macaron at… 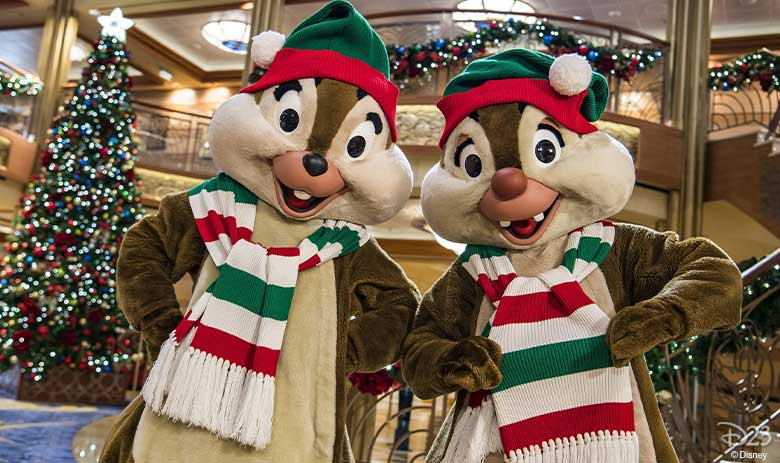 Disney Cruise Line
For those taking to the seas this holiday season, the Disney Cruise Line fleet will be decked from bow-to-stern with holiday cheer and entertainment during Very Merrytime Cruises, from early November through December. Holiday magic is unwrapped for the whole family with festive holiday décor (including a three-foot-tall Christmas tree in the ship’s atrium), favorite characters in their finest holiday attire; tropical holiday fun at Castaway Cay, complete with very special “snow flurries”; and visits from none other than Santa and Mrs. Claus! 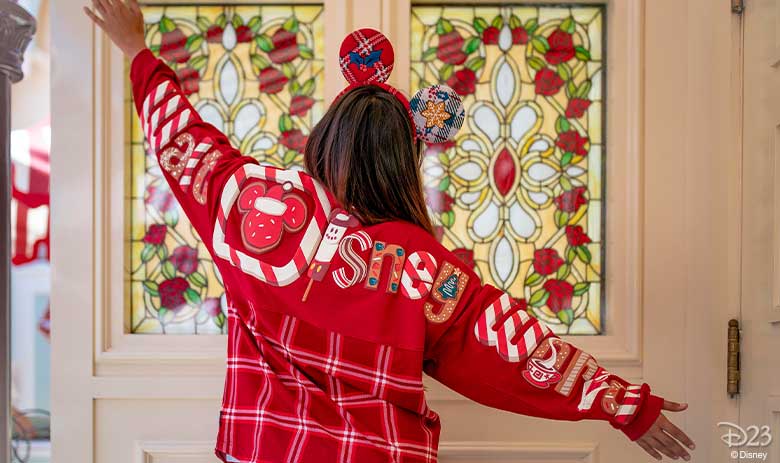 The Merriest of Merchandise and Limited Time Holiday Drink Offerings
Disney Parks Blog also debuted an early look at new holiday-themed merchandise that—much like a certain jolly man in a red suit and some reindeer—will be arriving at Disney Parks and shopDisney.com this holiday season. Keep your eyes peeled for ornaments depicting beloved scenes and iconic characters from your favorite Disney, Pixar, Marvel, and Star Wars films, as well as a super-festive new Spirit Jersey, Mini Backpack by Loungefly, and matching ear headband. And don’t forget these adorable new holiday-themed charms from Pandora Jewelry? 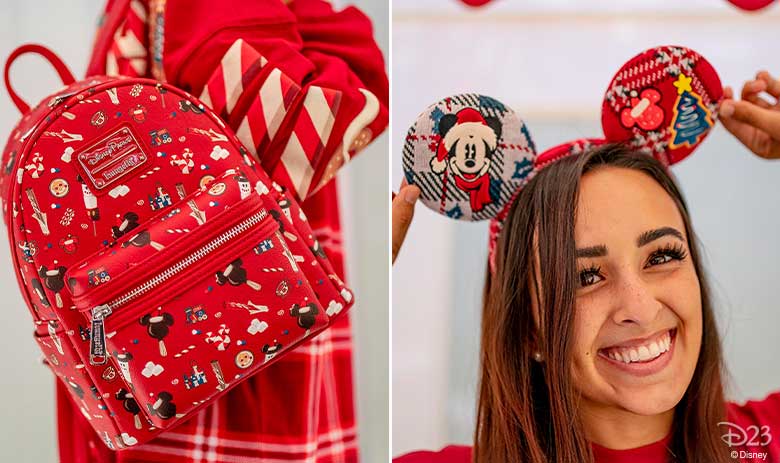 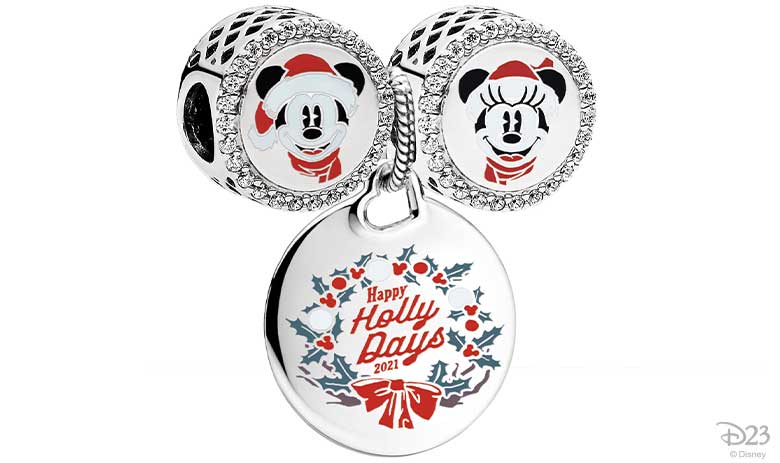 Those hankering for a taste of the holidays right now can visit Joffrey’s Coffee & Tea Company’s The Landing at Disney Springs through July 18 and pick up a cup of their just-returned Peppermint Mocha Latte. And here on the West Coast, at Downtown Disney in Disneyland Resort, Black Tap Craft Burgers & Beer is bringing back their Peppermint Classic Shake. (Okay, now we’re hungry… )

A Halfway to the Holidays TikTok Live Event from Disney’s Blizzard Beach
Want another festive way to celebrate this auspicious holiday-halfsies mark? Be sure to tune in this Wednesday, July 14, at 7:30pm ET for a special after-hours tour of Disney’s Blizzard Beach water park, with an inside look at favorite attractions, a sneak peek at limited time offerings, and other surprises.

Keep Santa’s plate of cookies and glass of milk nearby, because he’s sure to help deliver more festive news on all things Disney Parks holidays in the coming months… stay tuned! 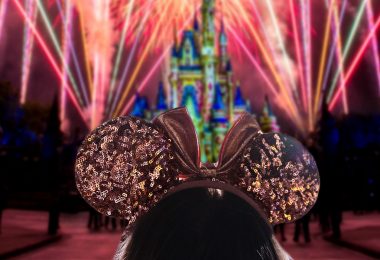 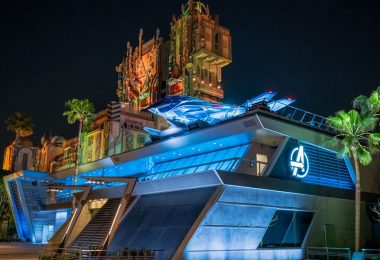 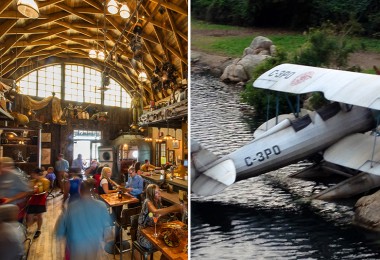