Everyone knows that Walt Disney was a pioneering cartoonist, filmmaker, and family entertainment icon. Less well known is the fact that he was a visionary futurist with an abiding interest in transportation. Disney Editions’ The Disney Monorail: Imagineering a Highway in the Sky, a stunning, lavishly illustrated book out on September 15, 2020, reveals the story behind the development of this new form of transportation, which culminated with the first daily operating monorail in the Western Hemisphere. Jeff Kurtti, Vanessa Hunt, and Paul Wolski tell the fascinating story behind this mid-century masterpiece, which is complemented with myriad historical photographs and rarely seen concept art—all of which combine to give readers the ultimate ride on the Disney Monorail. Here are 8 cool Monorail facts we discovered after reading this beautiful book no Disney fan will want to miss!

1. When planning Tomorrowland, Walt always had a monorail on his mind.
Early concept art for Disneyland—even plans that were discarded or never built—usually contained drawings of some form of Monorail. “I knew, of course, that Walt was always interested in having a monorail at the park,” Disney Legend Bob Gurr says in The Disney Monorail. “If you look at the original sketches made up for Disneyland, it was a kind of overhead hanging type of monorail. But it was there. In the very first batch of ideas, it was there.” 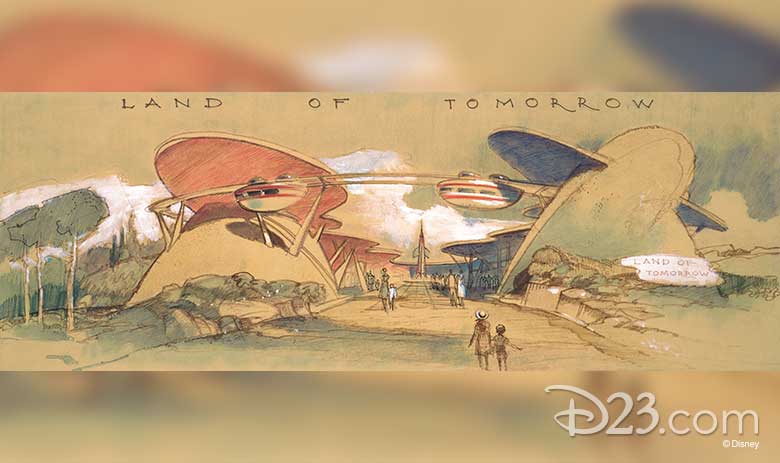 2. The Viewliner was a unique forerunner to the Monorail.
In 1957, Walt wanted to fill some space and create some new excitement at Disneyland. Thus the Viewliner was born. Although they looked sleek and futuristic at the time, Viewliners were actually a linked-together pair of mini-excursion trains, much of it built from discarded car parts. “I started looking for an old car I could transform into a train,” Gurr says in The Disney Monorail. “I finally settled on a 1954 Oldsmobile 88, which had a perfectly symmetrical dashboard. The Oldsmobile, like the rest of the hulking cars from that period, was far too wide to fit on the 30-inch-wide Viewliner track; to solve the problem, the Olds was split in half, removing the 14-inch-wide center section where the radio went. That’s why there was a seam in the center of the window shield. The Viewliner ended service on September 15, 1958, to make way for construction work for the updates to Tomorrowland that would open in 1959—including the Disneyland-Alweg Monorail System. 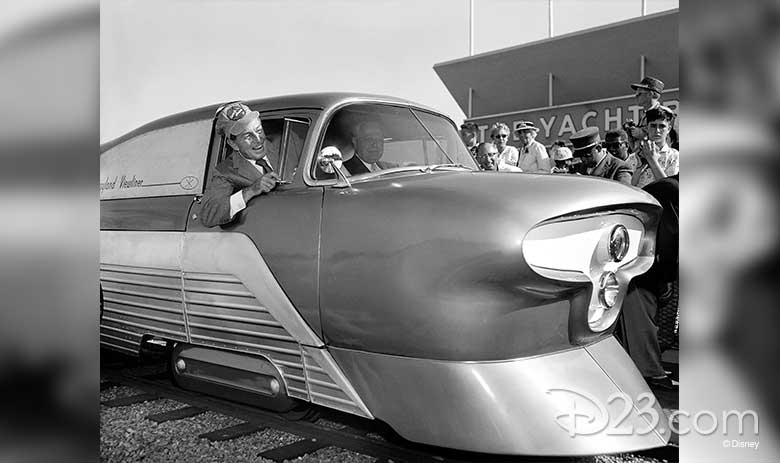 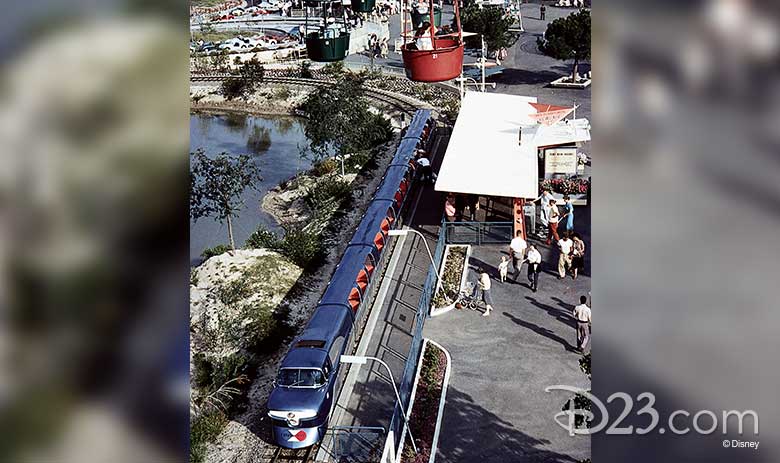 3. Walt’s wife, Lillian, played a key role in the development of the Disney Monorail.
On a trip to Germany in 1952, Walt and Lillian rode an early form of the monorail—one that had carriages suspended beneath the rail. This gave the ride decided sway, and Lillian wondered out loud, “Why can’t they run the cars on top of the track?” It was a notion that stayed in Walt’s mind—probably all the way until the time he discovered the Alweg train in Germany. With Disney representatives meeting with Alweg in Germany, Walt asked Gurr to design something more in line with Tomorrowland ideals. As he says in the book, “I sketched out the old Flash Gordon spaceship—an arrow-shaped cylinder with a big swept-back wing on top and one on the bottom. Then I erased the wing from the top, drew in the old Viewliner cars along the back, and there it was. The Monorail.”

4. At the dedication of the Monorail, Walt saved the day.
When Vice President Richard Nixon’s children, Julie and Tricia, attempted to formally dedicate the Monorail on June 14, 1959, using an oversized wooden scissors to cut the ceremonial ribbon, the stubborn scissors refused to snip and Walt had to rush in to the rescue and rip the ribbon in half with his hands! 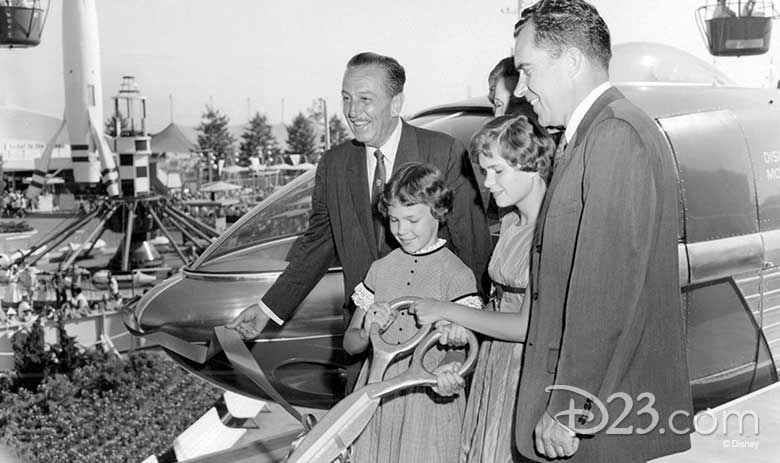 5. Walt Disney owned the Disneyland Monorail personally.
Walt created a private company called Retlaw Enterprises (Walter backwards) to help control the benefits of his name and likeness—and to manage two Disneyland attractions that he owned: the steam trains and the Monorail. According to the writers of The Disney Monorail, “Retlaw paid fees to Disneyland  for the attraction rights-of-way and employed those that worked at the attraction. Walt had also owned the Viewliner and the horse-drawn streetcars on Main Street, U.S.A. All of these assets were sold to Walt Disney Productions in 1982. 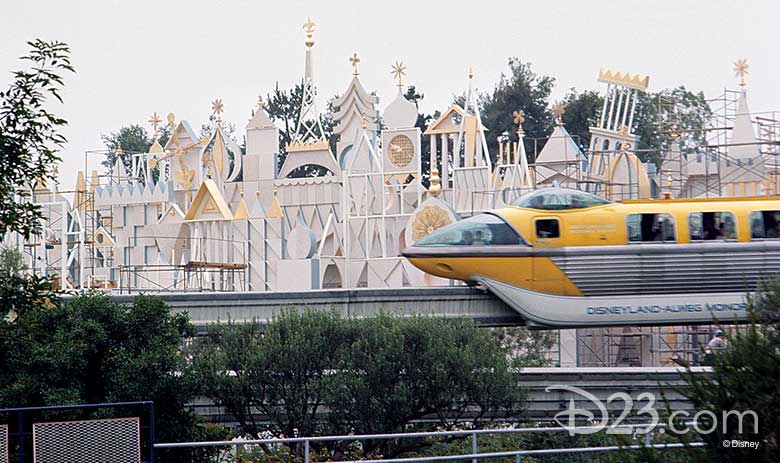 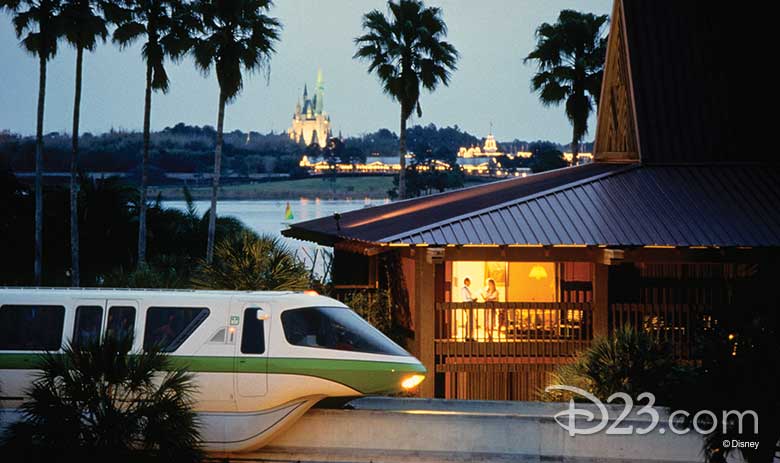 8. In December 1986, the Disneyland Monorail System was named a National Historic Mechanical Engineering Landmark.
As of 2019, only 273 landmarks have been named to this prestigious roster, overseen by the American Society of Mechanical Engineers. There is a plaque located at the entry of the Tomorrowland Station commemorating this achievement. 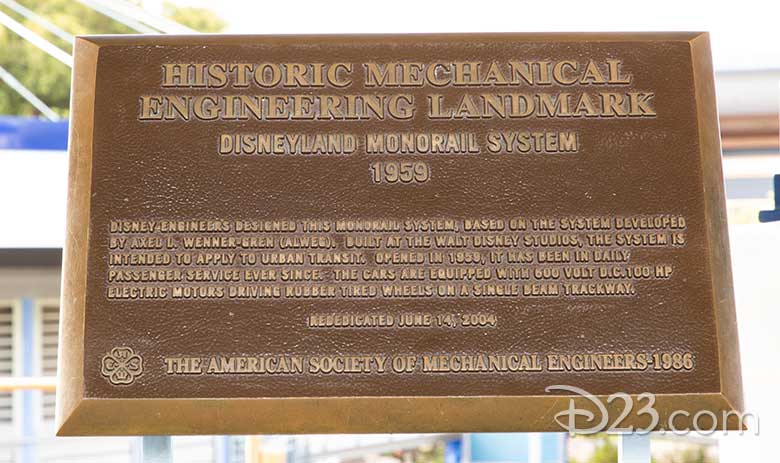 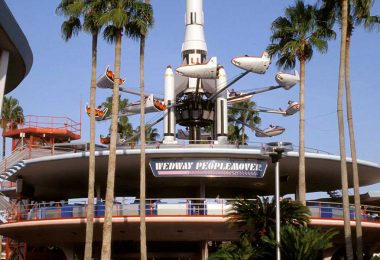 Worlds in Motion: A Celebration of the PeopleMover 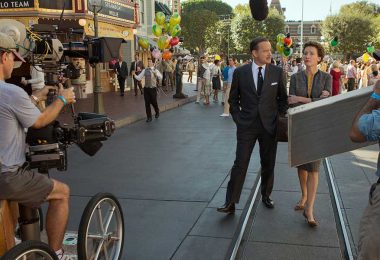 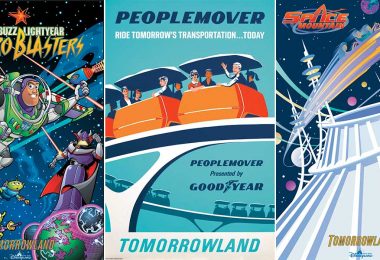 Explore the World of Tomorrow with These Disney Parks Attraction Posters