“Try everything!” The phrase isn’t just the theme of Walt Disney Animation Studios’ hit animated movie Zootopia—it’s also the motto of Disney park enthusiasts around the world. From the most thrilling roller coaster the latest high-tech attraction, Disney parks fans are ready to try it all—which is why guests at Shanghai Disneyland will have another reason to start singing along with Gazelle.

Shanghai Disney Resort just announced an exciting new expansion that will bring the characters and stories from Zootopia, to life. There’s plenty of reasons to be wildly excited for this expansion: When it opens, Zootopia will become the eighth themed land at the world’s newest Disney park and the first-ever Zootopia-themed land at any Disney park worldwide! Park guests will be able to enter the world of Judy Hopps and Nick Wilde for the very first time and discover what it is like to visit the place where animals can be anything they want. 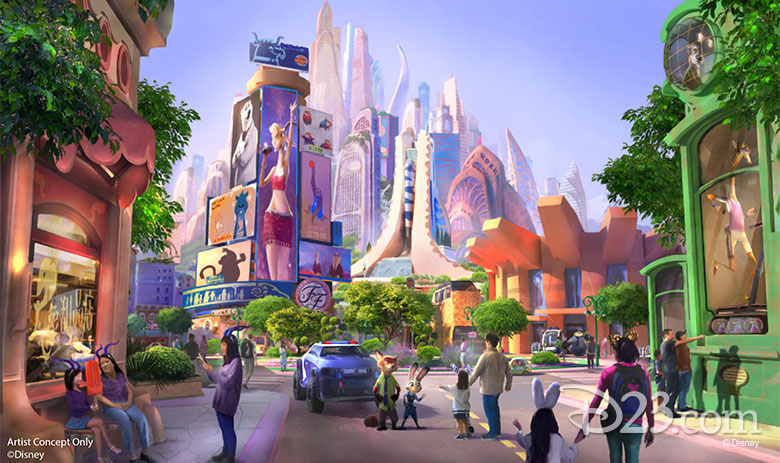 Zootopia will be unique to Shanghai Disneyland and will feature a new, major attraction that seamlessly blends Disney’s storytelling and state-of-the-art technologies in order to bring this fan-favorite movie and its characters to life. The new themed land will also invite guests to fully immerse themselves in the mammalian metropolis of Zootopia, and come along on an adventure with Judy and Nick. With a brand-new attraction, entertainment, merchandise, and food and beverage offerings, the new land will provide guests with even more to experience and enjoy at Shanghai Disneyland than ever before.

“We are thrilled to announce that Shanghai Disneyland will be home to the world’s first Zootopia-themed land,” said Bob Chapek, Chairman of Parks, Experiences and Consumer Products, The Walt Disney Company. “The rapid rate of expansion at Shanghai Disney Resort demonstrates our confidence and commitment to the Company’s future development in China.”

The box office record-breaking movie was China’s No. 1 animated feature film in history, meaning guests at Shanghai Disneyland already want to “try everything.” Of course, no matter where you travel, you’re sure to find a fan or two—Judy and Nick can currently be found greeting guests at Disney parks worldwide, and will soon be joined by other Zootopia friends at their very own land at Shanghai Disney Resort.

“Since the resort’s Grand Opening in 2016, Shanghai Disneyland has gone from strength to strength – continuing to expand and enjoying ever-rising attendance rates while also providing a safe and enjoyable experience for our guests,” said Yang Jinsong, Chairman of Disney’s Chinese joint venture partner for Shanghai Disney Resort – Shanghai Shendi Group. “Shanghai Disneyland has rapidly become one of the fastest growing Disney parks and has been key to the development of the Shanghai International Resort as one of the most visited leisure destinations in the country. This new expansion will provide our guests with an even richer selection of offerings, and will further boost our market competitiveness.”

Construction on Zootopia is targeted to begin later this year. Stay tuned for more updates from Disney Parks and Resorts around the world!