Home / Walt Disney Archives / Archive Spotlight / You’ll Always Be a Prince to Me: ...

Thirty years ago, audiences around the world entered a veritable Cave of Wonders with the release of Aladdin. With its adventurous story, heartfelt characters, and stunning visuals, Aladdin was a success upon its release. While the wicked Jafar may have used the Sultan’s rare blue diamond to find a diamond in the rough, the creative team behind the film—led by directors Ron Clements and John Musker—used their own special kind of magic to conjure Aladdin.

The 1992 animated hit was not the first time the folk tales from One Thousand and One Nights appeared on the silver screen. Earlier adaptions include the silent The Thief of Bagdad (1925), starring Douglas Fairbanks, and The Thief of Bagdad (1940), a Technicolor confection with famed German actor Conrad Veidt as the film’s sinister villain, Jaffar. The ‘40 Thief of Bagdad was just one of the many aesthetic inspirations that Aladdin’s creative team referenced to shape the look and feel of their film. 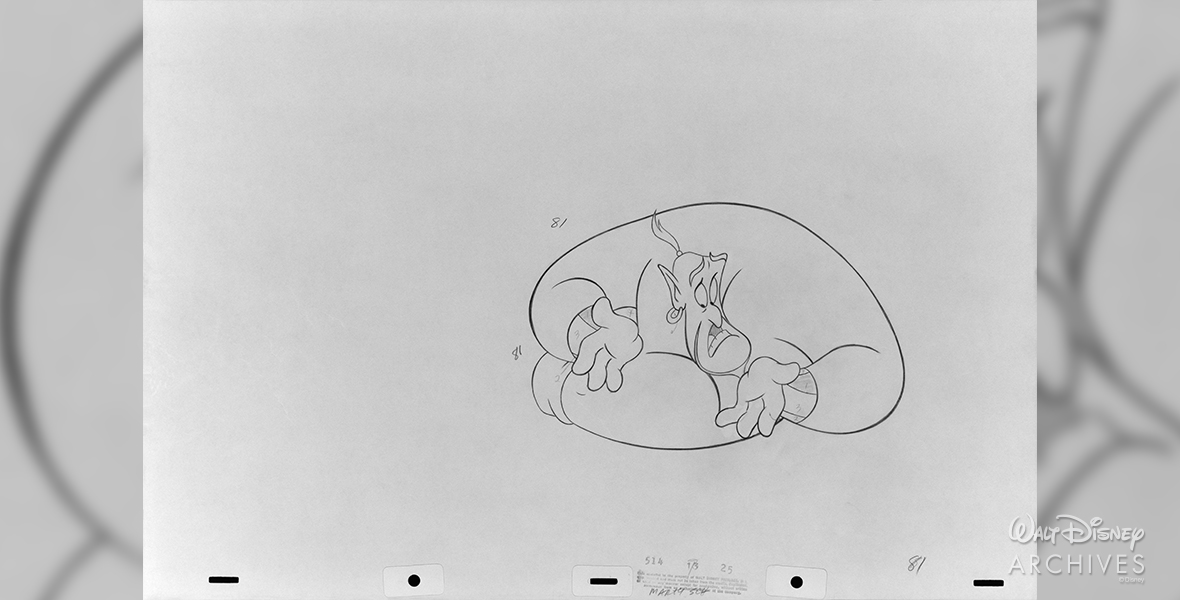 Intricate Persian miniatures and their silhouetted shapes containing intricate details—as well as Arabic calligraphy with its curved, elegant lines—were perhaps the most frequently referenced during the production of the film... fitting for a story drawn from Persian, Arabic, and Indian sources. 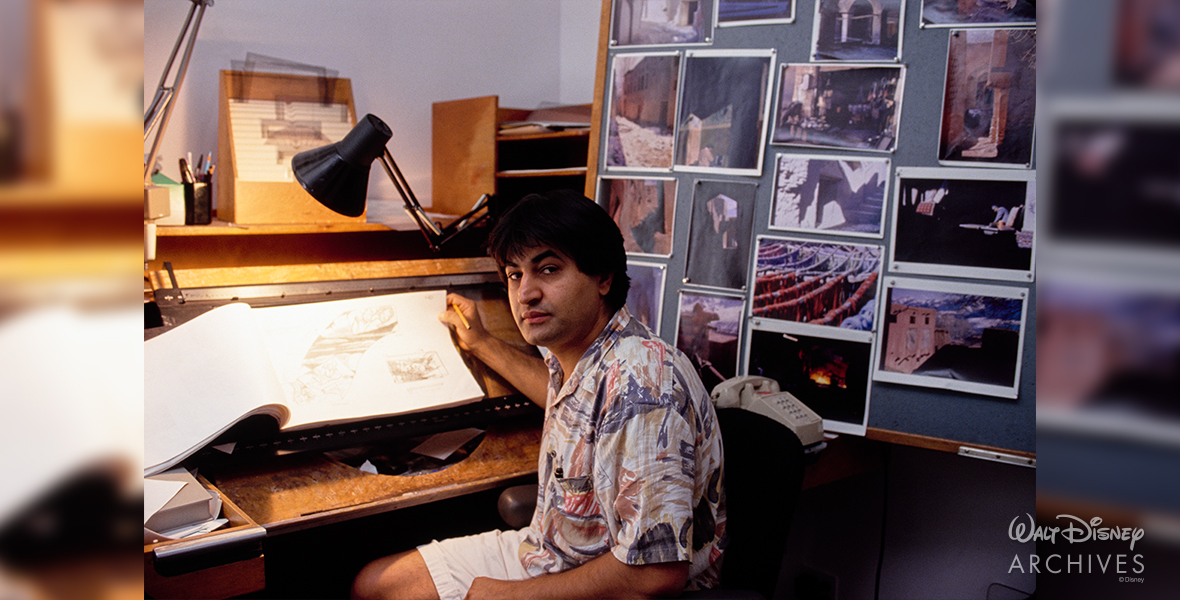 Rasoul Azadani, layout supervisor for 1992’s Aladdin, at work. Note the research photographs on his bulletin board!

As production designer, Vander Wende emphasized the importance of graphic unity to advance the visual storytelling of the film—ensuring a vibrant, cohesive look for the characters and their environment... from the glittering, dangerous Cave of Wonders to the Sultan’s towering palace perched above Agrabah. Colors and shapes intentionally reflected the emotional arc of Aladdin; blue is associated with good, while red is associated with evil. 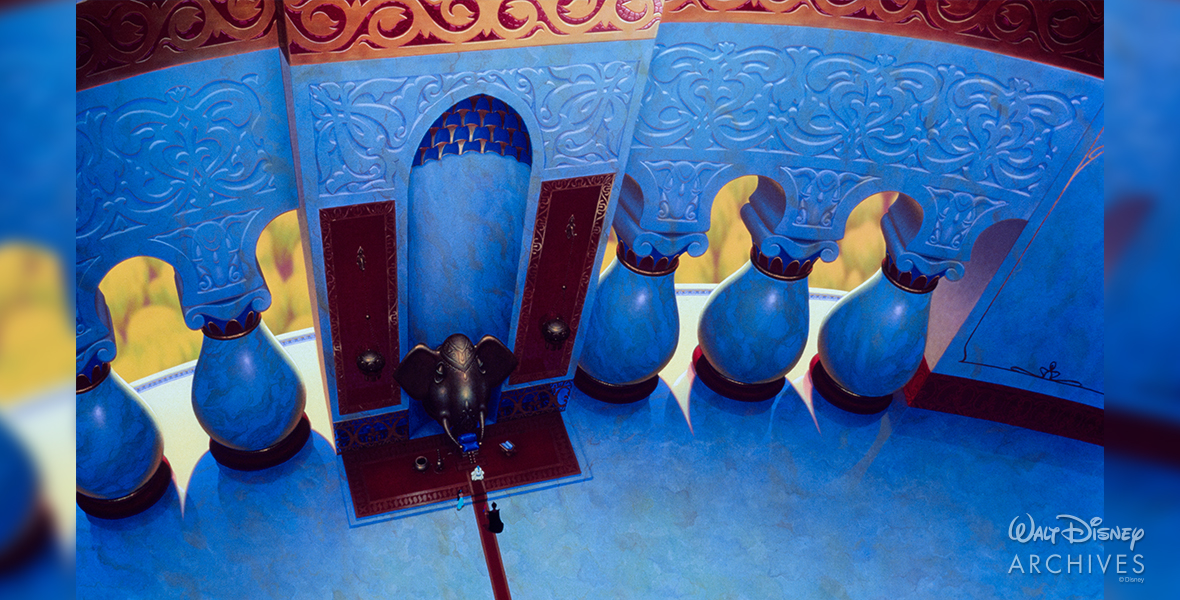 Take, for instance, the throne room in the Sultan’s palace: While the Sultan inhabits it, the curves of its colonnade mimic the Sultan’s own rounded design—in the words of Perkins, “[his] basic shape is like an egg”— and the light blues and soft golds of his clothes are reflected in the color palette of the throne room. 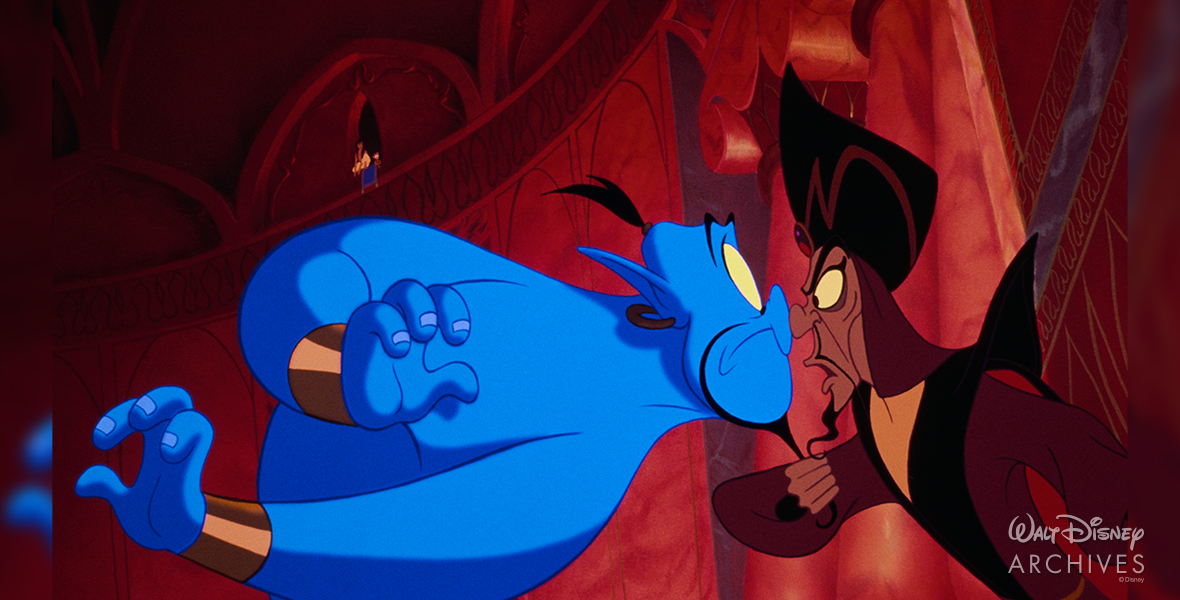 Jafar and the Genie in the throne room in 1992’s Aladdin.

Yet when Jafar makes his initial wishes “to rule on high as Sultan” and then “to be the most powerful sorcerer in the world,” the throne room completely transforms. Instead of the genteel blue, it is now shaded in intense reds and dark golds, fitting for Jafar’s villainous ways.

Of course, Aladdin would have not been the same without the profound impact esteemed caricaturist Al Hirschfeld had on its animators. 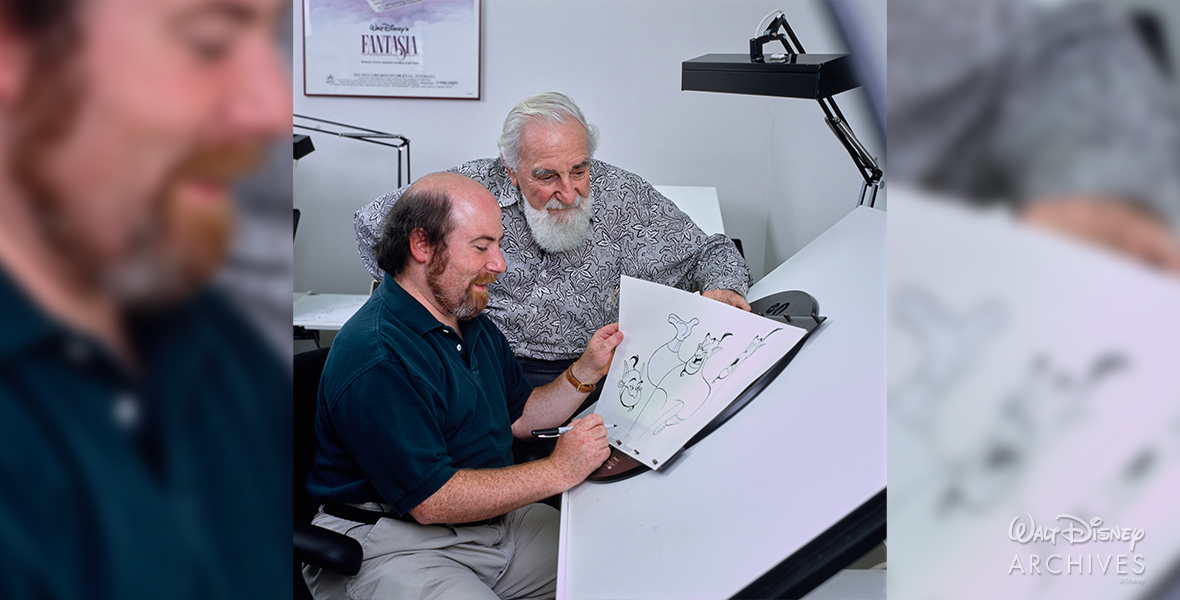 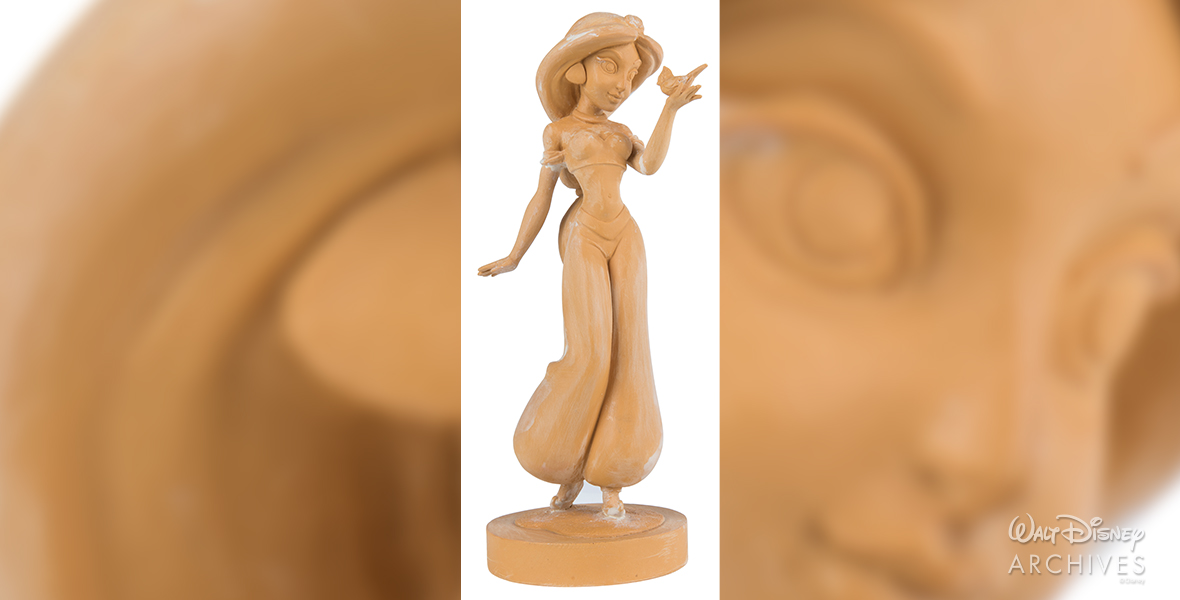 Animators used this Jasmine maquette as a visual reference for her character during production of 1992’s Aladdin.

While Princess Jasmine may be a less zany character than the Genie, Hirschfeld’s influence is still felt in her character design. Her basic shape is that of an hourglass—and hewing to the graphic unity guiding the film’s look, the forms in her bedroom echo that, from the columns to the shadows the lamps cast on the curtains. Mark Henn, lead animator for Jasmine, drew inspiration for her character from voice actress Linda Larkin’s performance as well as from a photo of his own younger sister. Inspiration truly came from everywhere in the making of Aladdin!

Be sure to ruminate whilst the Genie illuminates the possibilities, and catch Aladdin streaming on Disney+!