Home / News / Headlines / Unwrapping the Secrets of Under Wraps 2

Premiering Sunday, September 25, at 8 p.m. ET/PT on Disney Channel and Friday, September 30, on Disney+, Under Wraps 2 picks up as Marshall (Malachi Barton), Gilbert (Christian J. Simon), and Amy (Sophia Hammons) are preparing for a spooktacular Halloween-themed wedding! It should be a happy day for Amy’s dad (Claude Knowlton) and his fiancé, Carl (Antonio Cayonne)… but things start to unravel when the three BFFs discover their mummy pal Harold (Phil Wright) and his eternal love, Rose (Rryla McIntosh), may be in imminent danger.

“At first, Amy and Gilbert are running the school newspaper, just kind of living their normal lives,” Hammons tells D23. “They realize that not only has Harold been moved to another museum, but another mummy from his timeline has been revived—and he’s coming to get Harold.” 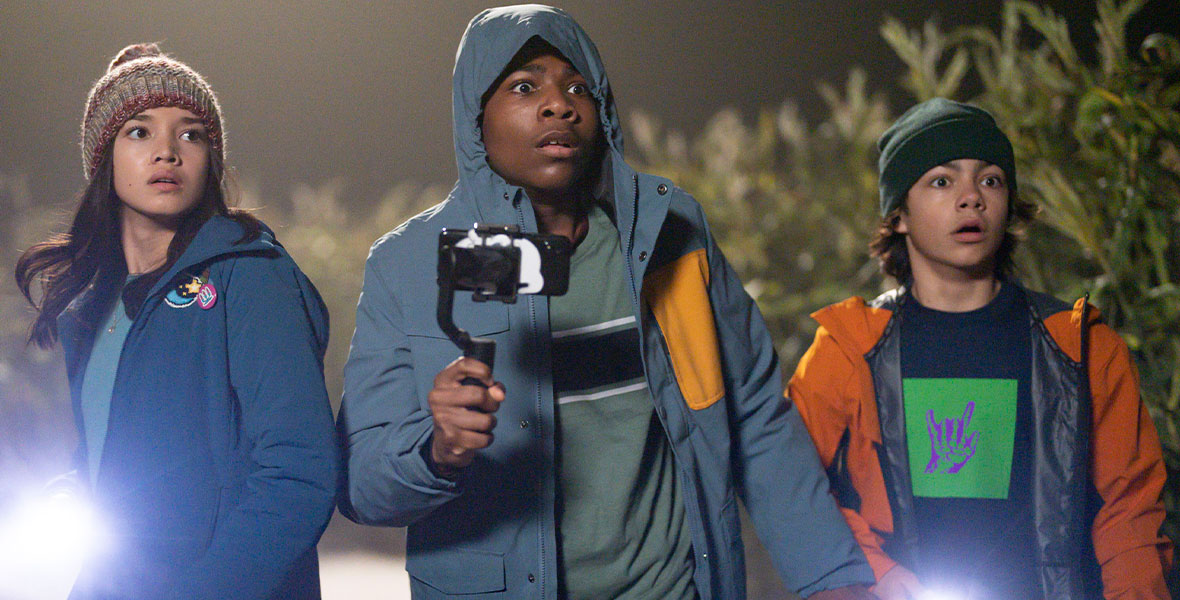 Despite how intimidating Sobek is onscreen, the actors say the new character was a welcome presence on set. “My favorite scene to film was when Sobek brings his guards to life, because these guys were huge,” Barton tells D23. “They were so tall, and it was so fun to have so many mummies on set at one time.“ It was equally fun for Wright, who played the sole mummy in the first film. “It was pretty awesome to have more people on set who had to experience what I went through,” Wright says. “It’s always more fun when there are more characters that view the workday the same way you do.”

A sequel inherently requires bigger stakes—and according to the cast, Sobek is much a more cunning adversary than the criminals their characters faced in 2021’s Under Wraps. With help from his hypnotized lacky, Larry (Jordan Conley), Sobek kidnaps Rose—forcing Marshall, Gilbert, Amy, Harold, and Buzzy (Melanie Brook) to find a way to save her and get back in time for Amy’s dad’s wedding. “Defeating a super powerful mummy is clearly no small task, especially when he has a laser scepter,” Barton says. “But as you will see in the movie, you can do just about anything if you work together.” 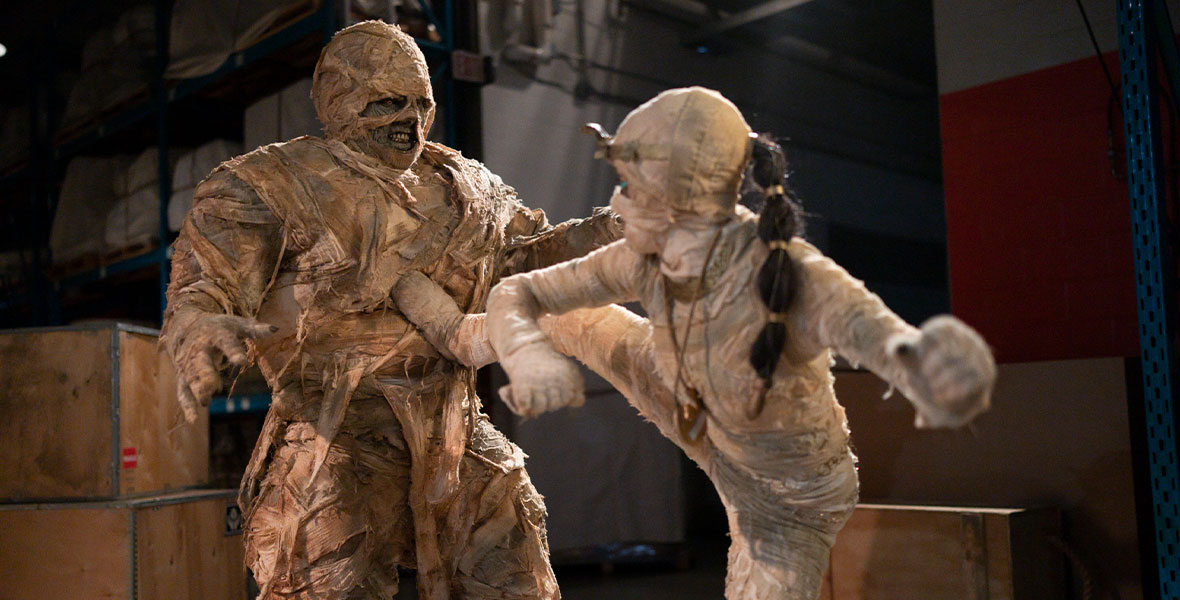 Naturally, the characters have grown up quite a lot since audiences first met them in Under Wraps. “In the first movie, a lot of people saw Gilbert as the scaredy cat—which he was!” Simon says. “Now, he’s focusing hard on reinventing himself. He’s really trying to show people that he’s not as afraid he used to be. In fact, he’s started a social media channel, called Gutsy Gilbert, where he reviews all the new Halloween mazes.”

As for Marshall, Barton says, “Similar to the first movie, he really takes on the job of saving Harold—and now Rose, as well. But I think he is also trying to find himself and his place among his best friends.” Amy, in addition to running the school newspaper with Gilbert, is trying to be supportive of her father. “She’s just trying to go to celebrate Amy’s dad’s wedding,” she says. “And then it turns into a whole big thing.”

Obviously, being cast in a sequel to the Disney Channel Original Movie was a dream come true for McIntosh. “Joining the Under Wraps family was everything I wished it would be and more,” she says. “The experience of shooting and creating something so magical is something I’ll never forget. What made the experience so impactful was the people I got to work, learn, and play with. The cast and crew were both amazing!” 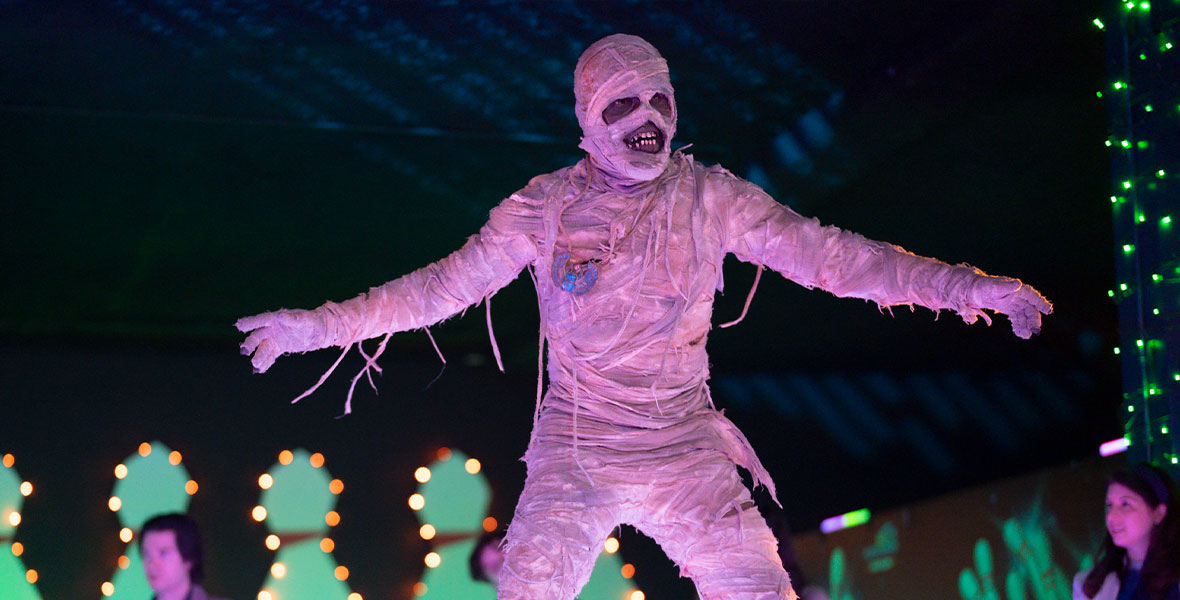 Wright worked closely with McIntosh to show her how to best bring a mummy to life… so to speak. “It’s a process that all the mummies have to go through,” he explains. “Alex Zamm, our director, and I call it ‘Mummy Training.’” Harold’s relationship with Rose adds a new dimension to his personality, Wright adds: “Everyone will be pleased to see how much of an effect Rose has on Harold. She brings out another side of him.”

“Not only are Harold and Rose each other’s one true loves, but they are best friends and never forget to have fun—sometimes too much fun,” McIntosh says. Speaking of having “too much fun,” McIntosh’s favorite part of filming was also the most challenging, as it involved “discovering who Rose was and how she felt, then finding creative ways to portray her passions, emotions, and intentions without having dialogue.”

The mummies may not be able to speak, but the cast can’t say enough about how excited they are to share Under Wraps 2 with audiences. “I think fans will be most excited about seeing their favorite characters back together again on another crazy adventure,” Barton says. “This movie was so fun to make, and I just can’t wait for everyone to experience it and meet the new characters!” Wright tells D23, “I hope they appreciate the fun-loving work we put into this project. With the addition of more mummies, more dancing, and more adventure, I’m sure they’ll have a blast watching.”