In trying to raise money for the creation of Disneyland the park, Walt Disney decided to develop Disneyland, the television series. He approached the three television networks at the time, CBS, NBC, and ABC. While he tried to sell the show to each network, he also insisted that investing in his park would be part of the deal. Most observers at the time didn’t foresee the promise of his “amusement park,” so only ABC negotiated a deal. Walt once told of how the struggling ABC needed the show so badly, “that they bought the amusement park.” And so, on this day in 1954, Disneyland debuted on the network that The Walt Disney Company would one day own. The anthology would continue with various titles for decades to come and was hosted by Walt Disney until his death in 1966. For his first introduction in this series, with the premiere episode entitled “The Disneyland Story,” Walt stated, “Now we want you to share with us our latest and greatest dream… Disneyland. I want to tell you about it because later on in the show you’ll find that Disneyland the place and Disneyland the TV show are all part of the same.” 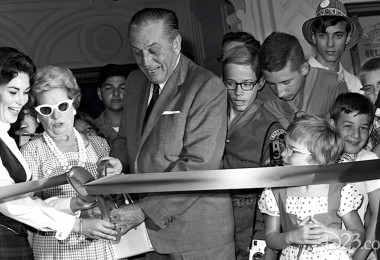