In March 2009, Disney Chairman and CEO Robert Iger introduced D23: The Official Disney Fan Club and the then-upcoming D23 Expo 2009 in grand style on ABC’s hit daytime talk show The View. Flanked by hosts Barbara Walters, Whoopi Goldberg, Joy Behar, Sherri Shepherd, and Elisabeth Hasselbeck, who were on location at the Disney Studio lot in Burbank, Calif., to film the show, Bob talked about the brand-new fan club and Expo—both firsts for the Company. To give audiences a taste of what they could expect from the D23 Expo, Whoopi took a tour of the Walt Disney Archives with Archivist Rebecca Cline. When the pair came across Big Al’s guitar from Disneyland’s now-defunct Country Bear Jamboree, they broke into an impromptu duet of “Blood on the Saddle”—the biggest of the bears’ signature tunes.

Now, six years later with D23 Expo 2015 just months away, we thought it would be fun to look back at some of the best moments from Expos past. But, keep in mind, these are just some of our favorite D23 Expo moments. After all, the first three Expos were chock full of unforgettable, one-of-a-kind experiences. So don’t hold it against us if you don’t see your favorite on the list! 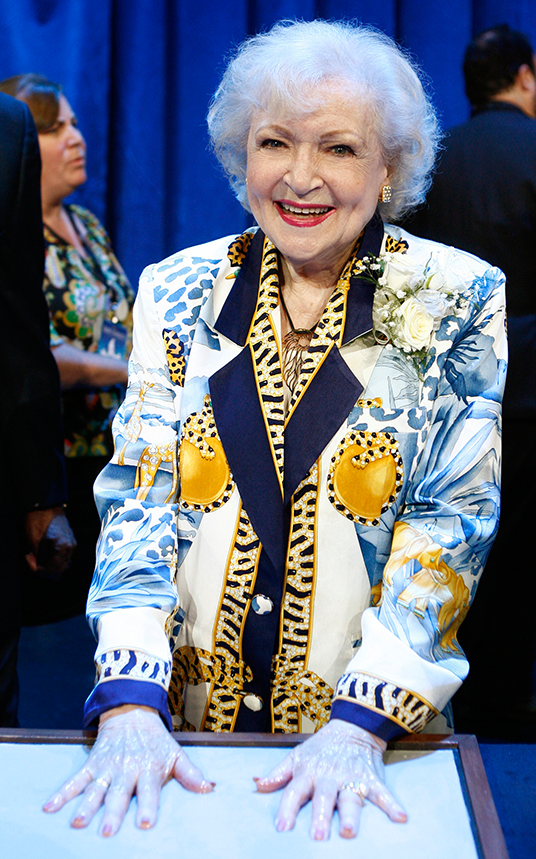 When the adorable, then-nearly-90-year-old TV vet Betty White received her Disney Legends award, she quipped, “First of all I want to put to rest the rumor someone started that I used to babysit for Walt when he was a little boy—I didn’t!”

When the curtains on stage at The Walt Disney Studios presentation parted and good ol’ Jack Sparrow, aka Johnny Depp, appeared in full costume, on his pirate ship, drunk as a skunk—the crowd went wild. The screams and cheers from the totally stunned audience were deafening and could be heard throughout the Anaheim Convention Center. 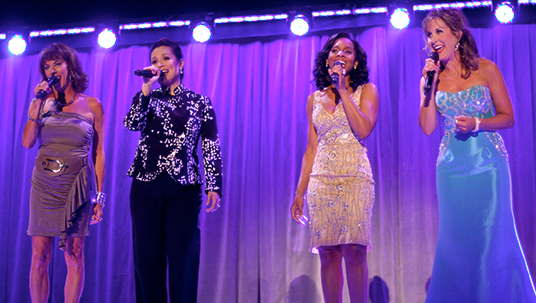 Disney Princesses singing together at Legends (2011)

When newly inducted Disney Legends Jodi Benson (Ariel, The Little Mermaid), Paige O’Hara (Belle, Beauty and the Beast), Lea Salonga (singing voice of Mulan, Mulan, and Jasmine, Aladdin), and Anika Noni Rose (Tiana, The Princess and the Frog) performed a stirring musical medley of classic songs from their respective films after being honored at the 2011 ceremony. For the finale, the Princesses sang “A Dream is a Wish Your Heart Makes,” bringing the capacity crowd to its feet. 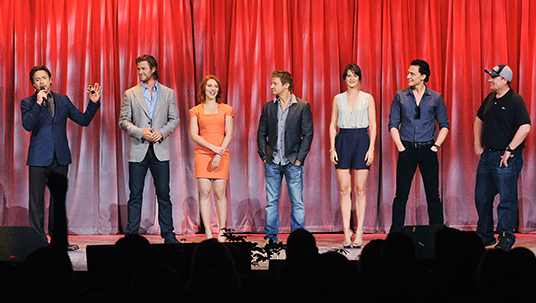 The Avengers make an appearance during Studios presentation (2011)

When, after what was already a jam-packed, star-studded Walt Disney Studios presentation, Kevin Feige, Marvel Studios producer and president, introduced The Avengers cast. Scarlett Johansson, Chris Hemsworth, Jeremy Renner, Tom Hiddleston, Cobie Smulders, and the inimitable Robert Downey Jr. thrilled all in attendance. Backstage, after the event, Downey gave the kind of description of D23 Expo 2011 that only he could provide, “It’s like Comic-Con with better security.”

When Jason Segel took the stage to interview Kermit the Frog about The Muppets, Miss Piggy was nowhere to be seen. Always fashionably late and arriving in style, she rolled on in the sidecar of her own personal motorcycle to set the two of them straight! 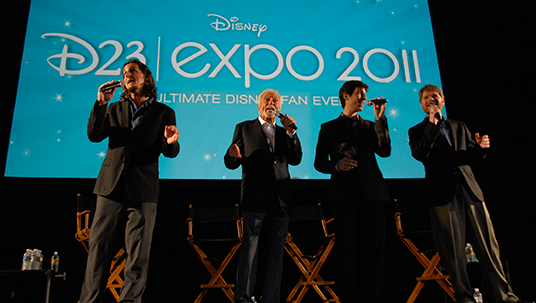 When Disney Legend Dick Van Dyke performed well-known Disney hits, pop standards, and songs from his storied career with his a cappella quartet Dick Van Dyke & The Vantastix. For an encore the group performed a Mary Poppins medley of “Chim Chim Cher-ee,” “Step in Time,” “Supercalifragilisticexpialidocious,” and a rap cover of “A Spoonful of Sugar” that left the audience in stitches, and judging by the reaction on Dick’s face, he enjoyed it as much as the crowd. 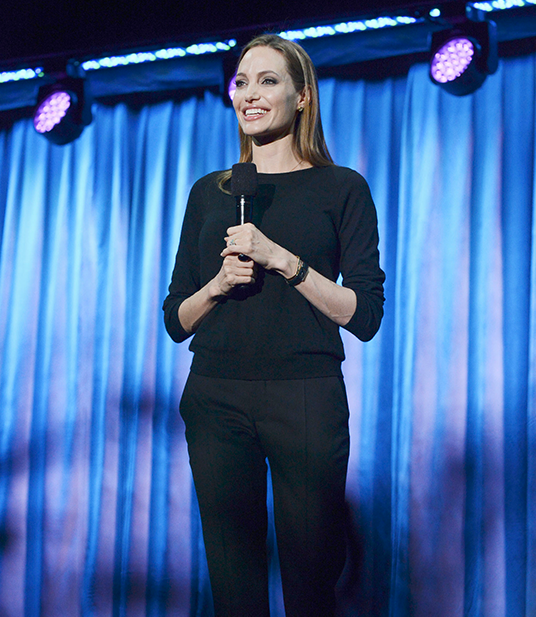 When international superstar Angelina Jolie graced the stage at The Walt Disney Studios presentation, jaws dropped and a collective gasp rang out throughout the jam-packed D23 Arena. The stunning beauty graced the stage to help introduce Maleficent. 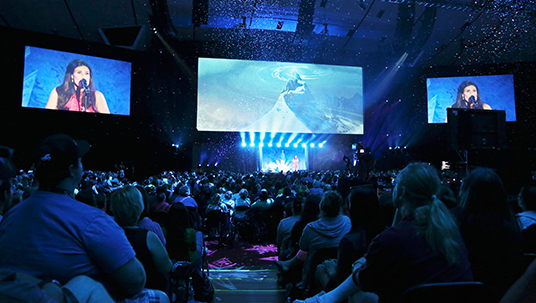 When fans were treated to the first live performance of Frozen‘s Academy Award®- winning song “Let It Go.” Broadway’s Tony® Award-winner Idina Menzel, who provides the voice of Elsa in the film, sang the soon-to-be-mega-hit and this stunning performance was just one amazing moment in what would become the Frozen juggernaut that is still sweeping the nation and the globe.

When fashion guru and Disney Channel star Tim Gunn, who voices Baileywick on Sofia the First, heard about the Harrods collection of designer dresses inspired by Disney Princesses on display at D23 Expo 2013 and made a beeline for the Treasures of the Walt Disney Archives exhibit to see the exquisite creations stunningly handcrafted by world-leading designers including Oscar de la Renta, Versace, and Elie Saab, to name a few. 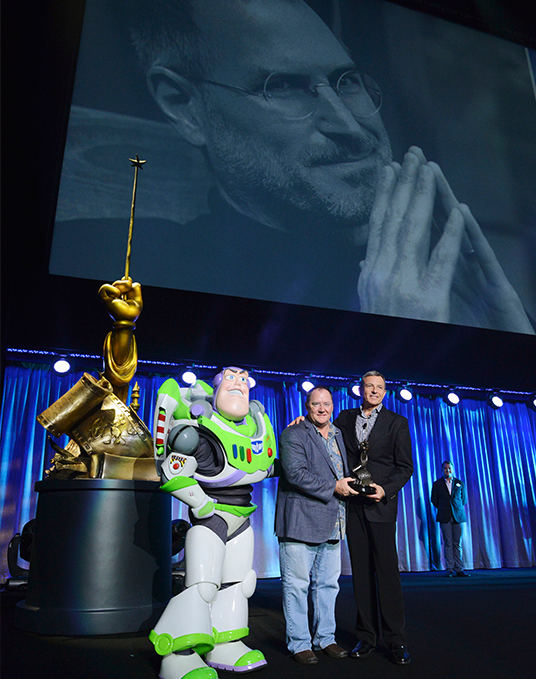 When Walt Disney and Pixar Animation Studios Chief Creative Officer John Lasseter accepted the Disney Legends Award for Apple founder and visionary Steve Jobs. “I don’t know how I’m going to get through this,” he said, recalling his dear friend. “I remember a meeting with him going over the Tin Toy stories and drawings. And he did that trademark move of his—his hands under his chin—and he wasn’t even looking at the drawings. He was looking into the future. At the end of the meeting, he said, ‘John, make it great.'”

When Darth Vader interrupted the Star Tours announcement at the Walt Disney Parks and Resorts presentation, surrounded by the 501st Legion.