The clock is nearly ready to strike for the debut of the cinematic ball we’ve been waiting for—the release of Disney’s Cinderella, which opens in theaters this Friday, March 13. D23 had the opportunity to speak with the film’s stars, Lily James and Richard Madden, as well as director Kenneth Branagh, and hear what they had to say about re-imagining Disney’s 1950 animated classic and re-introducing this timeless tale to a 21st-century audience.

Director Kenneth Branagh: “So what we needed from Cinderella was always the same, and it was, you know, generosity of spirit and a kind of lightness of touch . . .  a lovely voice, a kind of sense of fun in the absurd and everything—and she has all of that. It was a lovely phone call to make.”

Branagh: “I think she sees the world in slightly poetic terms, you know, as we say, she likes to try and see the world as it could be—not necessarily as it is, which is a line from Cervantes from Don Quixote, where he’s tilting at windmills and they talk about madness. The full line is, ‘Who knows where madness lies? Perhaps in too much sanity is madness, but perhaps madness of all to see the world as it is, and not as it could be.’

I’m pro-dreamers and, you know, Don Quixote was a dreamer tilting at windmills

. . . Cinderella, he might argue, she’s a bit of a dreamer—but she’s a beautiful dreamer.”

Actor Richard Madden: “Some see him as a soldier, and [some see] him as a friend, and all these different elements pull into him to kind of make him. I really think it’s important, especially with Cinderella, to have created a character that’s worthy of her affections. But I think that slightly outdated, old-fashioned view of a woman with a terrible life who needs a man to come and rescue her from that doesn’t work any more. That’s not actually a great message to be passing on to children. It’s totally different to that. You’ve got a young man and a young woman and they’re bringing out the best in each other, and that’s kind of much more relevant message.” 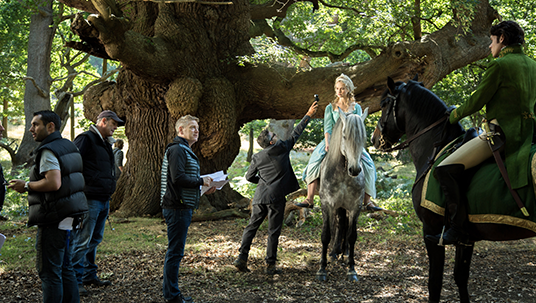 On the scene where Cinderella and the Prince Meet in the Wood:

Branagh: “I think it was deliberate to try and have it to be the least kind of polished. I mean, we were already on horseback—which was good, because there was an unpredictability inevitably. We also were physically—because they were on real horses and we didn’t want to spook the horses—we were further away with the cameras on longer lenses so we were overhearing the scene. Often with horses you get close and maybe a groom will hold the horse’s head while our camera physically gets closer, so that nobody gets hurt, but in this case they were controlling the horses and we were further away. And we were in this ancient woodland. I don’t know if they’ve mentioned the place, the part of the Windsor Great Park that we were in—special permission of the Queen to film there—was, 600, 650 years old. So it was important to be in a special place. These were oak trees were older than Shakespeare, so I enjoyed saying on the morning, ‘This place you’re in—this was here, these trees were here before Hamlet was written. It’s an unusual spot.’ And they’re very sensitive, the two of them, in a good way—so you could feel that they were now doing this scene in a magical place.”

Madden: “There’s so many parallels on that first day. Lily couldn’t rein before we started filming, so just that element of me trying to calm Lily’s horse and help her with that, just like the prince does in the scene. And we’ve got all these kind of nervous emotions and we don’t know each other—we’ve not worked together yet—and you’ve kind of got all these parallels happening which kind of feed into the scene and help us a lot.” 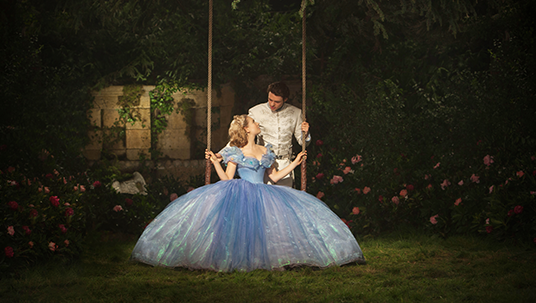 On the Prince’s Wardrobe:

Madden: “Sandy Powell was such a stunning, good costume designer, but that’s what we first discussed when I first met up with her, to work out what I was going to wear in this film. And I really wanted to retain a masculinity to this prince, and so we worked together with Sandy to try and make something that is regal, and decadent, and intricate, and beautiful—but also masculine, which wasn’t what I first thought when I walked in and saw my quaint jacket for the ballroom, which has got sequins and glitter on it. But actually, when you put it on yourself in that amazing set, with all the other dancers and extras and, actually, it is masculine. And the thing about Sandy’s costumes is they’re all, you know, practical first and foremost.”

On Dancing and the Dress:

Actress Lily James: “Well, we made some slight mistakes, I think, along the way—the first one being that we learned the dance in tracksuit bottoms. So we went to Pineapple Studios in London every weekend, Richard and me, for months before filming and then every weekend during shooting. And we were getting better and better, and we were feeling really happy with ourselves. We were like, ‘This is fine. We’ve got this down.’ And then the dress was introduced and I had a nervous breakdown.” And I literally thought it was going to be impossible, as there’s no way… And then the first time I just wore the petticoat, like 12 layers I think, or maybe it’s eight? Something between eight and 12, and all thin like gossamer silk, so if Richard even touched it, basically it ripped. But then somehow, magically, it all began… We figured it out and we changed a few moves and Richard—it was a military operation for him.”

Madden: “I had to train three or four days a week for about two-and-a-half months before they’d even let me near Cinderella’s dress, because I would’ve destroyed it.”

James: “And he had to lift me in the dress, which made me like twice as heavy. [laughs] And push me in a swing on the dress. So it was hard—I turned and then five minutes later my skirt would catch up with me [laughs]. My corset was really tight so I struggled, you know, breathing, and the dance was quite long. But a few times Ken would call action, basically when I started at the top of the steps, and he—we didn’t know, but he didn’t shout cut until we finished the dance, so we did these long takes. It was one of the best moments shooting I’ve ever had, because we didn’t know if it was going to stop and we just got so lost in it.” 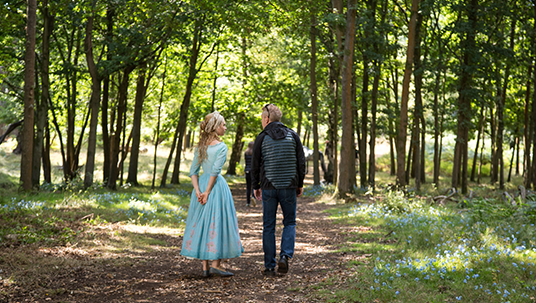 On her “Cinderella Moments”:

James: “There have been moments on the way. The first one was when Ken rang me himself, to tell me I’d got the part. And he said, ‘Hello it’s Kenneth Branagh.’ And he said:

‘I want you to be my Cinderella’

. . .and I just, in that moment, I was just sort of bowled over and couldn’t believe it. I was so, so surprised that I got it. And then throughout, I mean, putting the dress on for the first time, doing the dance… Seeing that magic garden that I go into on the swing… Seeing the slipper, and the stair—and the carriage.”

James: “I just loved everything she did. And also, in the point for Ella’s story when she comes, she’s almost, almost given up—well has given up faith—and then suddenly this, like, bright light comes in. We were both—especially once I transformed—we were both in these huge dresses. And [laughs] we would basically just wave at each other from our tents. We could barely touch hands because our dresses were so big. And she had—have you heard?—she had this whole, like, lighting rig in her skirt. So this guy would come and turn her on every morning, so this man would appear from under her skirt [laughs]. And you can imagine Helena comes up with some quite funny comments about all that. It was great.” 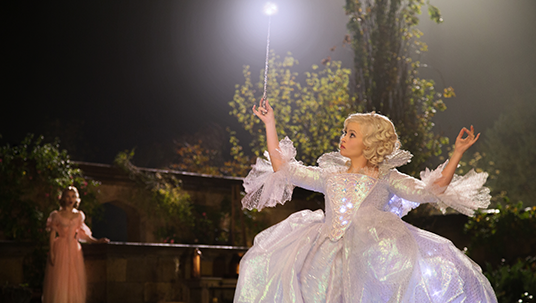 On directing Cinderella for Disney:

Branagh: “I felt they were at the start of a reinvention that meant the atmosphere was new and innovative, and frankly, not dissimilar to the atmosphere I felt at Marvel while I was there with Thor—which was only the third of the pictures in their first phase of their epic journey. So there’s a sense of filmmakers being at the beginning of something new and different, and that they’re excited about, so it was a good atmosphere to be in.”

On what lies ahead:

Madden: “I know I’m dying to go back on the stage with some thought to going with Ken and Lily in 2016. We’re doing Romeo and Juliet in London, because we all got on so well, which is great.”