Whether you’re a Jedi in a galaxy far, far away or a Star Wars fan a little bit closer on Earth, everyone needs time to take care of their mental health. Luke learned to find balance in the Force through Yoda... for us Earthlings, we can use YouTube—specifically, the Star Wars Mindful Matters series on the Star Wars Kids YouTube channel! As you make your resolutions for the new year and plan your 2023, we hope you’ll plan to take care of yourself, and thankfully the Star Wars Mindful Matters series is here to help.

Launched on May the 4th in 2022, Star Wars Mindful Matters was created by Ashley Eckstein (voice of Ahsoka Tano on Star Wars: The Clone Wars and beyond) and produced in collaboration with Citrone 33. Each of the five episodes is hosted by Eckstein, who guides viewers through exercises that better connect you to your mental health—and the Force. Sometimes that means practicing breathing techniques; other times it could be roaring like a Wookiee! 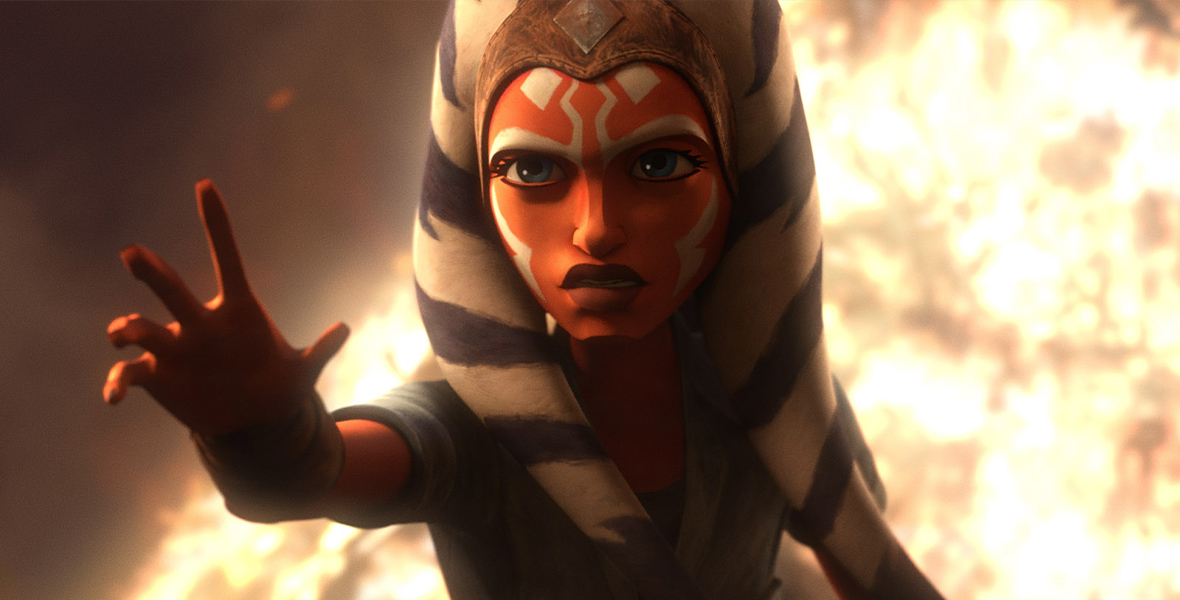 If this series is sounding like an out-of-this-world way to fulfill a new year’s resolution or two, read on to hear from Eckstein herself about the series and why it means so much to her:

D23: The Official Disney Fan Club: How did you originally come up with the concept of the Star Wars Mindful Matter series?
Ashley Eckstein (AE): Star Wars Mindful Matters goes way back to when I first debuted as the voice of Ahsoka Tano in 2008. I started doing Star Wars Weekends at the [Disney] Parks and would do autograph signings every day and meet a ton of kids. The number one questions from kids was how they could be a Jedi, just like Ahsoka. We learned from the Star Wars story that training your mind is just as important as physically training your body. Jedi Master Yoda teaches us that a Jedi must have the deepest commitment; the most serious mind. Luke Skywalker teaches Rey that confronting fear is the destiny of a Jedi. Each episode of Star Wars Mindful Matters is a lesson that we learn in Star Wars paired with a clinically based mindfulness exercise or lesson. I worked with the Lucasfilm Story Group to make sure that the lessons from Star Wars were accurate and truly based in the Star Wars story. Then I worked with Nationwide Children’s Hospital to make sure each exercise or lesson was clinically based, and I paired the two together.

D23: How do you go about creating an episode of Star Wars Mindful Matters? Do you start with the mental health exercise or the Star Wars connection first?
AE: It’s important to me that it starts with the story, because as fans, we really relate to these characters, and we really relate to the lessons from our favorite Disney stories. Then I work with the doctors and the child-life specialists to make sure we pair the right clinically based exercise with that moment and the lesson that you’re learning. The nice part is that all of these very, very important life lessons are already in the stories. We’re not making anything up.

D23: Do you have a favorite out of the exercises you’ve done so far for the series?
AE: My favorite is the Cave Challenge, because I’ve watched these scenes with Luke and Yoda training in Degobah, or Rey training with Luke on Ahch-to, over and over again, but for the longest time I didn’t realize that the cave represented their mind. When I made that connection, I realized that on a daily basis, I’m failing this Cave Challenge. I’m approaching certain things with fear and worry and doubt, and then I’m bringing that fear, worry, and doubt to my everyday life. The Cave Challenge helped me with Star Wars Mindful Matters because it was the first time that I ever wrote a script for Star Wars!

I was incredibly nervous and incredibly doubtful. I really had severe writer’s block. My doubt was so strong that I paralyzed myself with fear and I didn’t think that I could do it. So, I had to do the Cave Challenge for myself and then I also took some deep breaths, I calmed my mind, I got my mind to a place of peace and calm. Then I walked back into my cave with calm and peace and positivity. When I broke it down into small steps, and when I brought in a positive attitude, I was able to write all five scripts.

D23: Speaking to a specific video from the Star Wars Mindfulness Matters series, did you practice the roars you did in the Wookiee Roars video? Or did you come up with them in the moment?
AE: Okay, well here’s the whole story behind it. I couldn’t do a Wookiee roar. I put out a call to action on social media prior to filming the video, and I asked fans for their help, and they gave me some really, really good tips. I practiced for a couple of days and I still couldn’t do it. I had this kind of guttural thing that sounded more like a truck backing up!

When we went to film it, I said, “Look, I still can’t really do a Wookiee roar, so can we do something in post-production that enhances it a little bit?” That’s what I thought that we were going to do. So, I wasn’t really even trying, because I’m like, “Oh, it’s going be fixed in post-production.” Then Ian Bucknell, our director from Lucasfilm Home Video production, tells me afterwards, “Ashley, we’re going use them exactly as is.”

D23: How did you get involved with On Our Sleeves, the movement for children’s mental health, powered by the behavioral health experts at Nationwide Children’s Hospital?
AE: I was on a book tour for my very first book that I ever wrote for Disney called It’s Your Universe: You Have the Power to Make it Happen. In the middle of this book tour, I was set to do a book signing at Nationwide Children’s Hospital in Columbus, Ohio. They are the leaders in children’s mental health in our nation. In the middle of doing this book tour, I became a victim of cyber bullying. It was awful—it was extremely overwhelming. I showed up to this signing at Nationwide Children’s Hospital, completely broken. I went to help the patients and their families, but really, I showed up in need of help. The hospital just wrapped their arms around me.

After about five days, we were able to get the cyber bullying under control. The biggest thing that concerned me was that I’m an adult going through this, and it really, really affected my mind. I don’t know how a kid would go through something like this and without the same support that I had. I pledged to be a voice for others from that day on. Oftentimes kids don’t know how to share their emotions.; they don’t know how to reach out and ask for help. That’s what’s been very important to me is to teach others the tools that they need for their mental health.

D23: Why is teaching mindfulness important to you?
AE: Our mental health is just as important as our physical health. You can’t have one without the other—and one is not more important than the other. There’s been such a stigma surrounding mental health and there shouldn’t be—especially after the past years that we’ve been through. There’s not a single person that is untouched from the past three years. It’s all affected us in some way. We wanted to create a free resource for fans to be able to learn and benefit from this series.

Our goal is to be able to teach these very important life skills, but in a way where it’s accessible and safe and friendly for everyone. Sometimes I need the extra motivation. If I feel like I am training to be a Jedi—well, then that is so much more exciting! I’m just really hoping that by creating this free resource for all fans, that they will feel comfortable doing them. These are meant to be daily exercises that whenever you’re feeling nervous or worried or you just need to start your day on the right foot, that you’ll be able to turn to these exercises.

Ready to start training like a Jedi? You can watch all the videos in the Star Wars Mindful Matters series here.