The thoughtful and cheerful little Orange Bird has been an emblem for Walt Disney World Resort since the beginning. Always a friend to all, the Orange Bird loves to meet new friends and assist in good deeds. However, he does not communicate by sounds or tweets. Rather, this tiny, happy, flying bird thinks of exactly what he wants to express, and an orange cloud appears over his head to convey what he is thinking. Hatched just before the opening of Walt Disney World, the Orange Bird’s first appearance happened on March 3, 1971, at a press event in Lakeland, Florida. Since then, the Orange Bird has been a tremendously popular character that has evolved with new artwork and stories over time. 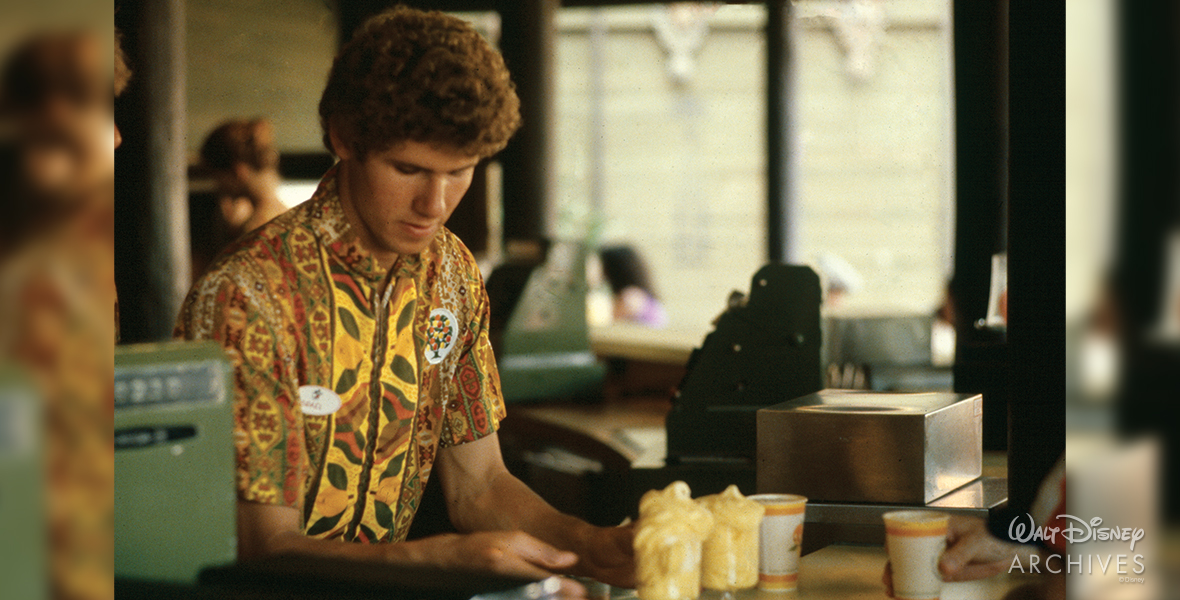 At the outset, the Florida Citrus Commission needed a persona to represent its fresh Florida citrus. The creation of the Orange Bird stems back to Disney Legend and animator Bob Moore, along with publicity art designer Don MacLaughlin, who together crafted the Orange Bird specifically for the Florida Citrus Commission in 1969. The Orange Bird swung from a branch on the mythical Sunshine Tree inside the Sunshine Tree Terrace restaurant at the Magic Kingdom Park. As guests left the Tropical Serenade attraction (currently known as Walt Disney’s Enchanted Tiki Room), they were greeted by Orange Bird at the Sunshine Tree Terrace, where there were plenty of citrus products on hand to enjoy. A few of those citrusy items included traditional orange juice served in Orange Bird paper cups, as well as thirst-quenching orange slushes, the O.J. Hot Sipper for the winter season, and the mouthwatering citrus swirl soft serve. As the mascot of the Sunshine Pavilion, it was only natural to have a walkaround character of the Orange Bird allowing guests to snap pictures and create orange-filled memories with him. Credit for the adorable, strolling character of the Orange Bird goes to Disney Legend and Imagineer Bill Justice, a 42-year Disney veteran that helped animate such films as Alice in Wonderland (1951) and Peter Pan (1953). The Orange Bird appeared on billboards, in television commercials, and on merchandise, with guests getting to know him before they even set foot in the park. In addition to Sunshine Pavilion, the Orange Bird sometimes flew over to the Lake Buena Vista Shopping Village (now Disney Springs) to promote Florida citrus products in the mid-1970s. The Orange Bird could be spotted at the former Captain’s Tower shop (now Disney Pin Traders) with welcoming signage and a larger-than-life-sized Orange Bird statue. The character had become a symbol of Florida to park visitors around the world and promoted the Florida oranges and juice. As the Florida slogan went, “A day without Florida orange juice is like a day without sunshine,” and the Orange Bird was always ready to think orange thoughts. 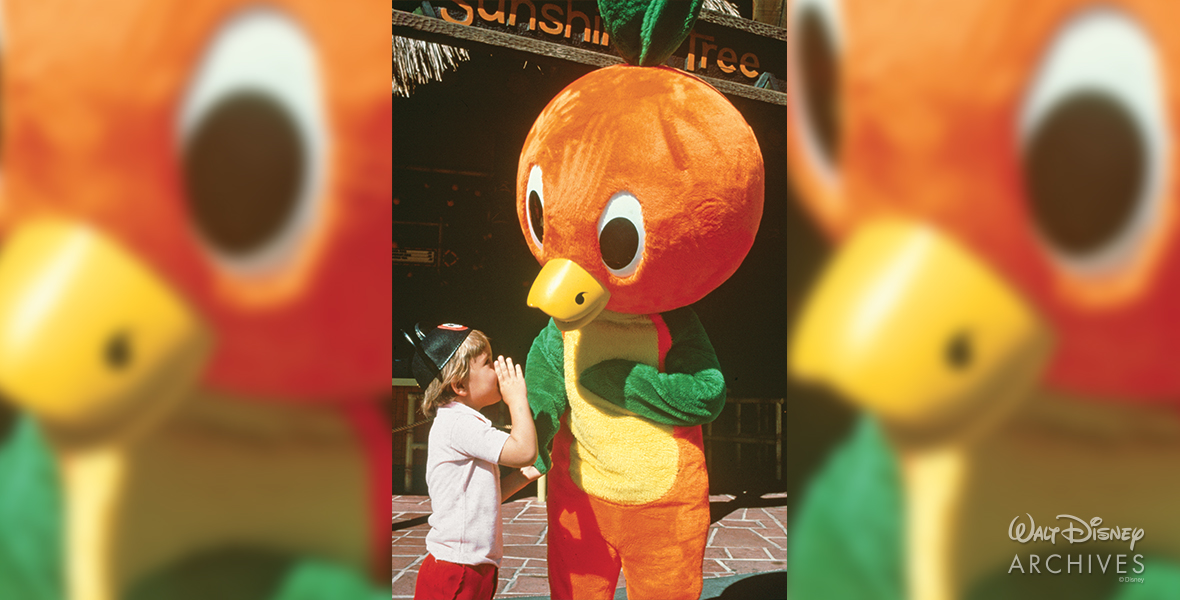 The brilliant songwriting duo the Sherman Brothers introduced the new character to the world through the 1971 album, The Orange Bird. Disney Legends Richard and Robert Sherman created all-new songs for Disney’s newest character with the exception of one song, “I’ll Fly the Skyway.” This song was originally written for Thomas O’Malley in The Aristocats (1970) with the original title of “My Way’s the Highway.” Instead of scrapping a perfectly good song, the Sherman Brothers reworked it into The Orange Bird Storyteller LP.

As for the narration, Vince Jefferds, who was formerly the Vice President of Sales Promotions, assisted in the creation of the story of the Orange Bird. The record tells the story of the “fluffy little puffy sight to see” who was rejected by other birds since “all the thoughts he ever spoke appear in orange smoke.” The Orange Bird decides to go down south to find new friends, where he runs into an alley cat, mistakes a traffic light for another orange bird, and eventually finds a home with a picnicking family.

Renowned voice talent for the album included Robie Lester, Sam Edwards, and Ron Howard. Robie had a great deal of credits to her name, including the sped-up voice of Dale from the famous chipmunk duo, the singing voices for Eva Gabor’s Duchess (The Aristocats, 1970) and Bianca (The Rescuers, 1977), and the theme song performer for The Three Lives of Thomasina (1963). Edwards also had many Disney voice acting credits, beginning with the adolescent voice of Thumper in Bambi (1942) and many Disneyland Records characters, such as the Big Bad Wolf in the 1958 album version of Three Little Pigs. Filmmaker and actor Ron Howard provided his voice to other characters in Disneyland Records albums like Mike from The Story and Song from The Haunted Mansion (1969) and Woot from The Tin Woodman of Oz (1970). The Orange Bird album would mark all three actors’ final LP performance for Disneyland Records. 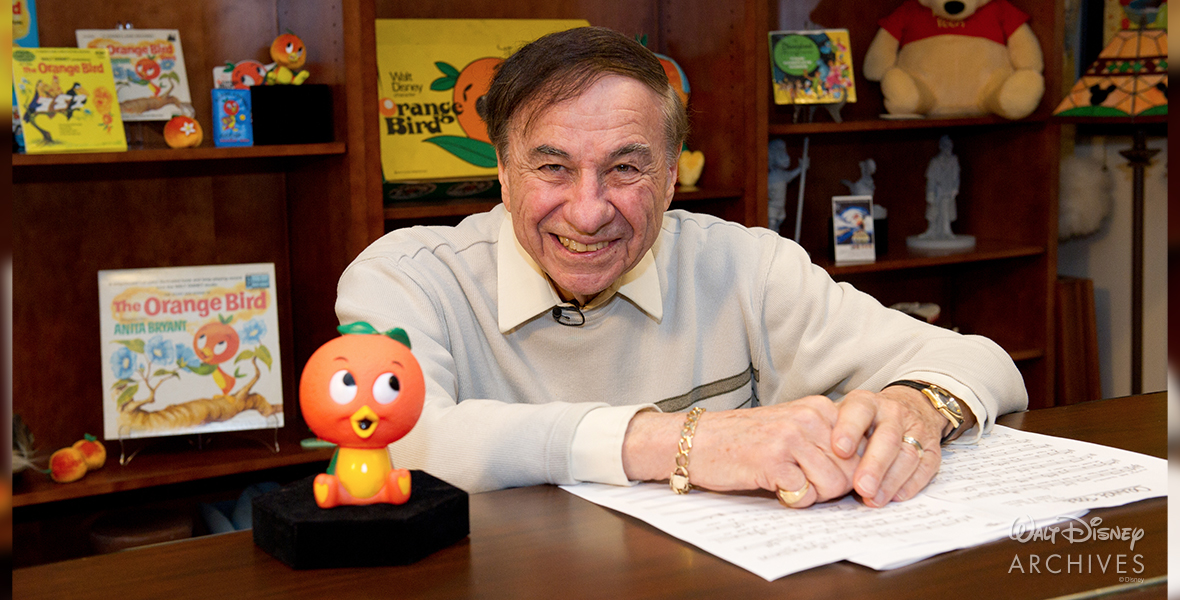 The Orange Bird would fly his “leafy wings” again in September 1980 to star in Foods and Fun: A Nutrition Adventure, an educational film that promoted the importance of plentiful sleep, nutritious meals, and vigorous exercise. Through all his hard work, the Orange Bird was able to have the energy to fly south for the winter where he met a family to join in with the warm weather activities. The animated short was directed by Rick Reinert, who helped create a few of Disney’s educational featurettes, with music by Will Schaffer, known more commonly as Will Schaefer, who composed the background music of many Disney television films and series like Walt Disney’s Wonderful World of Color and The Wonderful World of Disney. Even though the Orange Bird does not speak, he was accompanied by a flock of renowned voice actors that included Rex Allen, June Foray, Ilene Latter, and Hal Smith. The names and voices from this film may seem familiar to many Disney fans. Rex narrated many films and television shows along with theme park attraction characters like “Father” in General Electric’s Carousel of Progress eventually becoming the “Grandfather” when the attraction was updated in 1993 and the riverboat captain from the Liberty Belle Riverboat in Magic Kingdom Park. June voiced many television and film characters such as Witch Hazel in Trick or Treat (1952), Grammi Gummi on Disney’s Adventures of the Gummi Bears, and Grandmother Fa in Mulan (1998). Lastly—and to show off his vocal range—Hal famously voiced Owl in The Many Adventures of Winnie the Pooh (1977) along with subsequent Winnie the Pooh films, Goofy in Mickey’s Christmas Carol (1983), and Gyro Gearloose from DuckTales. 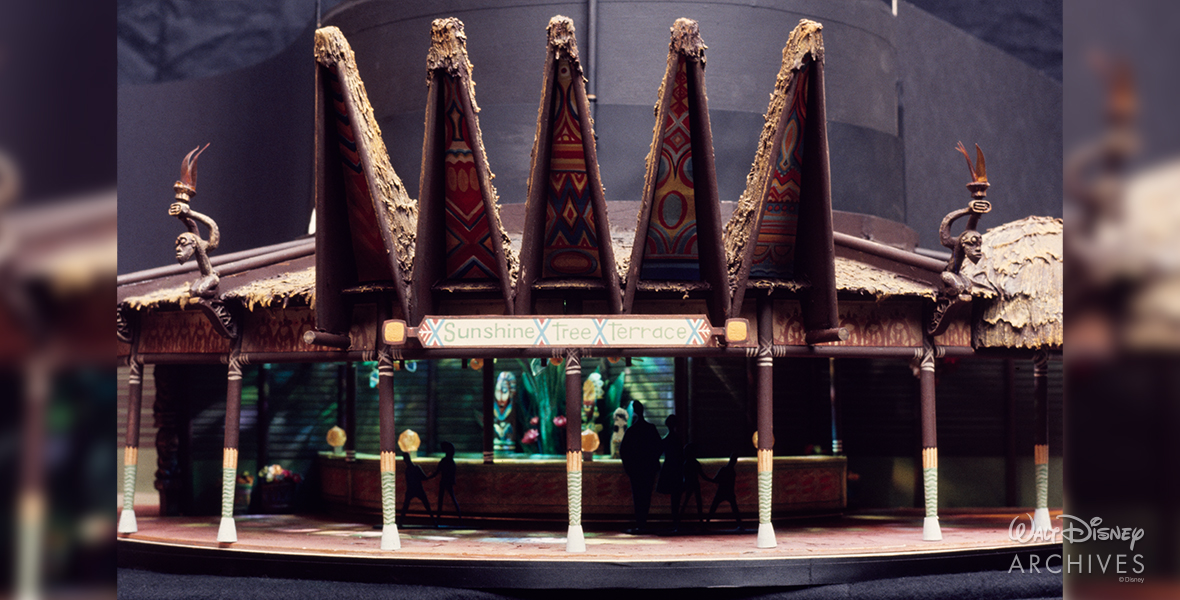 The partnership with the Florida Citrus Commission lasted from 1971 until its contract expired in 1987. Just like the record album, the Orange Bird took a little vacation and after 25 years, he flew back to his home in the Sunshine Tree Terrace just in time for the 40th anniversary of Walt Disney World Resort. After a major refurbishment of the Sunshine Tree Terrace—from the thatched roof to painted graphics—in 2012, the Orange Bird was revealed on the new sign and the original 1971 figure was returned to the quick-service restaurant. Imagineer Jason Grandt sought out the original figure and brought back a slice of 1971 to the park through the refurbishment of the Orange Bird figure. The Orange Bird has since been revitalized in different merchandise items such as mouse ears, pins, and apparel that have been popping up ever since. The Orange Bird also makes small appearances in both Trader Sam’s Enchanted Tiki Bar at the Disneyland Resort and Trader Sam’s Grog Grotto at the Walt Disney World. In the Disneyland Hotel location, a small note appears next to the Orange Bird figure in the bar notating, “Traded for this because I thought it had appeal.” Naturally, the Orange Bird made his way back to the Disney Springs shopping district after promoting Florida citrus in one of its previous shops with a vintage Orange Bird art mural that is a celebration of Florida history. In 2022, the Orange Bird made his Golden Books debut with new Sunshine Tree adventures on a Florida farm with a menagerie of new friends and some familiar Disney birds. The book is affectionately written by Jason and illustrated by Scott Tilley. 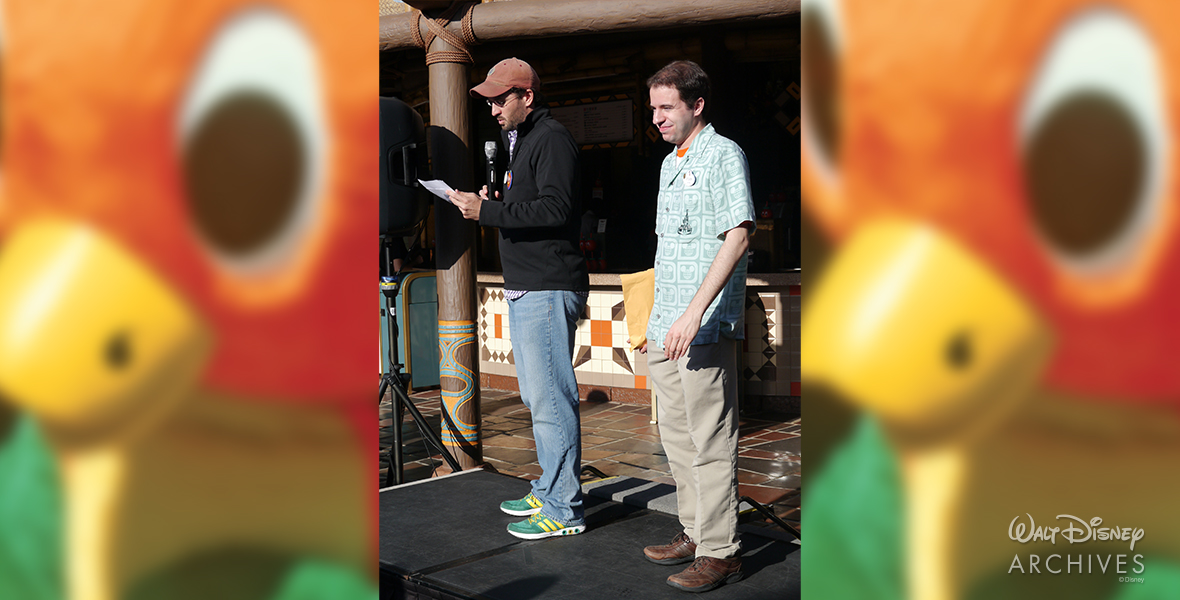 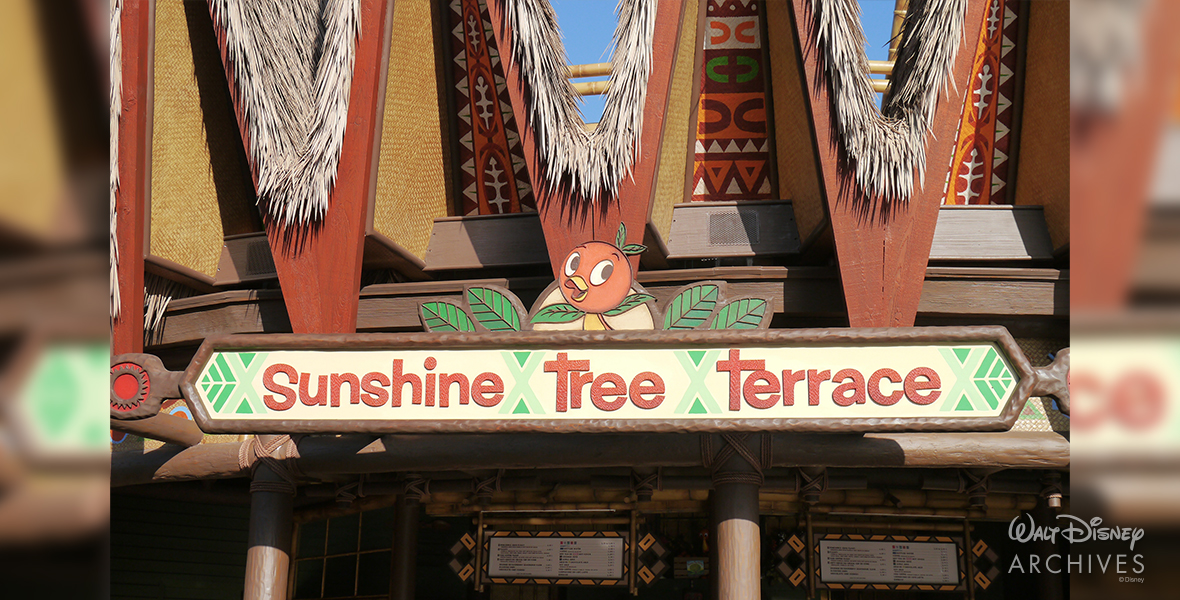 The location of the Sunshine Tree Terrace has moved in Adventureland, but the Orange Bird is still a representative of the land. The character has brought joy to park visitors around the world and even “though his little beak, can’t even peep a squeak,” he captures our hearts and imaginations. Next time you visit the Magic Kingdom Park, make sure to visit the Orange Bird for a citrus swirl and think of something sunny just for him! 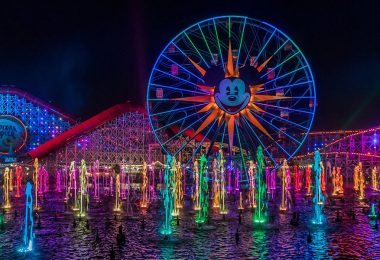 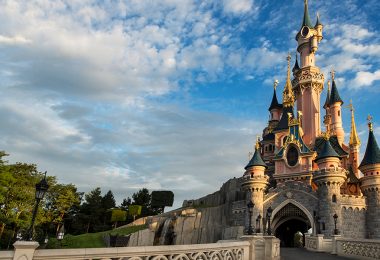 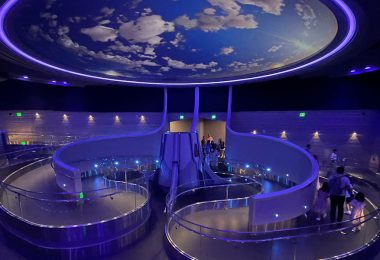 First Look Inside the Queue for Guardians of the Galaxy: Cosmic Rewind at EPCOT