We’re now officially celebrating Disney100—and as part of the party, the brand-new nighttime spectacular World of Color – One will debut at Disney California Adventure Park on January 27. Our friends at Disney Parks Blog just released a new peek at the spectacular, and it looks to live up to that moniker:

This new spectacular honors how a single action, like a drop of water, creates a ripple that can grow into a wave of change. Guests will discover how it only takes one action to make an impact on the people in their lives, as well the world around them—just as one man, Walt Disney, started the wave that has continued to inspire people around the globe for a century. It’s the first Disneyland Resort nighttime spectacular to feature characters, music, and moments from Walt Disney Animation Studios, Pixar Animation Studios, the Avengers, and Star Wars in the same production; moments from films including The Lion King, Moana, Coco, Mulan, Soul, and so many more will materialize on an incredible water screen that can span up to 380 feet across.

With an inspiring message that illustrates the storytelling legacy Walt began 100 years ago, World of Color – One is just one of many new experiences and special offerings coming to Disneyland Resort in honor of The Walt Disney Company’s 100th anniversary in 2023… including the premiere of another all-new nighttime spectacular, Wondrous Journeys, at Disneyland Park, also on January 27!

Here we are, officially arriving at the first full weekend of the new year! What’s in store from around the worlds of Disney? Perhaps most notably, the broadcast debut of The Proud Family: Louder and Prouder on Disney Channel! Meanwhile, ABC’s The Wonderful World of Disney returns with Beauty and the Beast … and there’s much more where that came from.

Here’s some thrilling news for Disney+ viewers: Earlier this week, it was announced that Marvel Studios’ Black Panther: Wakanda Forever will debut on the streaming service February 1.

In anticipation of the film’s upcoming streaming debut, Proximity Media, in collaboration with Marvel Studios and Marvel Entertainment, released Wakanda Forever: The Official Black Panther Podcast. Audiences are invited to listen and learn about the exciting and emotional journey to make the film over the course of six episodes. The first episode is out now on the Wakanda Forever: The Official Black Panther Podcast feed, available on all major podcast platforms and at ProximityMedia.com. Five additional episodes will be available weekly beginning January 18. 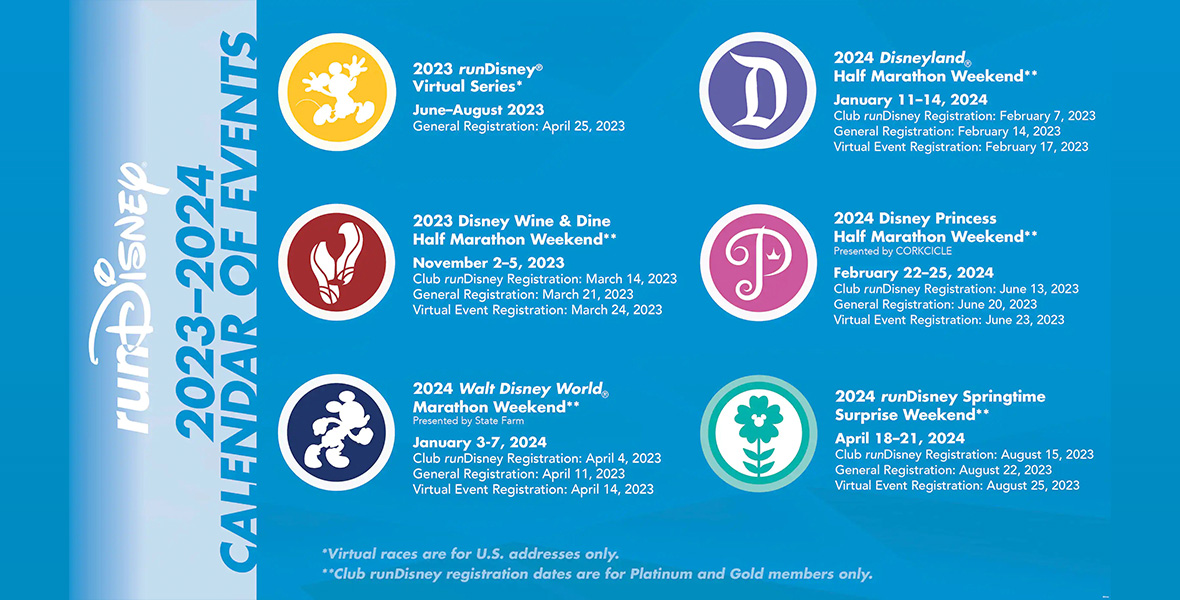 Here’s a great way to keep up a New Year’s resolution: The good folks at runDisney recently shared event and registration dates for the 2023-24 race season, including information on the highly anticipated return of the Disneyland Half Marathon Weekend in 2024!

With entertainment, beloved characters, and Disney magic at every mile, every runDisney race is an unforgettable experience for runners of all ages and skill levels. The image above (courtesy of Disney Parks Blog) shows a calendar of events for the upcoming season.

The 2023 runDisney Virtual Series will take place from June–August 2023; general registration for the virtual series begins on April 25. All virtual races are for U.S. participants only. Meanwhile, the fan-favorite Disneyland Half Marathon Weekend will return to the Happiest Place on Earth between January 11-14, 2024, and will include three endurance events, a challenge, and more!

With the return of the Disneyland Half Marathon Weekend, runDisney will also reintroduce the runDisney Coast to Coast Race Challenge in 2024! More information about the challenge and how to qualify will be available on runDisney.com later this month.

Go Behind the Scenes with SuperKitties

There are four paw-some new hero kittens arriving on the animated-series scene, courtesy of Disney Branded Television, in the form of SuperKitties—and D23 was lucky enough to chat with series creator Paula Rosenthal about how the show came to be. Check it out by clicking here.

This very weekend, Pixar Day at Sea will make its big Disney Cruise Line debut onboard the Disney Fantasy—bringing to life the ever-evolving stories of our favorite Pixar toys, monsters, and heroes during one truly incredible day at sea! Take a look at some Pixar friends getting the Disney Fantasy ready for all the fun in the video above.

On select seven-night sailings through mid-March, families will encounter more Pixar characters than ever before during this day-long celebration… including meet-and-greet opportunities, dance and pool parties, family activities, and even an all-new nighttime spectacular. Tons of new themed food and beverage items will also be available during these voyages, including a breakfast with Toy Story’s Woody and friends, sweet treats that are sure to delight, and a Pixar-inspired dinner.

For more info on all manner of amazing upcoming sailings, visit DisneyCruiseLine.com.

Barbara Walters, named a Disney Legend in 2008, passed away last week at the age of 93. From her early days on NBC’s Today through to her creation of ABC’s long-running talk show The View, Walters was a true broadcasting pioneer. Read more about her extraordinary—and groundbreaking—life, including thoughts from Disney CEO Bob Iger, here at D23.com.