Are you ready to learn once more with the ever-adorable Doc McStuffins? The popular Disney Junior series is returning with a brand-new TV special, premiering Friday, December 4 (7:30 p.m. EST/PST), on Disney Junior; called “The Doc is In,” the special features the beloved animated icon interacting with real kids, families, and medical professionals all about healthy habits—and it coincides with National Handwashing Awareness Week!

Set to some of the series’ beloved songs, the special also includes medical professionals Dr. Myiesha Taylor, MD, founder of the Artemis Medical Society and the “We Are Doc McStuffins” movement; and Mark Lee, RN, who provides tips to preschoolers about ways to prevent spreading germs. It all comes on the heels of Disney Junior and Doc McStuffins having recently joined forces with the World Health Organization for a PSA—meant to spread a message about thorough hand washing as a way to prevent the spread of germs and disease—released on Global Handwashing Day, this past October 15. Check out the PSA, above.

The Peabody Award-winning series also inspired a new addition to its award-winning retail line with the Doc McStuffins “Wash Your Hands” Singing Doll from Just Play. The doll comes with an interactive stethoscope, facemask, doctor’s bag, thermometer, and otoscope, and sings the popular “Wash Your Hands” song from the series (and seen in the PSA). Coinciding with the doll’s launch, Disney Junior and Just Play will donate funds to Feeding America, which will provide two million meals to families across the country! How cool is that?

So scrub up those hands and settle in for some Doc McStuffins fun this December!

As we hop, skip, and jump ever closer to Thanksgiving, there’s a whole weekend upcoming during which we can settle in for some choice TV viewing from around the worlds of Disney. The season finale of One Day at Disney on Disney+; the 2020 American Music Awards, hosted by Taraji P. Henson, on ABC; and so much more. And after said viewing, you can keep settling in for that long winter’s nap we hear so much about…

Get Magical with New Trailer for Disney+’s Godmothered

What better time to follow the adventures of a fairy godmother than the holidays, right? So we’re positively bedecked with boughs of holly over this brand-new trailer for Disney+’s upcoming original film Godmothered.

Debuting exclusively on the streaming service in just a few weeks’ time, this enchanted new Christmas comedy introduces audiences to Eleanor (Jillian Bell)—a young, inexperienced fairy godmother-in-training. Upon hearing that her chosen profession is facing extinction, she decides to show the world that people still need fairy godmothers. Finding a misplaced letter from a 10-year-old girl in distress, Eleanor decides to track her down. She discovers that the girl, Mackenzie (Isla Fisher), is now a 40-year-old single mother working at a news station in Boston. Having lost her husband several years earlier, Mackenzie has all but given up on the idea of “Happily Ever After.” But Eleanor is bound and determined to give Mackenzie a happiness makeover… whether she likes it or not.

Disney and ABC are kicking off the holiday season with a fifth anniversary edition of a jingly, jangly favorite. The Wonderful World of Disney: Magical Holiday Celebration features original hosts Derek and Julianne Hough, who off the night with a glittering new holiday performance… while Trevor Jackson (Freeform’s grown-ish) hosts from Walt Disney World Resort. And together, they’ll take viewers on a wintry ride through fan-favorite performances from the past five years and new heartwarming family moments. Viewers will also get a brand-new sneak peek into Remy’s Ratatouille Adventure coming in 2021 to EPCOT.

In addition to magical holiday moments, viewers will also get a sneak preview of Disney and Pixar’s all-new feature Soul before it becomes available exclusively on Disney+ beginning December 25. Featuring the voices of Jamie Foxx and Tina Fey, Soul introduces a middles-school band teacher who teams up with a sarcastic new soul on a mission to figure out exactly what makes life worth living.

Look for The Wonderful World of Disney: Magical Holiday Celebration airing Thanksgiving night, Thursday, November 26, at 9/8c, only on ABC!

If you’re anything like us, you’ve missed the theatrical shenanigans of Disney+’s High School Musical: The Musical: The Series lo these last eight or so months… but we’re thanking Santa for the early gift of a brand-new holiday special featuring all of our HSM:TM:TS favorites! Read up on what you can expect right here at D23.com.

Earlier this week, the world heard some pretty amazing updates from Josh D’Amaro, Chairman of Disney Parks, Experiences and Products, when he took the stage at the IAAPA Expo: Virtual Education Conference. In case you missed it, do be sure to check out our rundown of some of the truly incredible stuff coming to Parks and Resorts around the world. 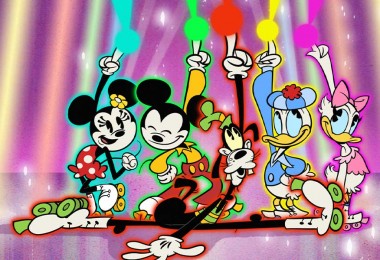