Home / News / Headlines / How The Banshees of Inisherin Explores Heartbreak and ...

Written and directed by Martin McDonagh, Searchlight Pictures’ The Banshees of Inisherin—playing exclusively in theaters beginning Friday, October 21—follows lifelong friends Pádraic Súilleabháin (Colin Farrell) and Colm Doherty (Brendan Gleeson), who find themselves at an impasse after one unexpectedly ends their friendship. “The Banshees of Inisherin is the story of an island, the small group of people on that island, and two friends who early on in the film are forced by the decision of one friend to go their separate ways,” Farrell says. “The other friend finds that particularly hard to deal with.”

The film (intended for mature audiences) is set in 1923 on a remote island off the west coast of Ireland, far from the Irish Civil War raging on the mainland. The narrative blends comedy and tragedy to present an intimate portrait of humanity—a hallmark of McDonagh’s films. When the story begins, all seems well. As part of their daily routine, Pádraic and Colm usually meet at 2 p.m. to go for a drink in the only pub on Inisherin. Things take a turn, suddenly, on the day when Colm decides to ignore Pádraic’s call. “Colm starts acting very strangely and starts avoiding Pádraic,” says Gleeson. “Colm doesn’t answer the door, which is how we start off the journey. That’s how it begins, with the shutting of a door against a good friend… for no apparent reason.”

Saddened and stunned, Pádraic tries to repair their relationship, refusing to take no for an answer. But Pádraic’s determination only strengthens Colm’s resolve—and when Colm responds with a desperate demand, things escalate with shocking consequences. Colm believes he has a good reason for cutting Pádraic out of his life, according to McDonagh. “He doesn’t want to waste his time anymore. He wants to devote himself to artistic enterprises: music or thought. Pádraic is the fallout from that decision,” he says. “Until this point things have been easygoing, but Colm is older than Pádraic by 15 or 20 years. Colm identifies that time is precious. He sees him as a waste of time.”

“Colm decides to embrace art and creativity as the most important thing in life and it leads to hellish consequences,” echoes Gleeson. “Pádraic chooses to be nice, and he ends up with hellish consequences as well. The Irish Civil War was a tragedy—that’s the context here. Through examining it and trying to understand how things can get dragged out of shape, maybe we can face it down and not take that path. I hope the film will remind people that making nasty or harmful decisions has a lasting effect.” 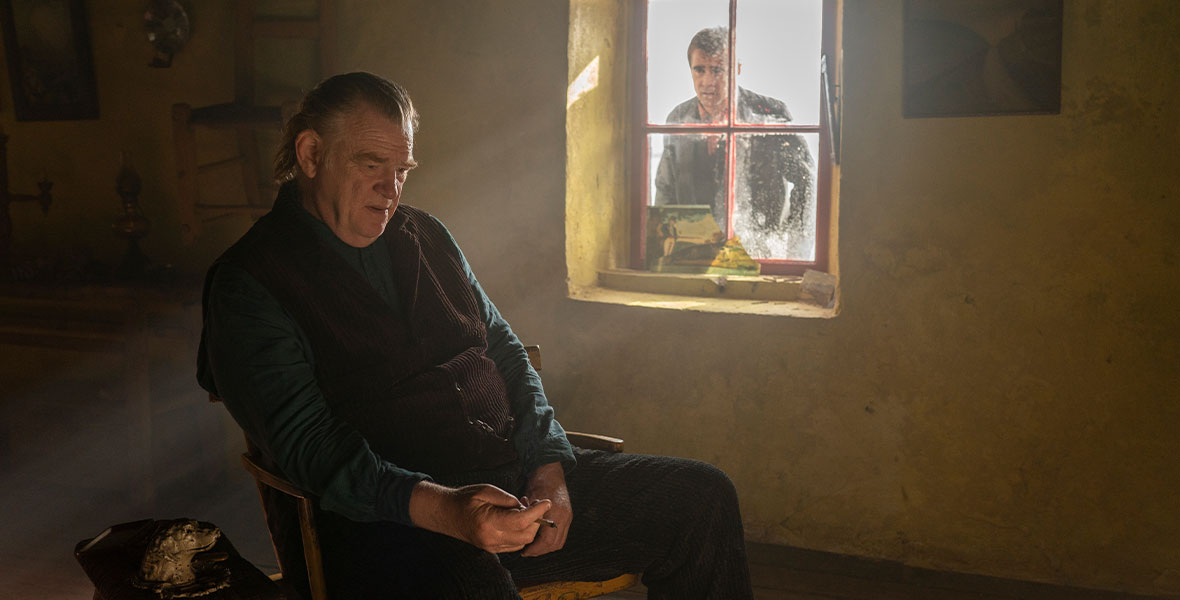 Farrell describes Pádraic as “a nice, simple lad,” saying, “He’s happy as long as the animals are fed and he has a couple of pence in his pocket for a few pints and a chat with his friend Colm every day. As long as that’s all happening, then life is just grand.” After the relationship ends, Pádraic struggles. “His loss of innocence is the saddest part of the film,” he says. “He falls apart. He’s not anywhere near as happy as he once was.”

McDonagh—who previously directed Farrell and Gleeson in his debut feature, In Bruges (2008)—is curious to see how audiences respond to The Banshees of Inisherin. “Do you devote yourself totally to life as an artist, and disregard friends or lovers or family? Is work the most important thing? Does it matter who gets hurt in the process?” he asks. “It’s a debate that isn’t answered by me or the film. I don’t think that you have to be a self-flagellating or dark or hateful person to do any kind of art, even dark art. But I definitely think the film explores that interesting conundrum.”