There was sweltering heat outside the Anaheim Convention Center this afternoon, but Hall D23 at D23 EXPO 2015 was the coolest place on the planet! Frozen FANdemonium: A Musical Celebration! was an unforgettable, once-in-a-lifetime experience that included behind-the-songs and stories and spectacular guests, and showed us what frozen things do in summer—they go to D23 EXPO!

Chris Montan, president, Walt Disney Music, hosted the event, exclusive to D23 EXPO and “never-before and never-again” to be seen. He explained that Frozen came about because John Lasseter, chief creative officer for Pixar and Walt Disney Animation Studios, had wanted to make an “integrated” movie like Beauty and the Beast or The Little Mermaid, where “the songs push the emotional aspect of the story, but more importantly, they raise the emotional stakes for the characters.” 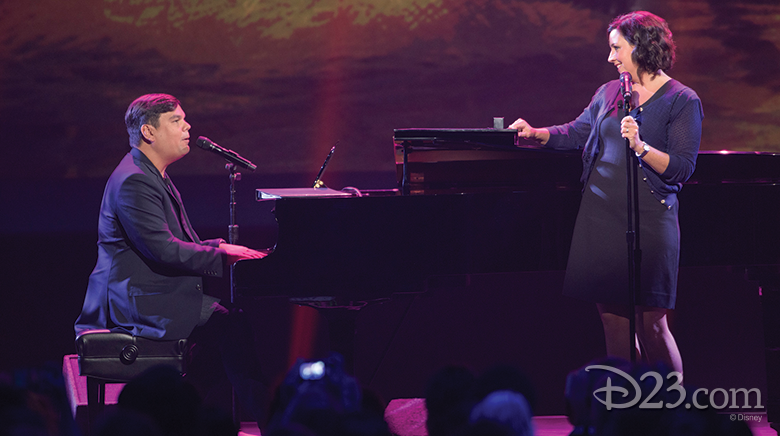 During the next 90 minutes, Award-winning songwriting team—and, quite possibly, the most adorable couple on the planet—Kristen Anderson-Lopez and Robert Lopez, led us through the process of creating the songs that will now be sung by generations of Disney fans. Their first exposure to Frozen came when director Chris Buck and Peter Del Vecho showed them a visual development image of two young girls in a glade. As the parents of two daughters, it captivated them and, Anderson-Lopez adds, “I was excited to evolve the idea of a Disney princess.”

The audience was treated to the demo of “You’re You,” the first song that was written for the film… which had to be cut because it hinted too early that Hans was a wolf in sheep’s clothing. As Anderson-Lopez pointed out, Hans interrupted Anna—and no real romantic hero would ever dream of interrupting Kristen Bell’s singing. So the Lopezes dug a little deeper and came up with “Love Is An Open Door,” which, they explain, was intended to feel like the perfect first date—and, Anderson-Lopez reveals, was inspired by the date in the film The Karate Kid.

The afternoon became a family affair, thanks to the Lopezes’ daughters, Annie, who helped sing “Fixer Upper” and Katie, who came to the stage for “Do You Want to Build a Snowman?”—which she performed with director Jennifer Lee’s daughter, Agatha… and surprise guest Kristen Bell! Montan asked Bell to name the best part of playing Anna, and the irrepressible actress said that she loved Disney princesses but felt, “The goofy girls were being underrepresented a little bit.” She was thrilled to help bring a different kind of Disney princess to the screen.

Of course, you can’t have Frozen FANdemonium in triple-digit heat without a sun-worshipping snowman, so Olaf—and the gifted actor and singer who voices the role, Josh Gad—were the next thrilling surprises to perform “In Summer.” 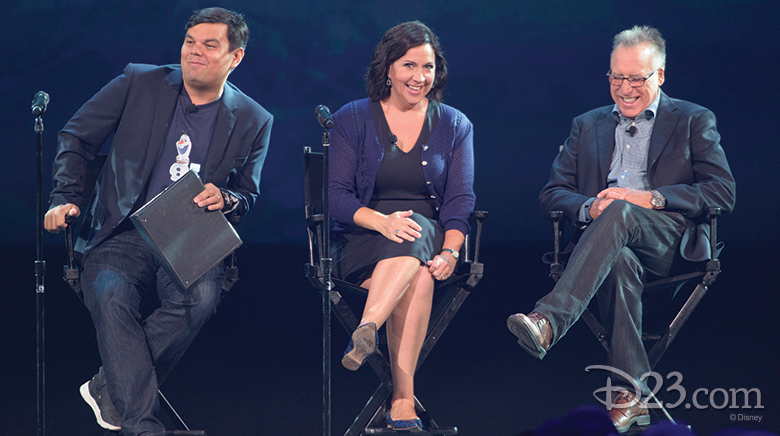 And then it was time to “Let It Go.” The song, Anderson-Lopez explains, was fleshed out while the couple was walking through the part, talking about what “letting go” really meant to them. They wrote a demo, sent it to the creative team in Burbank, and were thrilled to hear that when John Lasseter heard it for the first time, he jumped up in the room and started making the kinds of motions he could envision Elsa making while she sang.

Lasseter joined the Lopezes; Montan; Bell and Gad; filmmakers Buck, Del Vecho, and Lee; and our favorite folks from Arendelle, Anna, Elsa, Olaf, and Kristoff, for the grand finale—complete with snow. Well, it may have been confetti shaped like snowflakes… but the moment—and, indeed, the entire presentation—gave us chills nonetheless. This was truly a D23 EXPO experience worth melting for. 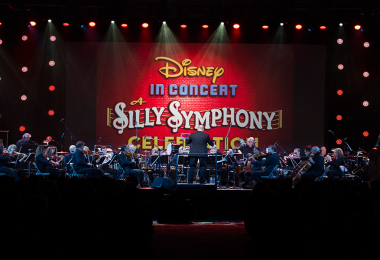