Disney•Pixar’s Inside Out offered audiences an exhilarating look inside Headquarters, the control center within 11-year-old Riley’s mind. Today at D23 EXPO 2015, Stage 28 was the “headquarters” where the filmmakers behind Inside Out took guests on a funny and fascinating look into the creation of this hit film. In the exclusive presentation at D23 EXOPO 2015’s Stage 28, In Conversation with the Filmmakers and the Emotions Behind Inside Out, Academy Award®-winning director Pete Docter and producer Jonas Rivera regaled D23 EXPO attendees with insider info that was fun, intriguing, and yes, emotional. With humor and insight, these Pixar pros gave an authentic taste of their creative process by tracing the development of the character of Sadness. As an extra added treat, Phyllis Smith (The Office), who voiced the lovably downhearted character, joined the panel to add her own unique perceptions. 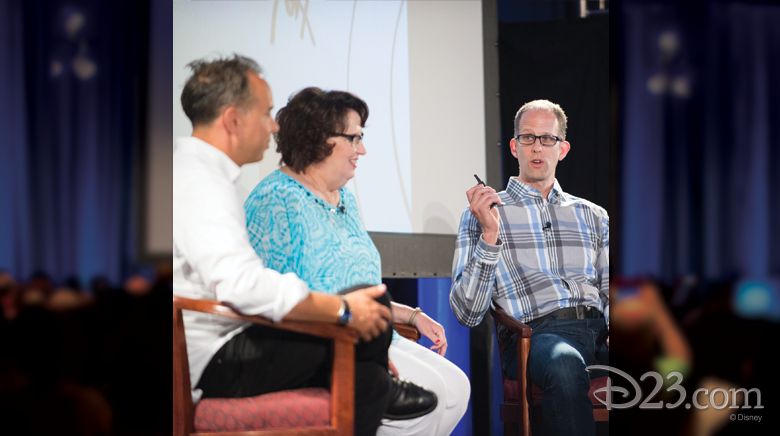 Rivera and Docter shared exclusive photos of artists, outlines, and even offices at the Pixar plant in Emeryville to give the audience a true sense of “you-are-there.” Docter revealed that the idea for this high-concept animated feature orginated with his daughter Elie, who as she entered her tweens became more moody. “Growing up is hard,” Docter noted, and this led to the idea of a movie about a young girl who herself is the setting of the film: what—and who—are her emotions and how do they impact her behavior from the inside out. Through never-before-seen development art, Docter and Rivera revealed that they not only explored what each emotion would look like—starting with basic shapes and colors—but also which emotions would be the stars of the show; for example, they considered including Pride and Hope.

“Growing up is hard.” -Pete Doctor

One surprise gleaned from this artwork: Sadness was originally going to be a male character named Bud. Artist Albert Lozano, played up the idea of having Sadness shaped like an upside-down teardrop, and the character really started to gel when he drew Sadness as his own mother. 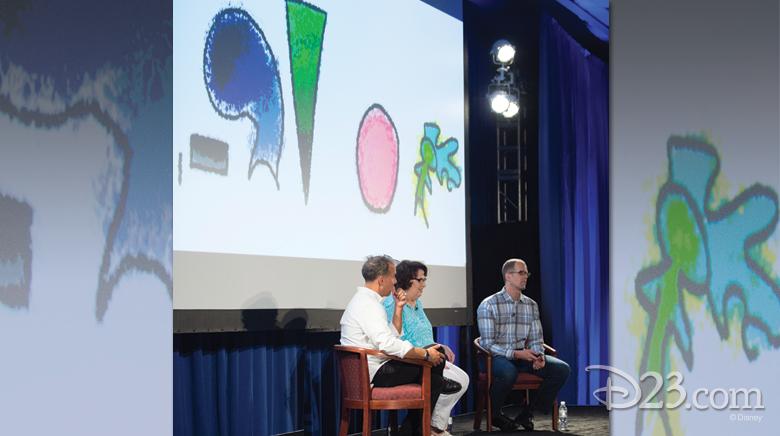 The casting of Phyllis Smith as the vocal embodiment of the blue-hued emotion was a huge breakthrough in the character’s development. Her comedic vocal hesitancy gave the creators a new insight into the character, who before this stage had constantly cried in an annoyingly one-note fashion. When the filmmakers said that, inspired by Phyllis’s voice, they added insecurity to the character’s personality, the actress cracked “That’s me! You nailed it!” In sharing with the audience the story of being contacted by the Pixar artists to come in and discuss the role, Smith recalled her reaction to seeing the storyboards as presented by Docter: “I felt like I had walked into Geniusland.” To the delight of D23 EXPO guests, the trio recreated a recording session of an actual scene from the film on the spot, with Smith voicing Sadness at the stand, Rivera reading the other roles, and Docter directing. When the director advised the actress to “try it again with a little less energy,” Smith asked, “Are you firing me?” in her saddest Sadness voice, earning her a huge laugh from the audience and a big hug from Docter. 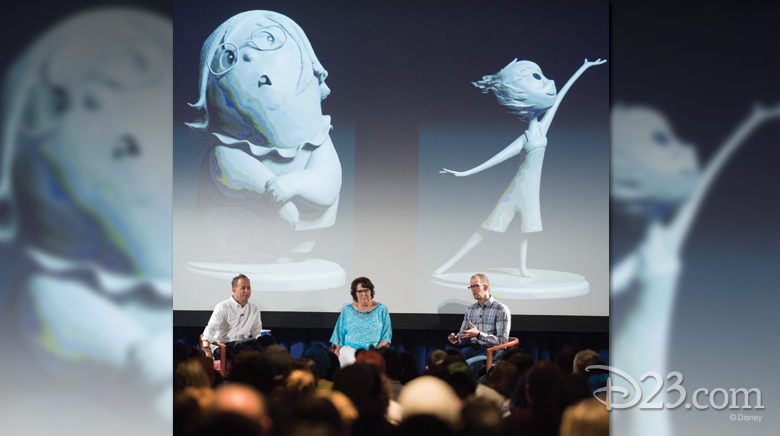 In personifying basic emotions for this extraordinarily creative film, Rivera said, “We were hoping that these characters would be our Seven Dwarfs, that forever after Sadness will be defined as looking and sounding the way we portrayed her.” Judging by the delighted reactions of the D23 EXPO guests, these endearing characters have indeed been embraced. This inside (and out) look at the behind-the-scenes creative process as presented by Docter, Rivera, and Smith was met with Joy. Only when the presentation was over was there Sadness.