Today at D23 Expo presented by Visa®, Disney Parks, Experiences and Products Chairman Josh D’Amaro shared a dazzling look into the future for Disney theme parks and beyond with an enthusiastic audience of fans. Highlights included the expansion of Avengers Campus at Disneyland Resort with a third attraction; a first look at the Disney Treasure, the next ship joining the Disney Cruise Line fleet; a closer look at Frozen-themed lands coming to three park destinations around the world; and a behind-the-scenes look at the blue-sky brainstorming of Walt Disney Imagineers.

“There’s no limits to where we are going,” D’Amaro said. “When I look back over our first 100 years, what jumps out at me is how we are just constantly reinventing ourselves, telling new stories for brand-new generations. You all know this: We need those stories more than ever. And that’s a lesson we take straight from Walt. He believed in the power of storytelling.”

Of course, a presentation devoted to what’s next for Disney would not be complete without a few magical surprises, which included appearances from special guests, celebrities, never-before-seen characters coming soon to Disney Parks, and spirited performances that filled Hall D23 with music and excitement.

Singer-songwriter Jordan Fisher kicked off the show with a rousing performance of the popular Walt Disney World Resort anthem “Happily Ever After.” Then, D’Amaro began sharing all the exciting updates focused, fittingly, on Disneyland Resort, the park that started it all.

Read on for more on all the magic to come in 2023 and beyond: 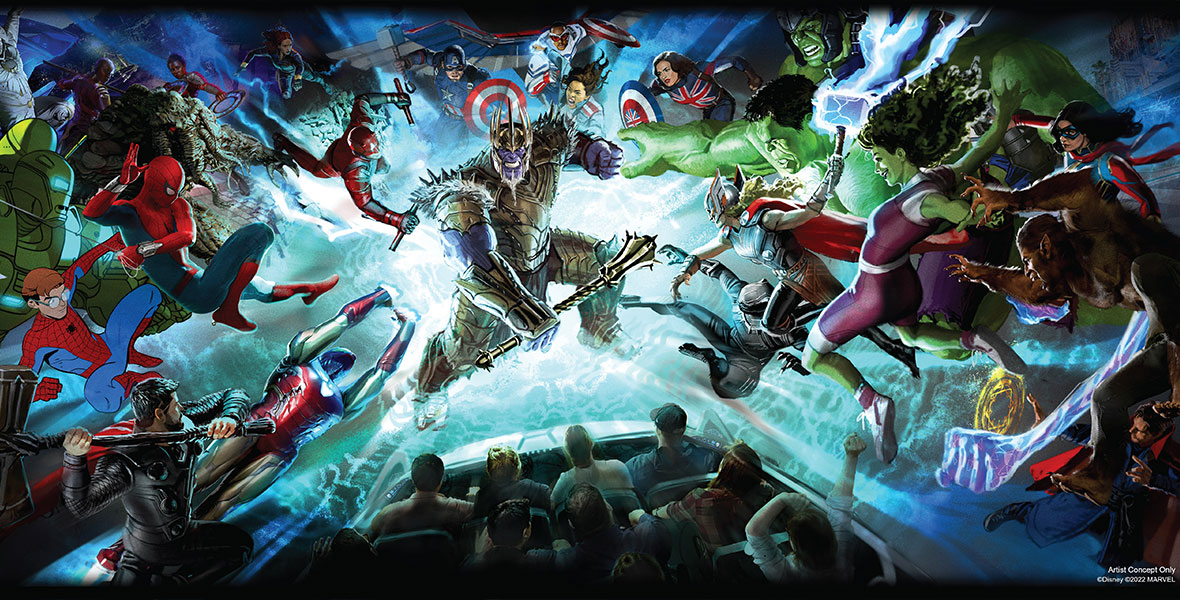 New Stories Coming to Disneyland Resort
D’Amaro was joined on stage by executive producer and Disney Legend Jon Favreau, who shared a first look at the Mandalorian and Grogu, two new characters whom guests will encounter at Star Wars: Galaxy’s Edge at Disneyland Park in Anaheim, California, starting in mid-November.

Then, Marvel Studios President Kevin Feige shared how Avengers Campus at Disney California Adventure park will expand the multiverse with a never-before-seen third attraction, along with the debut of the Incredible Hulk, who will appear in his Quantum Suit at Avengers Campus in California beginning next week for a limited time. The new attraction will allow guests to join in battle with the Avengers means facing foes from anywhere and everywhen, including a new threat, King Thanos, a Multiverse variant designed specifically for Avengers Campus.

“The fun thing about Marvel is [seeing] the characters all of the characters, all of the time—and with the Multiverse at Avengers Campus, you’re going to be able to do that,” Feige shared, before showing a rendering King Thanos, drawing gasps among the crowd. “This is a new version of Thanos for the very first time coming into the MCU via this attraction. He’s got a cool white beard, too, and a crown. This is a Thanos that won, and the Avengers aren’t too happy about that. And you have to help them.”

Just around the corner from Avengers Campus, Pacific Wharf will be reimagined as San Fransokyo from the Oscar®-winning Disney Animation film Big Hero 6, complete with a place to meet Baymax, as well as new spots to eat and shop.

Meanwhile, over at Disneyland Park, Mickey & Minnie’s Runaway Railway will invite guests into a cartoon world where toon rules apply, and Mickey’s Toontown will step into a new era of inclusive experiences for families of all ages when it opens in early 2023.

“We are going to celebrate Mickey, Minnie, and their best pals in a whole new way in Toon Town at Disneyland Park,” D’Amaro said before sharing concept art with the audience.

D’Amaro also said progress continued on the reimagining of the Paradise Pier Hotel to Pixar Place Hotel, where guests will feel as though they’ve stepped into a Pixar art gallery featuring new interpretations of favorite Pixar pals. Over at the Downtown Disney District, more than a dozen new and reimagined locations will open, including a Southern Californian favorite, Porto’s Bakery & Café. For running fans, runDisney races will return to the resort in 2024 for the first time since 2017. 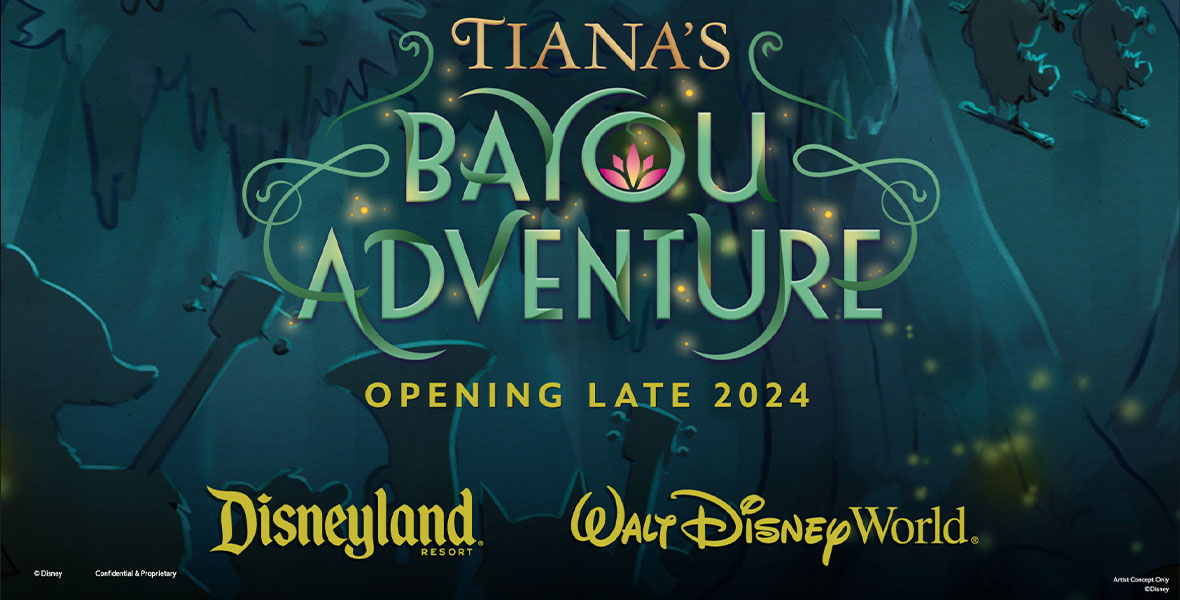 Closing out the segment, Tony Award® winner Rose, who voiced Tiana in Walt Disney Animation Studios’ The Princess and The Frog, delighted the audience with a rousing performance of “Almost There” from the film, followed by “Dig a Little Deeper.”

Walt Disney World Resort and the Transformation of EPCOT
The next major milestone in EPCOT’s multi-year transformation will include the completion of the World Celebration neighborhood in late 2023. Journey of Water, Inspired by Moana will also open in late 2023, inviting guests to follow the story of water on the planet, inspired by Moana’s connection to the ocean. Fan-favorite character Figment will also appear live to park guests by the end of 2023.

Over at Magic Kingdom, TRON / Lightcycle Run will invite guests to enter the Grid in spring 2023. Popular anthem “Happily Ever After” will play again when an updated nighttime spectacular returns to light up the skies over Cinderella Castle in 2023. At the Haunted Mansion, the Hatbox Ghost will materialize in 2023. 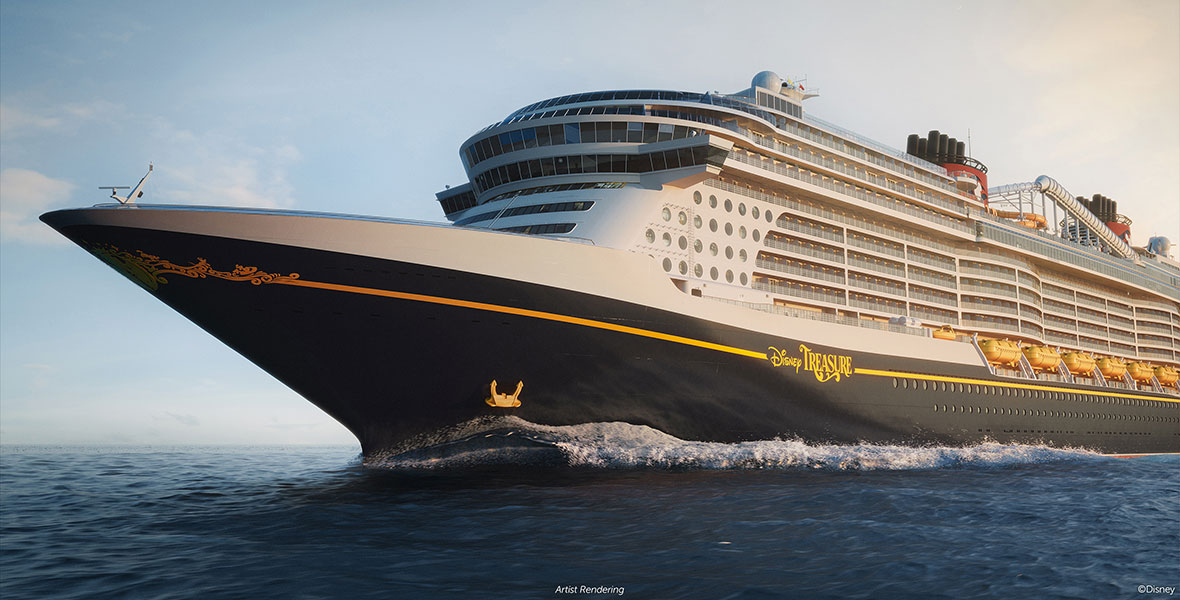 New Horizons for Disney Cruise Line and the Disney Treasure
The sixth ship in the Disney Cruise Line fleet, the Disney Treasure, will set sail in 2024. Imagineers have dreamed up a new design concept inspired by the theme of adventure, celebrating Walt Disney’s lifelong love of exploration. The Grand Hall—the magnificent three-deck-tall atrium that welcomes guests on board—is inspired by the grandeur and mystery of a gilded palace, drawing on real-world influences from Asia and Africa and paying homage to the far-off land of Agrabah. At the center, the signature statue will feature Aladdin, Jasmine, and their Magic Carpet.

For the first time, Disney Cruise Line will bring the magic of a Disney vacation to families and fans in Australia and New Zealand during limited-time cruises that immerse guests in Disney, Pixar, Marvel, and Star Warsstories beginning in late October 2023. Additionally, repositioning cruises for the Disney Wonder will be the first South Pacific voyages for Disney Cruise Line, giving guests the chance to experience destinations like Fiji and Samoa.

In the Bahamas, progress continues on a beautiful new island destination at Lighthouse Point, which will bring the natural beauty and rich culture of the Bahamas to life for Disney Cruise Line guests and be powered 90 percent through solar energy. 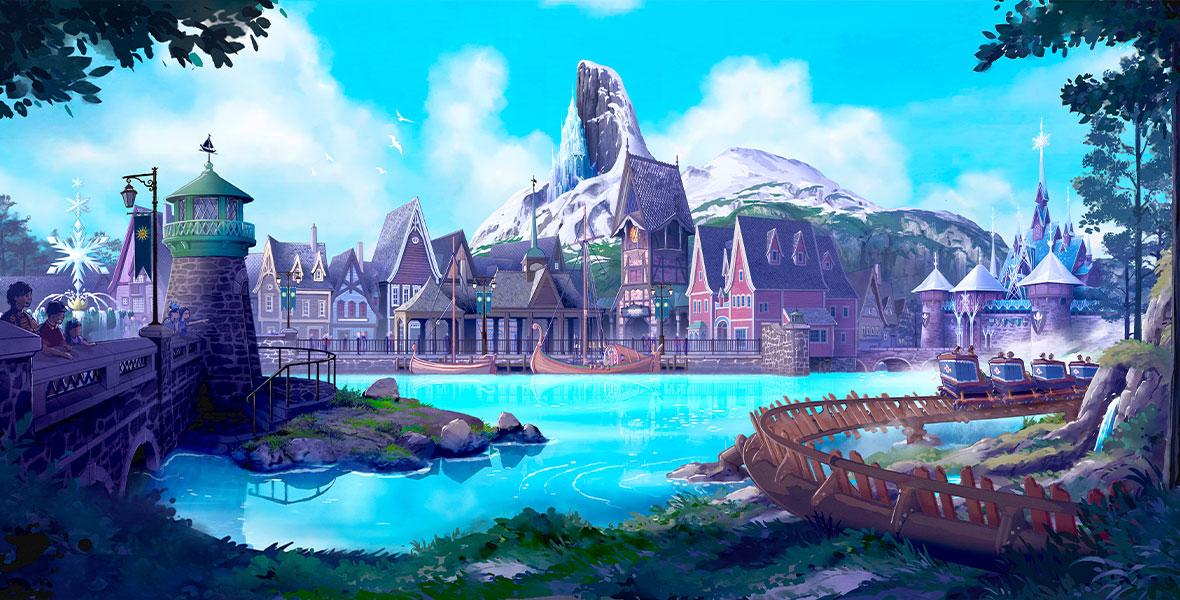 Three Frozen-Themed Lands Highlight Expansions at Disney Parks Around the World
Inspired by Disney Animation’s stunning films, World of Frozen will open in the second half of 2023 at Hong Kong Disneyland—the first of three Frozen-themed areas coming to international Disney parks. It will blend Arendelle with the park’s natural landscapes on Lantau Island.

At Disneyland Paris, the Frozen-themed land will be the next major milestone in the ongoing transformation of Walt Disney Studios park. This land will offer a gorgeous lakeside promenade and will immerse guests in the same magical wintry setting from the films. A new Tangled-themed family attraction will join the new gardens leading into the land. Frozen will also be part of the transformation of the Disneyland Hotel, reopening in 2024. As part of the grand finale of the 30th Anniversary celebration underway, a new stage show, “Pixar: We Belong Together,” will debut in 2023 in Walt Disney Studios park.

At Tokyo Disney Resort, Frozen is one of the stories coming to life as part of the Fantasy Springs expansion at Tokyo DisneySea, joining two other Disney Animation stories, Peter Pan and Tangled, plus a brand-new hotel integrated right into the park. Fantasy Springs will feature several new Audio-Animatronics® figures, including Elsa, who sings in Japanese and whose movements sync with the rhythms of the language.

A trio of singers took turns singing a rendition of “Into the Unknown” from Frozen 2, in Cantonese, Japanese, and French—representing the park locations which will feature the new themed land.

D’Amaro then shared a first look at the stunning transformation of Space Mountain at Tokyo Disneyland, showcasing how the attraction will transition from day to night. “With a nod to the original architecture, this reimagined Space Mountain will anchor a new plaza and will be completed by 2027,” he said. 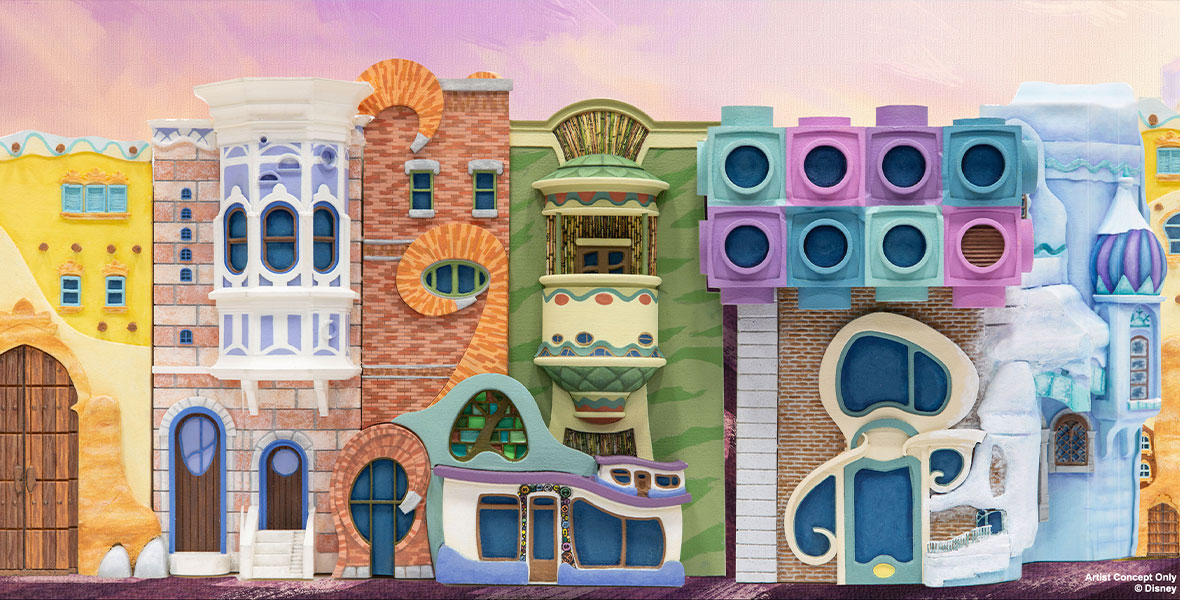 Shanghai Disney Resort will be the first Disney resort to bring the world of the Oscar-winning Disney Animation film Zootopia to life. At Zootopia Central Station, guests will find animals going about their daily lives. At the Zootopia Police Department, which doubles as the entrance for the land’s new family attraction, guests will be greeted by an Audio-Animatronics figure of fan-favorite Officer Clawhauser. 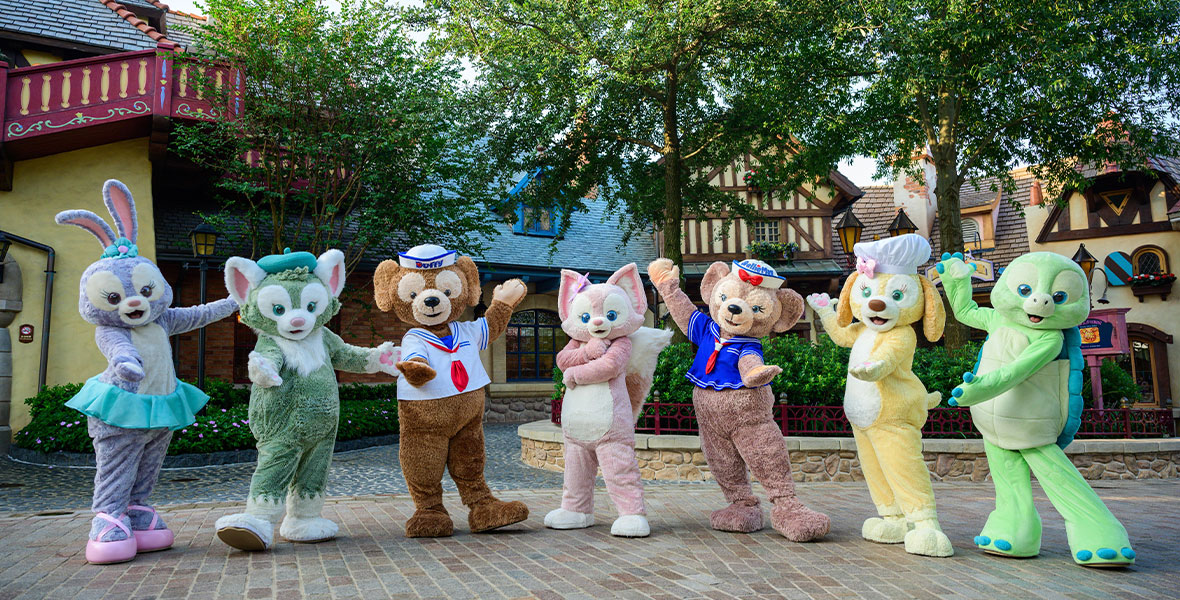 Mickey’s favorite teddy bear, Duffy, is a fan favorite in all three Disney resorts in Asia, and to the delight of assembled fans, D’Amaro shared that Duffy & Friends will star in their very own six-episode, stop-motion animated series on Disney+ next year.

What’s Next
A highlight of the morning included a look at what’s possible when Walt Disney Imagineers and their collaborators dream big. Disney Animation Chief Creative Officer Jennifer Lee, the Academy Award-winning writer and director of Frozen and Frozen 2, shared how the studio is working with Walt Disney Imagineering on concept explorations for Dinoland U.S.A. at Disney’s Animal Kingdom park and potential expansion opportunities at Magic Kingdom park, both at Walt Disney World.

Chris Beatty, Creative Portfolio Executive for WDI, offered a glimpse of what could lie “beyond Big Thunder Mountain” through concept art, citing two recent Disney Animation hits, as well as “what if” renderings of a land of Disney Villains. “Imagine what if we could pass over those fires in Big Thunder Mountain,” Beatty said. “Maybe there’s a little valley in front of us with the little town of Santa Cecilia [from Coco] and celebrating Encanto. And what if we could... fly into the Land of the Dead with our friend Miguel, just like the Riveras [from Coco]?  That’s what could be out there.” 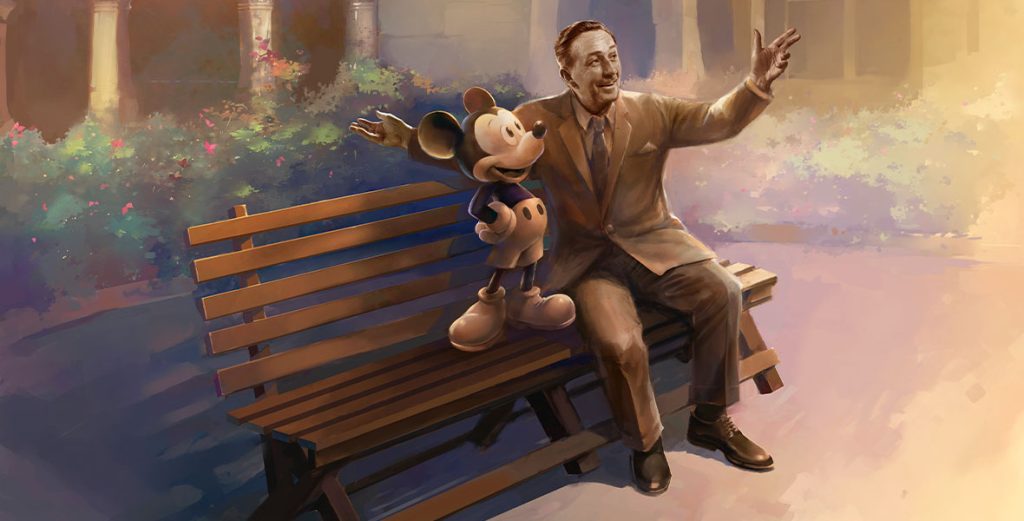 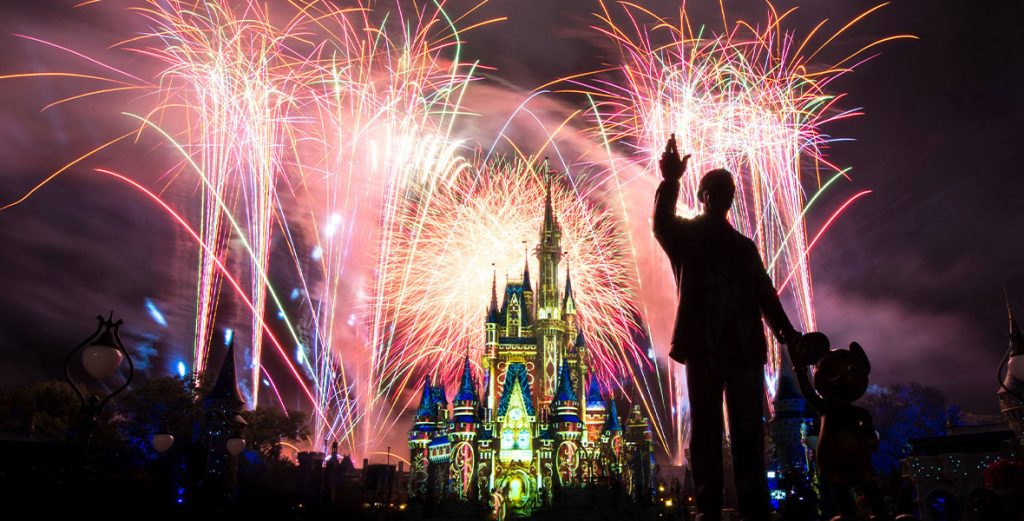 Disney 100 Years of Wonder
D’Amaro concluded the presentation with a first look at how Disney Parks, Experiences and Products will mark Disney 100 Years of Wonder (Disney100), the biggest celebration in the history of the Company. New décor, specialty food and beverages, character experiences, and more will come to parks around the world, with the heart of the celebration rooted at Disneyland Resort.