The Walt Disney Archives invited D23 Expo 2022 guests to step through a Disney100 portal to become immersed in a century of Disney wonder. A central timeline guided visitors through the chronological celebration, showcasing the vast breadth of extraordinary Disney events from the past 100 years—beginning with the Company’s founding in 1923. The timeline became the gateway to nine themed environments which offered guests the chance to literally “Step in Time” and into famous scenes and memorable moments from beloved animated shorts, films, and movie premieres, as well as television productions and Disney Parks favorites. Rarely seen historical objects from the Walt Disney Archives collection were exhibited like never before, displayed in re-creations of the remarkable settings from which they originated. 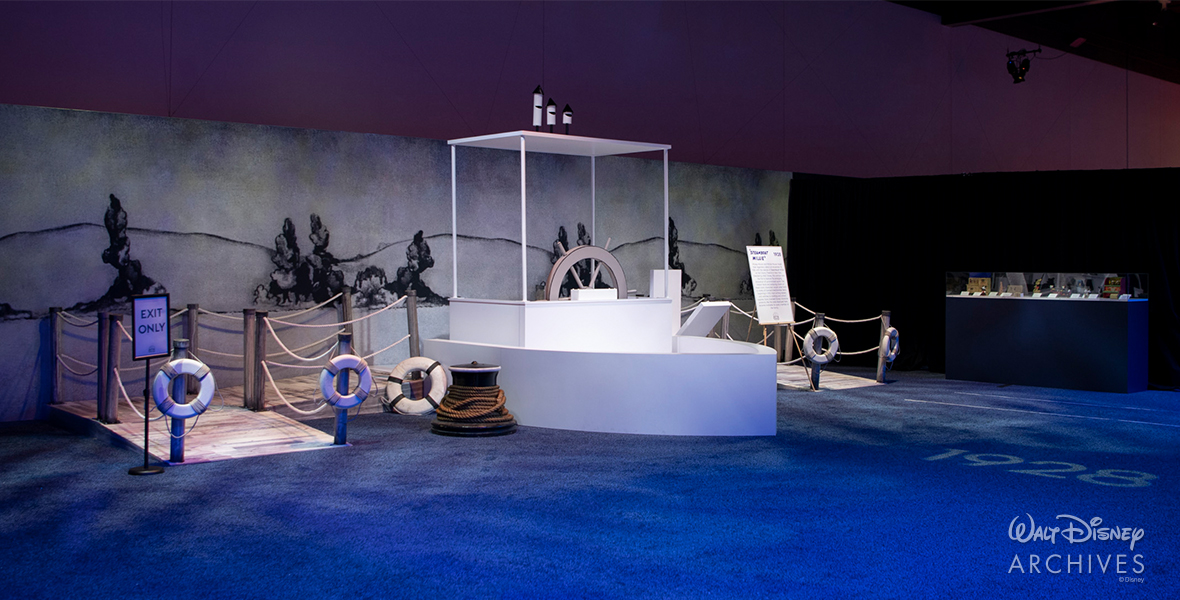 Steamboat Willie premieres – 1928
Mickey Mouse and Minnie Mouse made their legendary big-screen debut on November 18, 1928, with the release of Steamboat Willie at the Colony Theatre in New York City. Directed by Walt Disney, this cartoon was the first to feature the emerging innovation of synchronized sound. The instant fame and enduring charm of these iconic characters would also usher in a variety of licensed merchandise items beginning in 1930, from writing tablets and watches to clothing and school supplies. Soon, licensed Disney character products became available for every member of the family. 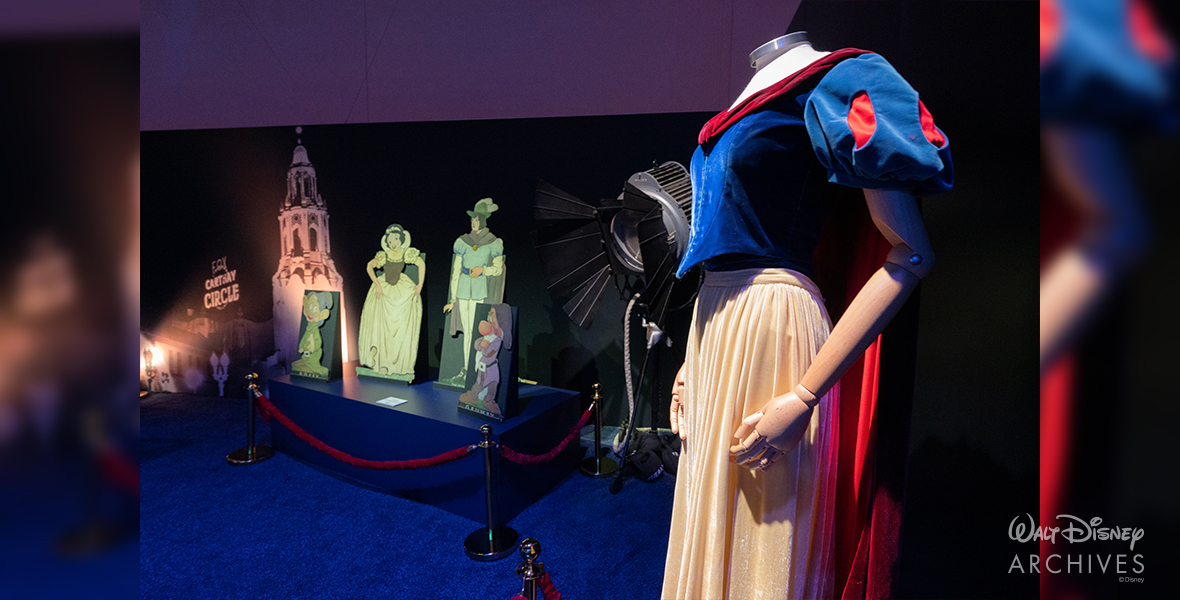 Snow White and the Seven Dwarfs premieres – 1937
Walt Disney’s first animated feature film, Snow White and the Seven Dwarfs, premiered at the Carthay Circle Theatre in Los Angeles, California, on December 21, 1937. This creative watershed for the Company was met with lavish fanfare as Hollywood’s biggest stars walked the blue carpet alongside the likes of Mickey Mouse, Minnie Mouse, Donald Duck, and Snow White herself. The promotional standees seen here hearken to an early European theatrical release and reflect the film’s worldwide popularity. And as a testament to Snow White’s timeless appeal, the featured costume—designed by Martin Izquierdo for actor Rachel Weisz—was featured some 70 years after the film’s original release as part of the Disney Dream Portrait series by photographer Annie Leibovitz. 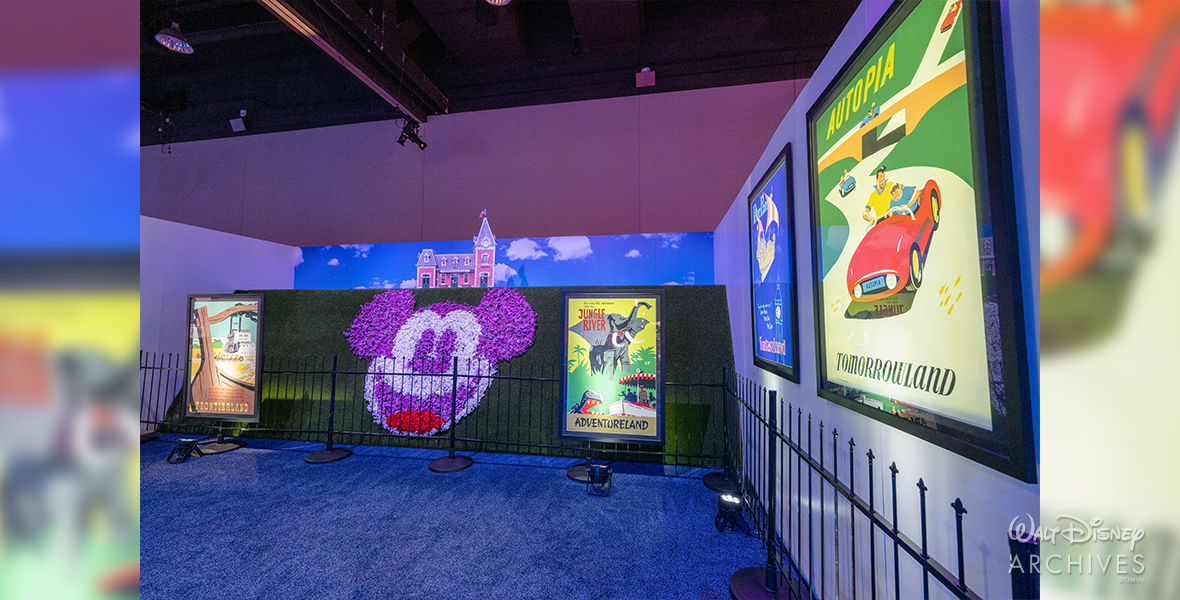 Disneyland opens – 1955
Disneyland, Walt’s brand-new concept in family entertainment, opened to an invitational audience on July 17, 1955, and to an eager public the following day. Constructed on a site originally spanning some 160 acres, Disneyland has continued to grow and evolve over the years. The well-known attraction posters that now populate the tunnels of the Main Street Station originally greeted visitors at the park’s main entrance, in front of and near the famous floral depiction of Mickey Mouse. These whimsical posters were introduced within the first year of the park’s operation to provide guests with a taste of what they would see inside the park and in which themed land they could experience it. The posters displayed were all original to Disneyland—each screen-printed by hand and representing such opening day attractions as the Santa Fe and Disneyland Railroad, Peter Pan’s Flight, Jungle Cruise, Autopia, and Mark Twain Riverboat. 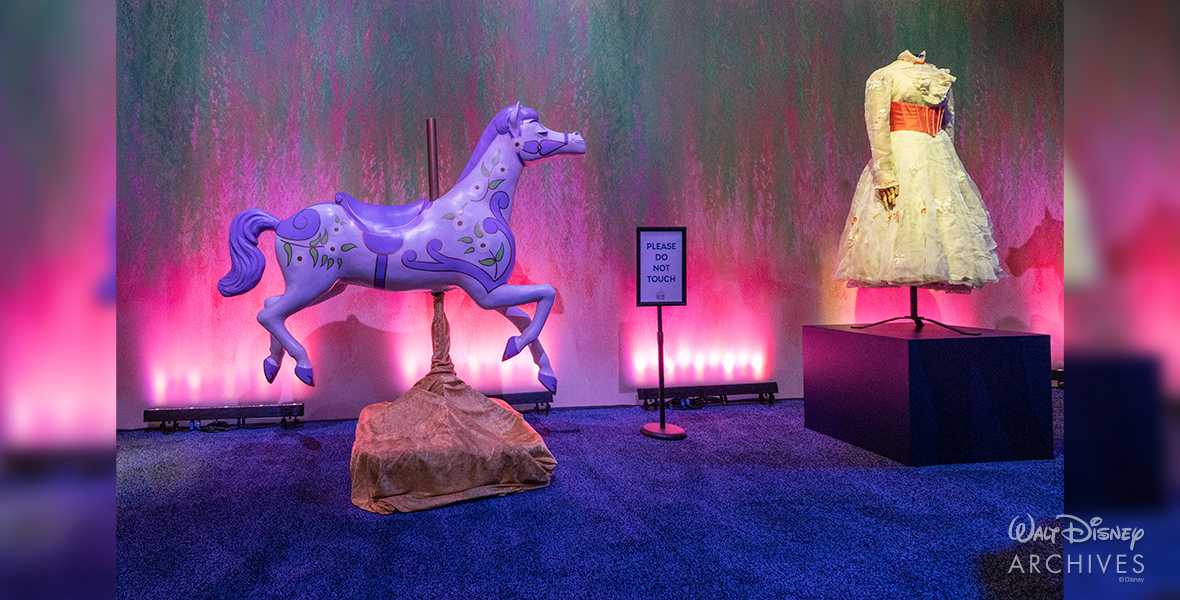 Mary Poppins premieres – 1964
Grauman’s Chinese Theatre was the site of a “Jolly Holiday” when Mary Poppins made its world premiere at the famed Hollywood movie palace on August 27, 1964. Heralded as one of Walt Disney’s crowning achievements, the musical fantasy was shot entirely on soundstages at The Walt Disney Studios in Burbank, California. As Walt once explained, the film employed “about every trick we had learned in the making of films,” although bringing its chalk-illustrated world to life was no easy feat for Disney’s studio artists. Similar to today’s green-screen technology, an innovative sodium vapor process was developed to combine live-action and animation for the acclaimed “Jolly Holiday” sequence; actors were filmed in front of a screen, which was illuminated from behind with sodium vapor lights, casting a yellow hue. A prism inside the camera then filtered out the sodium light, leaving only the main image, to give filmmakers and animators the ability to later fill in the surroundings with fanciful creations. Add in extraordinary props (like these intricate carousel horses) and costumes (like this creation designed by Tony Walton and worn by Disney Legend Julie Andrews), and no wonder that it’s Mary that we love! 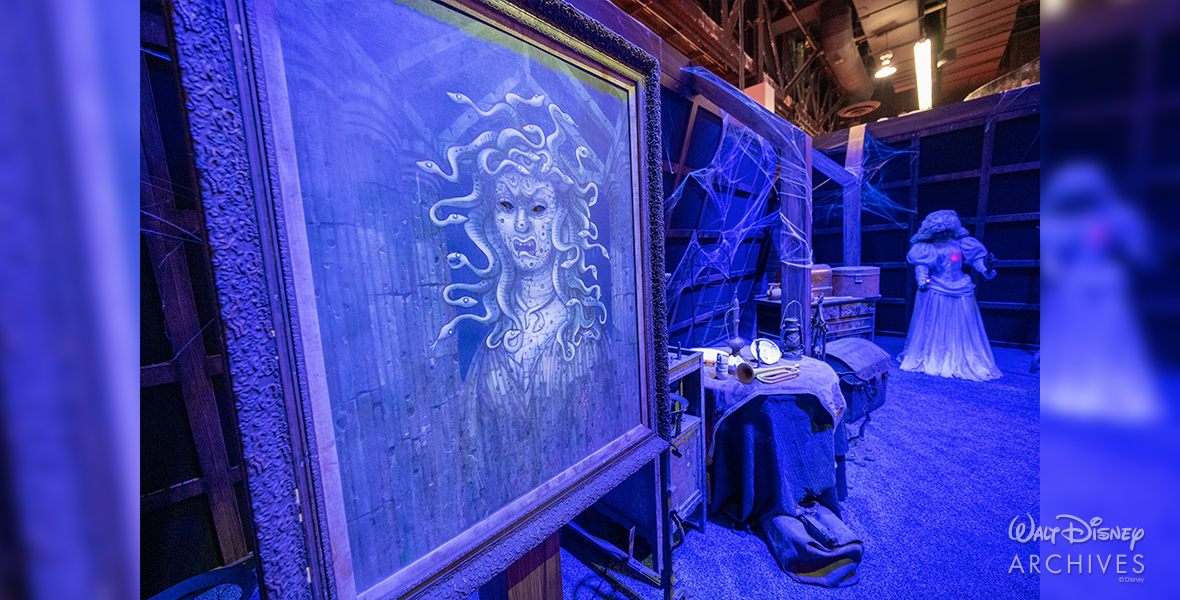 Walt Disney World Resort opens – 1971
In the early 1960s, thanks to the popularity of Disneyland, Walt and Roy O. Disney began searching for a site on the East Coast where they could build an entirely new “vacation kingdom” of Disney entertainment and recreation. To attract guests from new regions, Central Florida was ultimately selected as the ideal site for the project known today as Walt Disney World. The 43-square-mile resort complex opened October 1, 1971, and originally featured Magic Kingdom Park and two surrounding resort hotels—the Contemporary and Polynesian Village Resorts. Unique to the Magic Kingdom was a new themed land called Liberty Square, which debuted with an updated version of the signature Disneyland attraction, the Haunted Mansion. Since the mansion’s doors first creaked open a half-century ago, foolish mortals have toured the happy haunting grounds of 999 spirited specters by Doom Buggy—discovering new and reimagined ghoulish delights as they have materialized over time. Presented here are historical items and apparitions that once called the Haunted Mansion home, including the ghostly bride who departed the mansion’s Attic in 2007. 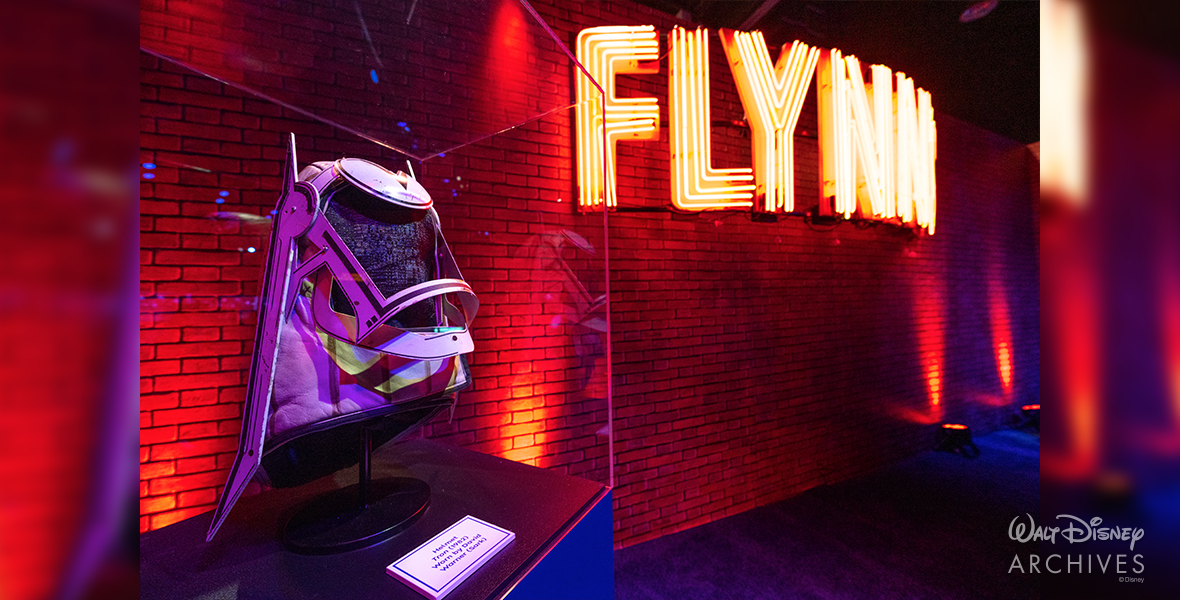 TRON is released – 1982
Greetings, Programs, and welcome to The Grid! The cult classic film Tron was released on July 9, 1982, sending audiences on a futuristic adventure through the electronic world. This groundbreaking motion picture was the first to make extensive use of computer-generated imagery, requiring gigabytes of expertise and creativity. Inspired by director Steven Lisberger’s passion for computer games, it was only natural that the film’s “real-world” sequences featured an arcade. The impressive neon sign for Flynn’s Arcade, seen here, served as the beacon for the video game facility managed by Kevin Flynn (played by Jeff Bridges) in the film. Whether you prefer playing Lightcycleor Space Paranoids, Flynn’s was the most happening place to be (and remember—to get that high score, it’s all in the wrist). 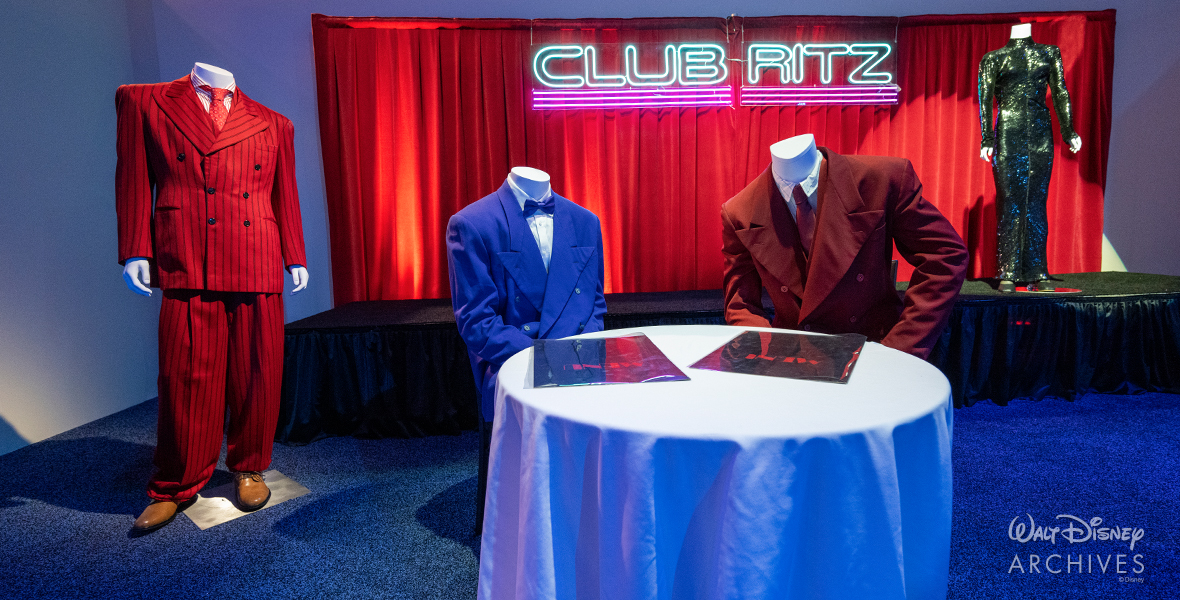 Dick Tracy is released – 1990
“Calling Dick Tracy. Calling Dick Tracy.” Disney’s take on the iconic fedora-clad detective first hit the big screen on June 15, 1990. In this Touchstone release, the colorful world of Dick Tracy was made to resemble the vibrant style of the namesake comic strips originally created by Chester Gould in 1931. Italian costume designer Milena Canonero assigned each character—from starring to background roles—a distinct color to help them stand out, forming a palette from black to white without any mid-tones or muddy colors. In the film’s Club Ritz raid scene, Breathless Mahoney (played by Madonna) wore this backless, black sequined dress as she performed the Academy Award®-winning number “Sooner or Later [I Always Get My Man]” by Stephen Sondheim. Crime boss Big Boy Caprice (played by Al Pacino) donned the flashy red double-breasted suit with black pinstripes. For Warren Beatty’s Dick Tracy costume, the look was lifted straight off the page: the trademark ensemble of black suit, white shirt, red striped tie, yellow coat, and fedora. 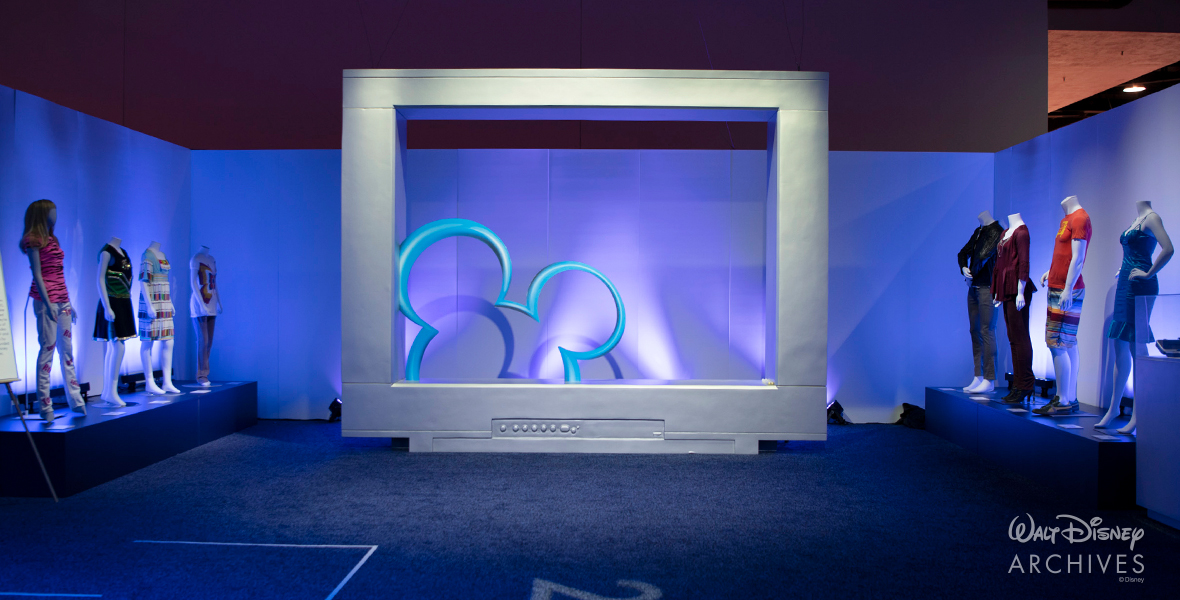 First “Wand ID” airs on Disney Channel – 2003
Some of Disney’s most popular stars first delivered the iconic catchphrase, “... and you’re watching Disney Channel,” when the first “Wand ID” segments aired on June 7, 2003—some 20 years after the cable network’s historic launch. Among the first talent to “wave the wand” were actors from Even Stevens (2000), That’s So Raven (2001), The Proud Family (2001), and Lizzie McGuire (2003). With the popularity of these filmed clips, over 350 have aired to date—and they’re still being created with the newest class of Disney Channel talent! Guests at D23 Expo 2022 were able step into a larger-than-life TV to create their own “Wand ID,” surrounded by costumes worn by stars of past Disney Channel original series and movies. 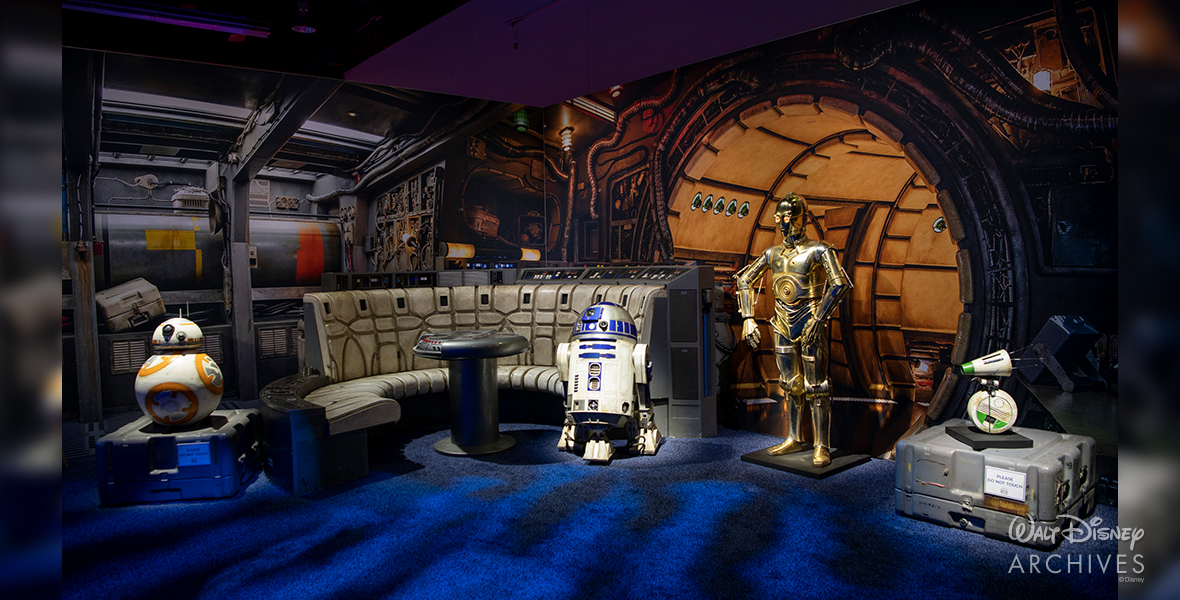 Acquisition of Lucasfilm – 2012
On December 21, 2012, The Walt Disney Company completed its acquisition of Lucasfilm Ltd. Included in the deal was the special effects powerhouse Industrial Light & Magic (ILM) and Skywalker Sound, along with the rights to the Star Wars and Indiana Jones franchises. In 2021, the Walt Disney Archives welcomed Star Wars film props, costumes, and other artifacts into the collection, beginning with historical pieces from Star Wars: The Force Awakens (2015). The collection now includes an array of droids, including the ones seen here (BB-8, C-3PO, D-O, and R2-D2), as well as elaborate interior components from the Millennium Falcon. 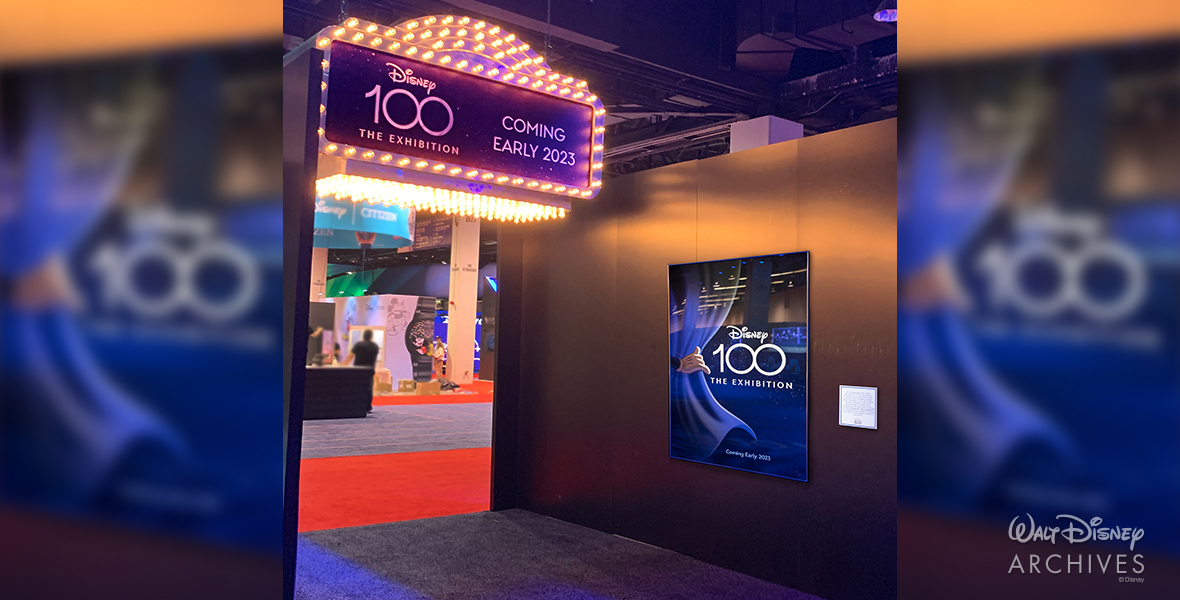 As we approach the 100th anniversary of The Walt Disney Company—and after such a successful and engaging showing at D23 Expo 2022—we at the Walt Disney Archives are incredibly excited about traveling our new and unique exhibit marking a century of unparalleled innovation and storytelling with the world. Coming in 2023, Disney100: The Exhibition will celebrate the wonder of Disney, from 1923 to the present and into the future.