Home / Headlines / Cutting a Rug with Us Again’s Filmmakers

Walt Disney Animation Studios’ first animated short in five years, Us Again is directed by Zach Parrish and tells a tuneful tale set in a city pulsating with rhythm. Art, an elderly man, and Dot, his young-at-heart wife, rekindle their youthful passion for life—and each other—on one magical night; the years fade away as the joy of dancing propels them across the vibrant cityscape of their youth and revives fond memories and ambitions.

Us Again is told entirely without dialogue, with choreography by award-winning choreographer/dancers Keone and Mari (World of Dance; collaborations with Justin Bieber and Billie Eilish) and an original funk/soul musical score by Pinar Toprak (Captain Marvel). Recently, D23 had the chance to hear from a few of the filmmakers behind this delightfully heartwarming, toe-tapping new short—including the choreographers; producer Brad Simonsen (associate producer on Big Hero 6, Zootopia, and Ralph Breaks the Internet); and director Parrish (head of animation on Big Hero 6 and director of the Short Circuit film Puddles). The behind-the-scenes scoop is just as unique as the short itself…

Parrish on the origins of Us Again:
“When I was coming up with ideas, we actually pitched four different [ones] in the development process,” he explains. “But this idea in particular came from a time in my life when I was kind of struggling with the changes that go along with aging. I was bemoaning my aging body—I’m not a super old person, but I was starting to recognize those changes in myself. And it led me to these conversations that I would have with my mom, where she would always talk about all the great things that she was gonna do when she grew up. And it really made me stop and realize that I had my priorities wrong. I was looking in the wrong direction; if I’m always looking in the past, then I’m gonna miss the beauty in the now. I’m ‘old’ by my own definition, [but] she’s young by hers. And so that idea of youth being a state of mind really got my gears turning, and I thought it’d be fun to do a ‘fountain of youth’ story.”

Simonsen on making sure the music for the short was just right:
“As we started the process, Zach knew that the foundation of this had to be the music, along with the choreography,” he says. “Tom MacDougall, [formerly] head of music at Walt Disney Animation Studios [now President of Walt Disney Music], brought in Pinar Toprak, who did the score for Captain Marvel. What we didn’t know, at the time, was that although Pinar’s amazing at doing [orchestral] scores, she loves funk. The vision for this was always to have a funk and soul, ‘old and now’ kind of feeling—and she brought it. She was such an incredible collaborator. It’s wonderful.”

Parrish details what specifically drew him to working with Keone and Mari:
“As I was thinking of this idea for the film and knowing that I wanted to do the entire thing through dance, it sparked this memory of this video that I’d seen [online of] this incredible couple, Keone and Mari; I believe they were teaching at the time. It was to Bob Marley’s ‘Is This Love,’ and [they were] dancing as an old couple. It was perfect because as an animator, I’m very familiar with pose-to-pose animation—and their style of dance had this perfect ‘animation-ness’ to it. But they also have this incredible ability to tell stories with the way that they dance. All dance is storytelling, but theirs was so deep and so emotional—and the connection between them was so visceral—that it felt perfect for this film. And so, from the very beginning, even when I was pitching the idea of the short, I was actually using examples of Keone and Mari to say, ‘This is what I would love for it to look like, if somebody could do this [for us]’—never thinking that it would actually be Keone and Mari who would get to bring it to life.”

Mari on when they joined the process—and the very specific way Mari remembers:
“I believe we came in to the project around April of 2019,” Mari says, adding with a chuckle, “I remember because I think I was about six months pregnant! It’s really a dream, and still surreal that we got to work with Disney Animation. We’re both huge Disney fans; we’ve been since we were kids. I keep saying it, but I still am pinching myself. I can’t wait to be able for people to see it and enjoy it.”

Keone discusses their choreographic inspiration for the short:
“We’ve been dancing and choreographing for so long,” he explains, “and the one thing that we’re so passionate about is story. The [sense of] marriage to the project was just instantaneous—as soon as we heard what the ideas were. We’ve been trying to tell stories through dance our entire careers. And we find that that’s where Disney’s power in storytelling is—it’s with animation. Our power in storytelling is in our dance style. And you know, developing the characters and finding out how they would move and all of those things were so important to us; usually [there are] projects where they say, ‘Just choreograph to this set of music, and then give it to the artist,’ and that’s it. We usually don’t get to use the other half of what we love to do, which is tell stories. We can’t emphasis enough how amazing this project was.”

Parrish and Simonsen explain how marrying the animation with Keone and Mari’s choreography was a particularly unique—albeit surmountable—challenge:
“We had a ‘turducken’ kind of problem with this film,” Parrish admits, laughing. “Because we had to have the music in order to inspire the dance, we had to have the story to inspire the dance—but we needed the dance to inspire the story. And so it really came around like that. Brad was smart enough to reach out to Keone and Mari as early on in the process as [possible], because we met with them in April ’19—and at that point, we were pretty loose as far as what the story was. We really wanted them to be partners with us all along the way, as far as [us asking] where can we go and where can we not go? And their answer was pretty much, ‘You can go anywhere,’ because they’re incredible… [it was] amazing to have their level of partnership throughout the entire process.”

“Normally you wait and do the score at the end of the movie, and you have temporary music in,” continues Simonsen. “But we knew that we needed the actual score. So, Pinar was challenged to make the song for the movie without really ‘having’ the movie yet. She had a very rough pass of what was not the final short, and she was creating [off of] that. And then we were working to that music, and ultimately got that to Keone and Mari for choreography. We were sharing along the way to make sure we were all on the same path.”

On what the rain in the short symbolizes for Parrish:
“For me, growing up in the Midwest, rain is this very joyful thing,” he explains. “When I was a kid, playing in the rain—that’s where [my Short Circuit film] Puddles came from. It’s this very youthful activity—for me, anyway. I know it’s a little bit different for people here in Los Angeles… When thinking about water mechanisms as this ‘fountain of youth,’ the rain just felt like this perfect fit—in that it makes you feel like a kid again. And so using that to inspire the actual transition of the characters felt perfect. And it also felt really good to me to have [the rain] be this night of passion rediscovery for this couple who are just out there being kids together and getting to be themselves again. And that’s why the short is called Us Again. It’s kind of from multiple perspectives—it’s from Art’s perspective and from Dot’s perspective, in that there’s a physical ‘us again,’ but there’s also an emotional ‘us again’… it’s about emotionally being true to who you are and recognizing that world around you.”

Some Easter eggs viewers should keep an eye out for:
“‘Rhapsody in Blue’ from Fantasia 2000 is one of the big inspirations for Us Again,” says Parrish, “and it’s actually playing on a movie screen in the background during one of the montage shots. It goes by very quickly, but I wanted to have a tip of the hat to that film in there… I know there’s a few Easter eggs in the set dressing, in the apartment, from our other films. I’m pretty sure there’s a Tangled stein, that we got as a crew gift, that’s sitting on a shelf somewhere.”

Parrish describes what it felt like to be given the opportunity to direct Us Again:
“I cried the day that I got the opportunity,” he admits. “And I cried many, many times throughout this [process] just being blown away by the privilege of it. And the team that you get to work with, across the board—not just the amazing people here on the [call], but, there’s a hundred or so people that worked on this film and they’re all incredibly talented. To see all of those people working, and to ‘direct’ where they go—it’s amazing. And to be attached to a movie like Raya and the Last Dragon is crazy. I don’t know a better word to say because it’s just been overwhelming, for two years!”

On what the filmmakers hope audiences, ultimately, take away from the short:
“Love,” says Keone. “And [the idea of] being present with each other. The other day we were walking our dogs and there was this older couple in front of us, [wearing clothes that were] matching, I just thought, it’s that ‘#couplegoals’ feeling. And when you’re watching them walk across the street—Mari and I had a feeling of joy, that love and that warmth. I hope that people can take that away [from this film].” Mari concurs, adding, “I think great art stays with you after you perceive or experience it—it just follows you home, and it has a little bit of a thing that’s reminding you or telling you some kind of truth. And I hope that people feel that with Us Again.”

“I think that frankly, we often take our loved ones for granted,” Simonsen says. “That they’ll always be there with us. We’re living through a moment in time where that’s something that we shouldn’t take for granted. We really should love who we’re with, and tell them that and care for them and enjoy every moment that we have.”

And Parrish concludes by summarizing his hopes: “I said from the beginning, to my wife, that I hope when people watch this film, they look at their grandparents and realize that they were kids once, too. And that it inspires them to ask questions. Because that is something that I feel like I missed out on—because I wasn’t self-aware enough, I guess, to ask those questions while my grandparents were still around. So I hope that Us Again inspires conversations between generations, about their lived experiences and their views on life and their views on their relationships… hopefully people will think about their families differently.”

See Walt Disney Animation Studios’ Us Again when it debuts in front of Raya and the Last Dragon in U.S. theaters beginning March 5—and then on Disney+ in June! 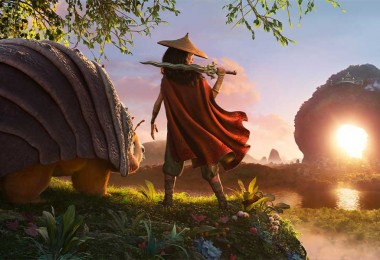 Meet the Characters of Raya and the Last Dragon