A few miles south of Orlando, Florida, exists a fairytale castle more striking and revered than perhaps all the fortresses and towers of Europe. A structure that pierces the bluest skies and stands out for miles around an endless horizon of the purest green nature. Its surface radiates the intense Florida sunshine during the day and sustains the majesty at night with an array of multicolor lights, exciting projections and powerful fireworks. This dream-like edifice is called Cinderella Castle, and it sits in the heart of Magic Kingdom Park at Walt Disney World Resort.

Construction on Walt Disney World formally began in May 1967, and Cinderella Castle was one of the first structures to be erected on the site. This iconic building, according to an early Walt Disney World press release, “…emerged as a romanticized composite of such royal pleasure courts as Fontainebleau, Versailles and a dozen famed chateaux of the Loire Valley. Among them are Chenonceau, Chambord, and Chaumont…. These and many others combined with original Disney designs prepared 20 years ago…for Cinderella [1950]….”

Unlike the structures built in the Middle Ages, Cinderella Castle was fortified with 276 tons of steel, and crafted out of contemporary building materials such as fiberglass and plastic. Disney artisans created, sculpted, and prefabricated many of the Castle’s features such as turrets, glass mosaics, gargoyles, and imitation stonework. Soaring almost 200 feet into the air, Cinderella Castle sits atop a network of utility corridors (or “utilidors,” for short) where an army of Disney employees and facilities stay hidden from the view of guests who traverse the Magic Kingdom daily.

In honor of Cinderella Castle and the 50th anniversary of Walt Disney World, here are a series of construction photos from the Walt Disney Archives Photo Library of one of the most iconic American landmarks and architectural achievements in the history of The Walt Disney Company. 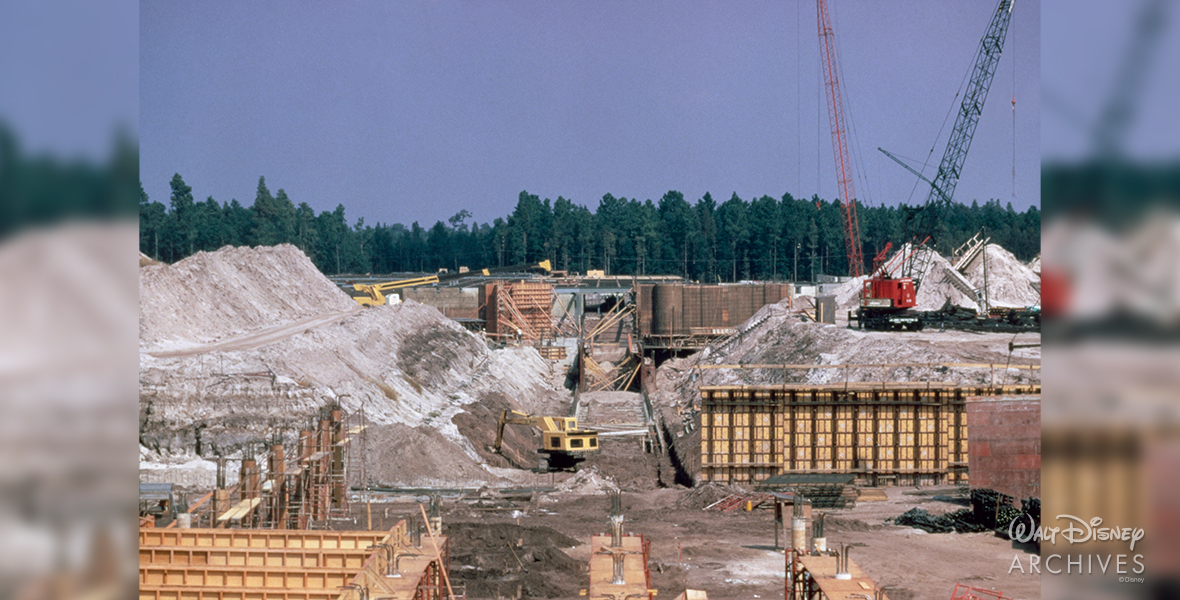 Looking north toward Fantasyland, this image captures both the Main Street, U.S.A. utilidor (foreground) and the Fantasyland utilidor and Cinderella Castle foundation (background). The large opening in the steel is where the utilidor will pass beneath the Castle, which will be built overhead on the park’s second level. This system of passageways was designed with an emphasis on keeping backstage elements of the Magic Kingdom hidden from view of guests as not to disturb the carefully crafted environments of each land. Things such as trash removal, cafeterias, breakrooms, storage, office space, and utilities work are just some of the activities and allotted uses of the utilidors that exist just below the surface of the park. 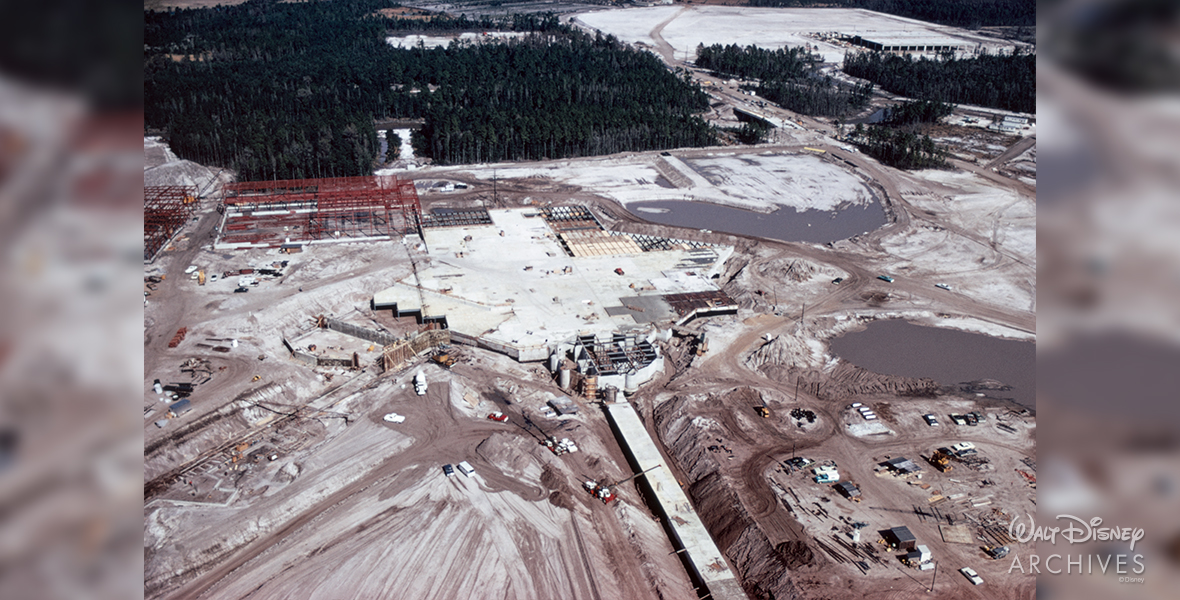 This aerial view looking north shows the massive size of the Fantasyland utilidor that sits between Cinderella Castle and the back of the park. Behind the Castle foundations you can see the utilidor has been covered with what will become the second level of Magic Kingdom. The large, red steel at the top left corner is the building that will eventually house “it’s a small world,” and the body of water across from it is the beginnings of the foundation for 20,000 Leagues Under the Sea. Also, notice that the utilidor passageway to Main Street, U.S.A. has been enclosed. 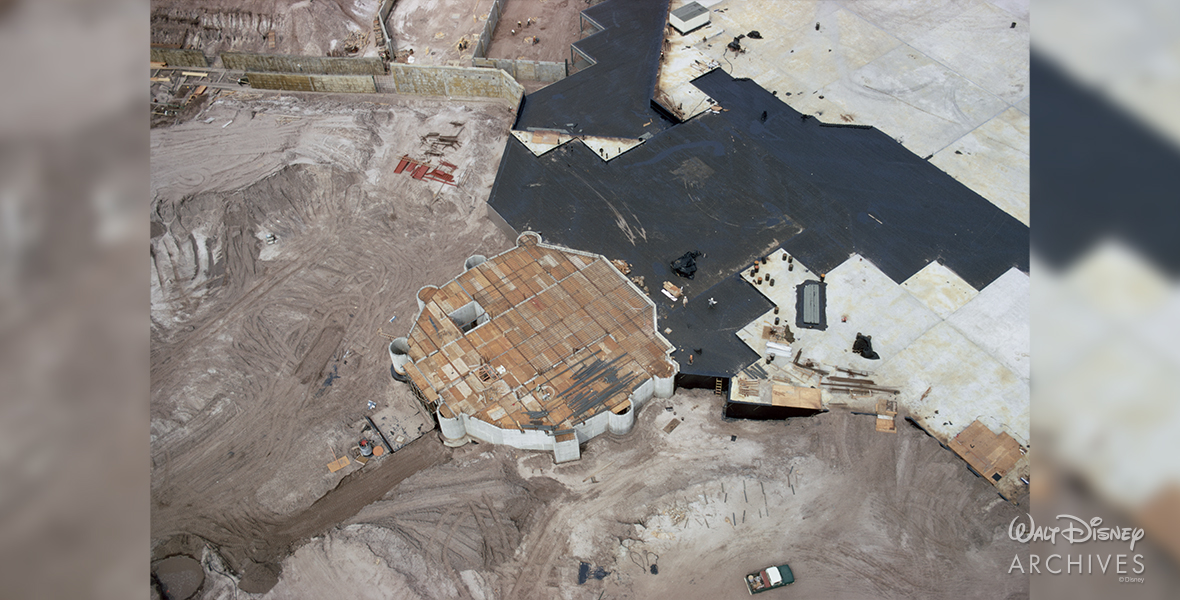 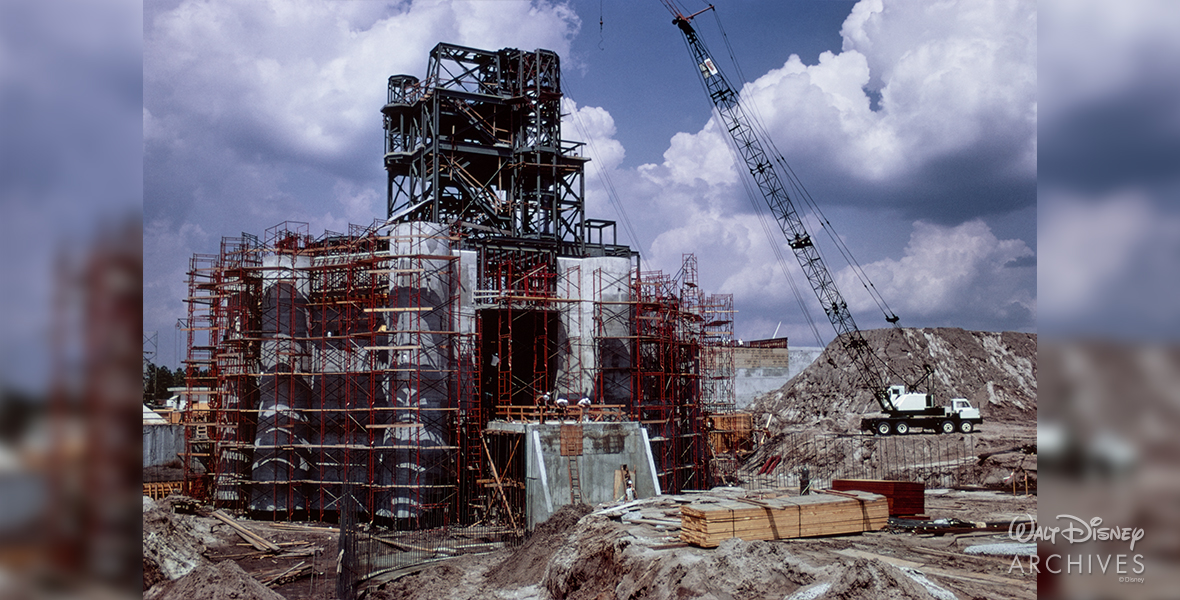 Scaffolding continues to rise in this shot looking northeast toward the front of Cinderella Castle. 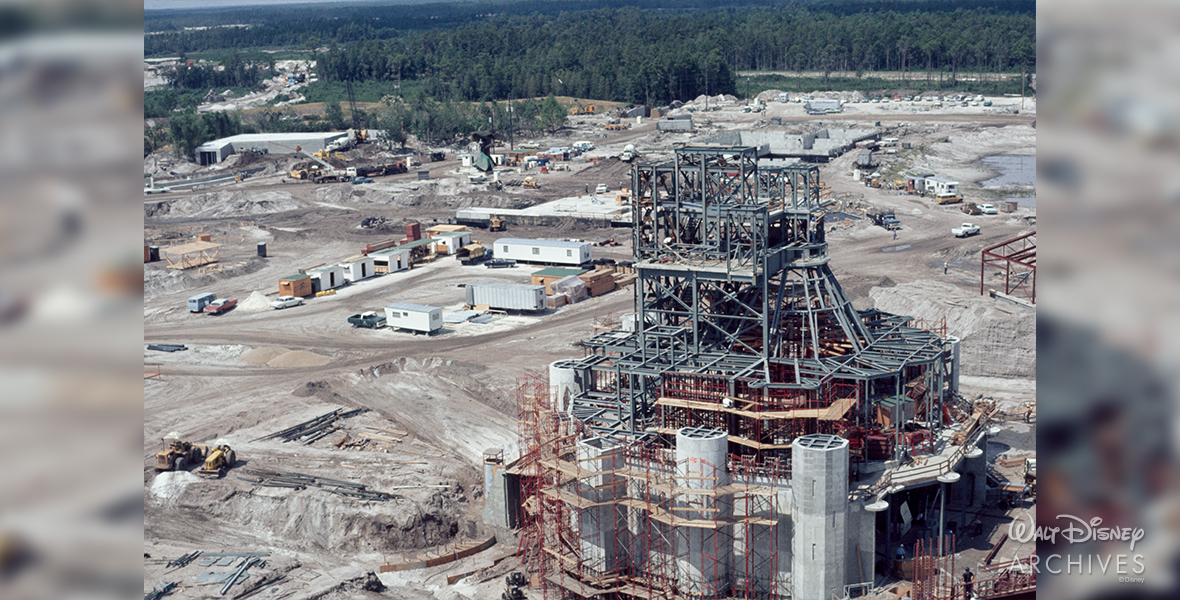 An aerial view looking at the east facing side of Cinderella Castle. The area just beyond is where Adventureland, Frontierland, and Liberty Square will be built. 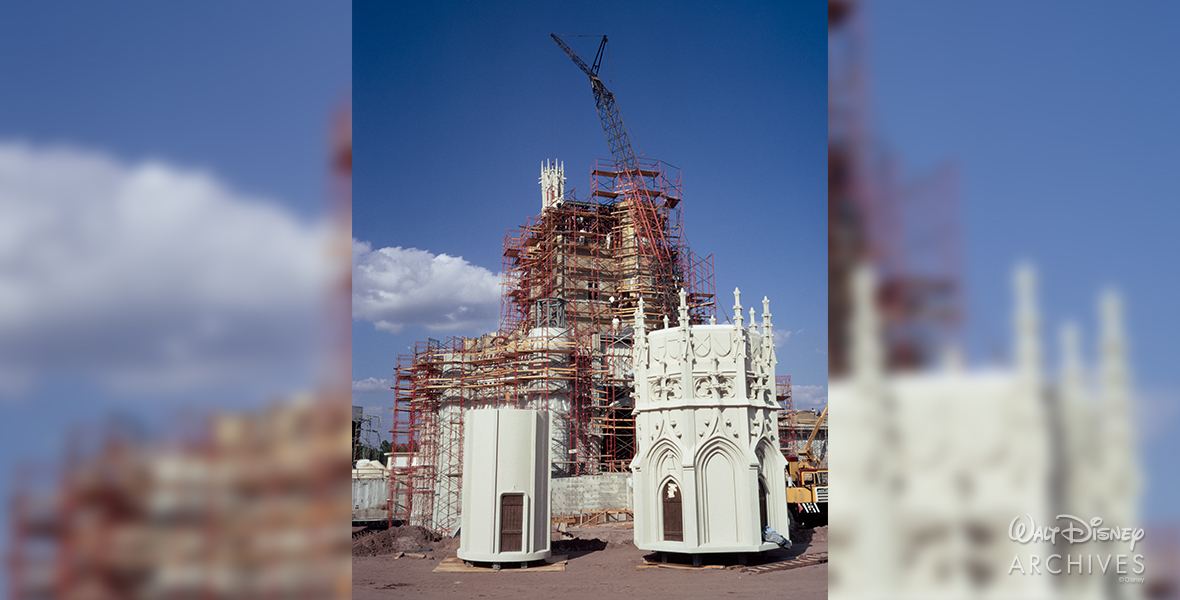 Many of the ornamental pieces of Cinderella Castle were prefabricated offsite and then delivered to the construction site and lifted into place by cranes. 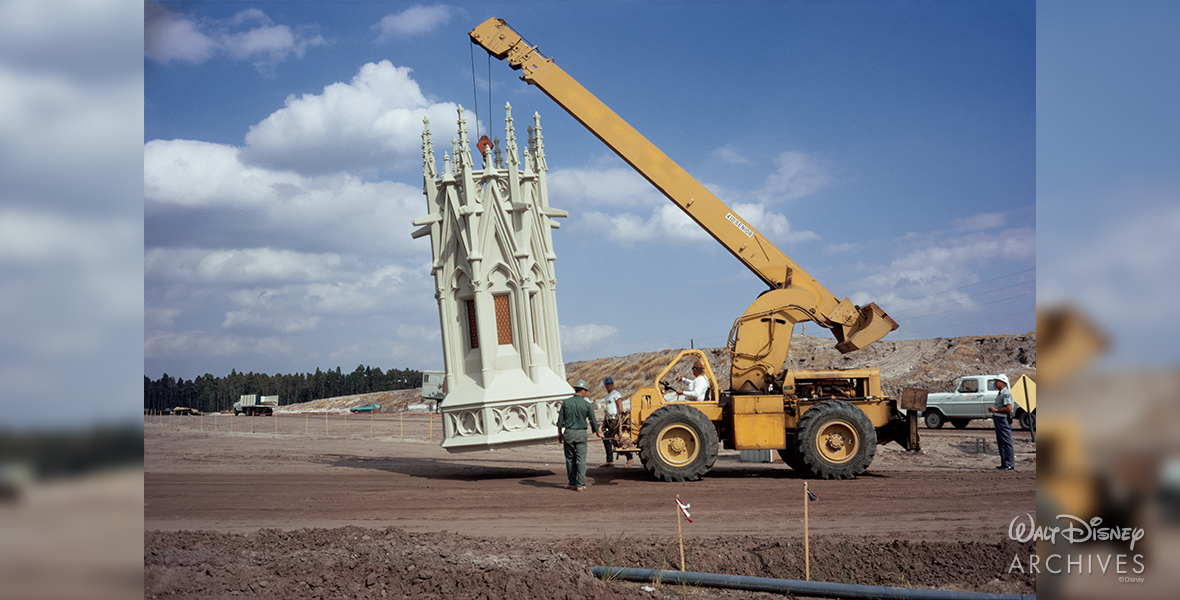 A construction crew trucks an ornamental section of a Castle tower across the Magic Kingdom site. 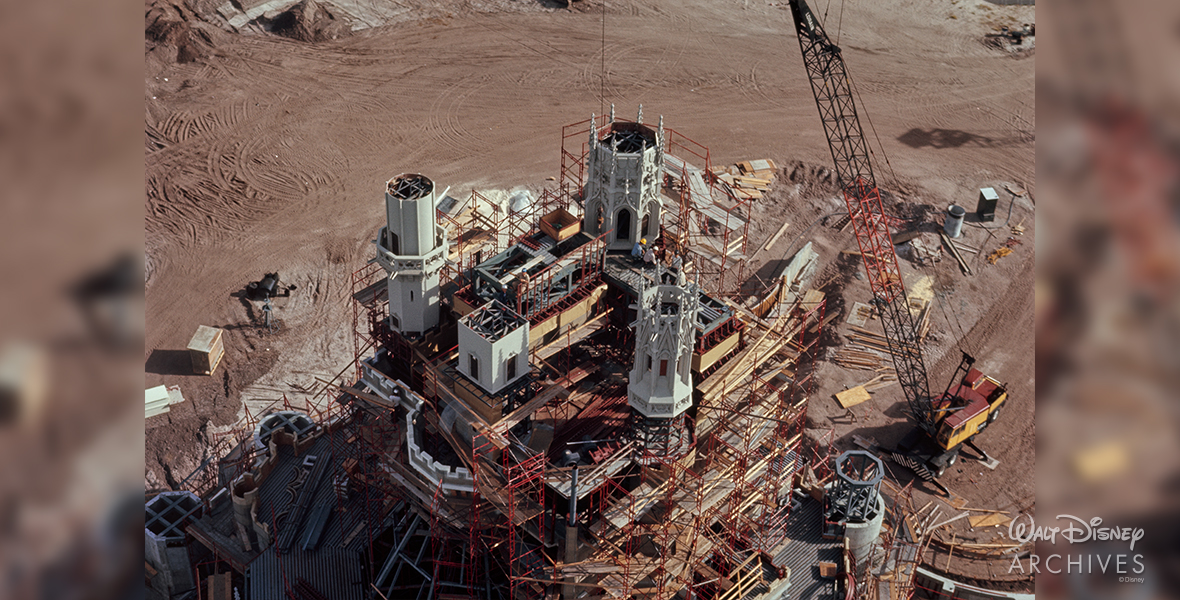 The towers of Cinderella Castle rise in this aerial view of the backside of the Castle facing southeast. 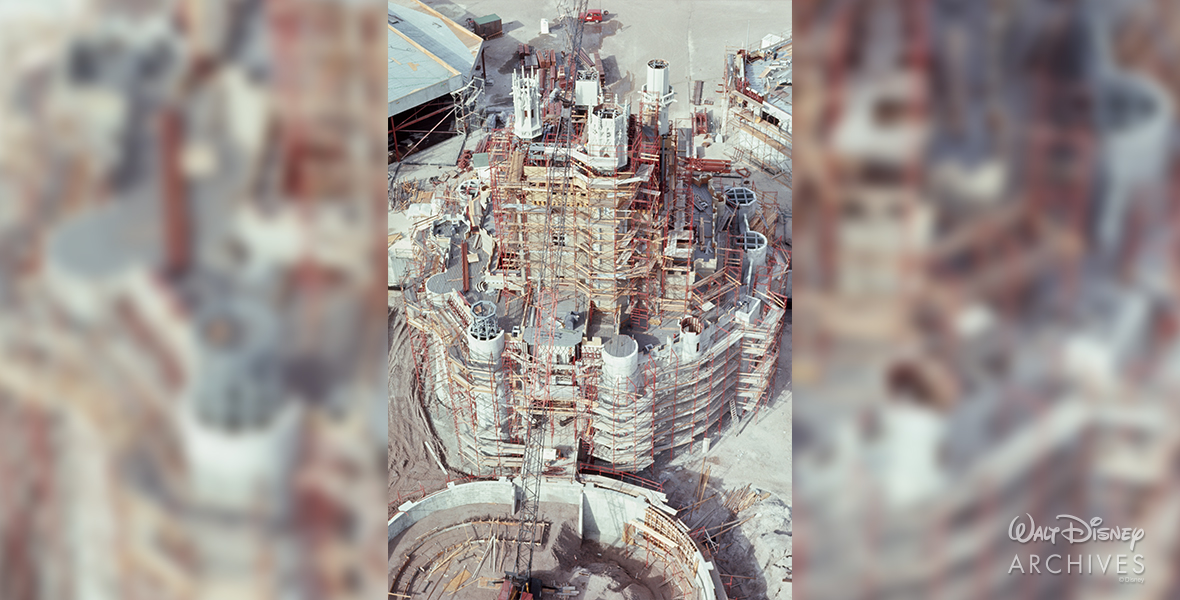 Aerial view looking at the front of the Castle. 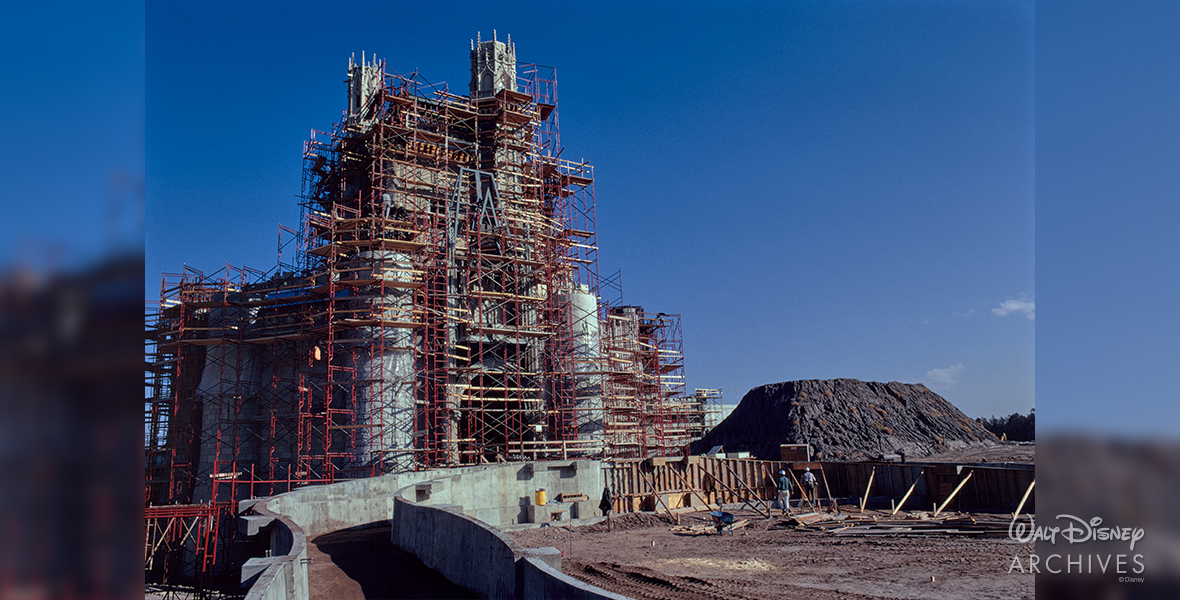 A shot of the Castle front taken from approximately where guests today ascend the west side ramp leading into the foyer. Notice the steel framework has been erected for the eventual clock above the entryway.

We hope you enjoyed part one of this two-part series chronicling the construction of Cinderella Castle. Check back with us soon for the exciting conclusion!