Star Wars: Galactic Starcruiser, an immersive-theater experience playing out over two nights, will open March 1, 2022, at Walt Disney World Resort—and although we just returned to Earth after embarking on an early voyage, we’re still seeing stars even now! The Halcyon starcruiser has a rich history in the Star Wars universe, but in case you’re unfamiliar with the glorious vessel, some experts are here to get you better acquainted.

Doug Chiang, Vice President and Executive Creative Director, Lucasfilm, says they approached the ship‘s design the same way they approached it for the Star Wars films. “There's a logic to it in terms of the form language, and why the spaces are there,” he tells D23. “When you do that homework, that automatically grounds it in something very familiar, and then we layer in the Star Wars aesthetic. The whole layout is very purposeful in terms of where the bridge is, where the restaurants are, how the hallways connect to the spaces, because that all ties into the exterior ship design. It makes everything onboard the Halcyon starcruiser feel very real—because it is, in some ways, very real.” 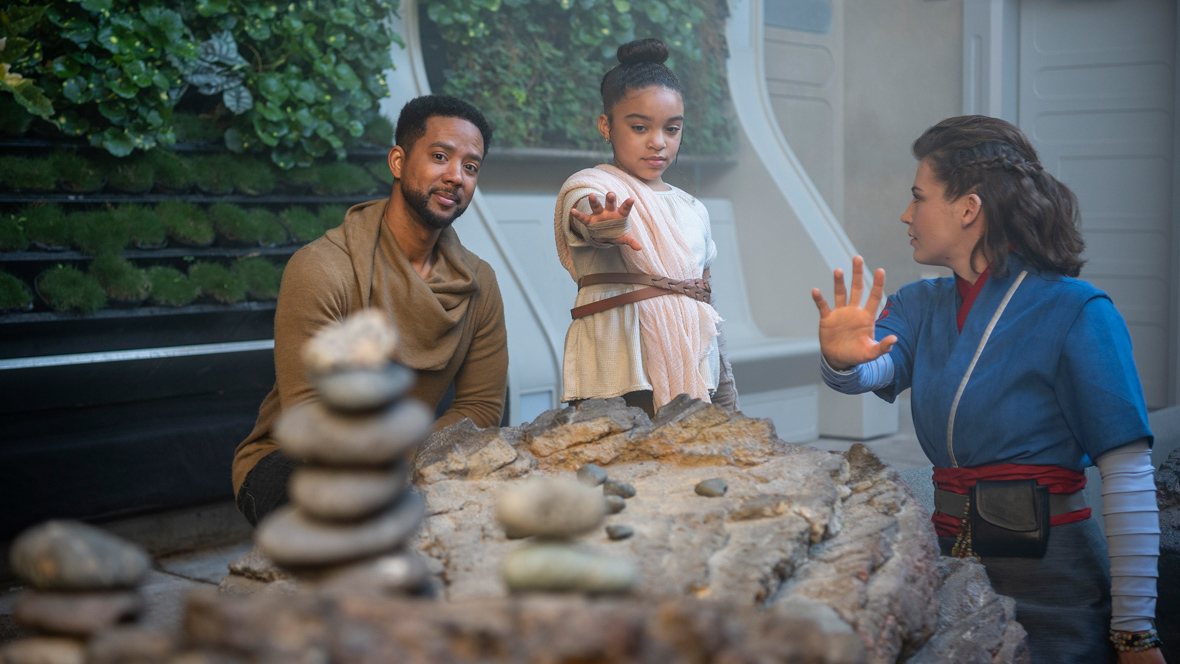 WE’VE GOT A GOOD FEELING ABOUT THIS
Your experience begins when you arrive at a terminal just outside of Disney’s Hollywood Studios. It looks like a non-descript bunker—but the minute you set foot inside the Launch Pod, you’ll see yourself hurtling toward the sky through a viewport on the ceiling! After the doors open, crew members will greet you in the Halcyon starcruiser’s Atrium, the ship’s central gathering space. Once everyone is onboard, Captain Riyola Keevan will welcome all to the ship from the muster. The Atrium is a good place to meet friends both old and new, and to participate in events and games.

“We designed a ship that needs to feel authentic and part of the Star Wars universe in the same way that the Millennium Falcon or the Tantive IV do,” Greg Ashton, Executive Architect, Walt Disney Imagineering, explains. “But it has to function. Guests have to be able to live in it and touch in it for two nights. We had to get all of the spaces to functionally lay out and integrate, but also have their own character. Some are moody, some are intimate. It was a great challenge for us to be creative but also pragmatic.”

As the story unfolds, passengers may find themselves embarking on missions in areas of the ship that would typically be forbidden. “With people spending so much time on the ship, we wanted it to be comfortable and sophisticated,” Ashton says. “Most of the ship is quite refined and well-appointed. But as you explore the Engineering Room, for example, there is a little bit of that Star Wars grit. Obviously, you see a lot of that when you go to Star Wars: Galaxy’s Edge and explore Black Spire Outpost, but it was fun to sneak that in here. We don’t show a lot of the behind the scenes, so to do it in-story adds to the overall experience: ‘We’re not supposed to be here, but let’s sneak away.’” 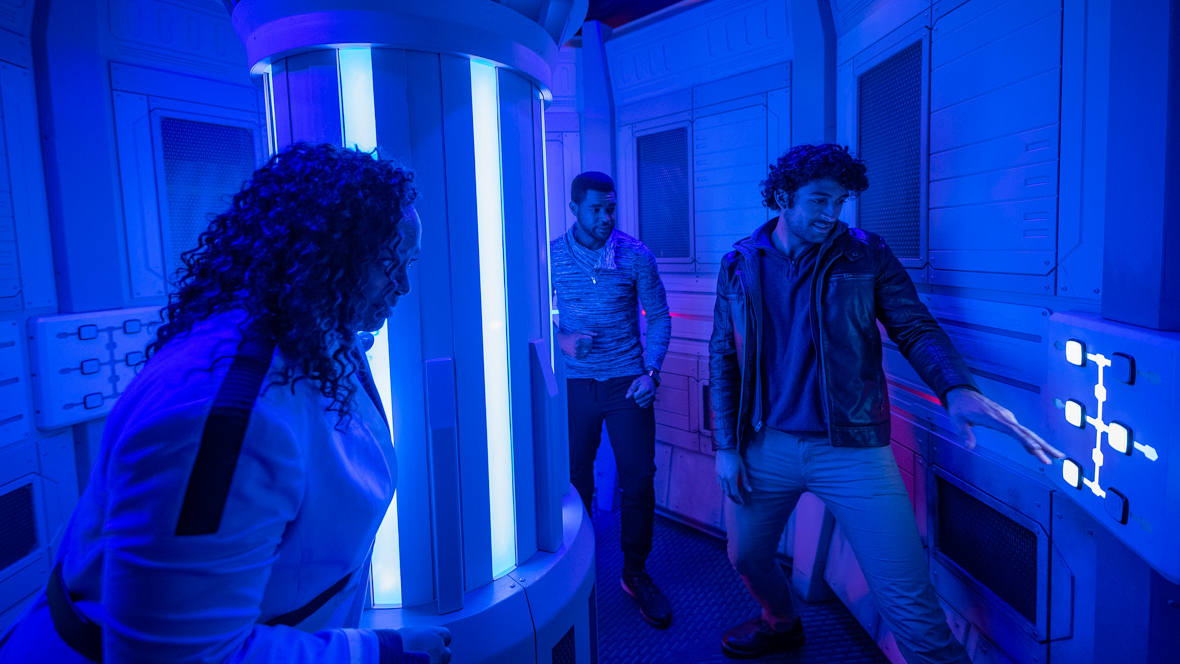 Matt Martin, Senior Creative Executive, Lucasfilm Ltd., adds, “That goes a long way with guests—that feeling of ‘I’m not supposed to be here, but I’m here, and look at all of this cool stuff!’ You hear people talk about it around the ship. A guest will say, ‘I was just in the Engineering Room,’ or, ‘I just in the Cargo Hold,’ so another guest will ask, ‘How did you get in there?’ It leads to some great story moments between the guests.”

If you prefer to take on a more passive role, there are plenty of things to appreciate onboard the Halcyon starcruiser. For example, the artwork hanging on the Mezzanine level in the Atrium is named “The Unified Galaxy,” depicting the Core Worlds all the way out to the edges of Wild Space. The piece was commissioned by Leia Organa and presented as a gift to the Halcyon starcruiser crew when she and her husband, Han Solo, honeymooned onboard the vessel after the battle of Endor. (Read all about it in Beth Revis’s novel Star Wars: The Princess and the Scoundrel, publishing August 16, 2022.)

The Hyperspace Compass on display in the Atrium honors the legacy of its original owner, Chandrila Star Line founder Shug Drabor. Across the way, a display case at the entrance to the Sublight Lounge holds a bottle of Chandrilan champagne from the same vintage as the year of the ship’s maiden voyage 275 years ago. As the bottle did not shatter during the ship’s christening, it was preserved as a symbol of good fortune. 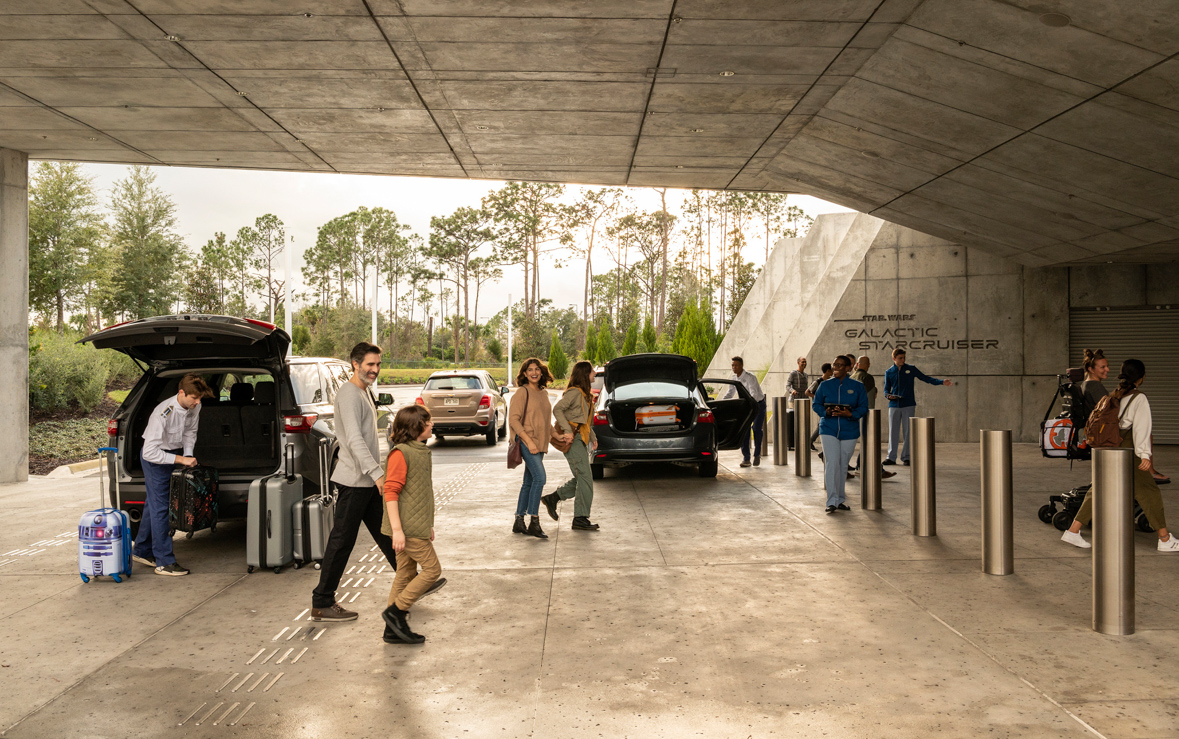 A GALAXY OF ENDLESS POSSIBILITIES
As we mentioned, passengers become part of the action as soon as they board the ship—meaning there are many interactive elements sprinkled throughout the Halcyon starcruiser. As such, the tactile design elements were just as important as the dazzling décor. “It was very important to us, in a lot of our interactive spaces, to make it feel like it was actually part of the ship—that when you push a button, you see something happen because of it,” Dan Brookwell, Production Designer, Walt Disney Imagineering, says. “For example, our Bridge is made up of a bunch of different stations where each person has a different responsibility to do something that will impact the ship. We actually had a large exploratory session to ask: What does each button feel like when you push it? Should it be like satisfyingly clicky... or very soft? It all goes back to story.”

Bryce Schulte, Interior Designer, Walt Disney Imagineering, adds, “What’s really interesting about the Bridge—and a lot of components onboard—is that we didn’t want to lose that graphic, analog nature that Star Wars is known for. Dan and his team have done a great job of incorporating and melding those button placements to the graphic line work to make it all cohesive.” 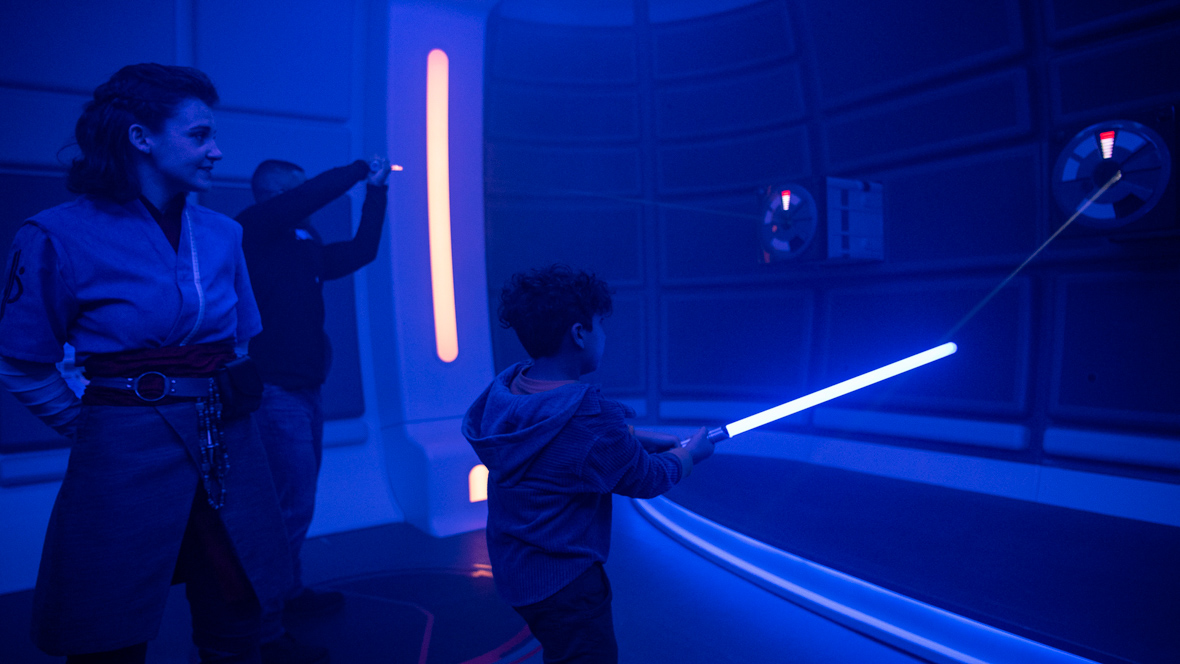 One of our favorite experiences took place in the Lightsaber Training Pod, a specially equipped room dedicated to training passengers in the ancient art of wielding a lightsaber. “We worked with the experience team to come up with how they train people to determine what the space would require,” Chiang says. “The Imagineering team was spectacular in terms of coming up with the gameplay. It’s a deep experience—so it has to be very fulfilling, but simple enough so kids and adults can all learn how to wield a lightsaber.” 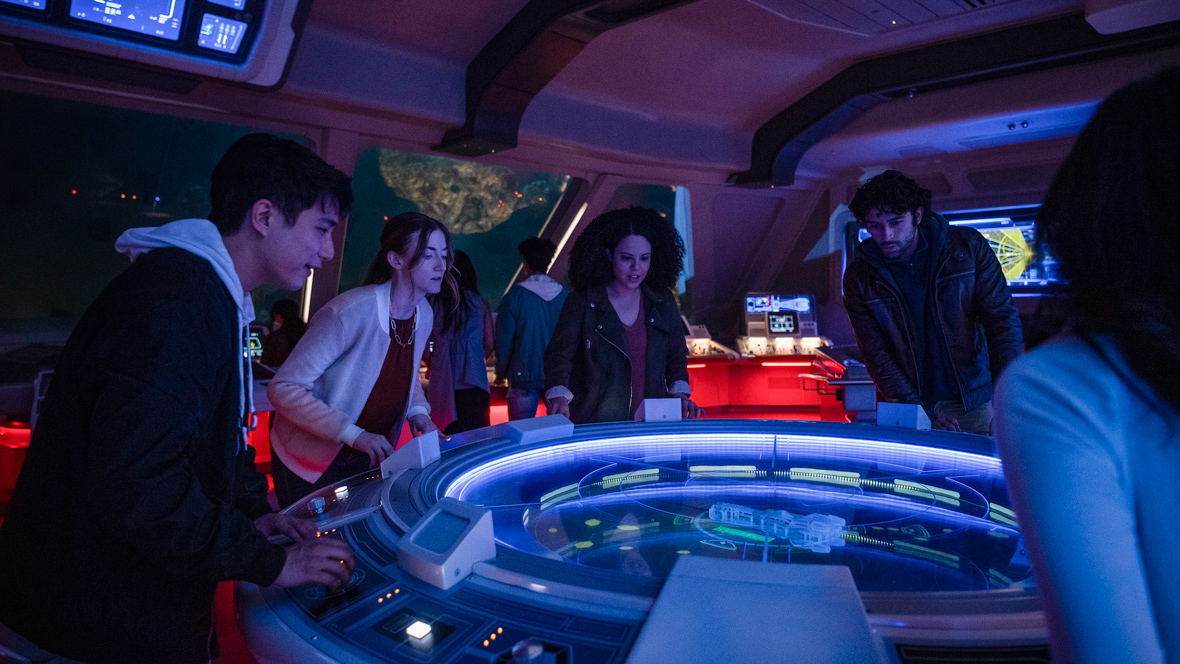 LET THE STARS BE YOUR GUIDE
Want to familiarize yourself with the rest of the Halcyon starcruiser? Read on for a brief overview...

While onboard the Halcyon starcruiser, you can access a map of the ship via any of the consoles, located in the Atrium and on multiple decks. In addition, the Star Wars: Datapad’s Map function (which you can access via the Play Disney Parks mobile app on your smart device*) provides the layout of the starcruiser, as well as Black Spire Outpost on Batuu.

May the Force be with you when your journey begins.

* Message, data and roaming rates may apply. Availability subject to handset limitations and device settings, and features may vary by handset, service provider or otherwise. Coverage and app stores not available everywhere. If you’re under 18, get your parents’ permission first.