Home / Headlines / Your Guide to 2020 Holiday Viewing from Across The Walt Disney ...

It’s a tradition as cherished as cookies for Santa: Grab the family, cozy up in your snuggliest festive sweaters and settle in for more holiday fare than eight tiny reindeer can possibly pull. This yuletide season, get ready for beloved classics and new favorites all across the networks of Disney, including Disney+, Hulu, Disney Channel, Disney Junior, Disney XD, ABC, FX, FXX, and ESPN. From Disney Parks Magical Christmas Day Celebration, a bright new season of The Great Christmas Light Fight, to original seasonal movies and holiday episodes of your favorite TV series, such as Raven’s Home and The Simpsons, there’s something this December for everyone. Even Scrooge.

Read on for our comprehensive list to help you schedule your season’s screenings; and discover more ways to virtually celebrate the holidays with Disney right here on D23.com.

Bluey—“Christmas Swim”
Bluey gets a new teddy for Christmas and introduces him to the whole family. But the family play too rough with him and now he wants to go home. Until Frisky convinces him to stay.
10:30 a.m. ET/PT on Disney Channel and in DisneyNOW 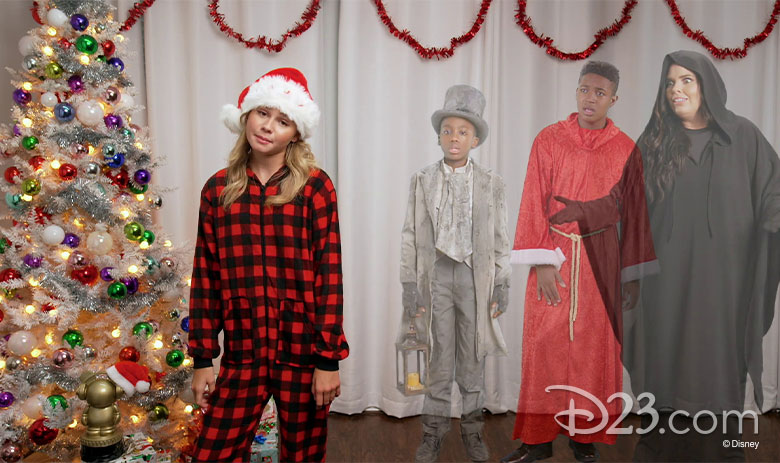 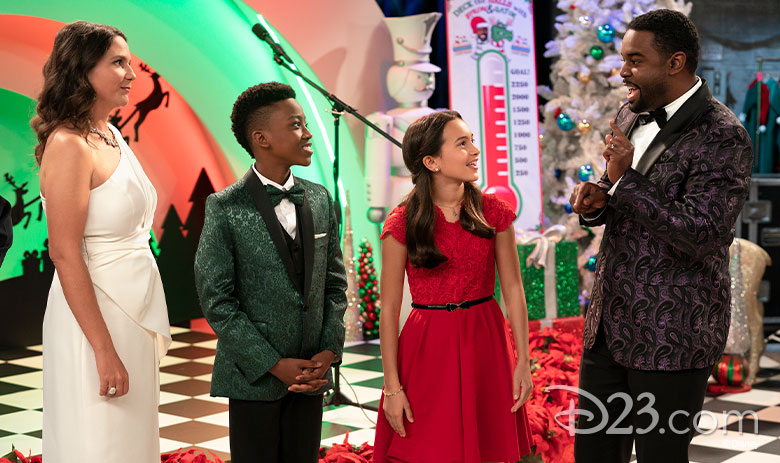 Just Roll With It—“The Most Wonderful Crime of the Year”
When Rachel is put in charge of running Beatz 101’s charity Christmas telethon and the starring act’s props and costumes are mysteriously destroyed right before the show, Owen takes it upon himself to uncover the mystery of “who dunnit.”
8:25 p.m. ET/PT on Disney Channel and in DisneyNOW

Vampirina—“New Century’s Eve” / “Bridget to the Brave”
In the first story of the episode, Vampirina and her family celebrate New Century’s Eve and learn that following their resolutions is harder than they thought. Then, Bridget finds a spell book in the attic and accidently casts a spell that makes her fearsome instead of fearless.
11 a.m. ET/PT on Disney Junior and in DisneyNOW 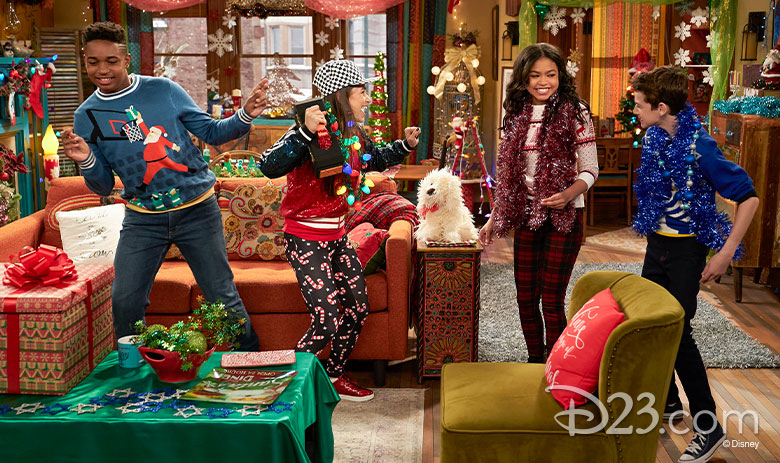 Raven’s Home One-hour Holiday Episode—“Mad About Yuletide”
It’s Christmas Eve and the Baxter/Grayson family are trying to make the best of the holiday when a storm hits and disrupts their plans to celebrate together at a cabin on the lake.
8 p.m. ET/PT on Disney Channel and in DisneyNOW

Fancy Nancy—”New Year’s Nancy” / “Nancy’s Gift to Grandpa”
In the first story of the episode, Nancy wants to stay up until midnight on New Year’s Eve, but finds that staying awake is harder than she thought. Then, to cheer up Grandpa on a wintry day, Nancy draws a masterpiece in chalk on the driveway.
*Kal Penn and Aparna Nancherla (both from Disney’s Mira, Royal Detective) return as Mr. and Mrs. Singh. George Wendt (Cheers) returns as Nancy’s Grandpa.
12 p.m. ET/PT on Disney Junior and in DisneyNOW 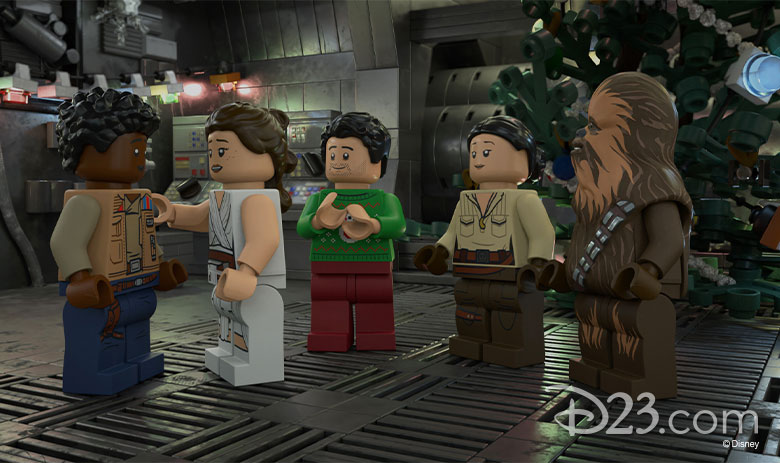 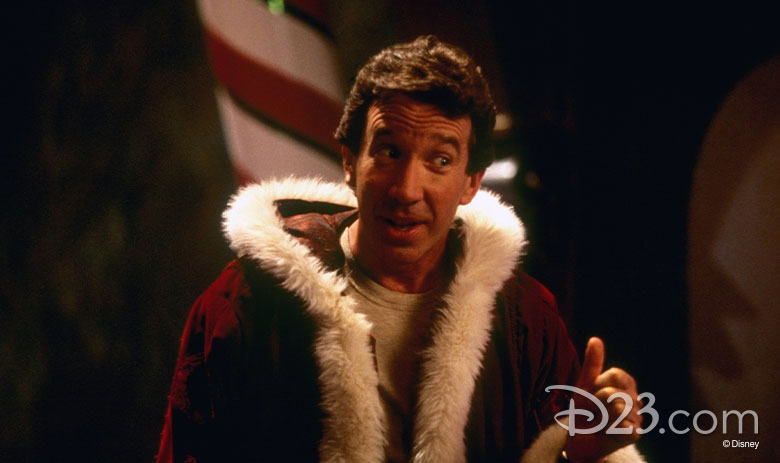 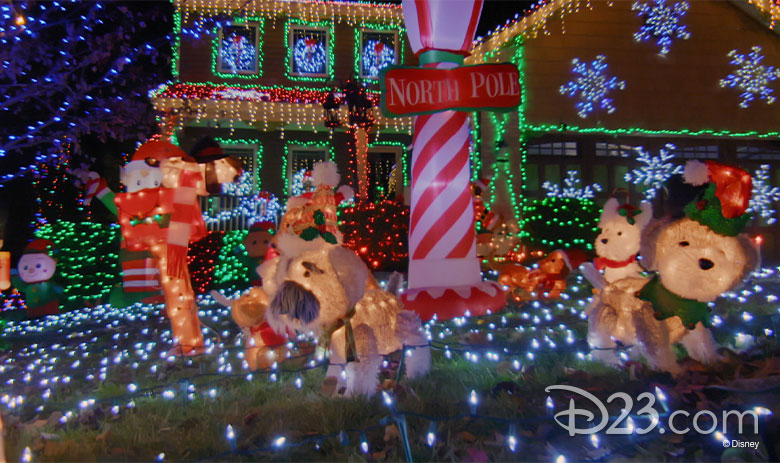 The Sound of Music—ABC will air the Rodgers & Hammerstein cinematic treasure The Sound of Music. Celebrate the Oscar®-winning classic with popular favorites “Edelweiss,” “My Favorite Things,” “Climb Every Mountain,” “Do-Re-Mi,” “Sixteen Going on Seventeen,” “The Lonely Goatherd,” and “The Sound of Music.” (7–11 p.m. ET/PT)

General Hospital—As holiday celebrations begin in Port Charles, Carly and Jason return to Sonny’s house to find that in her absence Michael and Joss have stepped up and added all the finishing traditional touches for a beautiful multigenerational family Christmas at home. (2–3 p.m., check local listings)
The Great Christmas Light Fight (9–11 p.m.)—Season Finale

Deck the halls and celebrate Christmas all month long with Freeform and the highly anticipated “25 Days of Christmas” month-long event. (All times ET) 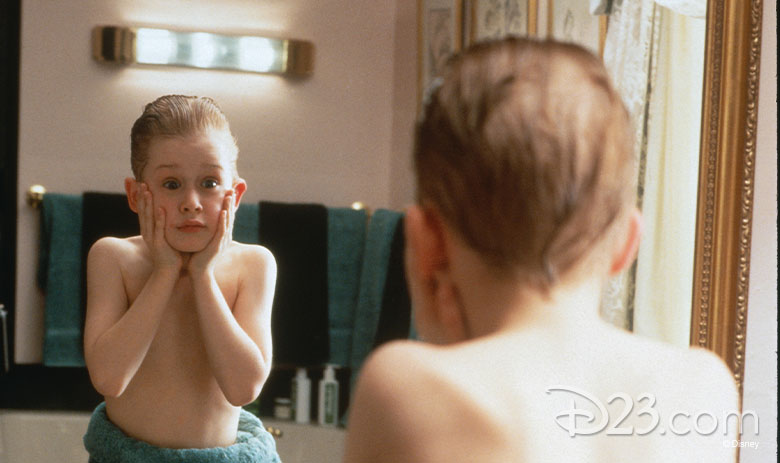 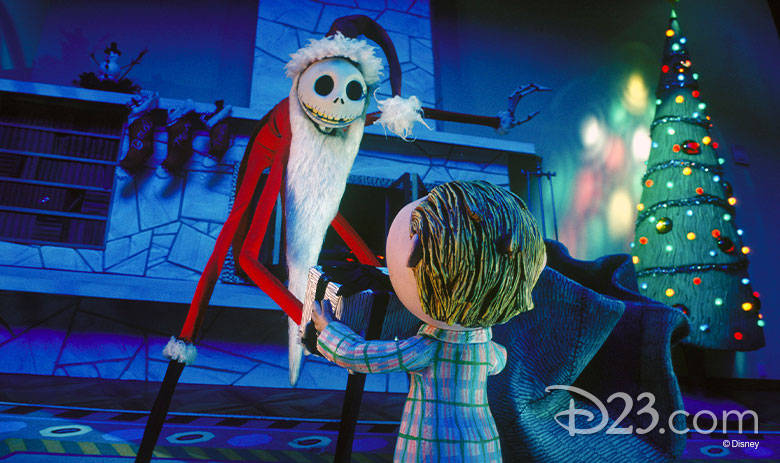 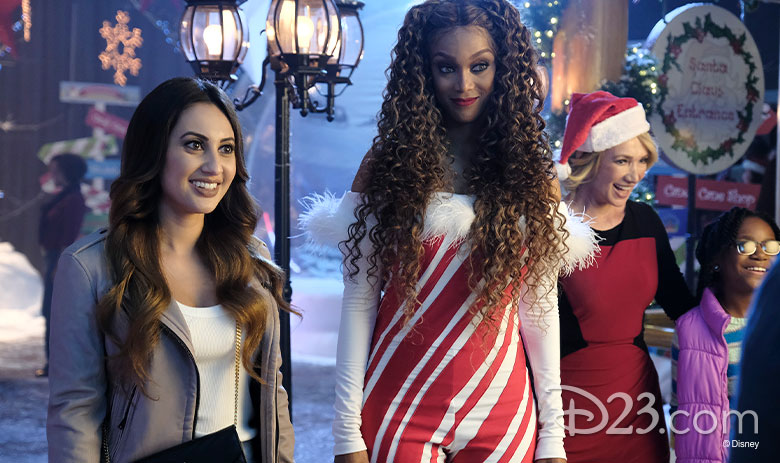 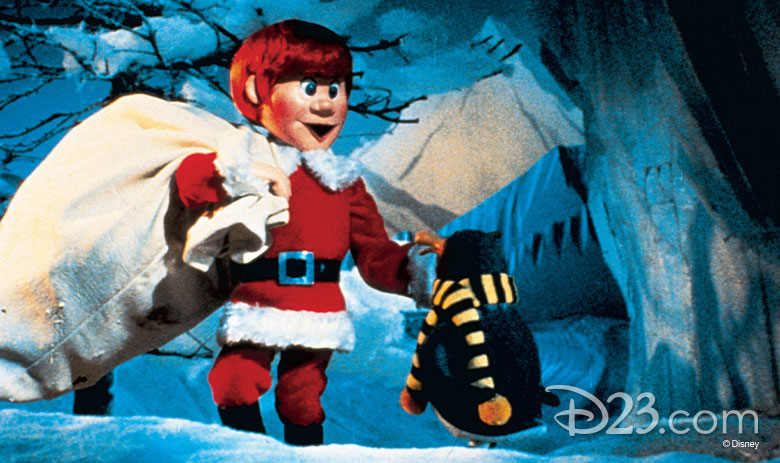 FX’s: A Christmas Carol Special Presentation
Thursday, December 17 (8 p.m. and 11:30 p.m. ET)
Wednesday, December 23 (7 p.m. and 10:30 p.m. ET)
FX
The dark and modern retelling starring Guy Pearce and Andy Serkis will bring you deep into the soul of Ebenezer Scrooge as he’s haunted by the Ghost of Christmas Past, Present, and Future to expose the man whose name is synonymous with greed. 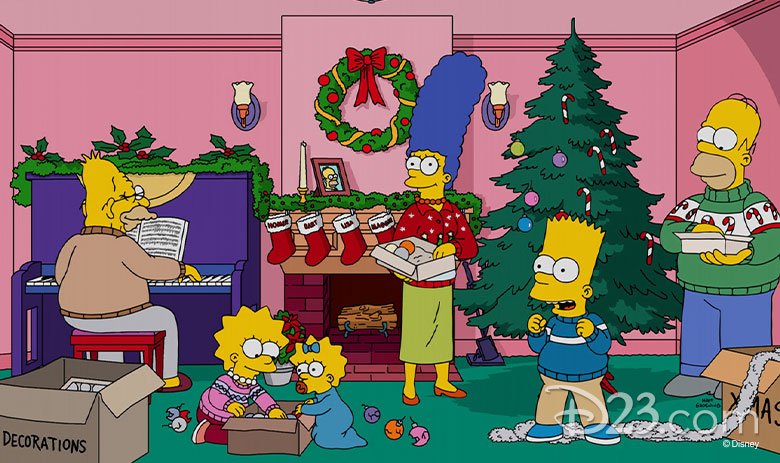 FXX Christmas Movie Marathon
Friday, December 25 (7 a.m. – 6 p.m.)
FXX
Settle in with the fam and relax with films including Why Him? and Daddy’s Home 2. Fun no matter who you call family!

FX New Year’s Eve Superhero Movie Marathon
Thursday, December 31 (8 a.m.–3 a.m.)
FX
Team up with the world’s greatest antiheroes to knock 2020 out and show the New Year who’s boss with a lineup of films that includes X-Men: Apocalypse and Deadpool.

The Simpsons New Year’s Marathon
Begins Thursday, December 31, at 1 p.m. ET, concludes Friday, January 1, at midnight
FXX
Forget the old year and ring in the new one with Homer, Marge, Bart, Lisa, Maggie, and the residents and visitors of Springfield. If only the whole year could be this good! 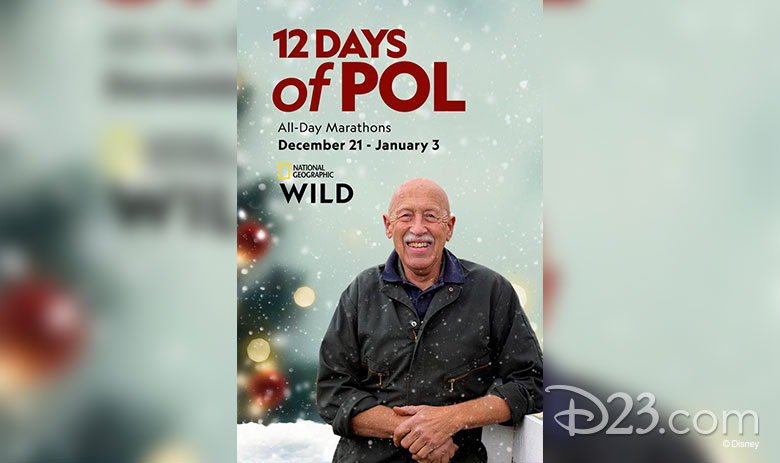 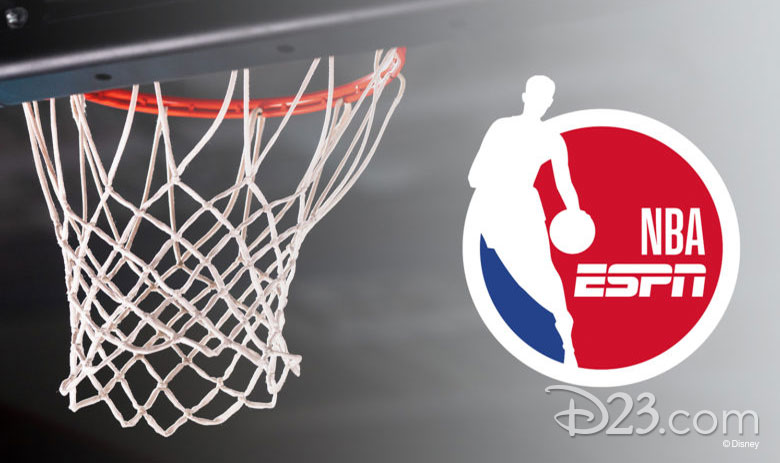 A Christmas Carol (2019)
Ebenezer Scrooge experiences a dark night of the soul in an original take on Charles Dickens’ iconic ghost story. 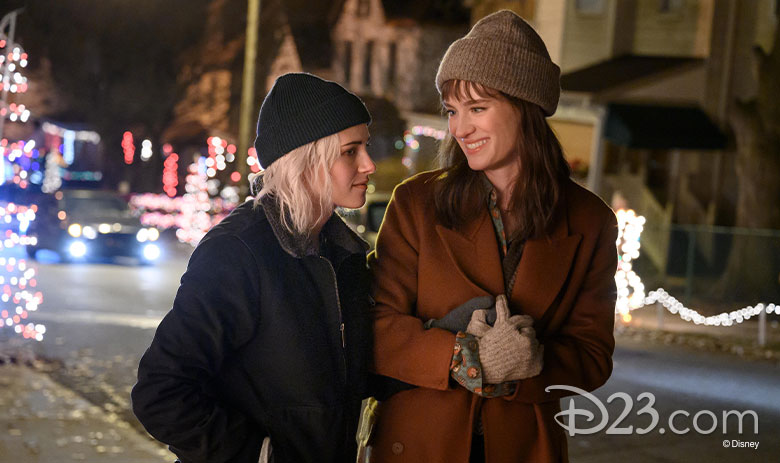 Happiest Season
A woman learns that her girlfriend hasn’t come out to her conservative parents in this original Hulu movie.

A Very Brady Christmas
Deck the halls with love and laughter as the Brady Bunch comes home for Christmas! Mike, Carol and the whole gang are back, in a warm and wonderful two-hour special featuring all of the characters from the popular series—plus their new families.

Christmas Cookie Challenge
Flour will cloud the air as a festive yet furious battle ensues between bakers to determine the best cookie baker in the country.

A Christmas Solo
Two single parents try to use the Christmas magic to calm down the rivalry between their daughters, however they discover that they are not immune to that magic themselves.

Christmas on Holly Lane
Three life-long friends reunite on Christmas in order to help each other’s lives, and in the process their own as well.

Curious George: A Very Monkey Christmas
George and The Man in The Yellow Hat are having a merry time counting down to Christmas. But neither can decide what to give each other. Will they find the answers before Christmas morning?

Arthur Christmas
When Santa misses one child out of hundreds of millions, someone has to save the day. It’s up to Arthur (James McAvoy), Santa’s youngest son, to deliver a present to the forgotten tyke before Christmas morning dawns.

Holiday Gingerbread Showdown
Nine food artists use detailed workmanship and compelling techniques in a four-night battle. The winner takes home $25,000, the title of Best Gingerbread Artist in America and earns a feature in Food Network Magazine.

Holiday Baking Championship
Eight bakers enter the kitchen to show off their traditions and baking skills.

Home Alone: The Holiday Heist
A young boy is forced to booby trap his house to defend against a group of hapless thieves in this fifth film in the Home Alone series.

Eve’s Christmas
On Christmas Eve, a high-powered executive’s guardian angel offers her a chance to live her life again with a different spin.

Deck the Halls
Holly (Gabrielle Carteris, Beverly Hills, 90210) returns to her hometown with her 8-year old son, Ben, to work for her father’s toy business. Soon after, Ben watches a man (Steve Bacic, Big Love) move in next door with a sleigh, red suit and lots of Christmas goodies. Ben begins to believe that their new neighbor is Santa Claus, and devises a plan to set up his mom with Santa Claus.