For decades, Disney Ambassadors have been a constant presence around the globe, attending special events, supporting charitable causes, and spreading goodwill. But the long tradition began with a single individual—Julie Reihm Casaletto, the very first Disneyland Ambassador.

Julie was born in Galveston, Texas, but the Reihm family moved to Long Beach, California, when she was three months old. After high school, she attended California State Long Beach to study speech. As a part-time job, she became a tour guide at Disneyland. Working weekends and summers in the Park, she soon came to know Walt Disney and quickly got to experience Walt’s impish sense of humor.

“I had first met him in the Park when I was a tour guide,” Julie recalls. “He followed me up Main Street.” One of the members of Julie’s tour group was upset that there was a man who hadn’t paid for it following the tour. She told Julie that that the man shouldn’t get the same information as a paying guest. Julie had hoped that Walt overheard and would move along, because, as she says, “It would have been highly unusual to go up to the man who owned the place and tell him to run along.”

“He just winked and grinned at me and walked away. I think he enjoyed taking you a little bit by surprise, and seeing your reaction to things. He delighted in seeing other people delighted.”

After two years as a tour guide, Julie was encouraged to apply for a new role—that of “Disneyland’s Ambassador to the World.” As Walt’s commitments had increased and his free time dwindled, he found it hard to attend all the events to which he was invited. Disney needed a representative who could travel the world, speaking for Walt when he could not be there in person. Although she initially turned down the offer to become Ambassador—taking a year off from her studies didn’t seem wise—she eventually changed her mind and was chosen as Disneyland’s first Ambassador in 1965.

As first Ambassador, she was chosen as “a personification of Disneyland’s world-famous spirit of friendliness and happiness.” She became the template upon which decades of Ambassadors would pattern themselves.

At the time, Julie expressed her genuine enthusiasm for the opportunity the role presented, and the advantage two years of tours for guests from all over the world offered. “I’ve learned so many fascinating things about so many places from them, I can hardly wait to see them for myself. I feel I’ve travelled everywhere because of the wonderful people I’ve met at Disneyland.” 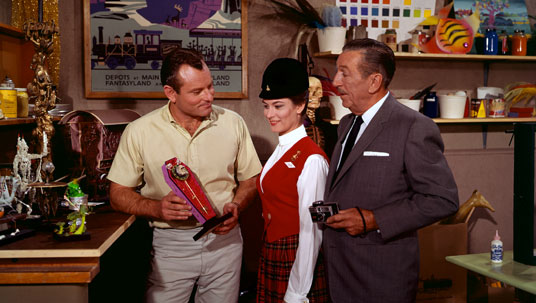 In 1965, on the occasion of Disneyland’s “Tencennial,” the 10th anniversary of the Park opening, Julie was a key part of the festivities. She appeared on the Wonderful World of Color episode “The Disneyland Tenth Anniversary Show,” where Walt introduced her to Disney Legends such as John Hench and Marc Davis, while giving a preview of upcoming attractions such as the Haunted Mansion and Pirates of the Caribbean. “The highlight of my year was to see Walt smiling ear to ear about a new idea—a new project—and feeling his boyish excitement,” she later recalled.

Julie also attended several events related to the release of Mary Poppins. Her travels took her to most of the United States and several foreign nations, where she often accepted awards and honors on behalf of Walt. She logged more than 52,000 miles in the United States, Europe, and Asia.

After a year serving as Ambassador, Julie returned to her studies—despite attempts to convince her to stay with Disneyland. She would return on occasion to give tours to VIPs or attend special events, but eventually left California to raise a family in Virginia. She continues to hold fond memories of her time as Ambassador, and of her time spent with Walt. “He wasn’t just a great creative person, he was a good ‘common sense’ person, and he was a person who was tenacious about wanting to get something right, doing the right thing, being there at the right moment—it all meant so much to him. And that was something that we shared, and he realized it, and I realized it, so that was a quick bond for the two of us.”