In 2015, the Walt Disney Archives embarked on an international touring exhibit program, Winnie the Pooh Exhibition, which is currently traveling throughout the country of Japan. After opening at Tokyo’s Matsuya Ginza department store on August 6th, the exhibition continues traveling into select Japanese cities well into 2016.

In showcasing more than 400 historical objects celebrating everyone’s favorite “willy, nilly, silly old bear,” the exhibit aims to present the history, art, and legacy of Disney’s Winnie the Pooh to viewers of all ages.

Let’s take a brief virtual tour of what stories and sights the exhibit includes. 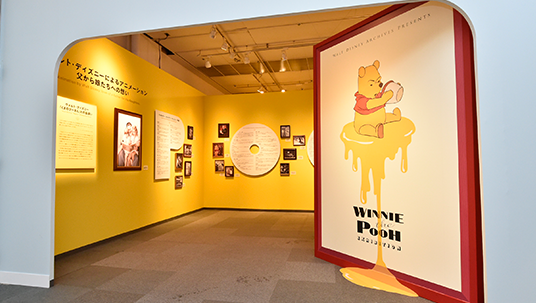 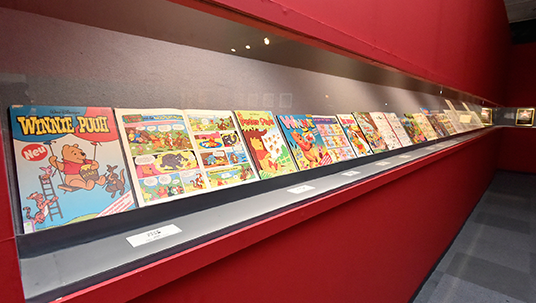 From A. A. Milne’s inspiration for the character and the Hundred Acre Wood (where Winnie the Pooh and his friends live) to Walt Disney’s telling of the stories, the character’s journey into animation, and the history of the animated features, this special exhibition takes visitors to the world of Winnie the Pooh with animation sketches, maquettes, and worldwide Winnie the Pooh nostalgia. 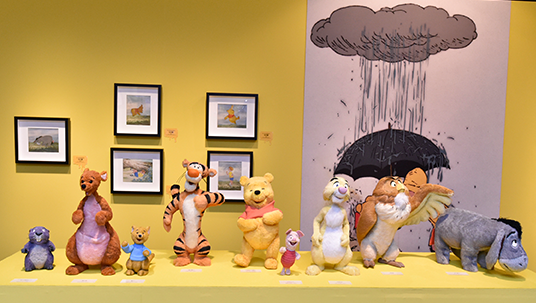 Winnie the Pooh is perhaps the most iconic—and beloved—teddy bear in the world. British author Alan Alexander Milne began his career as an essayist, editor, novelist, playwright, and poet—but it wasn’t until 1926 that he published the whimsical book that introduced the teddy bear. 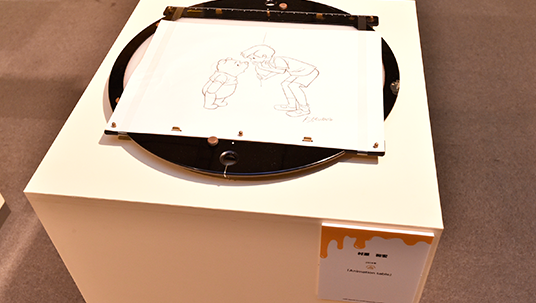 A. A. Milne never intended to be a “children’s” author, but after the birth of his son (named, incidentally, Christopher Robin) he began writing poems that were meant—just as were Walt Disney’s films—for “the child in all of us.” Milne’s legacy was firmly established by the four “children’s books” of verse and stories he wrote about his son’s adventures with a certain bear “of very little brain,” the world’s beloved Winnie the Pooh. 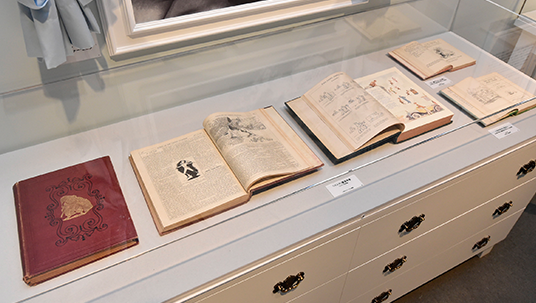 A loving father who often read aloud to his children, Walt Disney saw how much joy his daughter Diane found in the Winnie the Pooh books. He thought they would be perfect for animation, so after the success of Snow White and the Seven Dwarfs in 1937, he began pursuing the film rights. 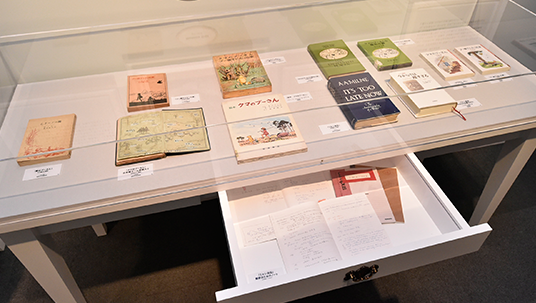 Momoko Ishii was a distinguished Japanese author, critic, editor, and translator of children’s books. As an editor at Iwanami Shoten Publishers she had “a blissful encounter with A. A. Milne’s Pooh books.” She decided to become a writer of children’s literature, and a thoughtful translator into Japanese of what she felt were important children’s books. The first translation she attempted was Winnie the Pooh. 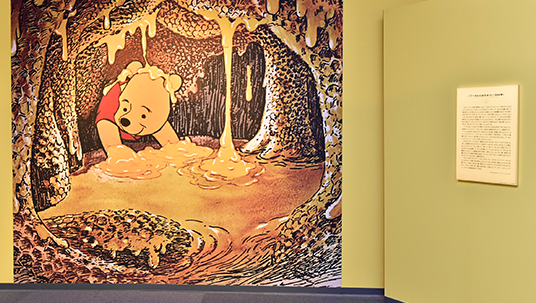 While Walt wanted to make sure the Pooh films had a Disney look, he and his artists also respected and admired the genius of Ernest Shepard’s delicate drawings, which perfectly matched the whimsy of Milne’s stories. 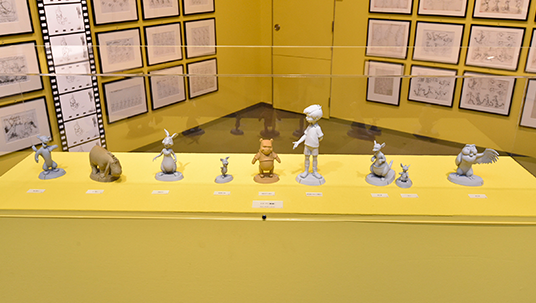 Walt also wanted the films to have the illusion of storybooks coming to life, so the films open in a live-action nursery featuring real stuffed toys. Book pages turn of their own accord, and the characters, which first appear to be merely drawings on a background, begin to animate across the page. 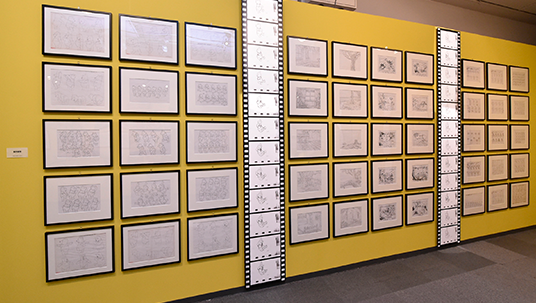 One of Disney’s famed “Nine Old Men,” Wolfgang Reitherman, directed the first Pooh featurette, Winnie the Pooh and the Honey Tree. It was released on February 4, 1966, and was an immediate hit with American audiences. 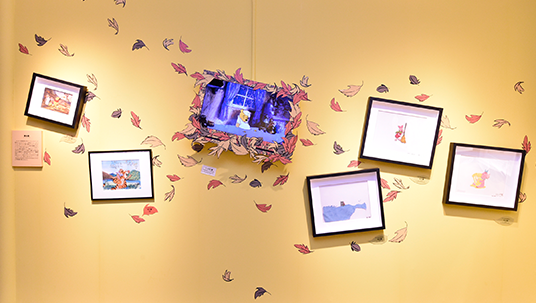 Several of Disney’s famed “Nine Old Men” joined the animation team to make the second Pooh featurette, which, like the first, was directed by Woolie Reitherman.Winnie the Pooh and the Blustery Day was released in December 1968. The film was a tremendous success with audiences and critics, and it received an Academy Award® as best animated short film. 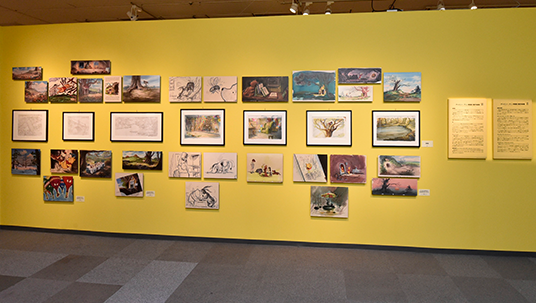 Two chapters in The House at Pooh Corner, A. A. Milne’s second Pooh book, inspired Disney’s Winnie the Pooh and Tigger Too, which was released in 1974. Another of Walt’s top animators, John Lounsbery, directed the film. 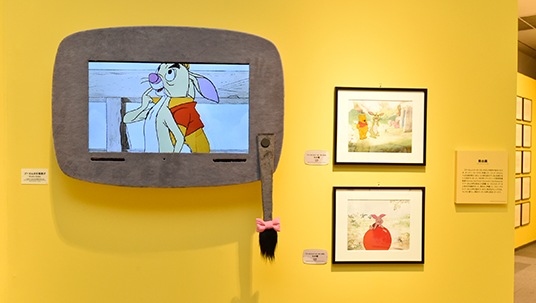 As production of Winnie the Pooh and a Day for Eeyore (1983) began, veteran Disney voice performer Sterling Holloway was getting ready to retire and decided not to continue his signature role as Winnie the Pooh. Actor Hal Smith, who in 1981 had voiced Pooh for Disney’s educational film Winnie the Pooh Discovers the Seasons, took over the role. 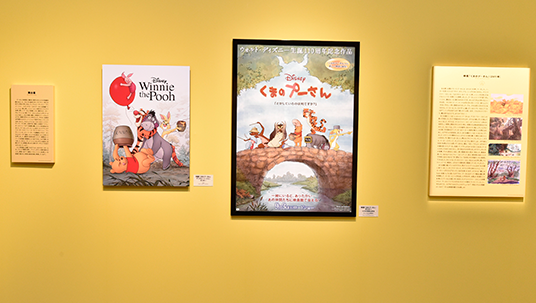 Although several more Pooh movies had followed the first four featurettes, each telling brand-new stories about the characters, Walt Disney Animation Studios decided it was time to bring Winnie the Pooh back into the feature animation division and make a new Pooh film, Winnie the Pooh, inspired by A. A. Milne’s original stories and what producer Peter Del Vecho called “the great storytelling and wit of those first movies—Honey Tree and Blustery Day…” This also meant a return to traditional hand-drawn 2-D animation. 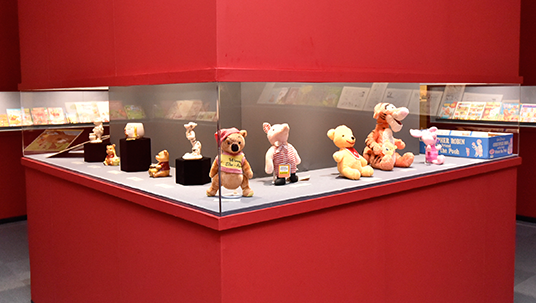 The public adored the bear of very little brain right from the beginning: the publication of A. A. Milne’s original tales led to a plethora of Pooh dolls, toys, songbooks, calendars, games, and even dish sets. But it would take Walt Disney and his creative team to create a Hundred Acre Wood that truly circles the globe.