Home / Headlines / Teaming Up with the Incredible Hulk in Marvel's Midnight ...

Ready to immerse yourself in the darker side of the Marvel Universe? Assemble an unlikely team of iconic Marvel heroes, including the Hulk as he goes from possessed enemy to powerful ally, and fight back against Lilith, Mother of Demons in Marvel's Midnight Suns, available now on PC, Xbox Series X|S, and PlayStation®5!

Marvel’s Midnight Suns is a card-based tactical RPG from Firaxis Games, the creators of XCOM, Civilization, and more. As the Hunter, a legendary demon slayer with a mysterious past, you’ll lead iconic Super Heroes like Iron Man, Ghost Rider, Wolverine, and more in the fight against Lilith, desperately trying to stop her from completing an ancient prophecy that could unleash an even greater evil upon the world.

You’ll need all the heroic help you can get in the battle against Lilith, who’s assembled a team of her own using her infernal powers of persuasion. Lilith’s demonic influence can brainwash others into battling on her behalf as fearsome, transformed thralls, meaning the Midnight Suns will have to go toe-to-toe with Fallen versions of Sabretooth, Venom, Scarlet Witch, and Hulk.

But with enough persistence, you can break Lilith’s spell and persuade some of these characters to join the ranks of the Midnight Suns. During a recent developer livestream, the folks at Firaxis confirmed that Hulk will team up with the Midnight Suns as a playable character near the end of the campaign, lending his immense physical might, unbreakable resilience, and focused rage to the ongoing fight against Lilith and her minions.

For more details on how Hulk breaks the supernatural shackles of his Fallen form and the hybrid tank-and-damage role he brings to your squad, we spoke with Firaxis Games’ Joe Weinhoffer, Lead Designer on Marvel’s Midnight Suns. Read on as Joe explains the jade giant’s abilities and how you can harness Hulk’s incredible strength in this exclusive Q&A. 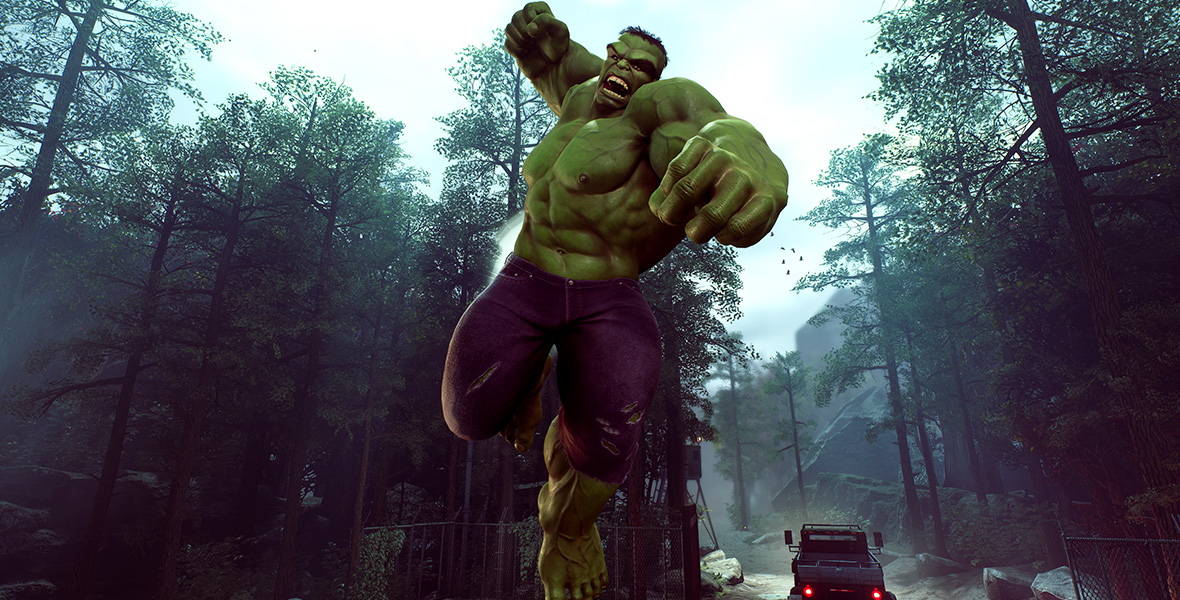 What is Hulk’s main role during tactical missions?
Joe Weinhoffer: Hulk is both a tank and a powerful damage dealer. Hulk’s main mechanic is Rage, which increases his Offense whenever he takes damage and is consumed when he uses Attack or Heroic abilities. Hulk has many Taunt abilities to draw fire from enemies, which generates Rage and protects his allies. He can then unleash that Rage in extremely powerful, high-damage Heroic attacks. The trick to using Hulk is to take enough hits to maximize Rage and damage output without suffering so much damage that Hulk gets KO’d!

How did you approach Hulk’s transformation from Fallen enemy back to Super Hero teammate?
JW: We actually designed Fallen Hulk’s abilities first! As a starting point I took those Fallen abilities and brought them over to the hero version of Hulk (with a few visual differences), so players can use the powerful attacks they had previously been fighting against. Of course, we needed to make some gameplay adjustments, balance his power level, and tie everything together with the Rage mechanic to ensure Hulk’s abilities feel cohesive as a set. Once I finalized how Rage would work and that Hulk would Stun enemies more than other heroes, I designed his remaining abilities to fill in the gaps.

What were the most challenging aspects of designing Hulk as a playable hero in Marvel’s Midnight Suns?
JW: Hulk is immensely powerful compared to other heroes, so it’s always challenging to find gameplay mechanics to fit that narrative without making him totally invulnerable or game-breaking to play. Even with that in mind, our Hulk still ended up being very strong compared to other heroes… you may even want to go up a difficulty level or two once he’s unlocked! 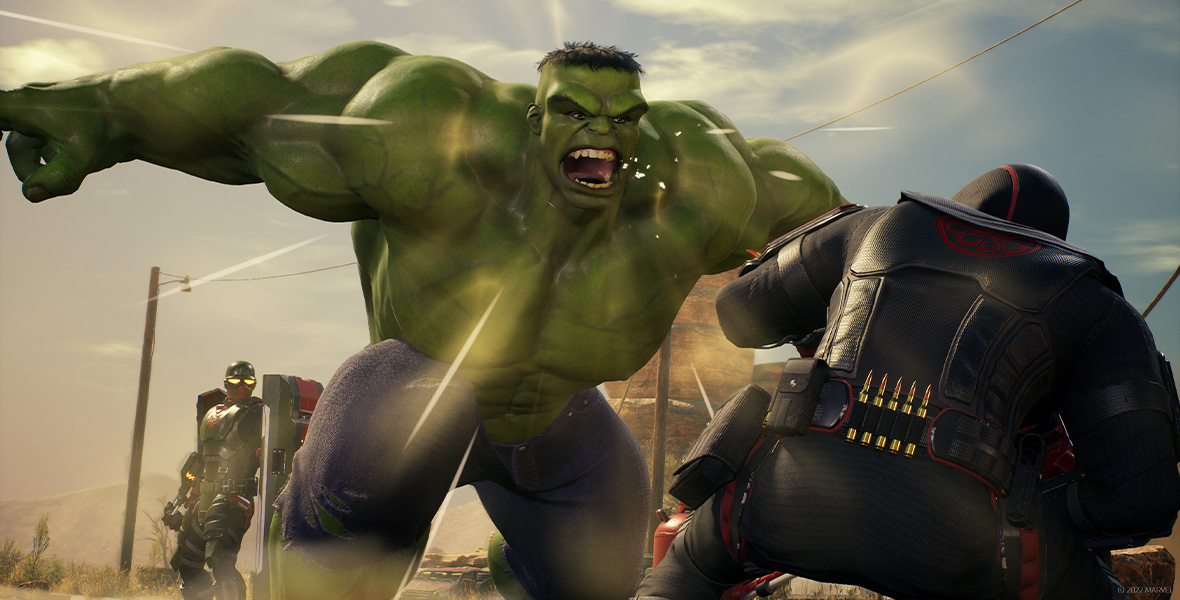 Is there a particular ability that you feel sets Hulk apart from the other Midnight Suns?
JW: Hulk’s “Always Angry” Epic Skill ability is very unique, as it is the only active ability in the game that allows a hero to increase their maximum Health. It consumes all of Hulk’s current Rage to restore his Health, which is Hulk’s only method of self-healing. However, if Hulk is overhealed, it will also increase his maximum Health by that amount. If “Always Angry” is played when Hulk has nearly full HP and a lot of stored-up Rage, his Health can get a serious boost, helping him easily tank damage for the rest of the mission!

How can players add Hulk to their Midnight Suns roster?
JW: Hulk joins the roster very late in the Midnight Suns story, just before the finale. Once unlocked, players can use him as they would any other hero by going on general missions, earning and upgrading abilities, and progressing research projects before deciding to embark on the final mission. Hulk will remain on the roster after finishing the story if you want to keep playing in the Endgame mode, and he is also fully playable from the start of a New Game+ campaign.

Did Lilith’s influence have any lasting effect on Hulk’s attitude or abilities?
JW: Once Hulk joins the roster, he is back to being the Green Goliath you know and love, except now his anger is directed at Lilith and he’s out for revenge! However, Bruce Banner is certainly scarred from his time under Lilith’s influence.

When we’re not controlling Hulk on the battlefield, will we be seeing Bruce Banner in The Abbey?
JW: Yes! While back at the Abbey, the Midnight Suns’ headquarters, Bruce Banner will be in control rather than allowing Hulk to smash his way through the Common Room.

Which Midnight Suns heroes do you personally like to team up with Hulk for tactical missions?
JW: I love teaming up Hulk with Nico, Captain America, Doctor Strange, or my Hunter built with a focus on Light abilities. Those heroes can all take on support roles to heal Hulk, generate a lot of Heroism, draw cards, reduce the cost of Heroic abilities, or provide other beneficial effects to allies. They allow Hulk to play his abilities faster, keep him healthy as he takes damage to build up Rage, and then get out of the way when Hulk unleashes his devastating attacks! 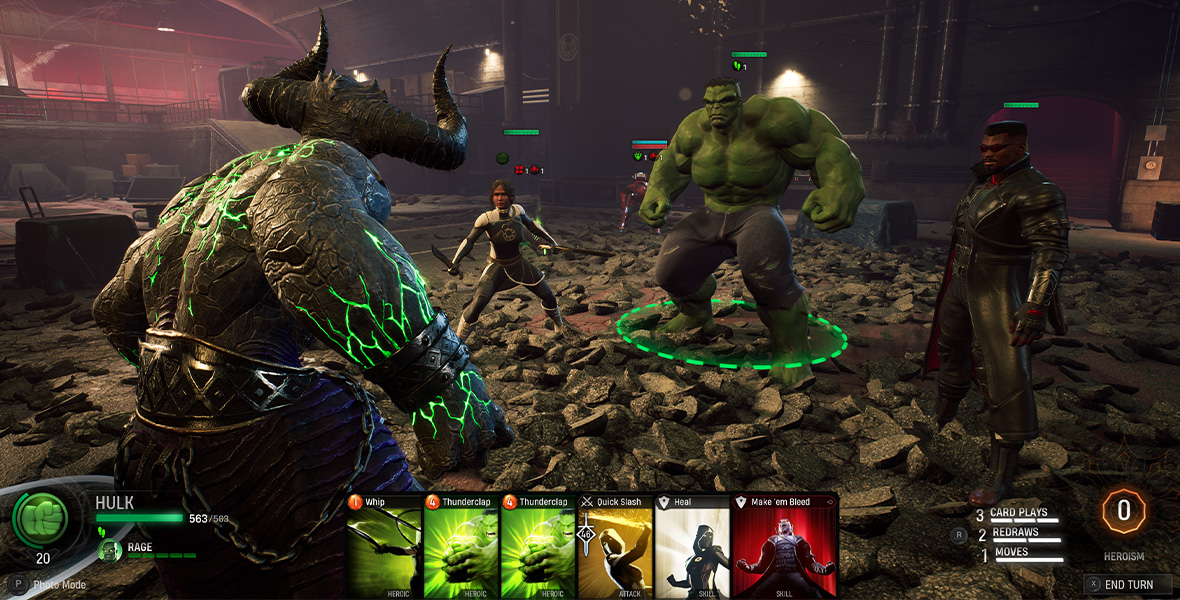