The first time Ryan Reynolds read the script for Free Guy, he was hooked. “The logline spoke to me,” says the actor and producer, who subsequently sent it to director Shawn Levy. “It’s just a simple kind of action comedy: ‘Bank teller discovers he’s a background player in an open world video game.’ And I thought, ‘That’s provocative. That’s amazing!’”

The action comedy from 20th Century Studios, opening in theaters December 11, 2020, is set both in the real world and in the open world video game Free City. It centers on Guy (Reynolds), a non-player character, or NPC, who doesn’t know he’s in a video game. Thanks to a code developed by programmers Milly (Emmy® Award winner Jodie Comer, in her first feature film role) and Keys (Joe Keery), Guy eventually pieces together what’s going on and decides to become the hero he never dreamed he could be. “All of us have felt stuck in a loop and all of us have felt like a background character in someone else’s story,” argues Levy, who adds that the idea of noticing and empathizing with a person in the background is a major theme in the film. “The movie really is not about video games,” he explains, “as much as it is about being a person in the world and how you choose to live.” 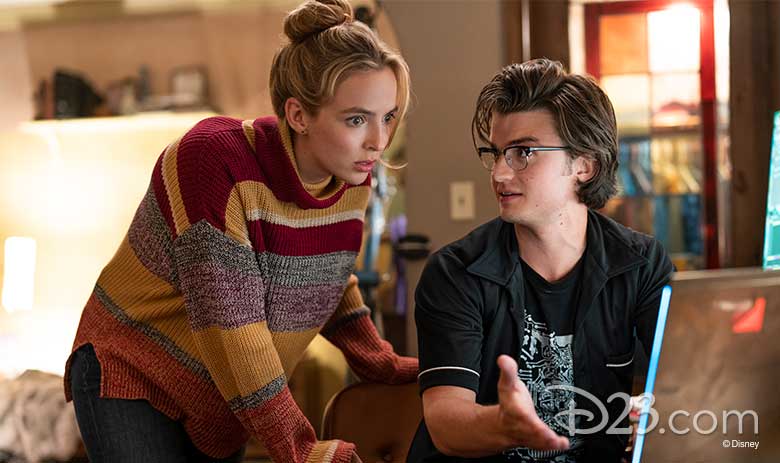 When we first meet Guy, he’s “as simple as they come,” says Reynolds. “He goes about his day and has the same six or seven things [happen]; he’s kind of on a loop with his world, and that’s about all he knows. He’s very childlike. But when he meets Milly, he really grows; he starts to change and evolve. And what happens afterwards is pretty astonishing.”

Guy quickly becomes a sensation in the gaming world… but Antoine (Taika Waititi), the head of video game developer Tsunami, sees his rising popularity as a problem. Reynolds’ wife, actress Blake Lively, was the one to suggest Waititi play Antoine after the trio had all worked together on a previous project. “Blake suggests Taika for everything. She’s like, ‘What about Taika for my husband? What about that?’” Reynolds says in jest. “He’s great.” 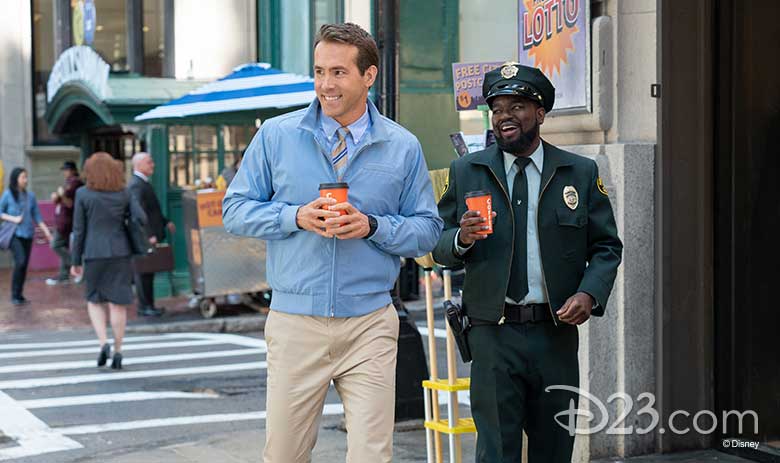 Levy gave the cast a long leash, encouraging them to improvise often. “I can’t wait to see the blooper reel of Taika,” says Keery, who holds his own against Waititi and co-star Utkarsh Ambudkar. “You don’t know how someone’s going to react when you put them in the ring with two comedy Jedi: Utkarsh and Taika,” says Levy. “Joe’s never been in the ring with major titans of improvisation. And Joe can flow with the best of them.” As for Waititi, Levy says with a laugh, “I’m currently editing the longest bonus featurette in the history of cinema and it is only Taika alt takes. His improvisations, riffs—it’s 19 versions of every joke!”

Free Guy is full of big ideas, both conceptual and thematic, and yet it manages to remain grounded. “I dare people to come away from this without feeling completely elated and wanting to skip out of the theater,” says Comer, who also portrays Molotov Girl, Milly’s avatar. “This film evokes so much emotion and it has so much heart right at the core of it.”

Or, as Keery puts it, “It’s the magic potion of three things—action, comedy, and heart—that I think are the perfect blend in this movie. It’s like if The Truman Show and Ready Player One had a baby and was raised by someone who loved Back to the Future a bunch.” 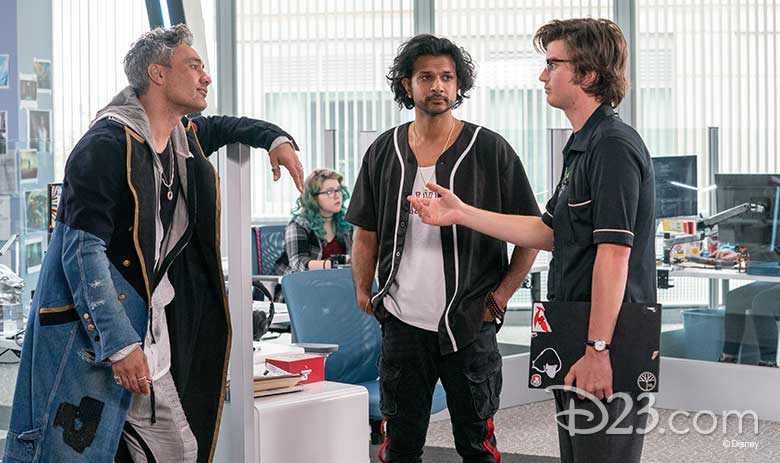 Lil Rel Howery, who plays Guy’s best friend, Buddy, has already watched the movie multiple times. “I still watch stuff as a fan, even though I’m in it,” the actor says. “It’s just such a blend of so many different genres in one movie and I think fans are going to love it.”

Free Guy offers something for everybody—from diehards to newbies—to enjoy. “I’m somebody who’s at the comic book shop every Wednesday to get my new books,” says Ambudkar, who plays Mouser. “I watch all of these kinds of movies. I’ve taken in basically all of the superhero pop culture you possibly can. I play Fortnite every night with friends across the world on headsets so we can stay connected. This movie was made for this nerd right here! As somebody who loves this stuff, I was tickled pink. And there are a lot of wonderful cameos from people within the gaming community, which is cool as well.” Keep an eye out for cameos from famous gamers including LazarBeam and Ninja, as well as other surprises. “I’ll say this: Easter eggs are very important to me. They’re very important to Shawn,” says Reynolds. “Easter eggs are detail, and detail is very important to us. The movie is riddled with Easter eggs everywhere. There’s little presents around every corner.” 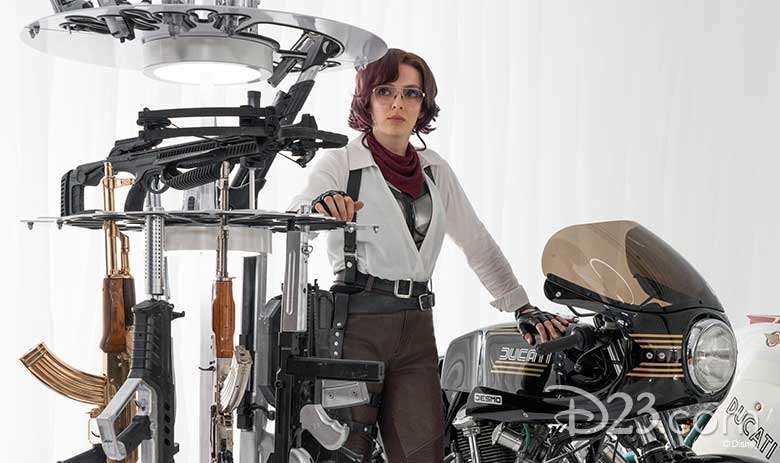 The fun audiences will see onscreen mirrors the fun the cast and crew had behind the scenes as they were making the movie in Boston. “It’s such a ridiculously dope cast,” says Howery. “I’m honored to be in a movie with all these guys.” Reynolds shares his co-star’s sentiment, adding, “This is the best moviemaking experience I’ve ever had, easily, but also the best movie I’ve ever done. It’s the most pertinent to our times in that sense. I feel like Deadpool was a movie that was pertinent to the comic book culture when it came out; this really, to me, speaks to a broader spectrum of where we are in the world—and not only that, but how we are in the world. I think that’s one of the reasons it’s my favorite movie.”

“This movie is just a fastball of joy,” adds Reynolds. “I feel like we’re missing some of that right now in our world and in our culture and in the entertainment we imbibe. This movie could not come along sooner for me, just as a movie watcher and someone who enjoys entertainment and culture. I’m really excited about that and I think it’s pretty damn timely.” 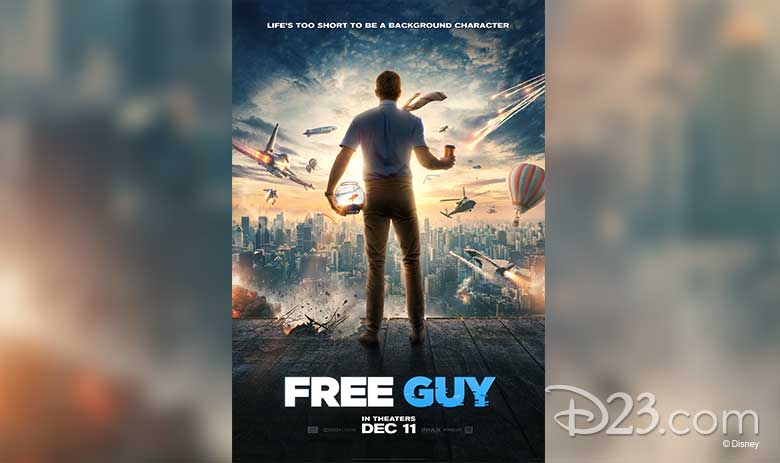