In the new series Grand Hotel, premiering tonight at 10 p.m. on ABC, scandals and secrets hide beneath the picture-perfect exterior of a family-owned hotel in Miami Beach. The magnetic Santiago Mendoza (Demián Bichir) owns the hotel, while his glamorous second wife, Gigi Mendoza (Roselyn Sánchez), and their adult children enjoy the spoils of success. The hotel’s staff round out a contemporary take on an upstairs/downstairs story—one where wealthy, beautiful guests lounge in luxury, unaware of the behind-the-scenes drama surrounding them.

Grand Hotel is an adaptation of a Spanish series that ran from 2011 to 2013. “I was obsessed with the original format,” says executive producer Eva Longoria. “It had all these amazing characters, and they dealt with a lot of great themes. It was a murder mystery, and I was like ‘This is so good! We’ve got to get the rights to this in English.’ Then, once we did, we went to ABC, and they said, ‘We love it. Just make it contemporary.’ We’re like, ‘Oh, OK… Where do we put it if it’s modern day?” And then we thought, ‘Miami! Let’s do that. It’s going to be fun!’ Miami itself is a character in the series. It’s beautiful, sexy and mysterious. It’s a total escape!” 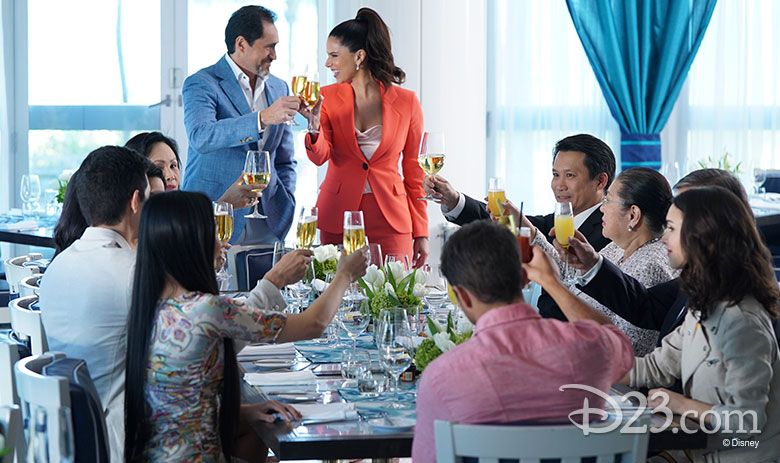 The primetime series also stars Denyse Tontz as Alicia Mendoza, Bryan Craig as Javi Mendoza, Wendy Raquel Robinson as Mrs. P, Lincoln Younes as Danny, Shalim Ortiz as Mateo, Anne Winters as Ingrid, Chris Warren as Jason, Feliz Ramirez as Carolina and Justina Adorno as Yoli. Brian Tanen, Ben Spector, Bill D’Elia, and Bob Daily also serve as executive producers, alongside Ramón Campos and Teresa Fernández-Valdés, who were executive producers of the Spanish series. “The original was a period drama,” Younes says, “but we’re very lucky because we had Ramón and Teresa, the original creators, along with Eva, Bill, Ben, Bob and Brian. They collaborated and created a whole new life for the show, the characters and the story. I think they did it justice.”

Longoria describes Grand Hotel as “dramatic, funny and juicy,” while Sánchez calls it “intriguing” and “mysterious.” Bichir hopes the show will help viewers “escape from reality,” saying, “This isn’t a story of one Latin family; this is a story of human beings in one microcosm.”

“The show doesn’t take itself too seriously,” Tontz adds, “which is important.”

Luckily, the cast and crew don’t take themselves too seriously, either. “It was a pretty weird setting filming the pilot, because it was spring break, it was Ultra Music Festival, it was at the Fontainebleau—and it’s Miami! So, we had a lot of things going on at the time,” Younes recalls. “We would wake up at 4 a.m. to go to set and there would be people still partying in the foyer!”

Adds Tontz, “That’s when I realized there is no hotel like a Miami hotel!”