Home / News / Headlines / Did You Spot These Details and Easter Eggs in The Book of ...

WARNING: THIS ARTICLE CONTAINS SPOILERS FOR ALL EPISODES OF THE BOOK OF BOBA FETT

The final chapter of The Book of Boba Fett made its Disney+ debut last week—but that doesn’t mean we need to leave the action-packed world of the series just yet. As The Book of Boba Fett follows Fett’s return to the sands of Tatooine, each episode hides familiar details, and Easter eggs abound for any Star Wars fan with a keen eye. During your rewatch of the series, here are some of our favorites for you to find: 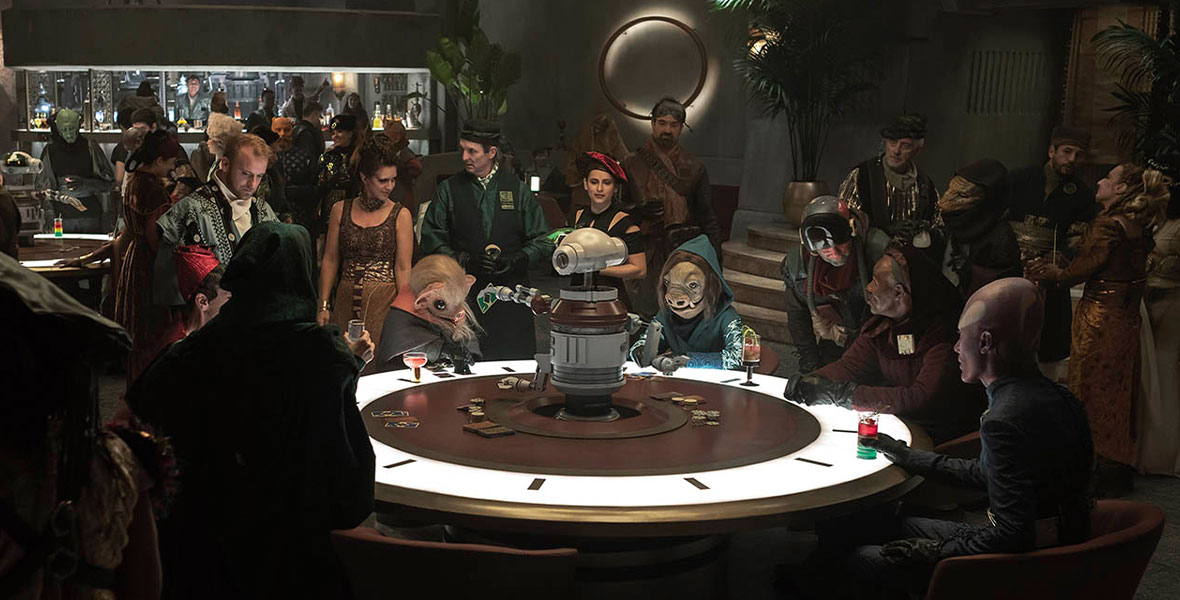 The Droids You’re Looking For
This is no Jedi mind trick! Throughout the series, sharp-eyed Star Wars fans could spot some familiar droids making cameo appearances. Keep an eye out for a card dealing RX-Series droid similar to our favorite DJ/Star Tours pilot at Sanctuary in Chapter 1, “Stranger in a Strange Land.” Also in Chapter 1, Boba Fett enlists the droid 8D8 as his translator—a much more innocent job than his previous gig, torturing droids in Jabba’s Palace during Star Wars: Return of the Jedi.

Chapter 5 gives us an update on another famous droid from the Star Wars original trilogy. R5-D4 first appeared in Star Wars: A New Hope, where he was almost sold to Uncle Owen and Luke Skywalker—until his motivator exploded and the fate of the galaxy was changed forever. Now, it seems that R5 has made his home in Peli Motto’s shop, where you can spot him rolling by, still with a hole in his head from his broken motivator. 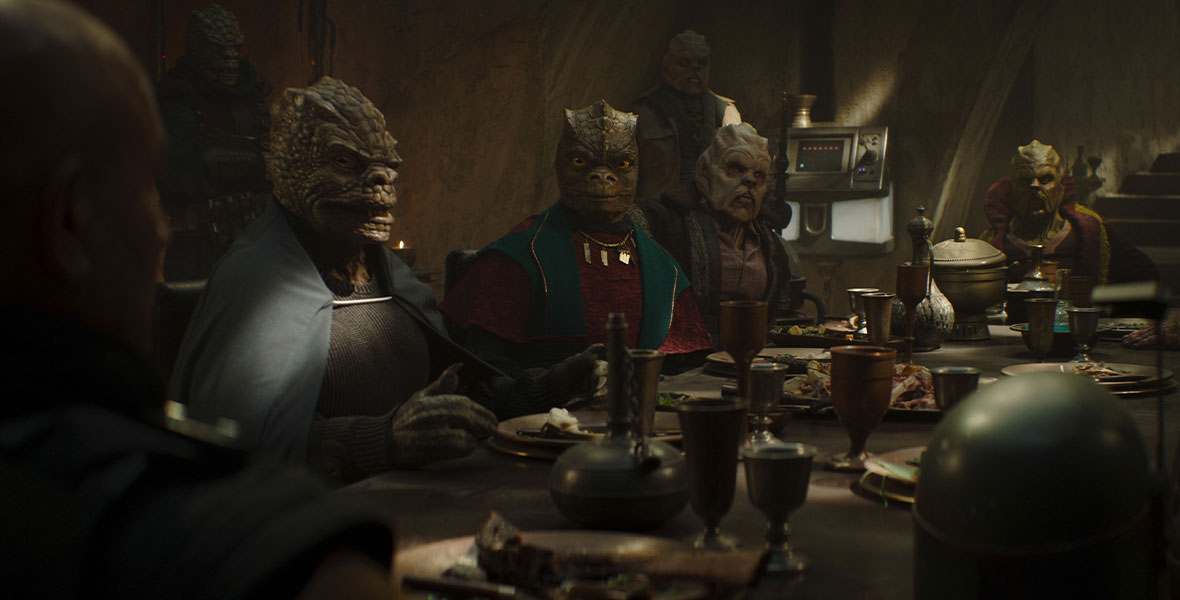 A Familiar Face with an Alien Appearance
Robert Rodriguez, executive producer and director of multiple Book of Boba Fett episodes, makes a cameo appearance in Chapter 1—although you might have a hard time spotting him, since he’s portraying an alien! As Dokk Strassi, Rodriguez takes on the role of the leader of the Trandoshan family who once worked for Jabba the Hutt. If you’ve got a sharp ear, you may also recognize him as the voice of Mok Shaiz, the Ithorian Mayor of Mos Espa.

The Coolest Musical Collaboration in the Galaxy
Star Wars fans around the world rejoiced when watching Chapter 1, where they discovered that fan-favorite character Max Rebo had survived the events of Star Wars: Return of the Jedi. For those of you unfamiliar with the blue, elephant-like musician, Rebo is the leader of the Max Rebo Band, Jabba the Hutt’s in-house ensemble who performed live music and won the hearts of Star Wars fans everywhere. Rebo is now working at Sanctuary, where he lays down tunes with a Bith musician who might have been part of another iconic Star Wars musical group. We first spotted a group of musical Biths in A New Hope, where the band Figrin D’an and the Modal Nodes performed perhaps the most iconic tune in the galaxy, called “Mad About You” in-universe and known to us earthlings as “Cantina Band.” At Sanctuary, Rebo and the Bith riff on that iconic tune, continuing to provide the best jams in all the galaxy.

How Rude!
The Star Wars franchise has provided us with a lot of creative insults (“scruffy-looking nerf herder” is a fan-favorite)—and, naturally, in a galaxy far, far away, not every insult is going to be one we understand. In Chapter 2, “The Tribes of Tatooine,” a captured assassin is asked for his last words and rudely says, “Echuta!” Well, at least we think he’s saying it rudely. We don’t really know what the word means, but the last time we heard it was in Star Wars: The Empire Strikes Back, when another protocol droid says the word to C-3PO, and he responds, “How rude!” Whatever the word means, we advise against using it—after all, the rude assassin got thrown into the Rancor pit! 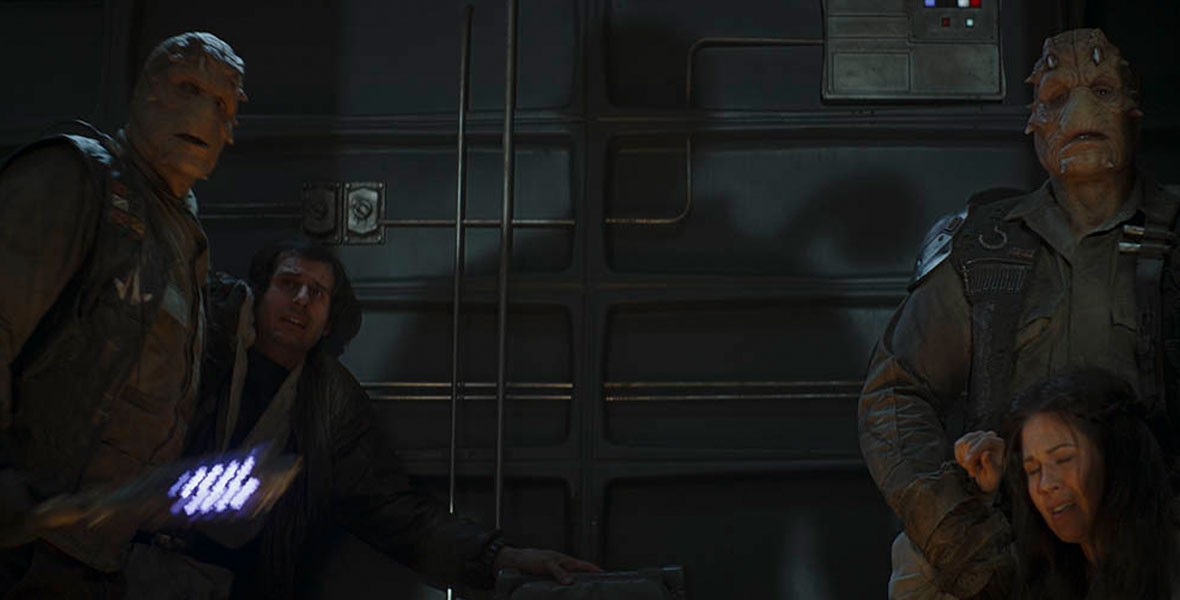 Okay, But Where Do We Get Those Power Converters?
In The Book of Boba Fett, we revisit many iconic Tatooine locations, from Jabba’s Palace to Beggar’s Canyon to… Tosche Station?! The location made famous by Luke Skywalker’s desire to go “to Tosche Station to pick up some power converters,” was never actually visited on-screen in Star Wars: A New Hope, so the first time we get to visit the station is in Chapter 2 of The Book of Boba Fett.

Savvy Star Wars fans might already know that we actually were supposed to see Tosche Station in A New Hope, thanks to a deleted scene where Luke goes to the station and visits his friends, Biggs Darklighter, Camie, and Fixer. While Darklighter did make it into the final edit of A New Hope, Camie and Fixer were left on the cutting room floor—until now, that is! You can spot them still hanging out in Tosche Station during Boba’s visit.

Return to Return of the Jedi
Those of us who spent a large amount of our childhoods watching Return of the Jedi may have spotted a familiar shot in Chapter 3, “The Streets of Mos Espa.” A nighttime shot outside of Jabba’s palace shows a Worrt using its toad-like tongue to catch and eat some local critters; an extremely similar shot appears in Return of the Jedi, during the setting of Tatooine’s twin suns.

That’s not the only shoutout to Return of the Jedi. During Chapter 3’s epic chase through Mos Espa, some workers with terrible timing carry a painting into the path of the fray. The soon-to-be-ripped-in-half painting is actually concept art of Jabba’s palace created for Return of the Jedi by legendary artist Ralph McQuarrie. Don’t worry—it wasn’t the original.

Just Like Beggars Canyon Back Home
Having spent his childhood on Tatooine, Luke Skywalker built the skills he needed to eventually take down the dreaded Death Star by shooting womp rats in Beggar’s Canyon. He is met with some apprehension when he explains his experience to his fellow Rebel Alliance pilots—but, of course, in Star Wars: A New Hope, he’s able to save the day thanks to his skills. As a shout-out to Luke’s experience bullseyeing womp rats, keep an eye out during Chapter 5 when the Mandalorian tests his ship in Beggar’s Canyon—you might spot one of those womp rats for yourself!

Watch The Book of Boba Fett on Disney+