Home / Headlines / Celebrate 10 Years of TRON: Legacy with a Look Back at the ...

To celebrate the 10th anniversary of TRON: Legacy, we’re sharing a story that originally appeared in a slightly different form in the winter 2010 edition of Disney twenty-three magazine and was modified for d23.com. Become a D23 Gold Member to enjoy more content like this in the quarterly publication. 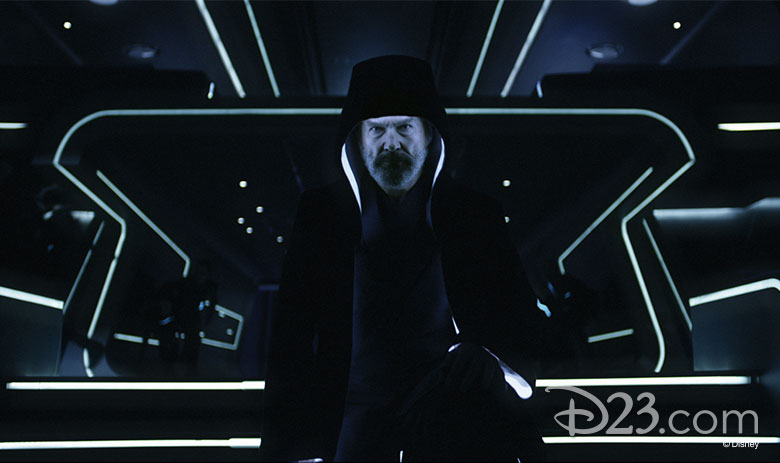 1982… In these early days of bits and data streams, young writer/director Steven Lisberger had a vision of how our burgeoning world of ever-increasing technology was on a collision course with our personal lives. This is how TRON was originally conceived, and it was Disney that embraced his vision. It was a revolutionary notion at that point in our society’s grasp of technology, often referred to in ensuing years as “ahead of its time.”

Fast forward to the end of the 1982 film, and with all things properly aligned in the lives of Flynn and Bradley, tales of the TRON universe were content to lay dormant for nearly three decades. As we began to comprehend the influence of the digital sphere on our own lives, the game grid adventures of Flynn and Tron slowly became less abstract. Steven has a stable theory as to why a TRON sequel would take so many years to develop into reality: “The reason it took the 25 to 28 years is because we needed the 10-year-olds to grow up and be powerful enough to make this movie, so that they could take their 10-year-old sons.” Although TRON was never forgotten, the arcade generation that was most influenced by the original simply needed to grow up.

Enter the age of TRON: Legacy. 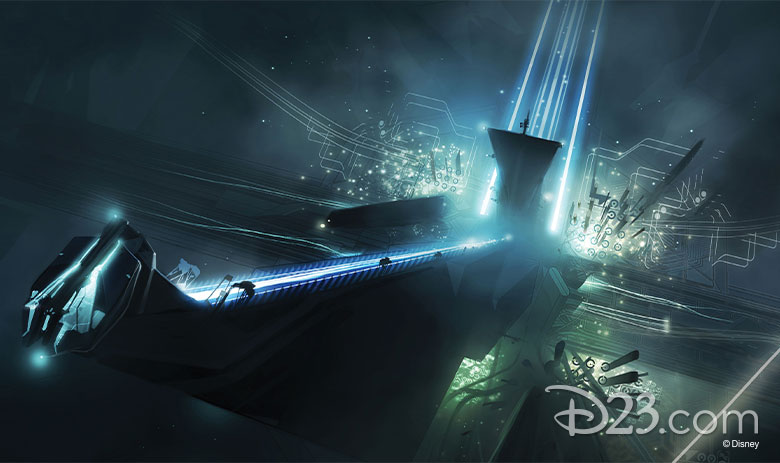 Fans from the start
“I saw the [original] movie with my dad when I was 12 years old,” recalls TRON: Legacy producer Sean Bailey. “That was my first take of high concept. I had never seen a movie screen that had looked like that before. I have an emotional history with TRON, and a reverence for the title.” With Sean working alongside co-producer Justin Springer and production executive Brigham Taylor as the initial creative team, Adam Horowitz and Eddy Kitsis joined the team as the writing pair to add new life to this elaborate digital canvas. When they were initially approached by Brigham in 2007 regarding their ability to write a treatment for a TRON sequel, Eddy was elated. “I just couldn’t believe they asked!” he says.

They jumped right in. Each has vivid memories of having been dropped off at the mall to see TRON in its original release, and both have been influenced by its brave approach to story, technology, and of course, visuals. This childhood favorite had a storyline for which they both felt a personal understanding, and they couldn’t wait to develop it further. 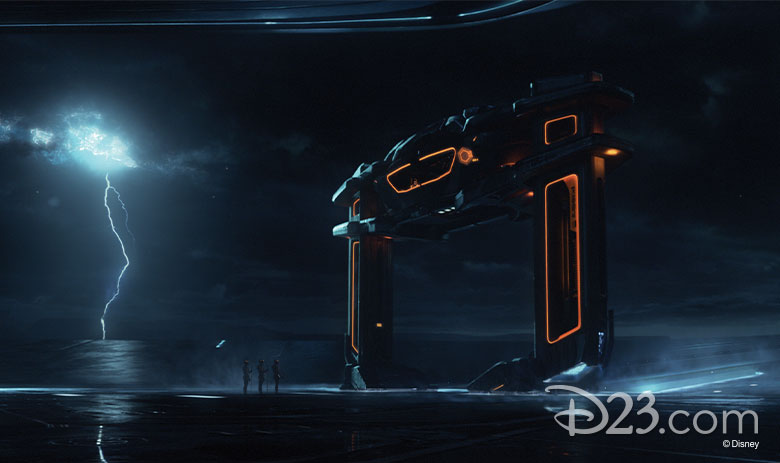 The Time for TRON to Continue
Although the new team was motivated and in place, there was still doubt regarding whether or not the timing was right for Disney to return TRON to today’s pop culture vernacular, so the team determined that a short visual effects test could be secretly produced, and subsequently rolled out at the 2008 Comic-Con International in San Diego, California. Pleading their case for absolute secrecy on the matter, Sean remarked, “We have the opportunity here to surprise a crowd that is un-surprise-able.”

This nearly three-minute test became a true Comic-Con “Easter egg” to be discovered. It would be covertly attached to the end of an existing Disney panel in front of nearly 6,500 unsuspecting spectators. As the panel completed its presentation, several in attendance began to disperse to their next scheduled event. The moderator stood back at the microphone and coyly announced that there was a surprise. As the Walt Disney Pictures logo appeared on the big screen, and then morphed into a digitally rendered visage of that same castle, the audience went silent… with bated breath. New, yet strangely familiar images began to fill the screen. Game warriors? Light cycles? The trailer depicted a dark and foreboding computer world, not at all like the bright and peaceful “free-system” our heroes fought to liberate at the end of TRON, where an exciting light-cycle chase sequence ensues. The payoff was the reveal of a young Jeff Bridges who, we discover, is the aggressor in the light-cycle chase, who “de-reses” (eliminates) the light-cycle rider he’s pursuing. This is a character trait we didn’t see Jeff portray in the first film. A new attitude and vibe toward the TRON story were clearly present.

Audience reactions began to break the silence in recognition, but nothing matched the unbridled enthusiasm of seeing a matured Jeff Bridges appear on screen as Flynn. The conclusion was met with deafening applause. The visual effects test was an enormous success. Joseph adds, “There was a lot of internal excitement, and the Comic-Con excitement was the push to get it a full green light.” Now, it was time to get to work. 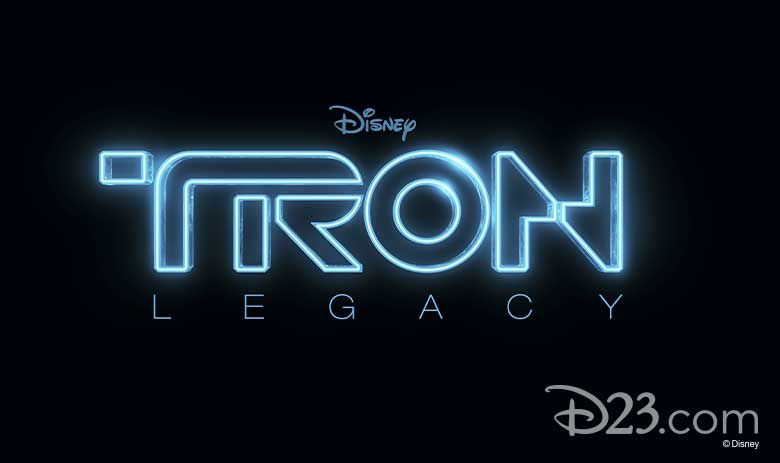 Lighting up a Legacy
The highly sophisticated technical costuming on TRON: Legacy held all of those involved with entranced fascination. Director Joseph Kosinski remarks, “In this film, I really wanted the suits to physically illuminate the characters. Each other. The set.” The costumes in TRON: Legacy could light up on their own with practical lighting built into each one. A full cast of characters emitting streams of light all at once created a unique visual like no one had ever experienced. The actors would wait with a child-like anticipation on a dimly lit set for those magic words, “Light ’em up!”

“The illuminated suits were something we developed for this movie, and they ended up driving how we lit the whole film,” Joseph continues. “The suit lamps look brilliant in a dark room; they don’t look great in a bright room so the lighting of all of our sets had to be dimmed down to a really low level. That came out of my desire to make everything in this film as physical and real as possible. For the actors, it makes a difference to be on a real set, and it makes a difference to be in a suit and watch it illuminate on your body. I think it pays off in the performances and the overall look of the movie.” 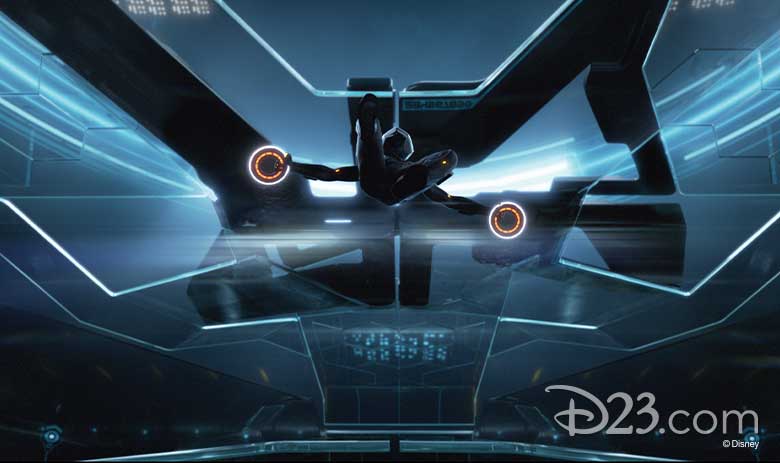 Creating Clu
Helping to fully realize the cast was the timeless Jeff Bridges. He wasn’t just returning to his role as the older and wiser Kevin Flynn, who has been a prisoner of the computer grid for two decades, but also as his ageless digital avatar, Clu, who rules that realm. By portraying both roles with separate thought, emotion, and motivation, and through the wonders of modern filmmaking techniques, it is convincingly easy to believe that Bridges does in fact have his younger counterpart to perform against. The results of this talented one-man duality is an amazing artistic marvel to behold, as Kevin continues to impart wisdom upon an irrational Clu that only believes in perfection.

“I don’t see this movie happening without Jeff,” Joseph admits. “He was the first key in getting this going.” The impressive nature of how Kevin Flynn has evolved during the last 28 years is multifaceted. Not only is the importance of this father–son story literal in the biological relationship of Kevin and Sam in the real world, it takes on an undeniable poignancy between Kevin and Clu within the digital world.

Thanks to Rob Klein for his contributions to this article.