Welcome back to the second and final part of our look at the construction of Cinderella Castle. These photos, selected from the Walt Disney Archives Photo Library, are only a taste of the thousands of vintage Walt Disney World images that reside in the collection. In case you missed Part One, please visit this link. 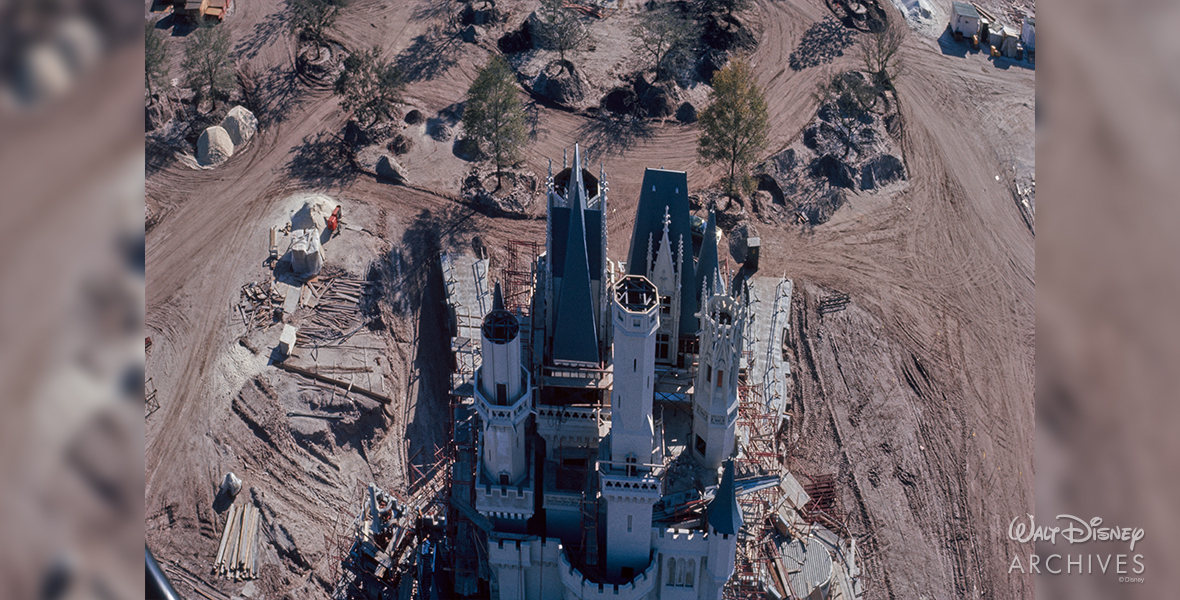 A unique aerial view of Cinderella Castle under construction, taken from above and behind the Castle. The newly planted trees of the Central Plaza are visible at the top of the photo. 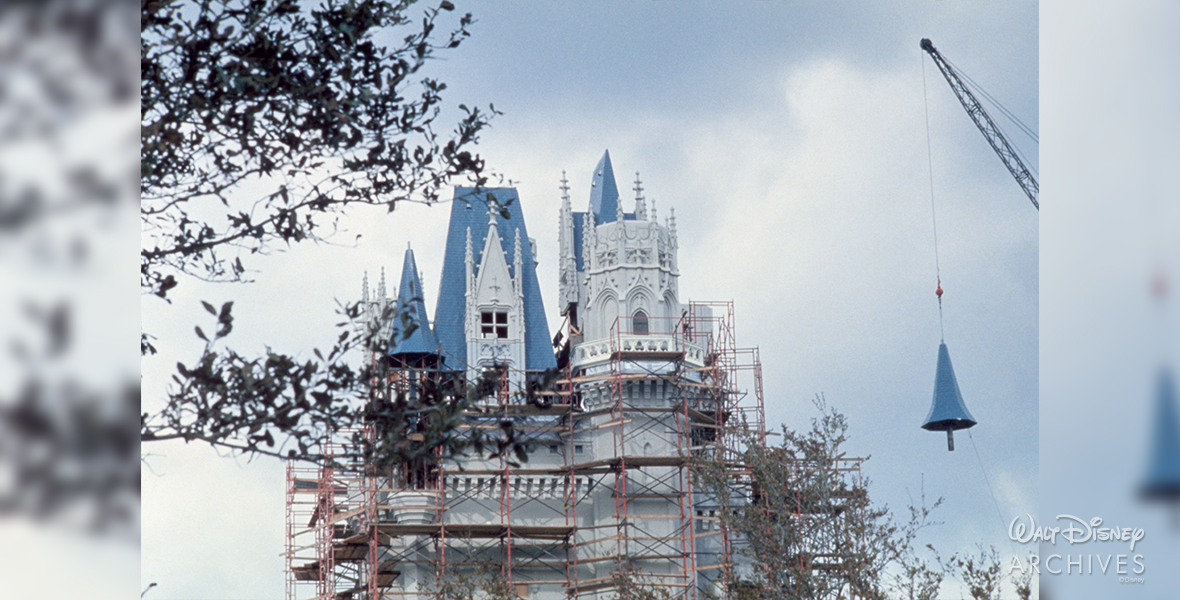 A crane lifts the roof portion of a tower into place. 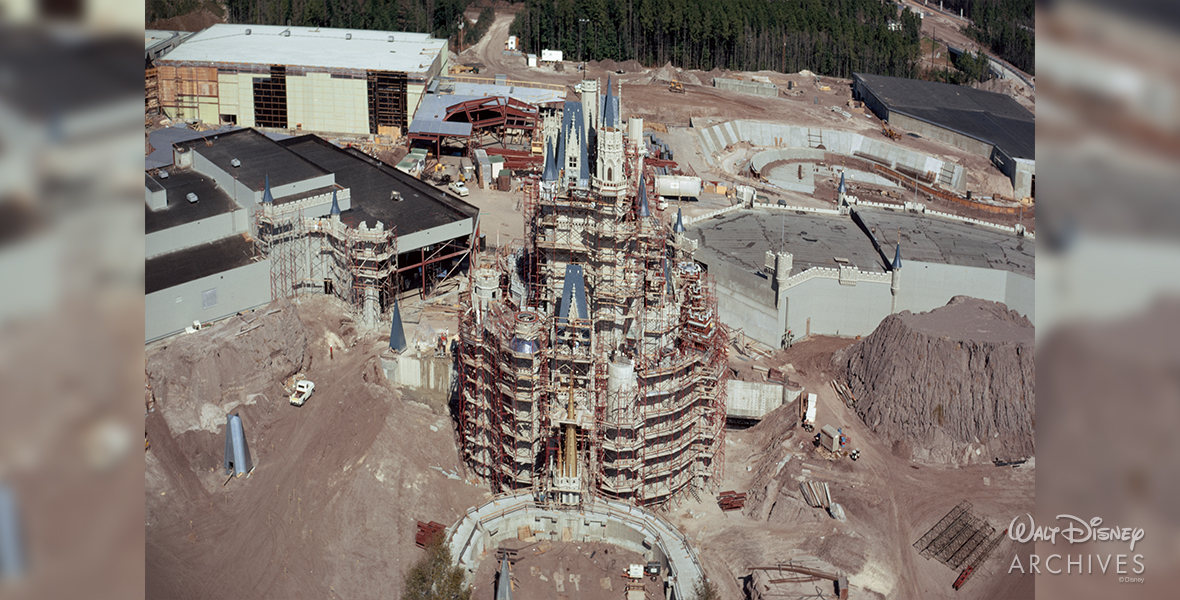 There’s much to see in this aerial shot of the Castle and nearby Fantasyland. Notice the Castle’s golden spire has been staged at the top of the ramps before its eventual placement at the top of the structure. To the left of the castle are the buildings for both it’s a small world (green structure) and “Mickey Mouse Revue,” while the steel structure of the Pinocchio Village Haus takes shape next to it’s a small world. In the top right corner is construction on the lagoon and infrastructure for the 20,000 Leagues Under the Sea submarine voyage, while the Snow White’s Adventures and Mr. Toad’s Wild Ride buildings sit just below it. 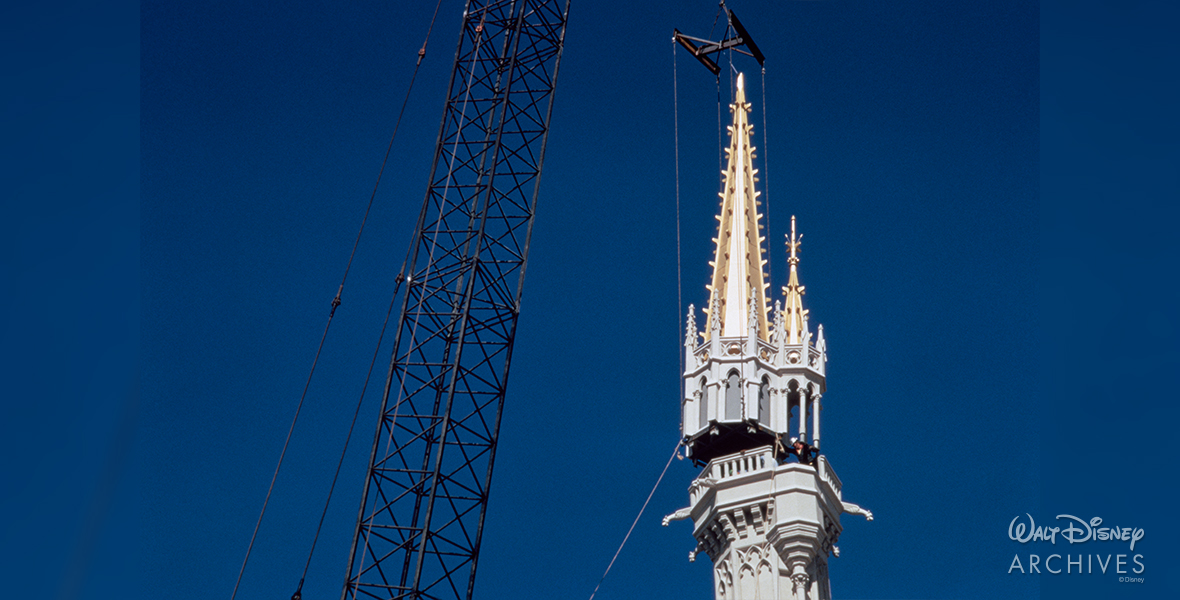 The top portion of Cinderella Castle’s tallest spire is lowered into place as a construction worker in the turret helps to ensure the proper connections are made. 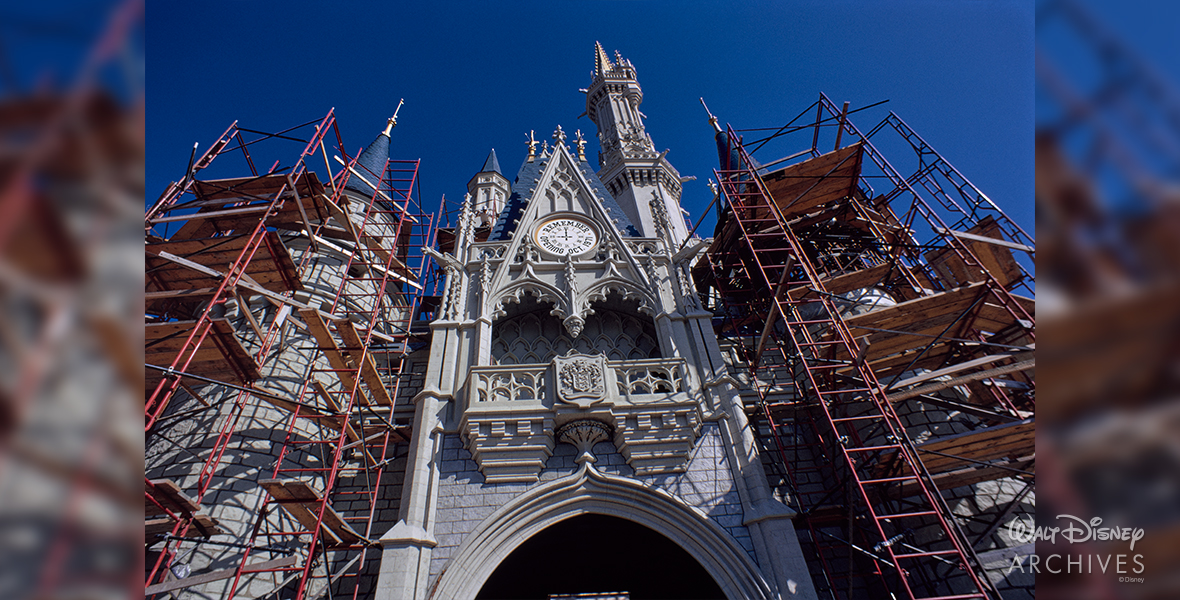 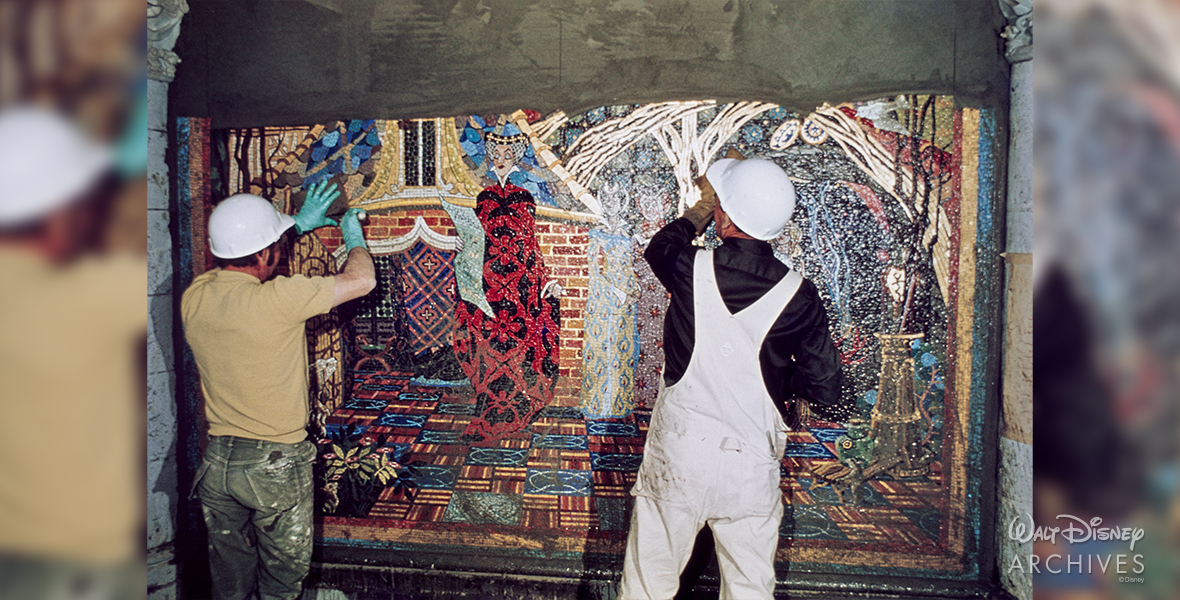 Inside the Castle foyer, the story of Cinderella is depicted along the walls via five dazzling mosaic murals, with each panel in the shape of a Gothic arch 15 feet high by 10 feet wide. This photo shows tile setters cementing the glass pieces into place. The murals were designed by Disney Legend and Walt Disney Imagineer Dorothea Redmond and translated into hundreds of thousands of pieces of glass by a renowned tile mosaicist. More than 400 colors were used, with 100 accent colors, and some of the glass pieces were infused with silver and 14-carat gold. According to a Disney press release at the time, “Some pieces are as small as the head of a tack and many more are hand cut and shaped by a power grindstone.” 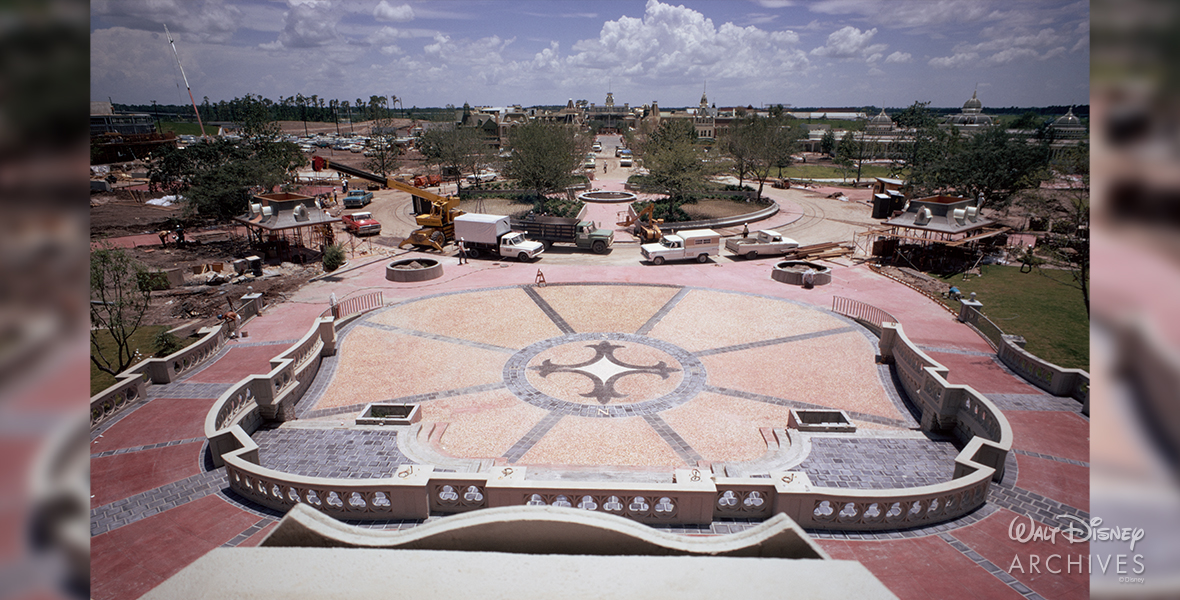 A rarely seen view from the balcony of Cinderella Castle overlooking the forecourt area and across the Central Plaza toward Main Street, U.S.A. 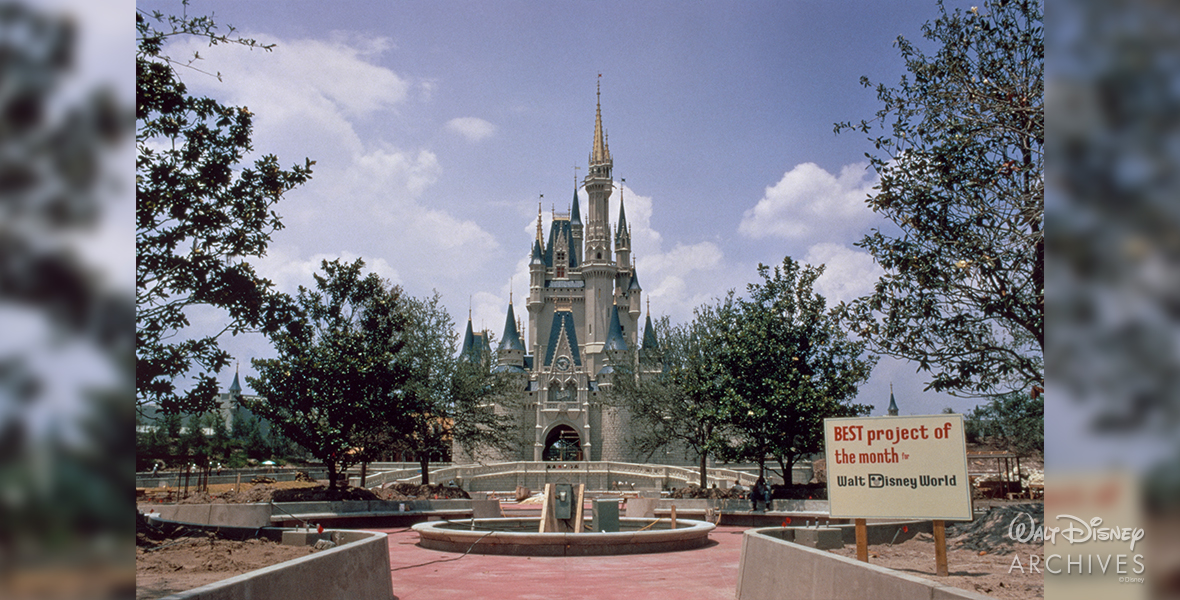 An almost-ready Cinderella Castle as viewed from Central Plaza at the end of Main Street, U.S.A. The iconic “Partners” statue of Walt Disney and Mickey Mouse was placed in the planter at the center of this photo in June 1995. 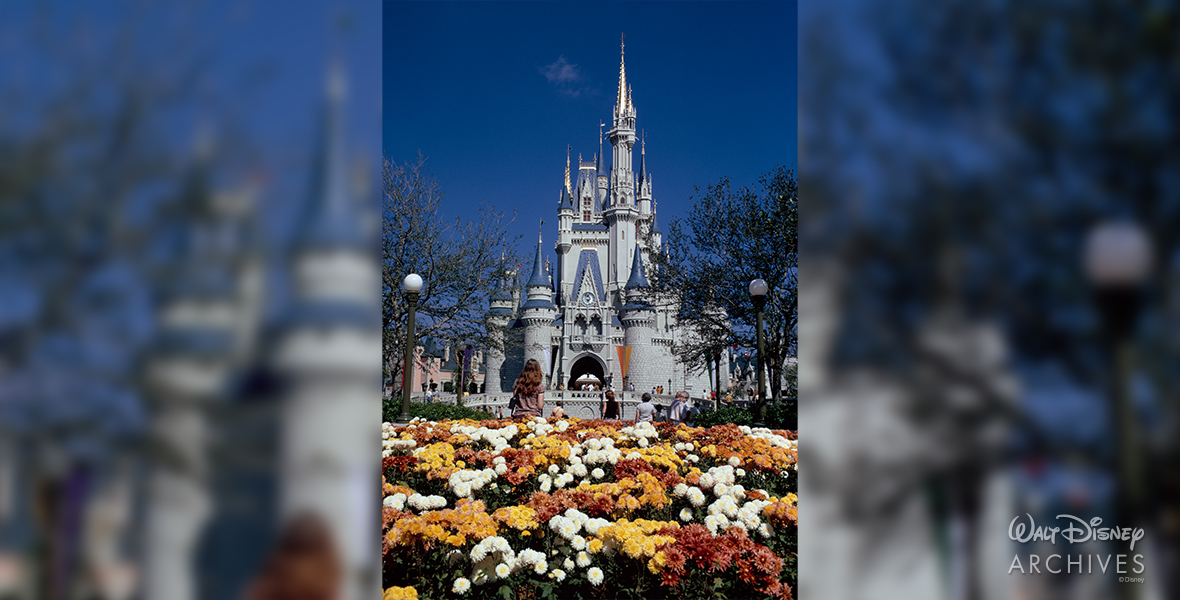 A Fall 1971 view of the completed Cinderella Castle.