Home / Headlines / Mickey: The Story of a Mouse Draws a Vivid Portrait of an Icon on ...

The story of Mickey Mouse is the story of America, from his music-infused birth at the tail end of the Jazz Age, in 1928, through the struggles of the Great Depression and World War II, all the way up to the high tech of the 21st century. The new Disney+ Original documentary Mickey: The Story of a Mouse, debuting on Friday, November 18, traces how the beloved icon has been adapted and adopted by one generation after another, across time and across the globe. “I was raised on Mickey in the ’80s,” recalls the film’s director, Jeff Malmberg—a decade when many kids saw the mouse chiefly as a park greeter, plush toy, and corporate icon. “And that’s very different than if you’re raised watching him in a movie theater.”

Mickey: The Story of a Mouse brings together all the eras and incarnations of Mickey during more than 90 years, assessing what, exactly, gives this mouse such durability and magnetism—while also filling in what younger generations may not know about the Mickey of their forebears. The youth of 2022, for example, may not realize that Mickey was once a movie star as big as Harrison Ford or Emma Stone. In fact, says longtime Disney animator Eric Goldberg, “A lot of people today don’t really regard him as a character—or not as a particularly funny character. And I think he’s all those things. Mickey has tons of personality. He has his own playful, resourceful, fun way of looking at things and doing things… There has to be a reason that he’s lasted to this day. And I think it’s his indomitable spirit and that pure joy of movement that he has.”

Movement is key to Goldberg’s major contribution to the documentary: a brand-new, hand-drawn short titled “Mickey in a Minute,” in which some Disney magic pulls our hero into a whirlwind that spins him into scene after scene from his own past, revisiting some of his most iconic roles, such as “Brave Little Tailor” (1938) and “The Sorcerer’s Apprentice” from Fantasia (1940). The kinetic and comic cartoon finally lands Mickey where he began, whistling at the wheel of a steamboat. 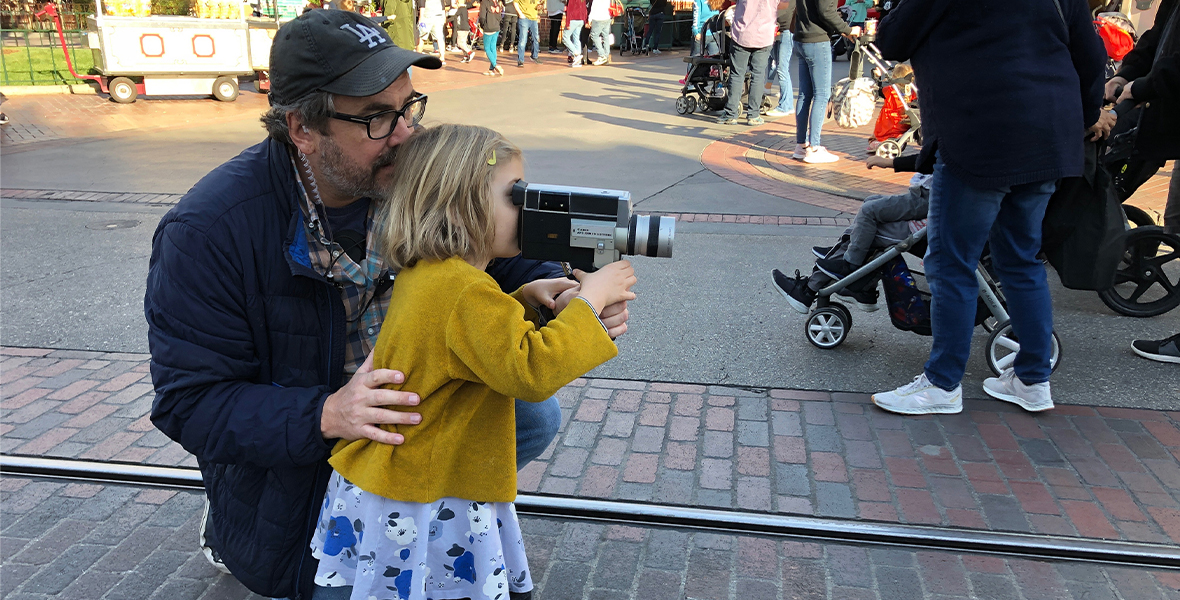 This dazzling and delightful short—which will have Disney+ viewers reaching for the remote to rewind and rewatch—is the finale of the larger 93-minute whirlwind that is the full documentary. Somehow Malmberg and his producers—Meghan Walsh, Chris Shellen, and Morgan Neville—have squeezed in the full scope of Mickey’s life (so far) as well as discussions of his cultural impact and importance, testimonials from a wide diversity of adorable fans, a fascinating tutorial on the art of animation, and much more. Mickey’s enduring appeal, as the film asserts, is partly geometric. “He’s a very simple character for people [to recognize],” Walsh says. “Three circles. That makes it easy. And he’s been around for a long enough time that people now can take him and turn him into what they would like… From the ’60s onward, people have been co-opting Mickey for their own artistic and political purposes, and I think that’s really unique and interesting. It’s what art does for the human spirit—we take art and we figure out ways to make meaning out of it for ourselves. And the great thing about Mickey, because he is so simple, is people can do that in a million different ways.”

“He’s just as relevant today as he was when I read Mickey Comics when I was a kid,” says animator, author, and Disney Legend Floyd Norman, who joined what was then called Walt Disney Productions as an animation in-betweener in 1957, soon became a lead animator, and is an interview subject in the documentary. “Mickey Mouse, he started as this simple character,” Norman says in the film. “But over time he gets so big, he becomes this reflection of who we are—the good and the bad. How is that even possible with this little mouse?”

To find out, the filmmakers talk with artists, cultural historians, and collectors for whom Mickey is a consuming passion, as well as share footage of some of the mouse’s most famous admirers, such as author Maurice Sendak and artist Andy Warhol. “I think the takeaway from the documentary is that everybody knows this character and loves this character,” Goldberg says. “He usually represents something that they really enjoyed growing up and can still be enjoyed.” 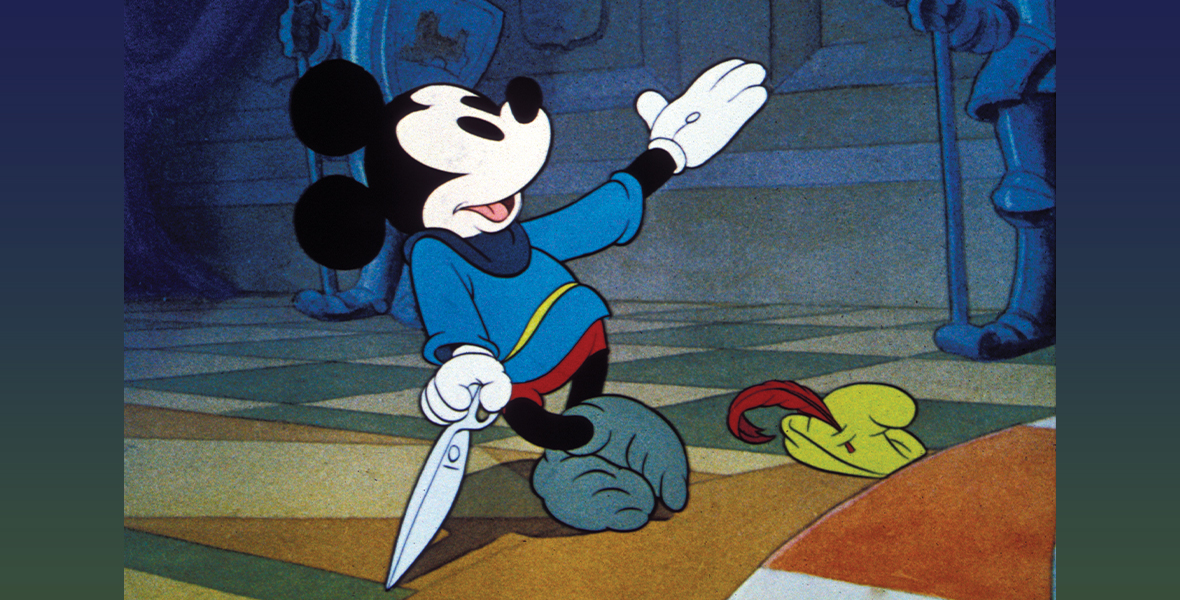 Along the way, viewers also get a compact biography of Mickey’s alter ego, Walt Disney, from his boyhood in Marceline, Missouri, to his role as Mickey Mouse’s creator, protector, and onscreen voice. “Walt was Mickey and Mickey was Walt,” Goldberg says. “They were inseparable.”

Even more than half a century after Walt Disney’s passing, the film makes clear, Mickey provides a living conduit to his creator. “Walt identifies with Mickey, and we all connect with Walt in that very special way through Mickey Mouse,” Norman says. “So, it is a unique relationship and, I think, something that’s very, very special.”

Goldberg adds, “If you want a key to how Walt looked at life, you don’t have to go much further than watching some classic Mickey cartoons.”

Mickey: The Story of a Mouse is chock-a-block with clips from Mickey’s filmography—his best-known parts, of course, but also less-familiar roles. (A 1955 television commercial, for example, features an angular Mickey and Minnie Mouse driving a Nash Rambler—with their two little mouse children in the backseat!) There are even glimpses of contraband Mickey, such as when he was illicitly co-opted for an antiwar cartoon in the 1960s.

One important observation the film makes, Walsh says, is that the phenomenon that is Mickey Mouse has been developed and expanded by a long and ever-growing roster of skilled and enthusiastic contributors. “It’s not just Walt Disney,” she explains. “It’s people like Floyd Norman, like Eric Goldberg. It’s the women of the [Disney] Ink and Paint Department in the 1930s, ’40s, and ’50s. There are a lot of people that have contributed and built this character into what we know today.” 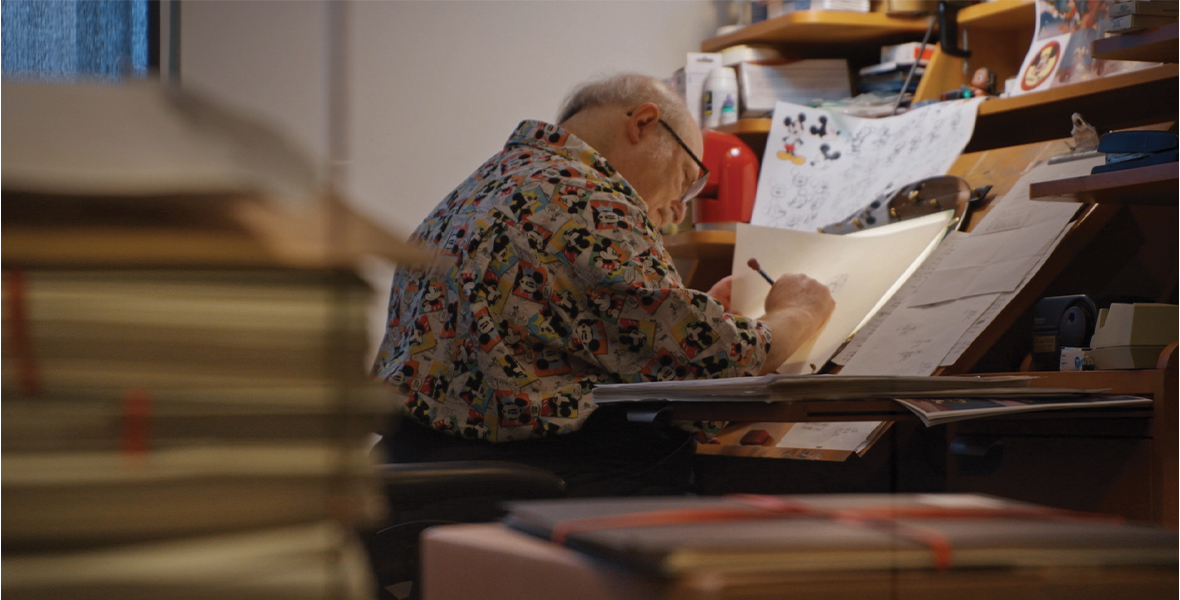 It’s a living legacy, as the very existence of the animated short “Mickey in a Minute” within Mickey: The Story of a Mouse makes clear. Watching Goldberg and his fellow veteran animators Mark Henn and Randy Haycock at work on some of the estimated 1,500 drawings it took to make the cartoon is both an inspiring glimpse of current artists at work and a living demonstration of the pencil-and-paper origins of Mickey Mouse. Goldberg and the creative team did hundreds of hours of research for the one-minute short, guaranteeing that each incarnation of the character was accurate to its origins, right down to the width of each line and the presence of particular shadows. “I wanted to make sure, first of all, that the animation and the characters looked and moved like they did in those iconic pieces,” Goldberg says.

“We animated it on paper,” he continues. “We cleaned it up on paper; we in-betweened it on paper. It was inked-and-painted digitally, [but] we were replicating what that looked like in terms of [traditional animation] cels.” The resulting short, like Mickey Mouse himself—and the documentary that tells his story—is “absolutely authentic,” Goldberg says. “One hundred percent traditional.”

Watch Mickey: The Story of a Mouse beginning November 18, exclusively on Disney+.