Ever wondered what happens after “happily ever after?” In just a few days’ time, we’ll get a magical, tune-filled answer when Disney’s Disenchanted debuts exclusively on Disney+.

It’s been more than 10 years since the events of the beloved, fan favorite film Enchanted. Now, Giselle (Amy Adams) and Robert (Disney Legend Patrick Dempsey) are happily married, but Giselle has grown a bit disillusioned with the city, so they move their growing family to the sleepy suburban community of Monroeville in search of a more fairy tale life. Unfortunately, it isn’t the quick fix she had hoped for. Suburbia has a whole new set of rules—as well as a local queen bee, Malvina Monroe (Maya Rudolph), who makes Giselle feel more out of place than ever. Frustrated that her happily ever after hasn’t been so easy to find, she turns to the magic of Andalasia for help, accidentally transforming the entire town into a real-life fairy tale and placing her loved ones’ future happiness in jeopardy. This puts Giselle in a race against time to reverse the spell and determine what happily ever after truly means to her and her family. 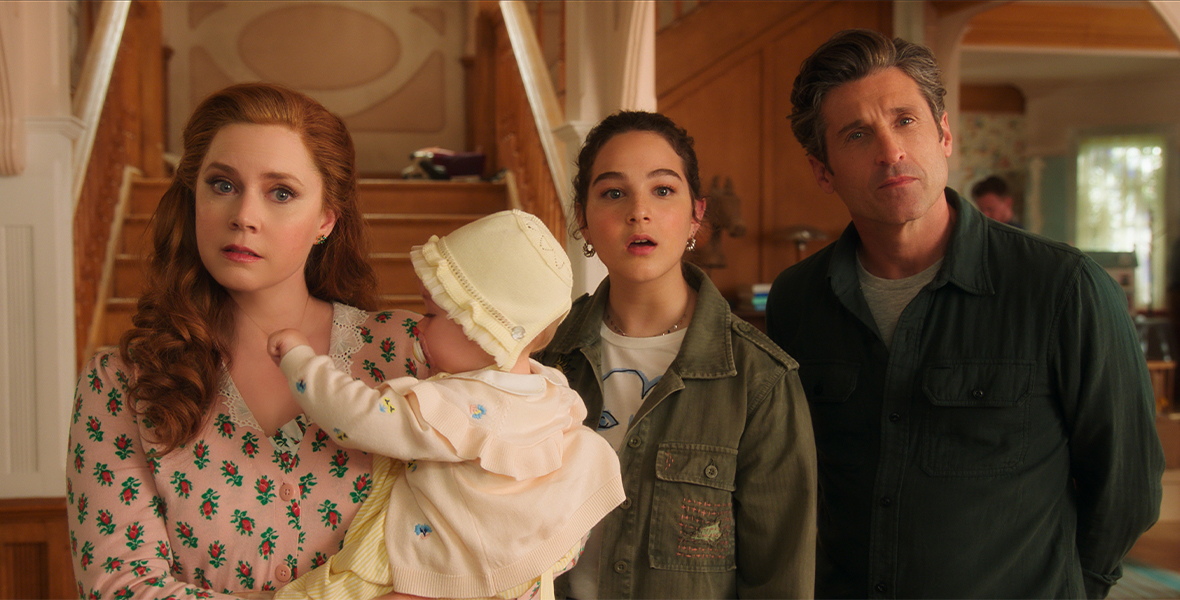 Adams on returning to Andalasia:

“We were looking at where Giselle would be now,” Adams, who also produced the movie, explained. “When we leave her in Enchanted, there’s been an evolution from the beginning of the movie to who Giselle is at the end of the movie. So, this film is taking that evolution of who she might be after spending 10 years [away]—but also making sure we keep her grounded and true to her feelings, without losing that joy, and that naivete and innocence and purity that makes Giselle so special. That’s where my launching place was—taking everything that I loved about Giselle in the first movie, and then getting this opportunity to spin it throughout. It was really just such a pleasure.”

“Amy really was our starting point of wanting to play Giselle again,” he said. “It was just such a joy to see the script come together and become something really joyous, a musical with comedy but with the right amount of drama, all pivoting around, what is Giselle’s new ‘character?’ What is her dilemma? How do we progress from the original movie and yet make something that was definitively a new movie, a fresh new start for her character and the other characters that everybody loved from the first film?’ And I can’t think of anybody’s stewardship that it was better to develop with than Adam, because he really understood what the music elements needed to be and how all the characters needed to grow.”

Rudolph on the “dream come true” of working on a movie musical with Broadway and Hollywood icons:

“We all had fun; we really did,” the actress admitted. “Even though I’ve had a chance to sing in things before, it was nothing like this experience. And knowing that I was going to get to sing this Menken and [Stephen] Schwartz song was really, truly like a ‘life fulfillment’ [thing—like I’d been training for the marathon my whole life! And that’s what it was every day. We’d go to vocal rehearsal and we’d go to dance rehearsal, and we were working towards the day where we shot the song. And then we shot it, and it was amazing! Truly, I’m not worthy. Such a dream come true. There are no words for stuff like that… This was little Maya’s dream of what it’s like to be in a musical.” 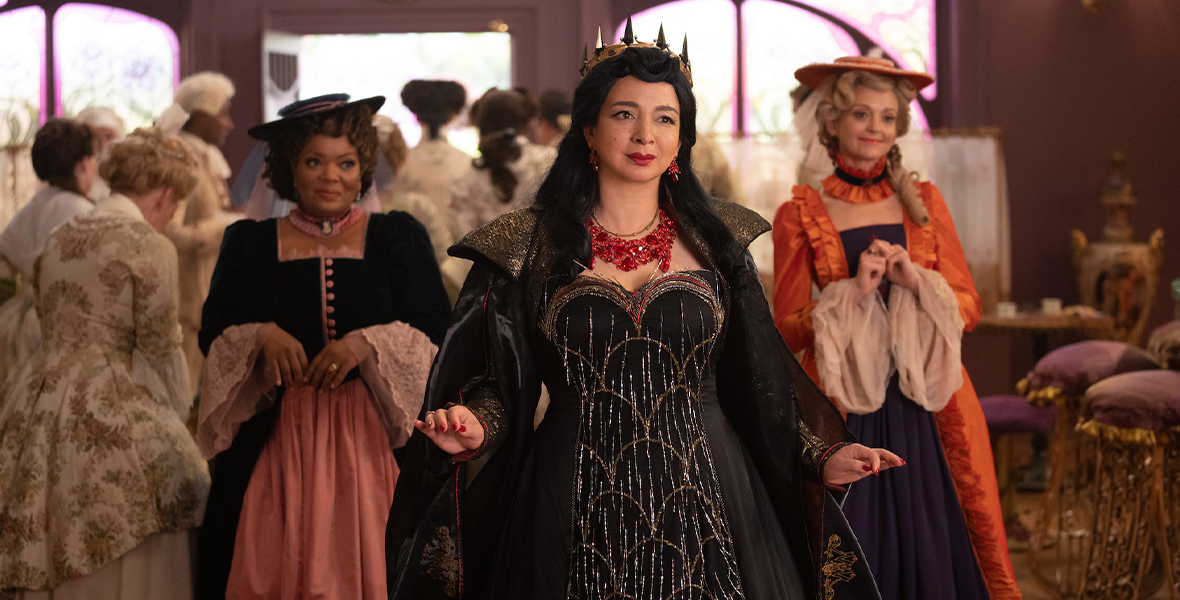 Brown on how the cast of Disenchanted helped her through a particularly challenging time:

As the friend of D23 explained, “I want to say, since you’re all here, people know that I lost my mom while we made this film. And I want to take a moment to thank everyone that I’m looking at, [as well as] our entire crew. Maya swooped me up and took me to her house and kept me for a weekend. Jayma was like my touchstone. And Adam took me to a… what was it? The little fair they had [near the filming location in Ireland] every Sunday. I got calls from Patrick. Everyone enveloped me in love. I don’t have any sadness about my time with you, at the hardest time of my life, because that was the love of this film. So, I wanted to make sure I thanked you all again, and I’m so happy that our love letter is about to be out in the world. And I know my mother would want to thank you all, too, for taking care of her baby.”

Menzel on the shifts her character Nancy makes this time ‘round:

“Mine was a pretty drastic change [in the first film],” she admitted, chuckling. “I go from this cynical New York chick who jumps down a portal—or a manhole—and then I come out [entirely different].” (Shankman interrupted at this point, adding, “That’s not even the movie, that’s just her life!”—much to the assembled group’s delight.) Menzel continued, “It was so much fun, but the challenge was figuring out the balance; Adam and I would talk, and I’d say, ‘How much of my New York accent do I still have, coming back from Andalasia? And how much has this idyllic, romantic, beautiful, perfect place rubbed off on me?’ And then putting on the corset and all that—it was an easy journey for me.”

Mays, Nunez, and Baldacchino on being “newbies” in the cast:

“I was so excited to join this cast,” Mays said. “I was a huge, huge fan of the first film. So, when I got this job, I was like, ‘Great, I can retire now. I did it!’ And it was a dream. We had so much fun.” Nunez concurred, remembering one scene in particular: “I got to do a scene with Maya and Amy—Maya, who I’ve wanted to work with forever, and Amy was on The Office 35 years ago,” he kidded, laughing. “In between, while we were waiting to shoot, Amy—I don’t know if you remember this, but you would sing, always. We were so happy, just hanging out, and you wouldn’t stop singing with a big smile on your face. There was a lot of love there.”

“When I was little and even growing up, Enchanted was my favorite movie,” added Baldacchino, “so being able to join all these people was surreal to me. And I’m so, so grateful to sing music written by Alan Menken and Schwartz; I grew up performing, I love musical theater and singing—so that wasn’t new for me—but to get to originate something that they wrote is an honor.” 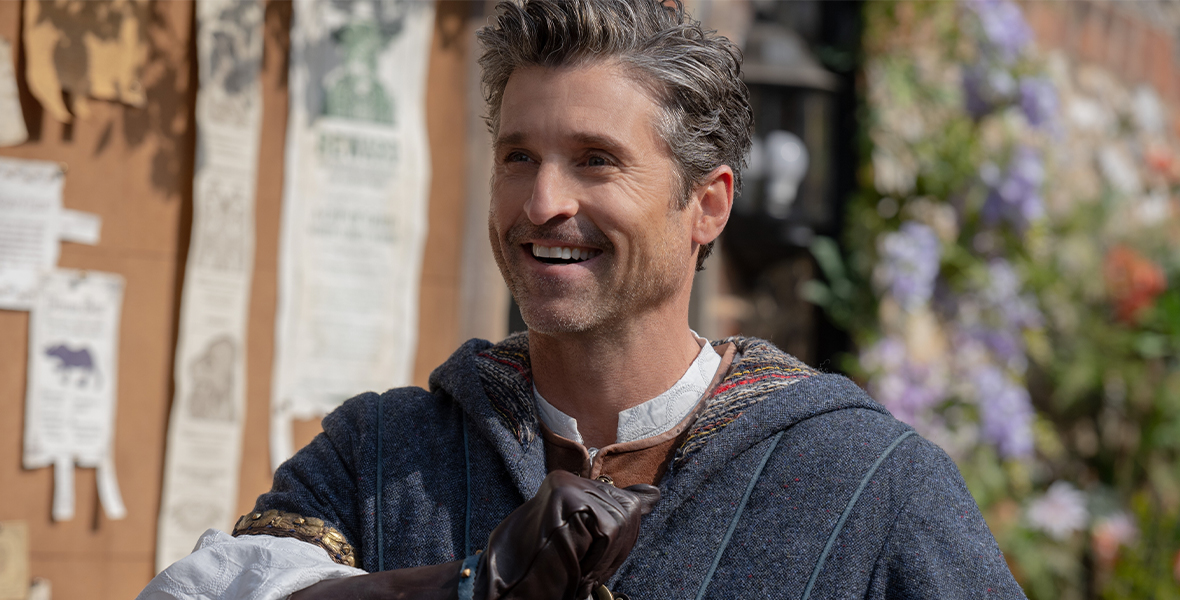 Dempsey on catching back up with Robert, and what movie musicals have taught him:

“At the very beginning, Robert is very much the same,” the actor explained, “although he is kind of trying to balance life with his new baby—and with his older child, and the conflict [there] between the stepmother, and that dynamic. But then getting into the larger-than-life stuff was completely freeing and really fun. For me, it was a fantastic ride. I had a great time, where I could do some sight-seeing in Ireland and work on the musical. And that whole process of finding your voice—working with the [vocal] coach on that—learning the lyrics and the choreography was an extraordinary experience, and something I’d never done before. I really appreciate the talent, the voices—the singing that Idina and Amy and Maya and everyone [does]. It’s an extraordinary feeling you get when you sing; the vibration—there’s something very intoxicating about it. So, it was nice to get a taste of that.”

Menken on working with Schwartz again to set Giselle and company’s world to music:

“Rather than write for any individual actors,” he explained, “Stephen and I—in the case of this musical—write for the characters and the storyline and take it from there. It just so happens that the actors are perfect for this. In terms of ‘where to start,’ in a way you start from the first Enchanted, which had the most amazing premise: We start in the world of early Walt Disney animation, and this animated princess is thrown into Times Square, where she’s totally unequipped to deal with what happens, and the score kind of grows up with her as she begins to adapt to this world. Well, in the new version, she longs for that world. So, we still go back to those early [themes]—but there’s no ‘happily ever after’ in our world, unlike, an animated ending. So, she makes this wish, and that just throws us into this amazing storyline.”

“Stephen and I had the best time working together,” Menken added. “It’s our fourth movie together: Pocahontas, The Hunchback of Notre Dame, Enchanted, and now this.”

Shankman on why now is the right time for Disenchanted, and his own idea of “happily ever after”:

“Things were getting really complicated out in the world when we started all of this,” the director said. “There was just a lot of conflict going on, and it felt like it was a good time. The stars definitely aligned; the movie is coming out at the right time.”