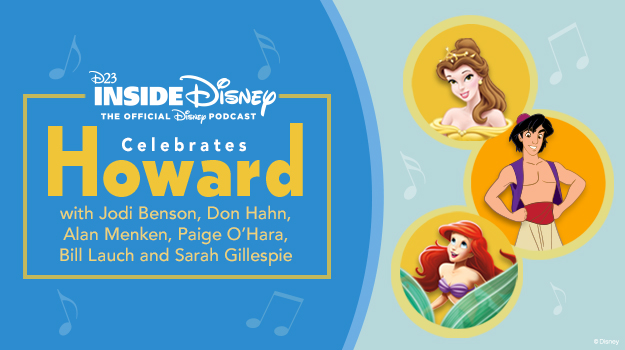 Join us for a special video edition of the D23 Inside Disney podcast, celebrating the beautiful, moving film Howard, an original documentary now streaming on Disney+. Howard tells the story of legendary lyricist—and Disney Legend—Howard Ashman, who penned for Disney the unforgettable lyrics to songs from The Little Mermaid, Beauty and the Beast, and Aladdin.

About the Film – Howard
Directed by Don Hahn (Beauty and the Beast), Howard is the untold story of Howard Ashman, the brilliant lyricist behind Disney classics like Aladdin, Beauty and the Beast, and The Little Mermaid and creator of musicals including Little Shop of Horrors. Featuring never-before-seen archival footage, personal films and photographs, as well as interviews with Howard’s friends and family, the film is an intimate look at the Disney Legend’s life, his creative drive, and the process behind the music. Spanning his childhood in Baltimore to his formative years in New York, Howard is an in-depth look at his journey to become the lyricist behind some of the most-beloved and well-known classic family films in the world.