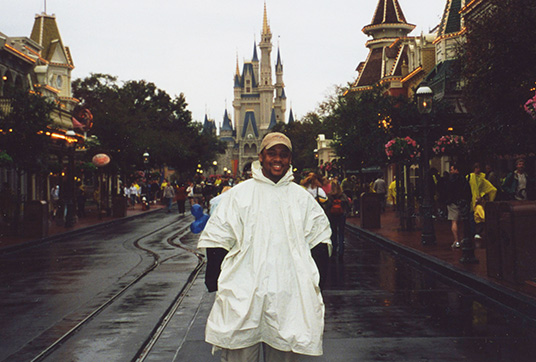 Morning broke blue and bright. The day shined like sunlight in a mirror.

But by afternoon, gray clouds darkened the sky, the thunder came rolling from the east, and down came the rain, pattering the pavement and driving guests for cover wherever they could find it.

It was a spring day in 2001, and Taye Shuayb was in the midst of his very first visit to Walt Disney World Resort. And like everyone else, he suddenly found himself scrambling for shelter from the rain. He found his way into a store on Main Street, U.S.A.—he doesn’t remember which—where he met a Walt Disney World cast member. It was one of those fleeting moments in life that happens in an instant and can be forgotten just as quickly. But for Taye, this one moment became a memory for life. “This cast member was so warm and welcoming,” he remembers. “She gave me a poncho and encouraged me to go back out there and enjoy my Disney experience. She didn’t want me to miss out on that magical moment we all have when we first visit Disney World. It was a little gesture, but it felt, for me, like a real big one, like a mother’s hug.”

That one small moment crystallized for Taye just how special the Disney experience is. “In that moment, I felt like I truly belonged there,” he says. “I grew up on the south side of Chicago, the son of two loving and hard-working parents who never really had the extra time to go someplace like Walt Disney World. I grew up watching and admiring Disney movies—and I connected with the great storytelling—but I never felt like Disney was a place for me. That trip inspired me to learn more about Walt Disney. I instantly connected to Walt’s journey as well as his dedication to creating memorable experiences for all Disney fans. From that point on I became a Disney fan for life!'”