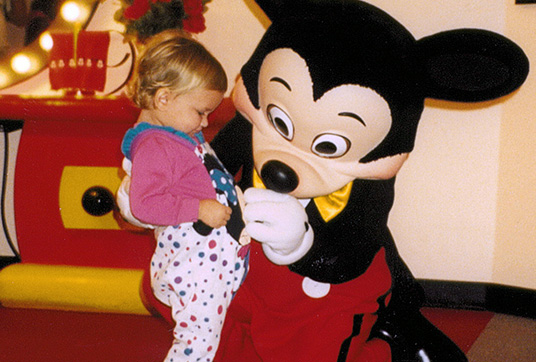 “The moment it all really started for me was when I visited Walt Disney World for the first time,” Stephanie Styles—currently touring across the U.S. as Katherine in Broadway’s Newsies on Tour—says. “I have pictures of me (a few months shy of two years old) meeting Mickey Mouse for the first time and proudly showing off my Minnie overalls—so proud to impress this mouse that held in his gloved hands so much importance to me as a small child. I still remember him wiggling his nose and hugging me tightly as we took our picture.”

Stephanie recently had the chance to visit Walt Disney World again when the Newsies tour found its way to Orlando’s Dr. Phillips Center for the Performing Arts. “I went in, just as usual, to [Magic Kingdom’s] Town Square, thinking I was just going to meet Mickey like normal… I always meet Mickey when I’m there,” she explains. “So I walk in—no one else is in there yet—and he turns around, and he starts talking to me. That’s something that in my 23 years of life, I’ve always wanted [to do], to have a conversation with him… and so I started sobbing. Mickey just held me, and put his little gloved hands on my back… I was a mess. I’ve been waiting to talk to this mouse for 23 years! I’m not only a huge fan and now his ’employee,’ but he’s also been a friend.”