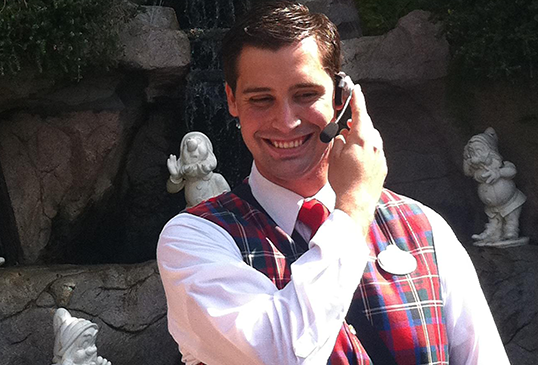 “There is one moment I remember, one beautiful, special, and emotional moment, that I’ve never forgotten and never will, one that will forever remind me of just how much I love all things Disney.

“I had been working at Disneyland for about four months when it came time to learn my second attraction, the Rafts to Tom Sawyer Island. This was a new experience for me since I was really just the transportation to the fun that was on the island. I decided that there had to be something I could do to have fun while transporting guests to and from the island. So I started encouraging everyone on the rafts to sing “Happy Birthday” to anyone on the raft wearing a birthday button. Usually this went pretty well; after all, they were a captive audience!

“One day, however, I saw a group of several women approaching the raft. They seemed to be having a great time, smiles all around, and the woman in the center of the group had a birthday button on. I finished loading the raft and shortly after we launched, I started the guests singing ‘Happy Birthday.’ The woman in the center of the group was noticeably surprised. She was on the far side of the raft and fairly well hidden from view by her friends. It wasn’t until the friend that was blocking my view of her moved that I discovered that she was crying. It was halfway through the song, halfway across the river, and I thought to myself, What have I done wrong? This has to be the end of my employment at Disneyland!

“I landed the raft—though I can’t remember how—and began unloading passengers. The group of women (who had been the last to get on and should have been the first to get off) had maneuvered themselves to the far side. They clearly wanted to be the last off. I began pleading with the Tiki gods, the Mansion ghosts, and anything else I could think of to have this guest yell at me and then just, let it go. No one had to know I had messed up, right?

“Well, she approached me and said, ‘I just want to thank you.’ I immediately began apologizing, which turned into rambling—when my reeling mind suddenly realized what she said. Dumbstruck, I merely, and rather inelegantly, blurted out, ‘What?’ Not my most eloquent moment, but she launched into her story anyway. She explained to me that she had been diagnosed with breast cancer and was told that she probably wouldn’t live to see this birthday. Now she was in remission, and her friends brought her to the happiest place on earth to celebrate her birthday and her achievement. In the middle of the day she boarded a raft and the entire park started to celebrate with her. She told me that it was a moment that she could never forget, and this was what life was for, celebrating.

“It was that moment that I realized that everyone who visits Disneyland does so for the same reasons. Whether as cast member or guest, we come together for brief moments in time to celebrate some truly special magic with friends we know from our favorite films and complete strangers— who may be better described as friends we haven’t yet met.”