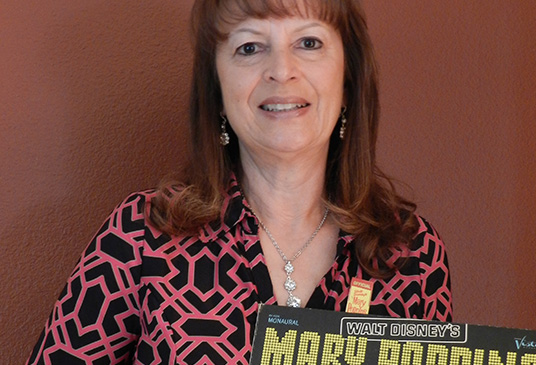 The La Reina theatre marquee still stands at 14622 Ventura Boulevard in Sherman Oaks, though this classic Los Angeles movie house closed its doors in the mid-1980s. Today it’s a relic from the past in the heart of one of LA’s most popular shopping districts—barely noticed by throngs of shoppers crowding the sidewalks. But for über Disney fan and D23 Member Debbie Burch, the place is hallowed ground—and always will be.

“It was August 1964, and Mary Poppins had just come out,” she remembers, “and my Dad took my mom and me to see the movie at the La Reina for my eighth birthday, which was in September. I was so excited. My dad told my mom and me to wait in line, while he went to buy the tickets. We waited and waited, the line started moving and… still no Dad!” Debbie says, still animated by the memory. Then she saw him coming toward them—no tickets in hand. “It was $2.50 a ticket, and back then, my Dad was used to paying one dollar to see two movies [Editor’s note: wonder what he’d say about ticket prices now]! “Well, of course, I did what any little girl would do at hearing this kind of news—I started crying hysterically! Mom didn’t seem too pleased, either. So, of course, Dad whirled around and made a beeline for the ticket office and bought three tickets!”

Debbie remembers every moment of that movie, and also recalls looking sideways from time to time toward her father to see if he was enjoying it—or begrudging the latest hit to the household budget. “That was the best part of it all for me, and when my love affair with Disney really began,” she says. “He was smiling the whole time, tapping his toes to the beat of those great songs. That movie, for me, symbolizes everything I love about Disney. Of course, I loved the movie, but I loved that my Dad did, too.” She adds that for the next month, he couldn’t stop talking about Mary Poppins. “He kept talking about the animation, the great songs, the Audio-Animatronics.” And for her birthday, she received, among other gifts, a copy of the book The Story of the Walt Disney Motion Picture Mary Poppins and the original Mary Poppins soundtrack album, both of which she kept and still cherishes.

“I went to the D23 Mary Poppins event last year, and I had Floyd Norman sign the book,” Debbie says. “It really felt like my father was standing there, somewhere behind my shoulder watching our story come full circle.”