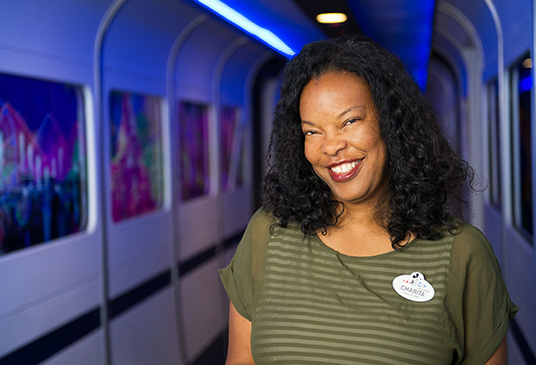 Charita Carter grew up as a self-described “air-force brat,” living for a time near Vandenburg Air Force Base near Lompoc, California. When she was 7 years old, her family made their first journey to Disneyland. “We were so excited to go,” she says. “For months, my siblings and I washed cars and did odd jobs around the house to save money to spend at Disneyland.”

When the family first walked through the ticket gates of The Happiest Place on Earth, her father surprised his wide-eyed kids with an unexpected gift—a crisp $20 bill for each them. Turns out this $20 supplement became a Carter family ritual that took place every four years or so when the family visited the park together—but, as it is for almost every family tradition, the first time is the one you remember most. “I’ll never forget that moment,” she says.

Over the years, Charita came to realize how much her dad loved Disneyland. “As a kid, you think your parents are taking you there because they have to,” she says. “But he loved it just as much as we did,” she says. Many years later, after Charita began working for Disney, she decided to take her parents to Disneyland. Only this time the Carter family tradition had a different twist. This time it was Charita’s turn to pull out a crisp $20 bill to hand to each of her parents.

“We sat there and had a good laugh about our family tradition,” Charita laughs. But as she strolled down Main Street, U.S.A. with her parents, she couldn’t help but think of her first visit to Disneyland—when a family tradition began and she first felt the magic of Disney.